A Missing Clavicle and An Educated Eye

Article by Darren Rousar. Most recently updated in March of 2020. 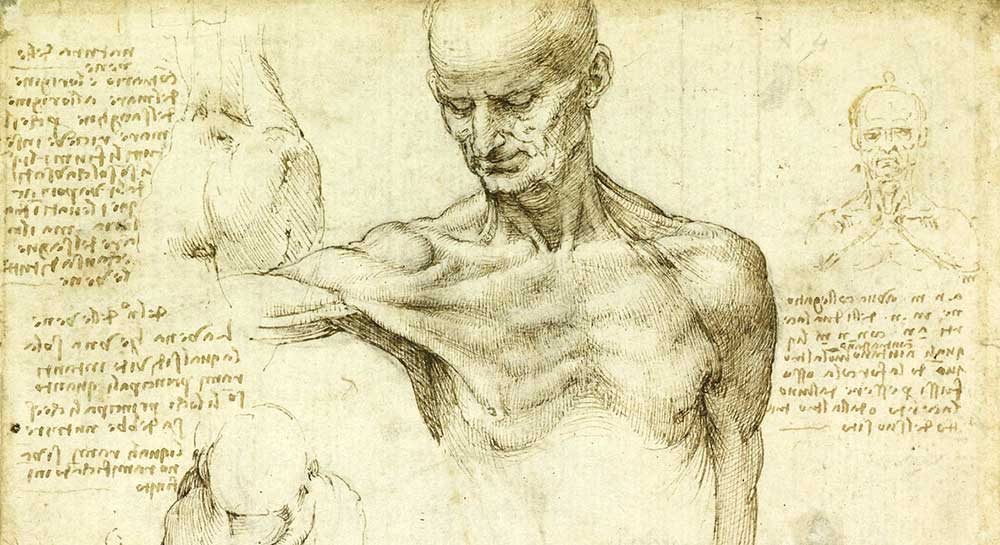 One of my private students once told me of an experience that he had which showed him how much our sight is influenced by what we know. Back in the early 70s he had attended a Canadian university. During one of his classes the professor explained how our perceptions are susceptible to both suggestion and to prior knowledge. His point was deeper than the typical discussion of optical illusions, however. Rather, he intended to show that what we intellectually learn can influence what we see (or think we see).

The professor’s lecture began with an overview how artists used medical anatomy. He also presented an analysis of Leonardo’s anatomical drawings of the human shoulder and arm.

Eventually, a male model was brought in and the discussion moved to the anatomy of the model’s right shoulder girdle. Students were shown the various anatomical landmarks that they ought to look for when drawing from life. Furthermore, under the lighting situation present on the model, one could see what the professor called a “classically-lit sphere” where the clavicle and sternum met. This “sphere” had a shadow, a beg-bug line, light and a highlight.

Once everyone understood, the professor carefully repositioned the model and draped some black cloth to reduce the amount of reflected light. This arrangement also had the effect of focusing the light on the model’s left shoulder, which was what the students were then directed to draw.

When the model session was complete, the professor went around and simply declared a “pass” or “fail” at each student’s easel. Only two students out of the entire class received a “pass.”

It seems that this particular model had an accident when he was young and doctors had to remove his left clavicle. In its place they put a small metal rod. Due to that injury and repair, the model’s sternoclavicular joint was lopsided and the bump where the clavicle met the scapula was missing.

Those that failed the test had drawn a missing clavicle.

To be sure, some of the students were as affected by the recent power of suggestion from the professor’s lecture as they were by their newfound knowledge of anatomy. Nonetheless, the story makes a powerful point, one that a number of nineteenth-century artists had made.

Modern painters made a mistake of showing that they know too much about the substances they paint . . . the artist ought to know nothing whatever about the nature of the object before him . . . but should concentrate all his powers on a representation of its appearance.1

That was quite the strong statement from Mr. Sargent! Of course, we have to remember the times and who his principle teacher was. Helpful as well is who both the teacher and his student idealized.

Sargent’s teacher was Carolus-Duran. He taught at a time when the visual impression was overtaking the idealism that had been promoted for decades at the École. One of his concerns was that teaching a student to draw via a system, as well as from what they intellectually knew, would inhibit the student’s ability to draw what they literally saw. However, it was not an issue of sight over knowledge. Instead, it was an issue of the order of learning.

Carolus-Duran believed that the student should first learn to see. Back in 1881 Carolus-Duran said: “Educate the eye before you educate the hand. The hand will become cunning soon enough when the eye has learned to see, whereas if the hand be educated before the eye one may never see.”

He was also obsessed with Velazquez, a focus he shared with at least one other contemporary atelier-head, Léon Bonnat. All three, Velazquez, Carolus-Duran and Bonnat, were what we now call optical painters.

Of Velazquez, Bonnat wrote, “He paints Nature as he sees her, and as she is.”2 This is a principle Bonnat tried to instill into his students as well. One of his American students, E. H. Blashfield, had this to say of his teacher: “He never taught how one should see, only to see.”3

So, how do you educate your eye and yet not remain ignorant of what you are looking at?

The answer, if you are intent upon drawing what you see, is as Carolus-Duran implies and the story of the missing clavicle proves. It is the order of learning that is important.

To be more specific, I often remind my students of my first introduction to Sight-Size. When I was 16 I took a class called, Artistic Anatomy. We spent most of each session drawing a live model, in Sight-Size. Only after we had some success in drawing what we saw, did the instructor, Annette LeSueur (a former student of Richard Lack’s), begin to discuss the anatomical aspects of the figure. We were always to see it first, then draw, then analyze what we were seeing. In that way our sight was sharpened because we looked first.

Edward Poynter, Nude bending over, and a skeleton in similar pose (detail), 1872.

There is no doubt that learning things like anatomy, construction, and all the other formulas for representing nature are immensely helpful in one’s quest to be an artist. This is especially true if you are intent upon learning to draw from your imagination. However, if you want to accurately draw and paint what you see, then you must first educate your eye. If you do not, when you are eventually confronted with a live model you may not only struggle with accuracy, you might end up representing what you do not even see – like a missing clavicle.