Beware of the Bed Bug Line! 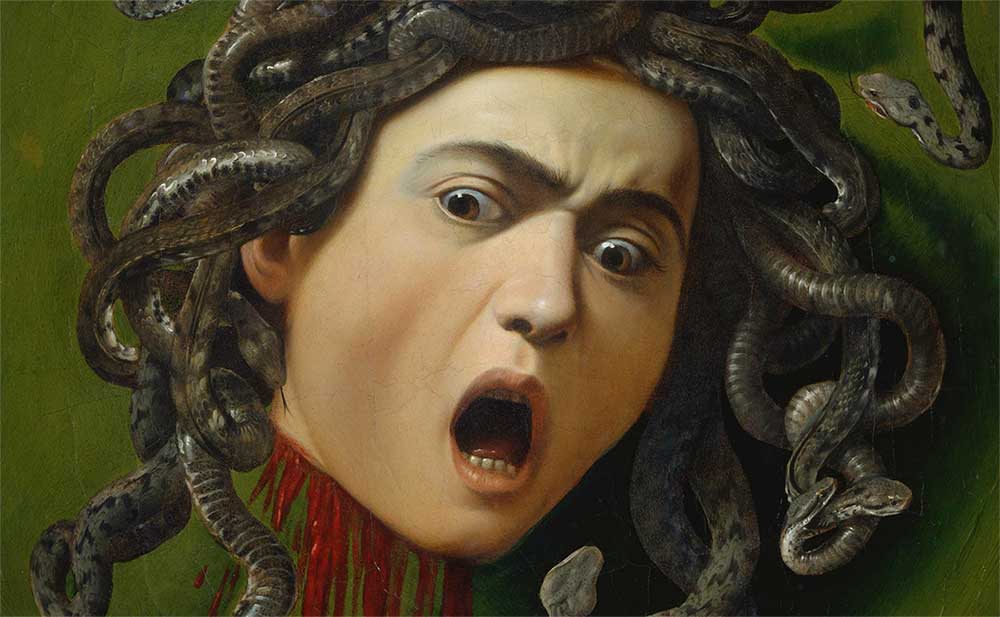 Detail of Caravaggio’s painting of Medusa. As an aside, this painting is actually done on a decorative shield rather than on a flat panel or canvas.

As was his habit, when Philip Leslie Hale left the classroom he declared, “Beware of the bedbug line!” The classroom in question was the cast drawing room at Boston’s Museum School, anytime between 1893 and 1931. The warning was meant to assure that his students never forgot to pay attention to the line which defines the division between the world of light and the world of shade.*

When cast drawing (and just about anything else), once you have drawn the arabesque or outline as accurately as you can it is time to begin to delineate the large division of light and shade. This division, which is really a visual edge, is variously called the Terminator, the Apelles Line, or the Shadow Line. I was taught to call it the Bedbug Line and in keeping with that tradition I will continue to use it here. Regardless of what you call it, how you manage that line will have great bearing on whether the viewer perceives depth in your drawing.

R. H. Ives Gammell, who was one of Hale’s students at Boston’s Museum School, explained the bedbug line as follows. Imagine an ideal sphere, classically lit, and a bedbug crawling from the shadow side to the light. The place on the sphere where the bedbug just begins to enter the light is the bedbug line. 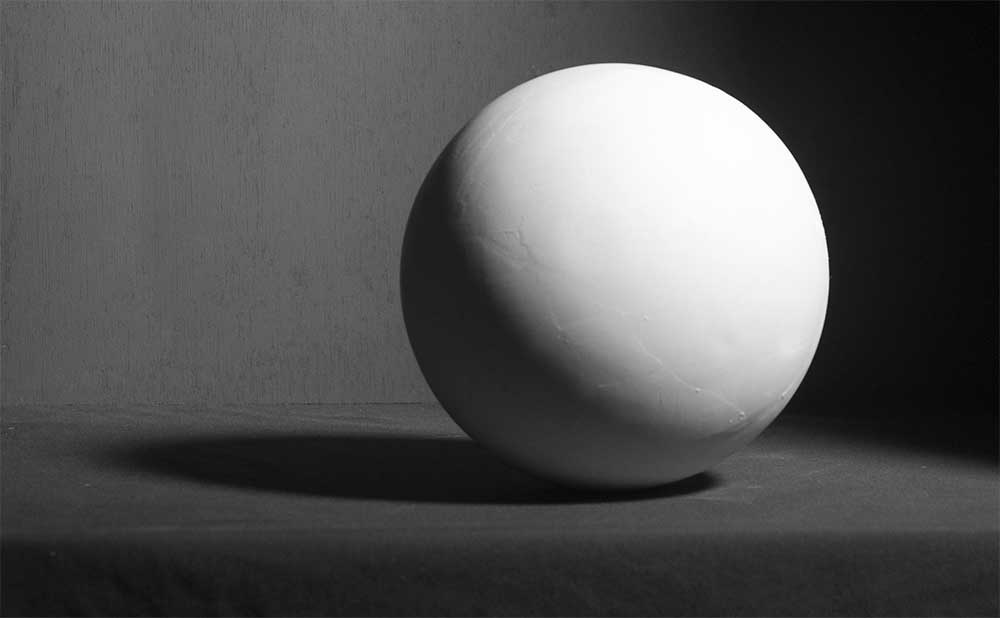 Perhaps the most obvious and common sphere to all of us is our moon. Below are some of Galileo’s drawings of it, from the year 1610. He used these drawings to prove that the moon was not a perfectly smooth sphere, and the proof was in the bed bug line. Notice how it reveals the height and depth of whatever mountains or valleys it crosses on the surface.

Three of Galileo’s sketches of the moon. 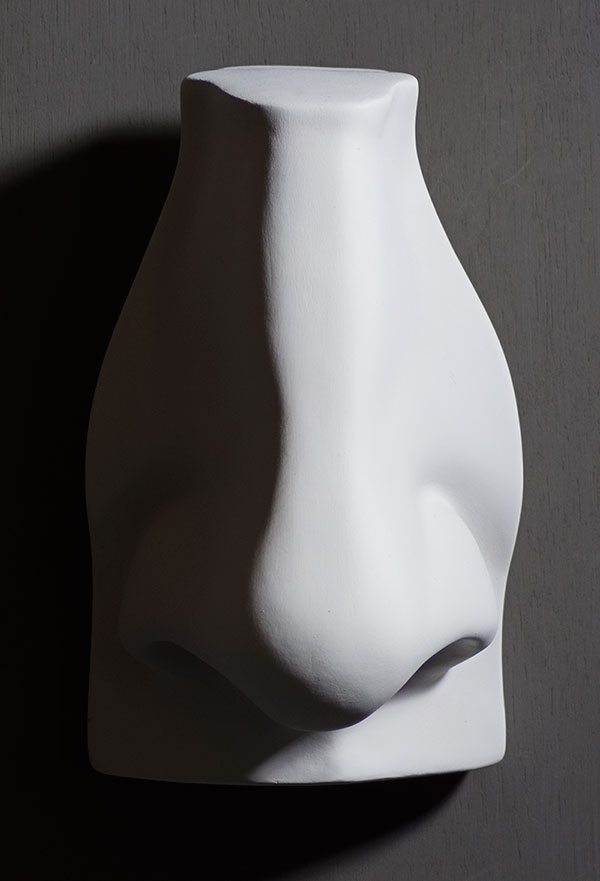 A plaster cast of the nose of Michelangelo’s David.
You can purchase one from Giust or from Andrea Felice at Felice Calchi.

Notice how, from the very top on down to the bottom, the bedbug line could be drawn as one continuous line. To correctly draw it you would follow the same approach as you would for the arabesque:

The bed bug line can be quite distinct, as you see in many places on the cast of the nose, as well as Galileo’s moons. In these cases the edge is called found or sharp. An indistinct bed bug line, like you see on the ideally lit sphere, would be considered lost or soft. Of course, not all edges are as uniform as the bedbug line is on that sphere. In fact, if the sphere was itself more ideal (smoother), you might see some slight variation in its edge as it neared the top and bottom.

Beginning students, and those who work from photographic sources, tend to make the bedbug line uniformly too sharp. More advanced students sometimes err in the other direction, especially if they are more concerned with what they know of light and shade as opposed to what they actually see in front of them.

On the photograph below you will see that I have marked the found edges of the bedbug line with green arrows and the lost edges with red arrows. Those areas in-between are, well, in between in terms of sharp and soft. 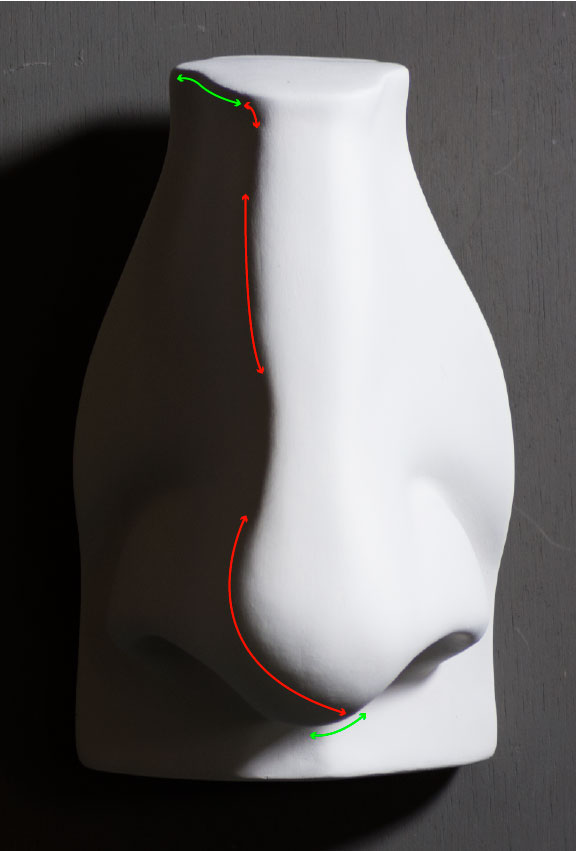 It should be noted before we go on that your perception of edges is not unlike your perception of value or color – all are relative. Therefore, your perception of the sharpness of that “found” edge near the top-most green arrow should be compared to the sharpest edge in the entire scene. In this case, that’s the lower, front edge of the philtrum. “Sharpest sharp and softest soft” as Gammell would have said. However, that’s another article.

But there’s a problem. The trouble is that very often the bedbug line, or some parts of it, may be so soft that you cannot make out exactly where the edge actually is. There are two solutions to this. The first way of finding the placement of a lost edge is to squint. This can sometimes work because squinting reduces your perception of small value differences. The result is that you will see large areas of simplified value shapes and this simplification may be just enough for you to make out the visual edge.

A more accurate way to find the actual edge is to walk up to the cast and use your charcoal to cast a shadow over the area in question. Generally speaking, shadow cannot be cast on shadow, so the bed bug line is where the cast shadow from your charcoal visibly ends. I show how to do this in the video below.

The first step is to stand in your viewing position and close one eye. Look at the lost edge in question and then walk right up to it. Next, using a stick of charcoal, cast a shadow across the edge. Again, since shadow cannot accept shadow, you will see the bed bug line where the charcoal’s shadow disappears into the cast’s shadow.

When you are finished with the drawing, how well you handled the bedbug line will in great measure determine how much depth the viewer thinks they are seeing. You should therefore take pains to place this line properly and beware of the bed bug line!

*A hat tip goes out to Tom Dunlay for providing me with this story.