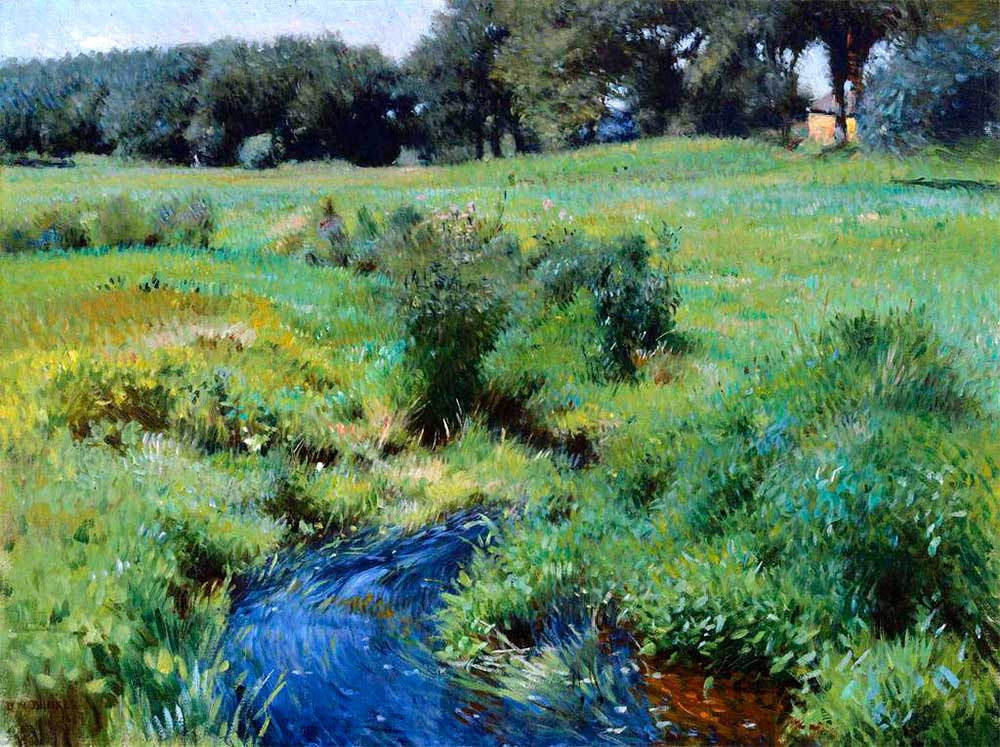 One of the first things beginning painters want to know is how to physically put paint on the canvas. There are many options: you might stroke it, dab it, or scrub it, etc. In a sense, your brush stroke is like your handwriting which differs with each individual. Such was the case with Bunker’s fishhooks.

Dennis Miller Bunker (1861–1890) was an American artist who studied under Jean-Léon Gérôme in Paris during the early 1880s. One might think that his training with Gérôme would have produced a strict academic painter but that was not the case. After his formal training Bunker’s style changed, in part due to his friendship with John Singer Sargent. The change was especially noticeable in his handling of paint when outdoors.

In both of Bunker’s early and late styles his sensitivity to form is what grounds his paintings. Undoubtably it was Gérôme who instilled that into Bunker, something which R. H. Ives Gammell felt many Impressionists lacked.1 Take a look at the landscape painting shown below. Bunker’s sense of form (what Gammell called draughtmanship) is clearly evident in this painting. 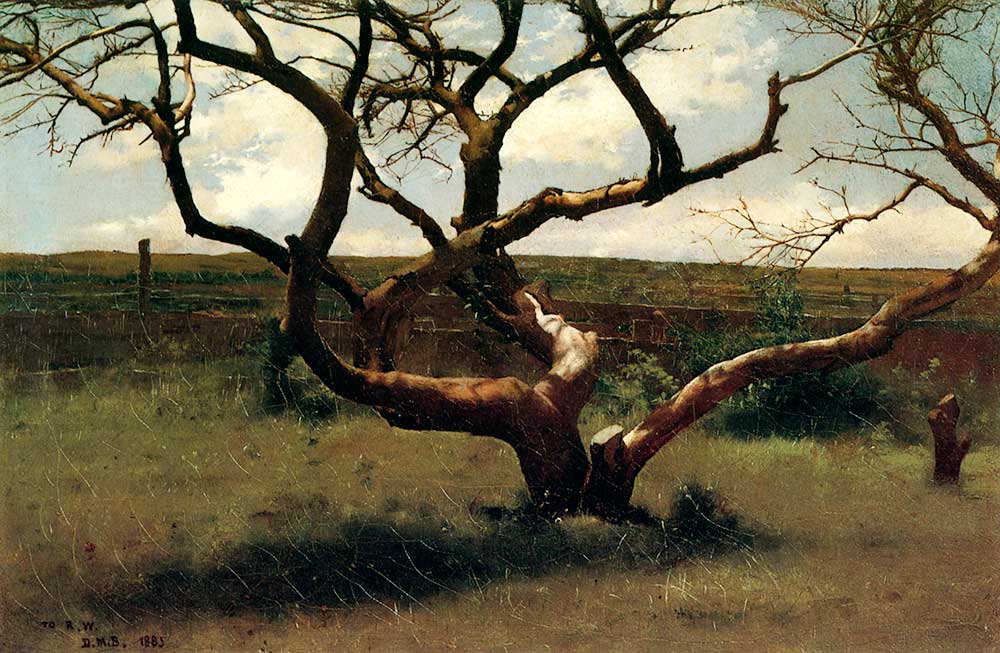 Although it was done from nature, Tree was painted when Bunker was still under the influence of the Bitumen School (which was another term for what we might nowadays call the brown school). In essence, those of the Bitumen School painted their landscapes in much the same way as they would paint a studio work. Doing that often meant intentionally (or ignorantly?) ignoring the color of outdoor light and the all-pervading blue hue from the sky.

Given what was happening in the art-world of Paris while he was a student, Bunker would have been aware of the Impressionists. However, the movement’s influence on him at the time is unclear. Notice that in the tree painting most passages are simplified and that few brush strokes are seen. Rather, broad swashes of opaque and stained color were left to represent the main forms. 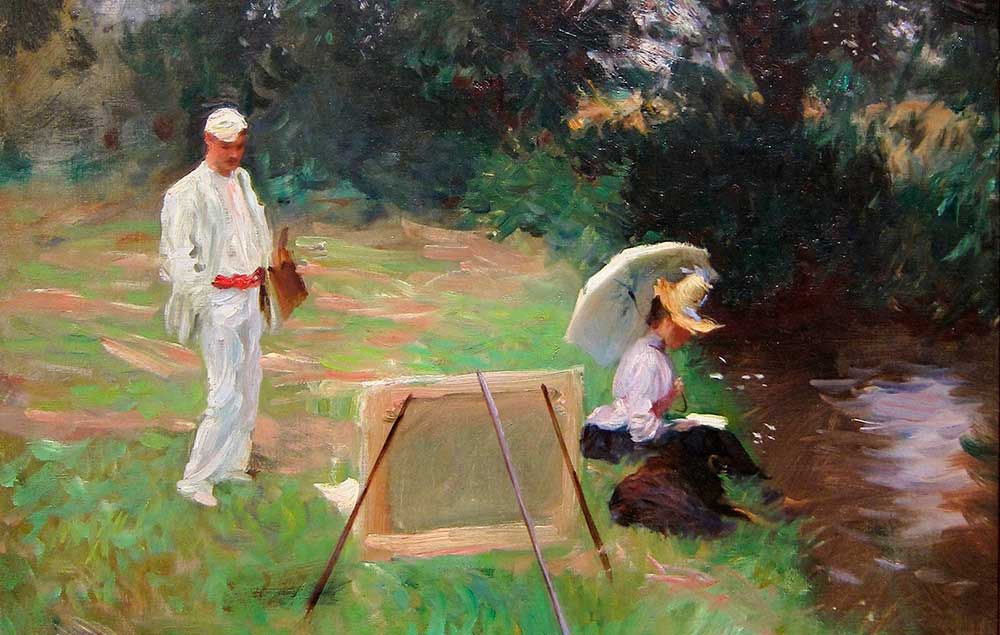 Eventually Bunker would become friends with, and a painting companion of, John Singer Sargent. Sargent had by this time been experimenting with Impressionist color and paint handling. Bunker also seems to have been influenced by the works of John Leslie Breck who is reputed to have been the first painter to bring Impressionism to America. Breck certainly understood outdoor light and how to use brush strokes to represent form.

In the summer of 1888 Bunker traveled to England to paint with Sargent. This was a few years after Sargent’s experience painting Carnation, Lily, Lily, Rose. Both artists were patronized by Isabella Stuart Gardner, a wealthy Boston philanthropist who helped Bunker make the trip.

Bunker returned to Boston with numerous paintings and a new style.

Take another look at the overall brownness in the tree painting and then compare it to The Pool, Medfield at the top of this article.

To get from paintings like Tree to those like The Pool, Medfield required an enormous amount of effort. According to letters he wrote to Mrs. Gardner at the time, he went through many failed paintings and more than a few ideas as to the correct approach to take when painting outdoors. He complained that he had “ruins of numerous works, for I’ve not been idle.”2

Part of his struggle was in how best to lay down the paint. It is the same struggle all landscape painters have. Does one paint the larger forms of a tree, its individual leaves, a combination of the two approaches, or in some other way entirely?

Frank Benson recalled how Edmund Tarbell had come to him saying, “Dennis Bunker is making them out of fishhooks these days,” referring to a type of brush-stroke that seemed very novel in Boston at the time.3

Below are a few detail images of The Pool, Medfield so you can see what Benson meant. Note that the shapes of the strokes are not much like a fishhook, but they are short and often curved. 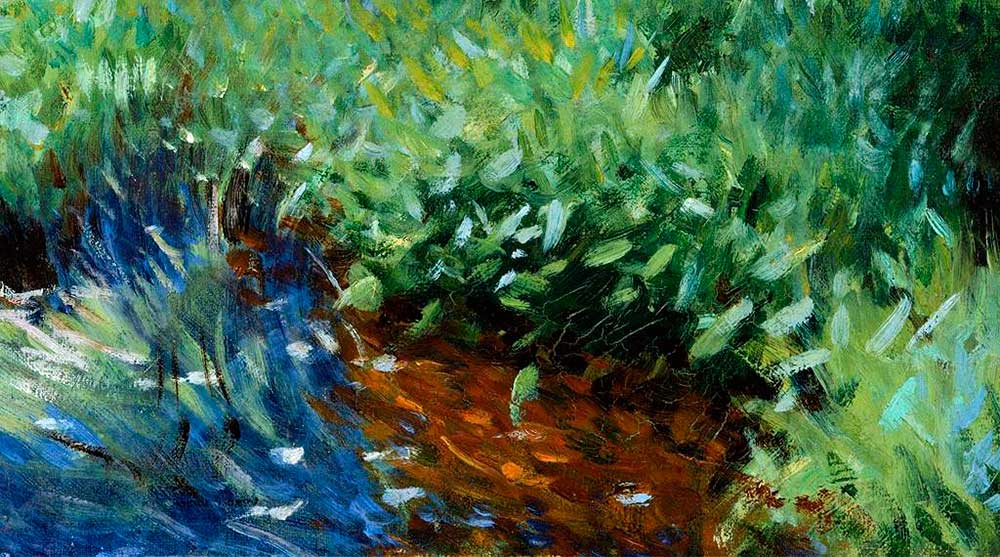 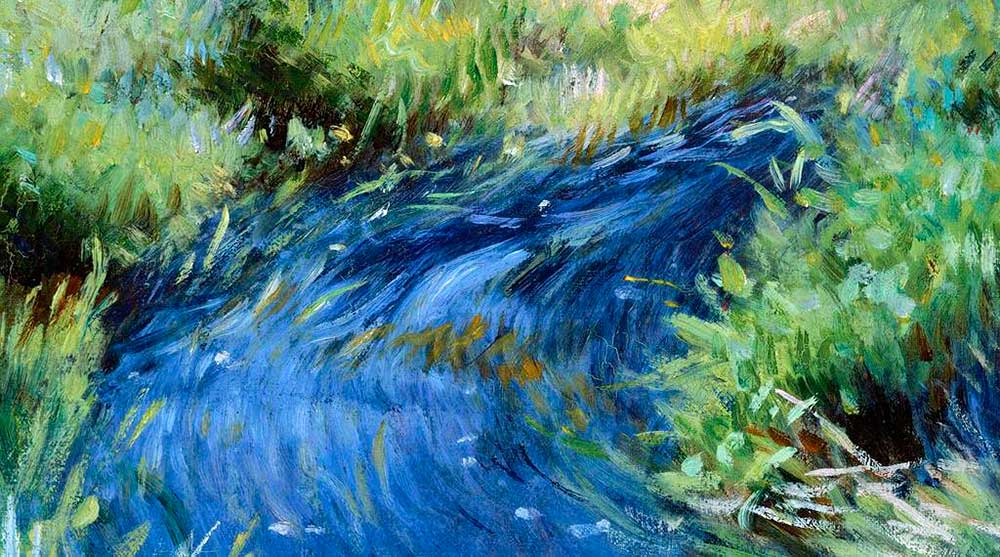 One of the paintings Bunker struggled with was of blooming flowers in the greenhouse at Green Hill (the Gardners’ summer residence in Brookline, Massachusetts). He first did a study of the scene, shown below. 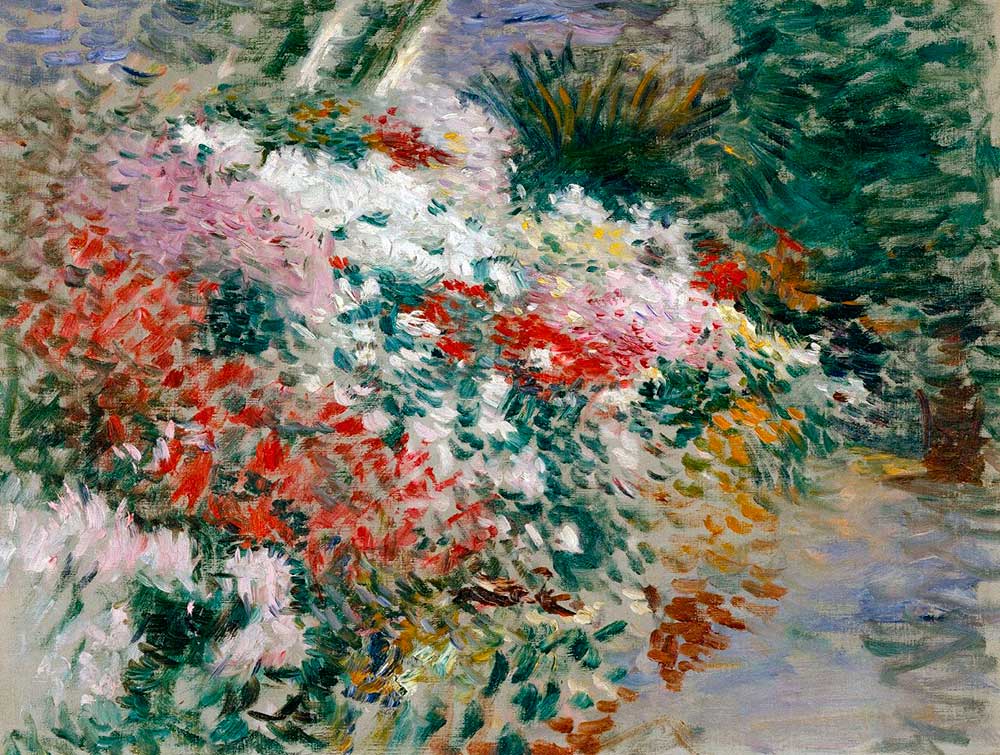 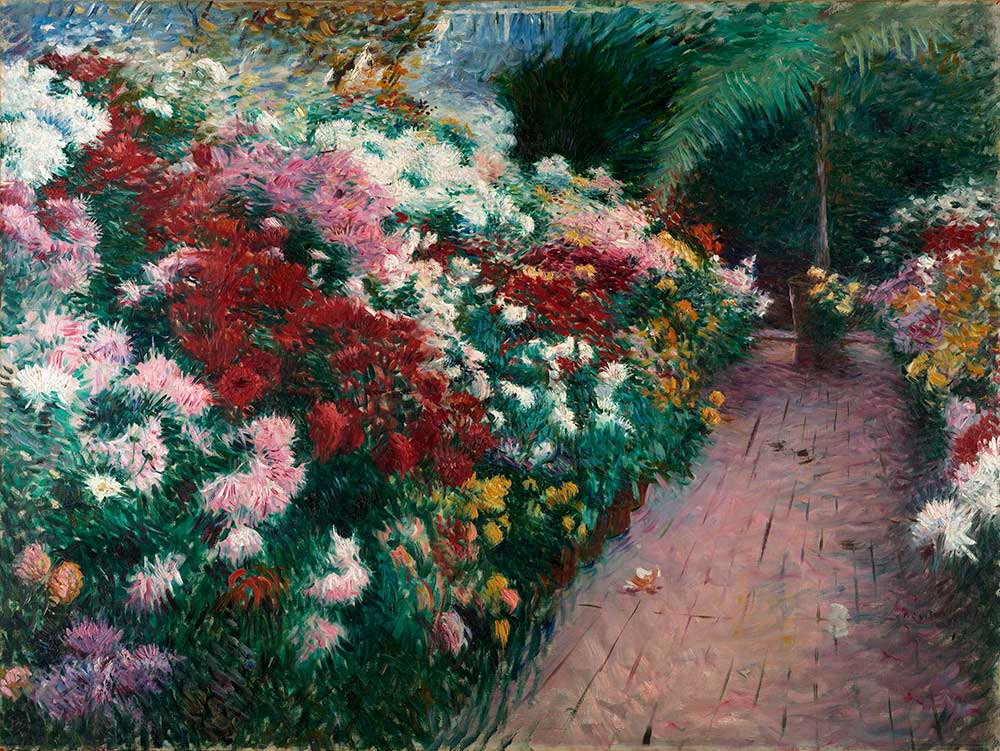 Bunker’s fishhooks represent the leaves and petals in the scene, but not every leaf and petal as a photo-realist might. Instead, they give the viewer an impression of the scene’s essential constituents.

So how did Bunker go about painting with his fishhooks? I’m glad you asked.

Reverse engineering the process of a painting’s creation is always problematic. When there is no written account by its creator or an eyewitness we’re left with conjecture. Fortunately, we have a few studies and unfinished paintings by Bunker from which to make educated guesses. And with those guesses in mind we can then take a closer look at some of his works. 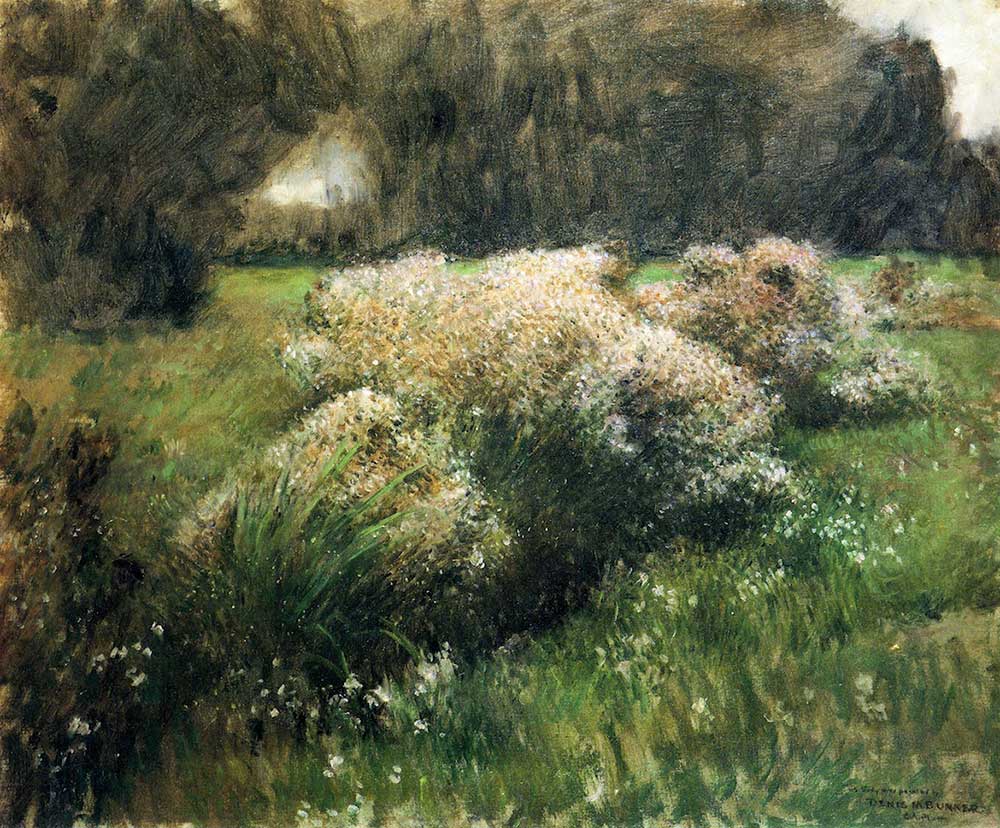 Below is detail of another painting, Marshland, Medfield. Though the painting is more finished, a close look reveals the same process as explained above. 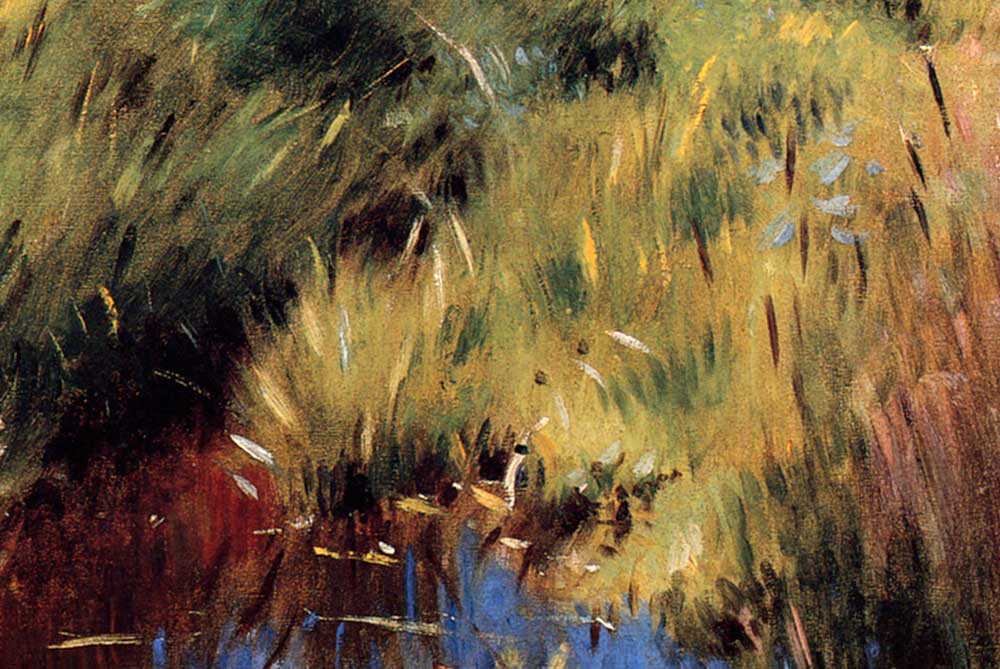 Conversely, his In the Greenhouse study does not appear to have been painted as described. Rather, it was done stroke-by-stroke. Chrysanthemums seems to have been done in that way as well.

Much more could be said about Bunker’s technique but I’ll leave it there for now. A sad ending to this story is that Bunker died from meningitis at the age of 29.

There are two essential books on Dennis Miller Bunker. One is by Gammell, who, by the way, was a student of William McGregor Paxton. Paxton, at age 18, won a scholarship to attend Cowles Art School in Boston. Bunker was Paxton’s teacher at Cowles. Gammell’s book is titled, Dennis Miller Bunker and it was published in 1953. Now and then Amazon will have used copies available. Gammell’s book is a must have for all artists who are interested in impressionistic seeing, regardless of what their preferred subject matter might be.

See also this article here and the series of articles beginning here.