Back in the mid 90s I taught alongside Charles Cecil at his atelier in Florence, Italy. The teaching pattern there followed that which I had previously experienced in my own education at various ateliers (Atelier Lack, Atelier LeSueur, and Studio Cecil-Graves). Students received critiques of their work 4 times per week. Beyond that, they were left to work on their projects by themselves.

Why am I telling you all this? Well, it is a fine system, but it can be a bit of a shock to beginners. So I’ve created something to help and I’ll tell you more about that shortly.

You’re On Your Own Kid (almost)

My first experience with cast drawing was similar to most students, except that I was a part-time student while still attending high school. Mr. Lack initially helped arrange my setup in Sight-Size. He then gave me a brief explanation of the approach and during the process did a short demonstration cast drawing start. After that, he left me on my own for the rest of the afternoon. Every other day he would critique my work, and as I reached another level he would give me more instruction.

Inevitably I had questions. Lots of them! And, as one might expect, Mr. Lack had to be elsewhere teaching other students. As often happens, older students pitched in to help out. In fact, as a more advanced student I naturally became one of the helpers.

But let’s get back to the story.

Despite the regularity of the program I wondered then if there was a better way. Not ‘better’ in the sense that the instruction was wrong and in need of improvement. Rather, ‘better’ in a way that might more frequently help an often lost student. It’s a question I pondered all through my own training as well as in my teaching career.

The answer is Cast Drawing in Sight-Size: An Atelier Manual. It’s more than a rewrite of my previous books. Instead, it’s a newly written, 140 page manual that uses aspects of three cast drawings and follows the entire process of one to fully explain Sight-Size cast drawing.

Cast Drawing in Sight-Size: An Atelier Manual is the atelier manual I wish I had when I was a student.

This book is the perfect supplement to your training, whether you’re attending an atelier or learning on your own. It’s there when your teacher cannot be. 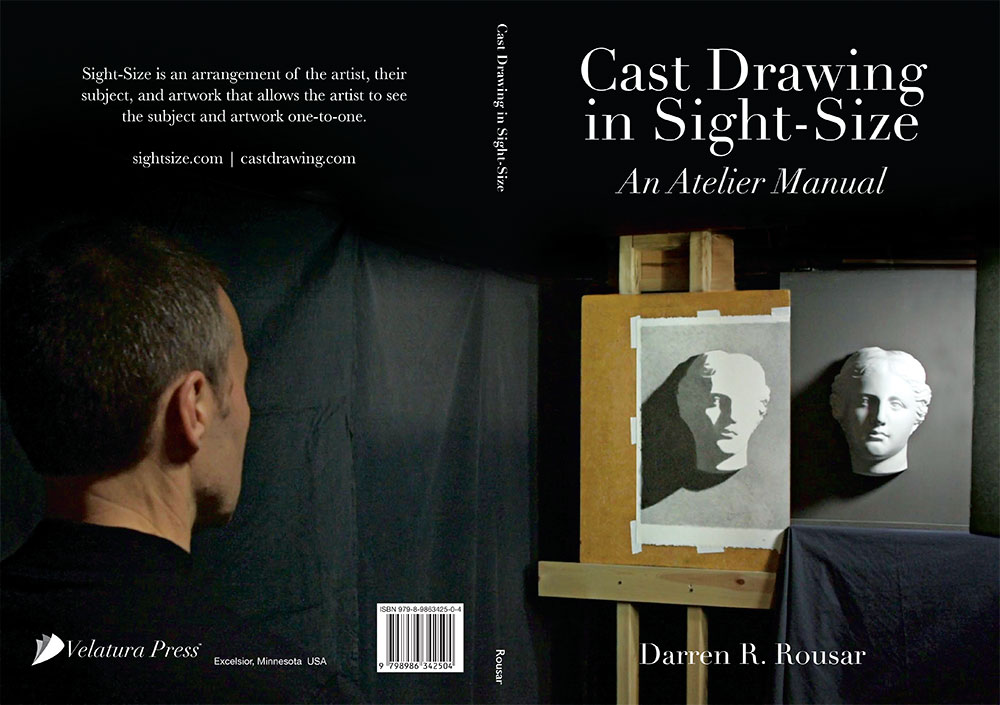 The back and front cover for Cast Drawing in Sight-Size: An Atelier Manual.

The instruction begins with the cover (shown above). The single image of the full back-to-front cover is itself a lesson in Sight-Size. You’ll notice the arrangement of the drawing and the cast. They’re physically side-by-side, but more importantly they’re visually side-by-side as seen from a distant vantage point. Due to that arrangement, the cast and the drawing of it are visually the same size. That’s me, on the left (back cover), viewing the setup from the distant vantage point. It’s clear in the photo that all seeing must take place from that point.

The book opens with short discussions of the benefits of cast drawing in Sight-Size, as well as a brief history of the Sight-Size approach to drawing and painting. It then turns to the practical matters of the necessary materials, selecting a cast, setting up your arrangement, and how to see and critique your own work. Ample time is also given to all aspects of visual and mechanical measurement.

Each of those subjects are important to understand before you ever pick up a stick of charcoal. 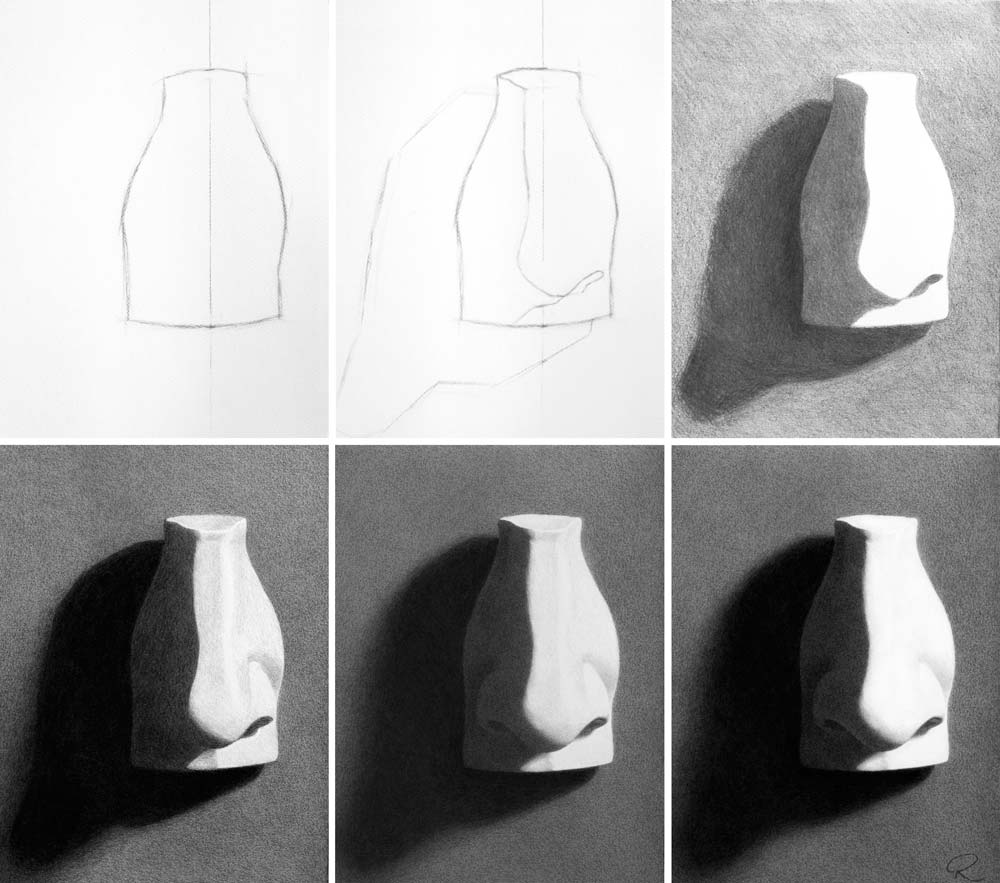 The remaining half of Cast Drawing in Sight-Size: An Atelier Manual takes you through the step-by-step process of cast drawing in Sight-Size. The general outline of that process is below. There are six stages, though there are reasons to expand or contract some of them.

Given the depth of the material covered, Cast Drawing in Sight-Size: An Atelier Manual will benefit atelier students at all stages of their training – even those who are beyond cast drawing. Why? Because the principles learned through cast drawing are meant as guides for all subjects. The book serves as a constant reminder of the basics; a touchstone to keep you on the correct path.

Cast Drawing in Sight-Size: An Atelier Manual is available both as a paperback book from Amazon and Barnes & Noble, and as a PDF eBook.

As mentioned, Cast Drawing in Sight-Size: An Atelier Manual is also perfect for those learning on their own. However, learning how to see and draw while relying solely on written explanations in a book has its drawbacks. To solve that problem in a cost effective way I have recut the video content from the Sight-Size Cast Drawing course that was over on Atelier Rousar | online into a stand-alone á la carte mini-course.

You can purchase the á la carte course here. Plus, you’ll get the PDF eBook of Cast Drawing in Sight-Size: An Atelier Manual as a free bonus to the á la carte videos.