Article by Darren Rousar. Most recently updated in January of 2022.

Movement is one of the most challenging elements students encounter when graduating from still life to portraits. Whether they’ve conquered it or not is best seen in how the eyes in their drawing work together. Often they don’t, and just as often the error is so slight that the student fails to see it. The solution is to stop chasing the distant eye.

We can simplify portraits into three general orientations: frontal, turned, and profile. Chasing the distant eye is obviously not an issue with a profile pose. But the frontal and turned orientations present increasing levels of difficulty, especially when the pose is between 3/4 and 7/8 turned.

Adding to the difficulty is when the model’s head is not only turned, but tilted as well.

Most know that one side of their face is smaller than the other. While there are biological reasons for that, the fact presents us with a visual problem.

In a frontal view you can imagine a central, vertical line running through the nose. On each side is an eye. Each eye is seemingly a mirror image of the other, except for the facts that one is slightly lower, and neither are the same size.

Each eye is also at an angle (called a canthal tilt), and oftentimes not at an exact mirror image of its counterpart.

Those aspects of asymmetry are one reason why capturing a likeness using construction formulas is problematic. Likeness cannot be found in a formula. Rather, it is found in precise deviations from it.

Details from plate 8, Encyclopédie of Diderot and D’Alembert (1759).
Notice, in the 7/8th view (fig. 7), how the distant eye does not work in concert with the near eye.

As the Head Turns

Again, in a frontal view, your perception of how the eyes deviate from each other is fairly obvious.

More problematic is what happens to your perception of the canthal tilts of each eye as the head turns. What starts out as a fairly shallow angle can become more steep or shallow, depending upon the starting angle and the direction the head turns.

The error is more obviously seen in the animation shown below.

Failing to accurately see all this often results in the distant eye and side of the head appearing too far forward, as if it was drawn when the model was in a more front-facing pose.

And it probably was.

Many contemporary examples of the problem come across our social media feeds. But don’t feel too bad. Here’s a quick sketch that shows even the great Leonardo wasn’t immune to the problem. 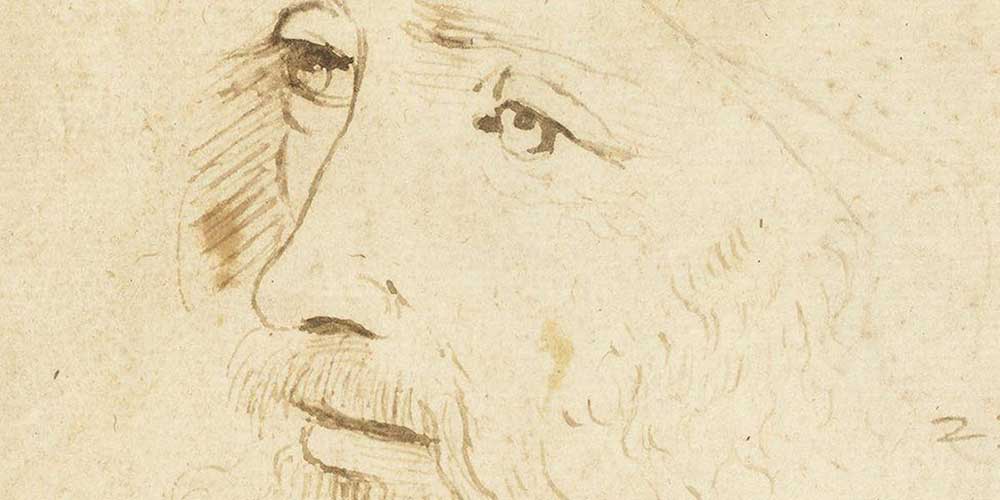 A sketch, attributed to Leonardo.

The detail below, of another painting by Dante Gabriel Rossetti, is a more subtle example.

All living models move, no matter how still they think they are being. Respiration moves them. Their heads tend to move to the direction of their eyes’ gaze. Model-breaks result in slightly different poses.

You, as the artist, move too.

With all those angle changes, size shifts, and moving going on, what’s an artist to do?

The best advice is to establish a baseline and stop chasing the distant eye.

Once you’ve decided on a pose, make a note (mental or otherwise) about the placement and shapes of both eyes. Pay special attention to how they relate to each other. Then, do your best to draw both eyes at the same time.

After making a mark for one eye, make the corresponding mark for the other. And so on. That way both eyes will appear to work together, as if they are focusing on the same spot. The angles of their lids, brows, and sockets will relate as they should – as you saw them in a single glance – as opposed to a collection of separate, piecemeal observations.

Another help is to accurately draw the nose-cheek triangle. You can see them outlined in black on the faded images below.

Every time your model returns from a break re-pose them relative your drawing of the canthus tilts and nose-cheek triangle. And do the same again, every time they drift out of pose.

Other helps are to frequently use your mirror and flicking.

Earlier I mentioned that drawing via formula all but assures that you’ll fail at capturing a likeness. Better is to train your eye to see, and to see the whole (also called the big-look).

That’s one of the advantages of cast drawing in Sight-Size. It teaches you to accurately see, and a key part of doing that is seeing the whole.

Do it well and you’ll automatically stop chasing the distant eye.

An additional help to stop you from chasing the distant eye is a well-developed visual memory. You can find out more about that in a companion article titled Both Sides Now, which is over on the Memory Drawing site.