Darren R. Rousar, working on the painting, The Holy Family.

Darren R. Rousar began studying representational art at age 16 with Annette LeSueur. He then studied privately with Richard Lack, at Atelier Lack, and after high school attended Atelier LeSueur. After four years at Atelier LeSueur he spent a year at Studio Cecil-Graves in Florence, Italy. He has taught students how to see using Sight-Size for over 30 years, in three countries, to students who range in ages from 8 to their mid-80s. Darren is the author of nine books, seven of which are based on Sight-Size. He is also the creator of this website.

My first exposure to Sight-Size came in 1980, when I was 16 years old. I had run through all of the available art classes at my high school and the teacher recommended me for a special, off-campus program. I was allowed to take any course at the local art center, on the school’s dime and during school hours.

The course I chose was Artistic Anatomy, run by Annette LeSueur, who was a student of Richard Lack. In reality, the course was a three level introduction to Sight-Size, figure drawing and anatomy.

Class began with basic instruction in Sight-Size figure drawing while in front of the live model. This was followed by an hour and a half working on a pencil drawing, still in front of the model.

After the session, Annette gave a lecture on anatomy. For homework, we were to begin a skeletal anatomy tracing over our figure drawing. As I recall, we spent four weeks on that drawing, and in the end we had also completed a muscle overlay in addition to the skeletal. Numerous other Sight-Size figures followed, along with their attendant anatomical overlays.

Annette was my introduction, not only to Sight-Size, but also to Richard Lack. He agreed to take me on as a private student. I would go on to spend two to three afternoons a week at his atelier, under his tutelage, learning how to see via Sight-Size cast drawing. That was in 1981 and ’82.

When I studied with Mr. Lack, he believed that starts were important. Therefore, he had me begin numerous cast drawings and did not allow me to bring the majority of them to a tighter finish. The drawings below represent some of those starts. I do not recall working more than a couple sessions on each of those drawings.

Mr. Lack has now passed, but he has a multitude of former students who owe him a great debt. You can read more about him in this article over here.

After high school (and a year at commercial art school) I sought out Annette and learned that she had opened her own atelier. I spent four years there, being taught by her and the numerous, former Lack students who passed through her school as teachers. David Erickson and Jeffrey Larson were two of them.

Most of our projects were done in Sight-Size, including casts, pencil and charcoal figure drawing, painted figures, still life, portraits, and interiors. We spent a lot of time on anatomy, going so far as to participate in a dissection of a cadaver at a local chiropractic college. We also did a fair amount of portrait and figure drawing via Comparative Measuring. Night classes at Atelier Lack filled in whatever gaps I might have had at the time.

In this photo you can see me working on a study, in Sight-Size, for a larger painting.

After Annette’s I went on my own grand tour of Europe. That trip ultimately led me to Florence, Italy and Studio Cecil-Graves.

Charles H. Cecil is a former student of both R.H. Ives Gammell and Richard Lack. Daniel Graves is a former student of Nerina Simi and Richard Lack. These two Americans teamed up in the early eighties to found Studio Cecil-Graves. The atelier was based off of principles they learned from their teachers. One of those was Sight-Size. Another was using traditional materials, though that’s a story for a different version of my autobiography.

I studied with Charles and Dan during 1989 and 1990. Shortly after I left Florence, they split. Charles went on to found Charles H. Cecil Studios (where, in 1995 and 1996 I would serve as Assistant Director). Dan created the Florence Academy of Art. Both institutions are still going strong and both still base their instruction on Sight-Size.

In this photo I am working on a Sight-Size study for the painting, Porta Croce.

Skipping ahead a little more than a decade, I decided that Sight-Size needed a book. As with anything else that is passed from master to student, if the tradition is not written down the story gets changed. So I consulted Richard Lack, Charles Cecil, other former Gammell students I knew, and the copious notes I had taken during my various atelier experiences. The result was my first book, Cast Drawing Using the Sight-Size Approach. Sight-Size and the Art of Seeing, its companion DVD, followed shortly thereafter. Two years later I wrote and released the follow up book, Cast Painting Using the Sight-Size Approach. Both books as well as the DVD are now long out of print.

Along with the books and DVD I setup this website. In its current form it has over 100 articles relevant to Sight-Size with more being written on a semi-regular basis.

Throughout my own atelier training the benefits of a trained visual memory was impressed upon me. So in 2013 I wrote and released the book Memory Drawing: Perceptual Training and Recall (wonderfully edited by Linda Crank). You can learn all about training your visual memory from that book. There is also an extensive website here.

Like memory drawing, another skill that’s sorely lacking in the atelier community is eye accuracy training. Most students get that training through cast and figure drawing. But that’s not nearly enough. To solve the problem, in early 2016 I published An Accurate Eye, an eBook containing progressive eye training exercises that I’ve given to my students.

The aforementioned materials have been used in numerous ateliers, academies and art schools, worldwide. Equally important is that I am honored to have been able to help over ten thousand individuals learn to see through Sight-Size.

Back in 2017 the Swedish edition of the Epoch Times asked to republish a number of my articles from this site for their newspaper.

In 2018 I opened an online atelier (Atelier Rousar | online) and offered a couple of cast drawing courses. Then, in 2019, I added a memory drawing course to the atelier’s lineup. Although enrollment goes well, keeping up with the time and technical aspects required to maintain a course site has been an ongoing challenge. Therefore, changes are underway.

Although the Sight-Size site is all Sight-Size all the time, fully trained artists know that the ability to scale is important as well. Once your eye is accurately trained to see through Sight-Size, scaling is a simple matter. However, distinct and progressive training to scale is of great benefit to students. In 2021 I released the eBook, A Comparative Eye, to provide that training. 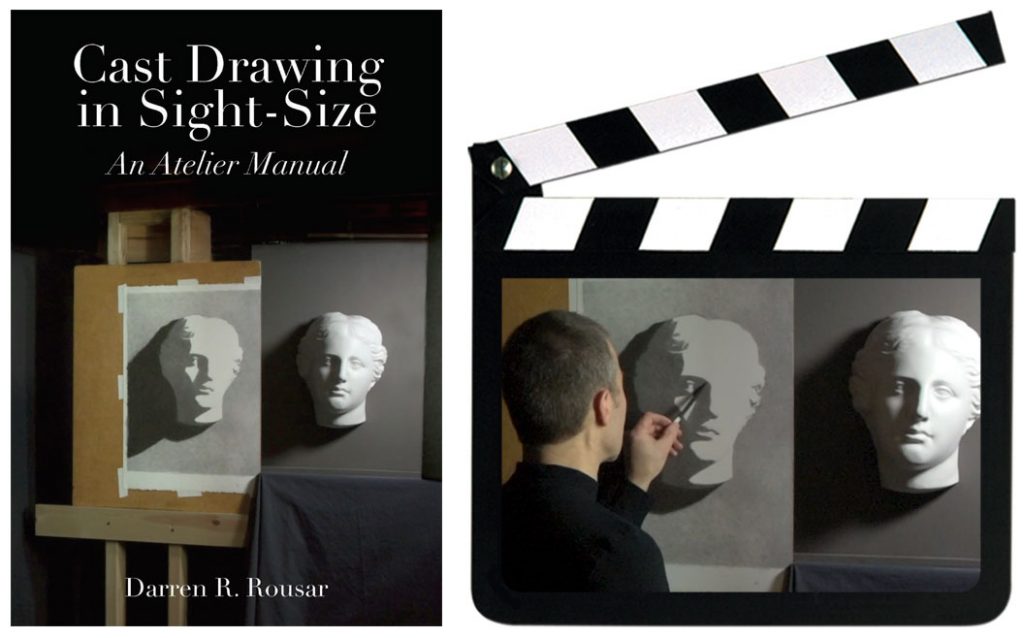 Anticipating the changes to Atelier Rousar course site, in mid-2022 I recut the cast drawing videos to make them available outside of the online course format – and at a much lower price. Those videos are available here. Concurrent with the release of the videos, I adapted the textual and photographic content of the course into a book. That book, Cast Drawing in Sight-Size: An Atelier Manual is available in paperback from all online booksellers (Amazon here), and an eBook is here. That eBook, by the way, is also a bonus that comes along with the course videos.

In late 2022 I released a free guide called Drawing with Confidence. The guide is intended to help those who are afraid to draw because they think it’s too difficult to draw what they see. The link to that is below this article.

Since my second year at Atelier LeSueur I have always taught. Often, that teaching was cast drawing, though I have also taught all of the other common atelier subjects. Regardless of the subject, Sight-Size remains the backbone of my teaching because I believe that to draw, paint, or sculpt well, one must first learn to see. Sight-Size is the best way to do that.