Article by Darren Rousar. Most recently updated in March of 2021. 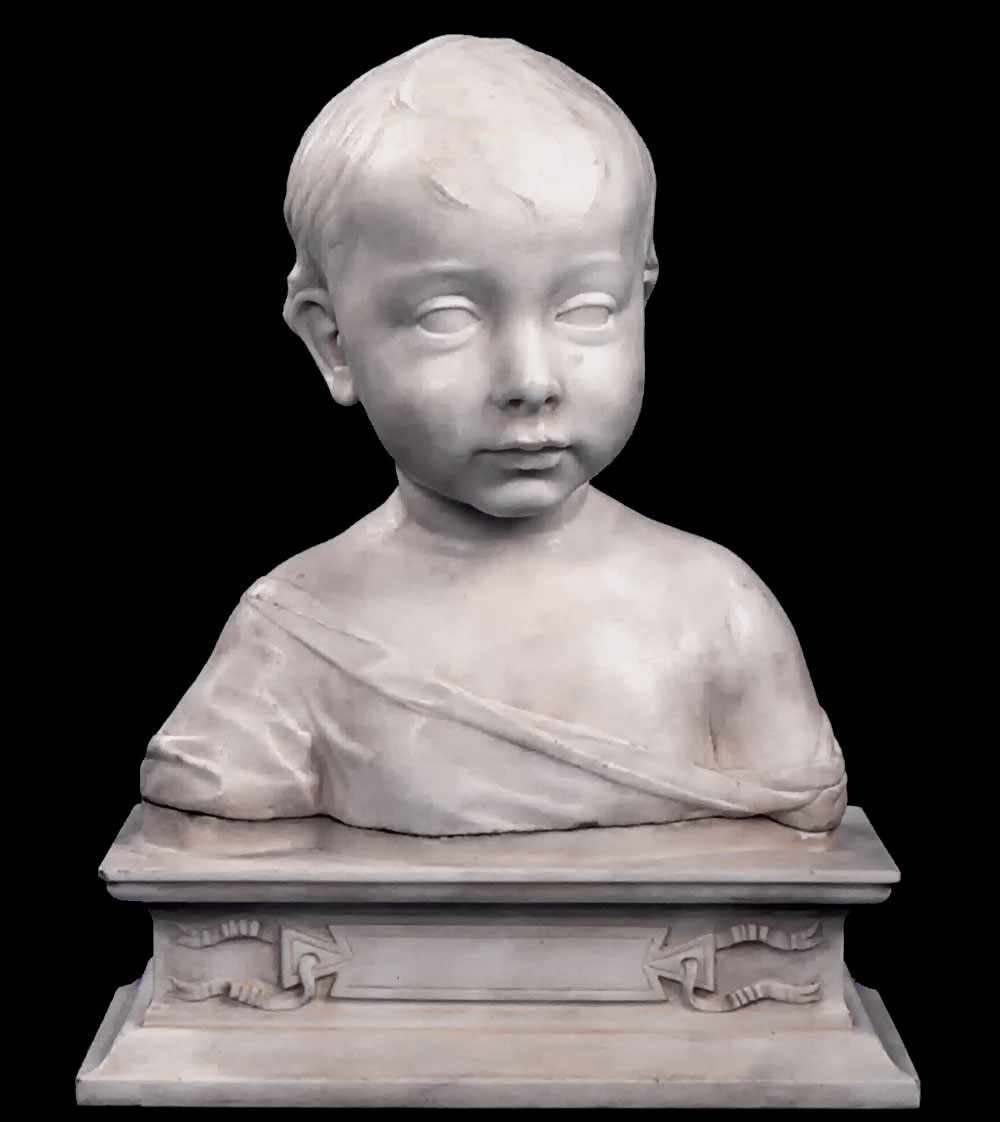 One of the things I did before writing Cast Drawing Using the Sight-Size Approach* was to research some of the methods for teaching cast drawing outside of Gammell’s lineage. Rather than let the unused fruits of that research go to waste, I present some of it here. Below is a compilation of a series of articles which were published in 1901. I have edited them so that they read as one.

BLOCK FORMS: It is well for the beginner to select the simplest cast, for example, a block hand or foot, and confine the first morning’s work to studying the outline of the cast as it comes against the background, the big, simple shape of the thing, the direction of the lines, and the forms of the shadows and the lights. Look for proportion and if you are in doubt about it hold your charcoal or brush at arm’s length and measure until you are absolutely sure of a few points and the rest will conform to them with little difficulty. Work with as much freedom as possible and hold the charcoal tightly that you may get vigor in your work.

VALUES: Observe how decided the contrast is between the light and shade, and do not see more than two values in the shadows, i.e., two degrees of shade. When you come to try a cast in the round you will find that this same rule will hold good. The influence of making studies of this kind is felt all through one’s later work. The tendency of most students is to see too much and a great deal of time is spent taking out what one has already done. Make your drawing the same size as the cast and make it look like the cast in the simplest and most direct way possible. Use soft charcoal in beginning a drawing. For taking out the lights use the kneaded rubber which is sold in most art stores. It is well to dust off your first rough drawing, leaving the faint impression, which is very desirable to work over. For softening and blending the shadows use your finger lightly and finish with the point of a hard piece of charcoal. 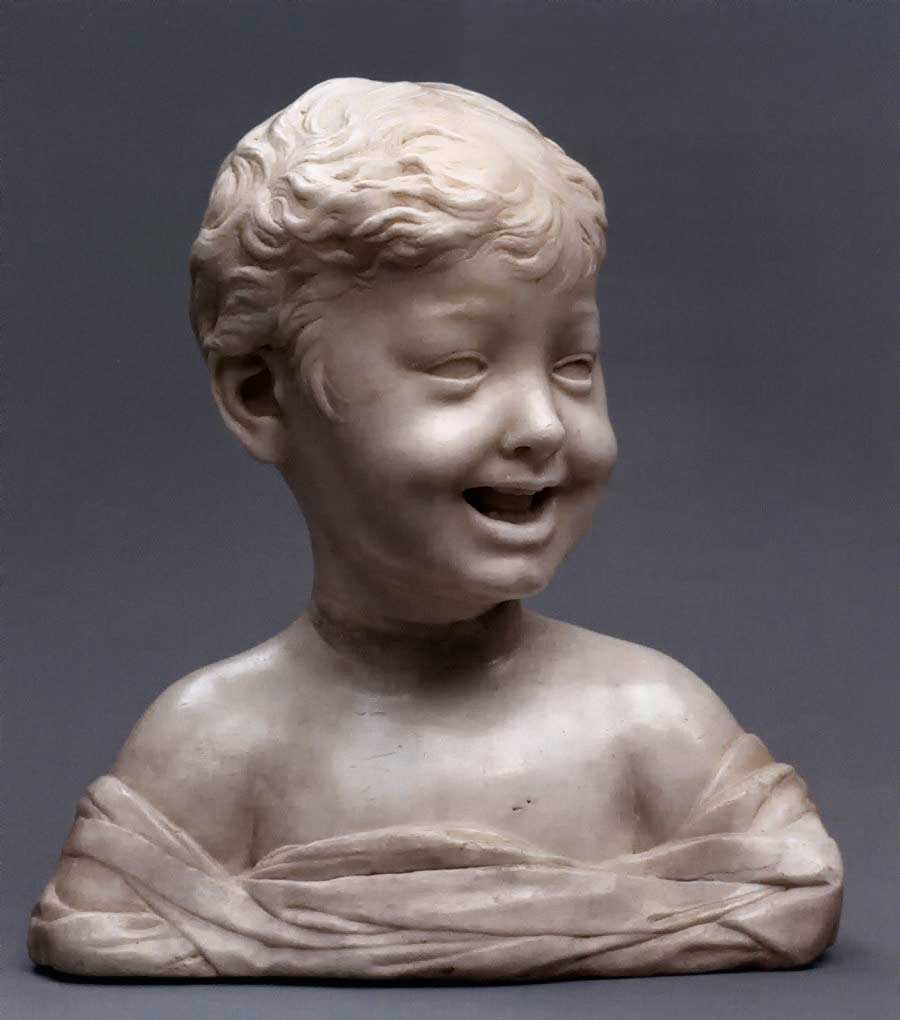 After having devoted sufficient time to studying block forms as suggested, you may begin on the round or natural forms. Take for example the head of the Laughing Boy (seen above) and begin by suggesting the cast in its most simple form. Half close your eyes and separate the big light from the big dark. Outline the shadows and mass them in with a soft piece of charcoal keeping the tone flat and simple. Already the character if the head begins to be apparent.

Now study well the proportions and construction before putting in any detail. Dust off your drawing lightly with a cloth and begin again with a harder piece of charcoal to work for the shadows and the half-tones. Keep in mind the simple light and the simple dark and do not see too much detail, especially in the shadows. Endeavor to use your charcoal as freely as possible and avoid getting your outlines hard and dry.

It is well to work at arm’s length from your paper stepping back now and then to view your work from a distance. Look quickly from your drawing to the cast several times and vice versa, taking in the thing as a whole and you will in this way be able to detect any error that there may be in the drawing.** Turn the cast around and draw it in the profile and in as many positions as you like. You will find that will grow more interesting as you proceed. You will soon be ready to try something from a full length cast.

Much importance should be given to the simplicity of line and form and students are advised not to carry the drawing too far, to see only the most important lines and broadest shadows and to let the details take care of themselves.

If the student will follow out the same method in looking for the half-tones that one does in putting in the bigger masses of shadow in the first hour’s work, he will soon find that the drawing will begin to take a subtle form and that the detail will be suggested.

Draw things as you see them. For example, in drawing an eye or an ear draw the shadows that the eye and ear present and not mere lines that mean nothing and do not exist in the cast.

Study the characteristic shape of each half-tone and do not be tempted to round and soften the edges too much. Notice the forms of the shadows about the cast and you will perceive that each separate mass has a discernable [sic] shape that goes to make up the whole.

“Hasten slowly” is a very good motto, especially for the art student who would make a success of his work.

The chief point to be understood in elementary drawing is this: that it is necessary to draw the object as we see it, rather than as we know it to be. For example, we all know that the steel rails of a railroad track as they go away from us are parallel; that they will be no nearer each other a mile away, if we walk along them that far, than they are at our feet here. If we make a drawing of them, then, on our paper exactly parallel, this will be drawing them as we know them to be. But this drawing will not look in the least as those rails do, as we stand and watch them going far off across the country. As they go away from us, the sides of the track appear to get nearer together as the track goes farther away; until, if we can see so far, we can almost believe they come to a point of meeting in the distance. Now if we draw them so, we shall draw them as we see them, rather than as we know them to be.

*I have updated Cast Drawing Using the Sight-Size Approach and the expanded edition is now available as an ebook. Click on The Sight-Size Cast to purchase a copy.
**We call this process, flicking. You can read more about it in the article, The Blink Comparator.