This article is part 2 of the series. I explained why you would want to begin with the darks when massing-in in the article, After Darkness, Light. 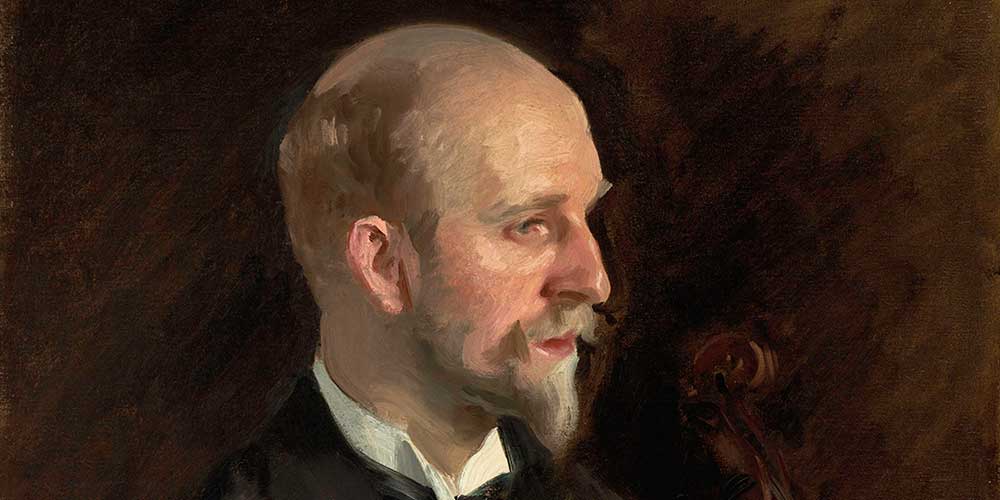 When the subject of representing values is discussed, someone will eventually respond with the following quote from John Singer Sargent in an effort to support a halftones first approach: “If you begin with the middle tone and work outward from it towards the darks and lights — so that you deal last with your darkest darks and highest lights — you avoid false accents.”2

Like all aphorisms, Sargent’s comment should be taken in context and never be considered the last word on the subject. Even he agreed. I think he would also agree with something Mr. Gammell once told a student: “It’s ok for Sargent to be Sargent, but it’s not ok for you to be Sargent.”

[Sargent insisted that] there were many roads to Rome, that beautiful painting would be the result of any method or no method. . .3

Nevertheless, let’s take a deeper look into his halftones-first suggestion.

What are Darks and Lights?

Before we go any further we need to set some parameters. Foremost among them are defining the extremes: darks and lights. I’ve previously written about the worlds of light and shadow, as well as the darkest darks and lightest lights so here I will merely summarize the relevant points.

Let’s begin with light. Light as seen on an object is actually the reflection of photons originating from an emitting source. The rays of photons from that source strike the object and then reflect off of it. If the reflecting rays reach your eye, you see light. How much light you see is dependent upon the angle of the rays. Of course the sun, which is the ultimate source of all natural light, is an emitter. The same holds true for the light from a lamp, a candle, etc.

Conversely, darks (shadows) are the absence of light. If you see different values in a shadowed area then one of two things is happening. Either some light is directly striking the surface in question, or some light is reflecting off of a nearby surface onto the surface in question and then back into your eye. The latter is called reflected light, even though all light seen on objects is reflected.

Halftones are sometimes called middle tones (or middle-tones). Regardless of the term, that we perceive them at all is due to the fact that they are in the world of light. In other words, some light is striking the surface on which we see the halftone. Were it not, that surface would be in shadow. As we go forward always remember that halftones are in the world of light.

Many artists attempt to perceive shadows and the ‘smash of light’ through the act of squinting. Doing so reduces your perception of accents, and allows you to better see a simplified version of the patterns of light and shade.

Sargent’s suggestion about beginning with the halftones came about because a student asked him how one can avoid false accents. So what does that mean?

Since it’s far from being a universally followed rule, from where did the halftones first idea come? 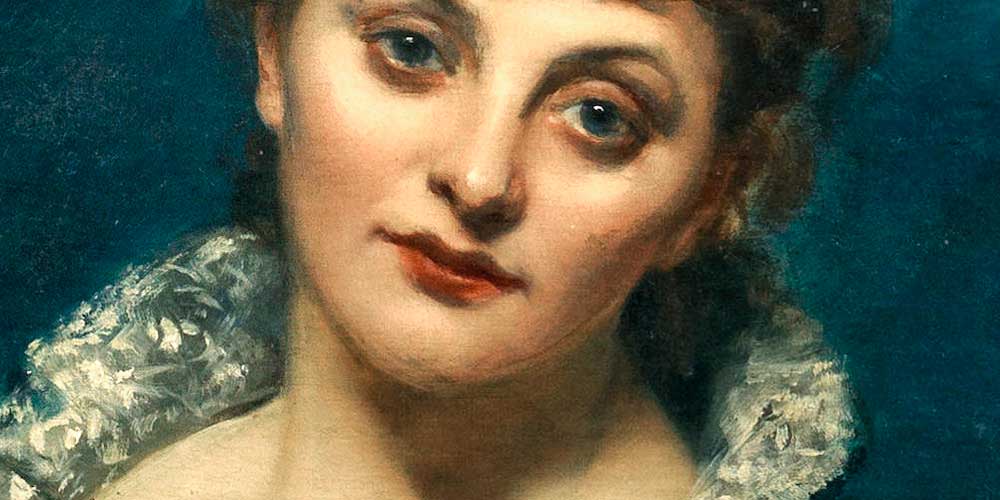 Carolus-Duran, Portrait of Mrs Harry Vane Milbank, detail (1877).
In this detail of Duran’s painting one can see that both the shadows and lights were added after the halftones.

Sargent’s main teacher was Carolus-Duran and it is through him that his love of halftones was kindled. Duran himself attributed his own obsession with them to Velazquez, an artist whose work he copied while in Madrid. He even believed that the secret to painting was in the halftones.4

Duran urged his students to make copies of the pictures of Velazquez in the Louvre,5 not laborious copies, but copies au premier coup.6

It’s a weird question I know, but is Duran’s Velazquez really Velazquez? Or, is his view of Velazquez’s work an amalgamation of different influences along with his own ideas on painting? I pose the question because neither Duran’s nor Sargent’s work looks much like Velazquez’s.7 They don’t have to, of course, but given the esteem with which they held Velazquez, he must have left a recognizable mark in their work. And despite my question, he did.

The key is in the last clause of Duran’s urging: “not laborious copies, but copies au premier coup.”

Velazquez did not work au premier coup. Rather, like most of his contemporaries, he worked in layers on a toned ground. You can see that for yourself in the racy detail of the unfinished painting above. The shadows are a thin stain, painted over what the British called a bone-colored ground. That ground, which is a warm grey, shows through in the center-left area.8

Oftentimes the ground is left to represent the halftones. When they are not merely the ground, they are slightly more opaque than the shadows. In those cases, they therefore had to have been painted after the shadows.

The lights are quite opaque and thickly painted. They were mainly painted last.

To summarize Velazquez’s method for painting flesh (as used from the late 1620s until the end of his life):

Duran’s au premier coup direction was clearly meant to teach the student to seek the look of Velazquez without arriving at it in the way Velazquez did.

Besides being enamored with Velazquez, both Duran and Sargent were quite taken with the Dutch painter Frans Hals. Hals was a contemporary of Velazquez, but he painted differently. A prime difference was Hals’ use of opaque shadows.

After the late 1620s, Velazquez rarely if ever did that. 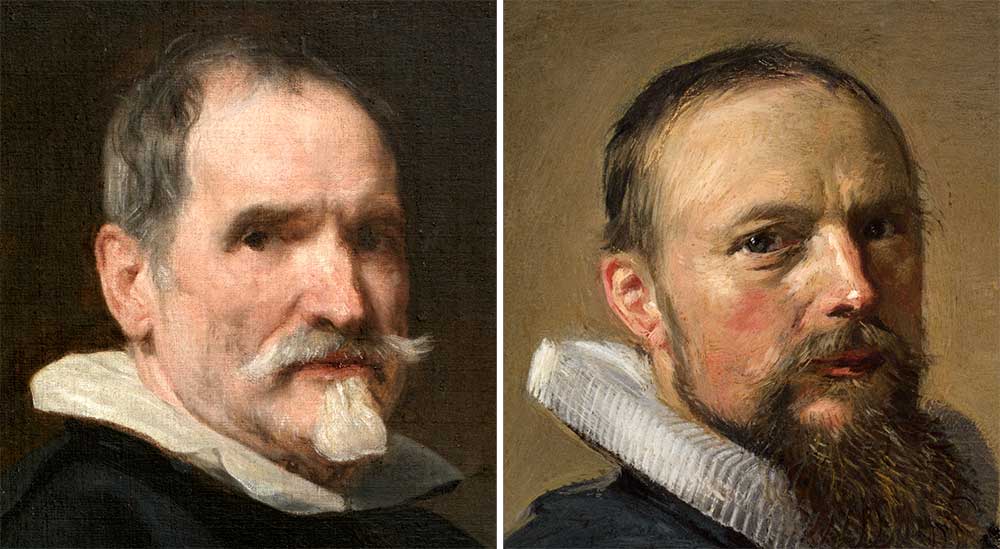 On the left, a detail from Velazquez’s, Juan Martínez Montañés. When seen in person, it’s obvious that he kept his shadows translucent.
On the right, a detail from Hals’ Portrait of Samuel Ampzing. Even in the photo on the screen, one can see that Hals painted opaquely throughout.

One result of painting ‘au premier coup’ is a lack of layers interacting with earlier layers. This fact alone all but requires opaque shadows. And that was not lost on Duran or Sargent.

In fact, Sargent told his students to copy Hals before attempting to copy Velazquez. “Begin with Franz Hals, after that go to Madrid and copy Velazquez, leave Velazquez till you have got all you can out of Franz Hals.”9

Another possibility for the origin of halftones-first is what occurs when using a toned paper for drawing. As seen in a recent show, Sargent was a prolific charcoal portraitist. His charcoals were often done on a light grey or cream-colored paper, with the lights at times being drawn in white chalk.

If you’re using charcoal (or black chalk) along with white chalk on a toned paper like Sargent, then you’re drawing aux deux crayons. Due to the paper’s value, you are also by definition beginning with the halftones. That is not to say that you cannot use the charcoal to add darker halftones and the chalk to add lighter halftones as well.

Regardless, the paper gives you the main halftone’s overall value. If that is not dark enough, you can mass-in a layer of charcoal for the halftones and then pick out the lights with an eraser. Sargent seems to have done this more often than not.

On the left, a detail of Frans Hals’ Gipsy Girl (1628). On the right, a detail from Carolus-Duran’s Portrait of Hector Hanoteau (1870).
In both cases you can see that the shadows (as well as the lights) are painted on top of the halftones.

Below is a detail of a painting on which Sargent had only fifty-five minutes to paint. Although he knew that he would only get one sitting, he had not prepared for that sitting to be slightly less than an hour! This is painting au premier coup in perfection! 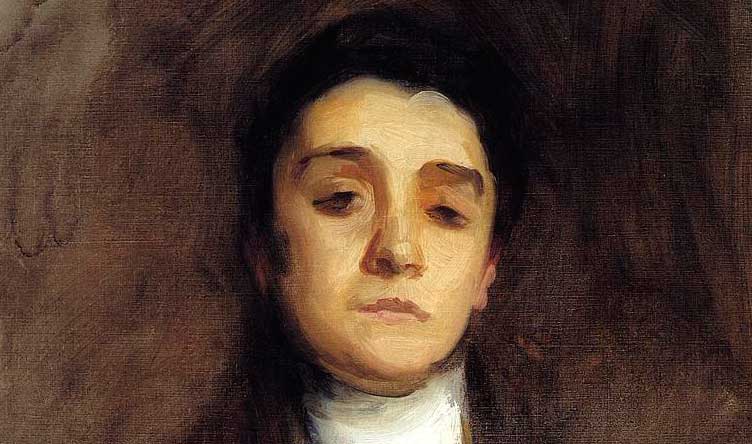 It’s fairly obvious that Sargent followed his own advice and began with the halftones. Both the darks and lights are clearly on top.

So What’s the Point?

Second, beginning with the halftones takes a highly developed eye. When one begins with the halftones, it’s fair to ask, which one(s)? If the area in question is not shadow, light, or highlight, then it is halftone (which again is in the world of light). And there are many, each of differing value.

Additionally, the difference between obvious halftone and light is often obscure. Go take a look at a fully leafed-out tree in full sunlight to see what I mean. Most cast arrangements are similarly contrasted (broad areas of deep shadow and a smash of light with few halftones). In situations like those, beginning with the halftones will result in few areas of value on your paper or canvas. That alone makes it hard to find a true hierarchy when beginning with the halftones.

And third, when beginning with the halftones a specific set of visual circumstances is helpful. Go back to the top of this article and look at Sargent’s painting of Charles Martin Loeffler again. Notice how the dark side of his face is not really shadow. It’s a dark halftone.

Whether you begin with the darks as I advise, or the halftones as does Sargent, remember one thing. To solve the problem of values you must determine the true hierarchy of them.

1 This completely bastardizes something Nietzsche once wrote: “All sciences are now under the obligation to prepare the ground for the future task of the philosopher, which is to solve the problem of value, to determine the true hierarchy of values.” (Friedrich Nietzsche, The Genealogy of Morals, 1887). Being no fan of Nietzsche, I’m ok with misquoting him.
2 Sargent’s comments were in response to a question about avoiding false accents. The full quote is: You must classify the tonal values. If you begin with the middle tone and work outward from it towards the darks and lights — so that you deal last with your darkest darks and highest lights — you avoid false accents. That’s what Carolus taught me. And Franz Hals. It’s hard to find anyone who knew more about oil painting than Franz Hals. That was his procedure. Of course, a sketch is different. You don’t mind false accents there. But once you have made false accents in something which you wish to carry far, in order to correct them you have to deal with both sides of them and that gets you into a lot of trouble. So that’s the best method for anything you wish to carry far in oil paint. From John Sargent, by Evan Charteris, 1927, page 29.
3 Ibid., page 183.
4 Op cit., page 28.
5 That’s a bit odd because the Louvre has only ever owned one Velazquez and the attribution has varied over time.
6 Op cit., page 28.
7 Note that most Velazquez acolytes (such as myself) focus primarily on the works from the last half of his career.
8 This painting, like all for which deductions are made regarding an artist’s process, must be seen in person. Absent an in-person view, photographs can only lead, they cannot confirm.
9 Op cit., page 51.