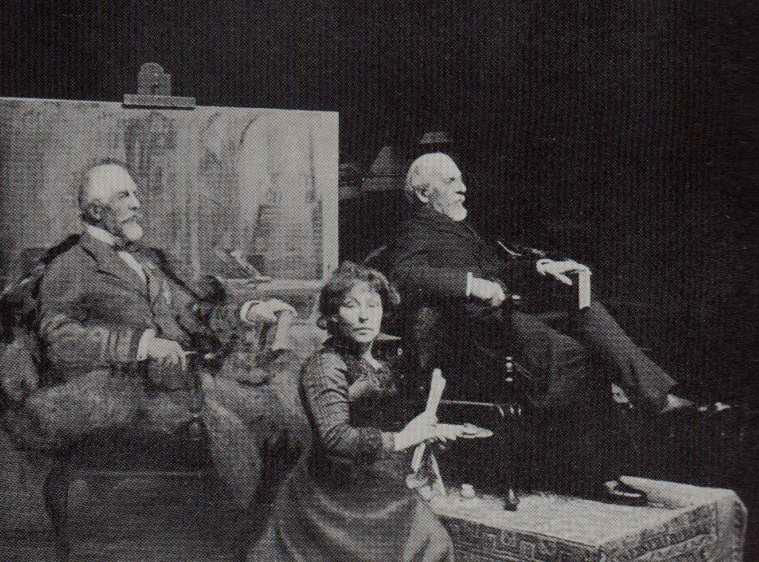 Henrietta Emma Ratcliffe Rae’s (1859-1928) interest in art began at an early age. After two years of drudgery at the Queen Square School, she began studying art in the Antique Galleries of the British Museum. She was only 15 at the time. Concurrent with her studies at the museum, and along with Solomon J. Solomon, she was accepted into Heatherley’s School of Art. Miss Rae was the first woman admitted to that institution. During her evening classes at Heatherley’s she met her future husband, another art student, named Ernest Normand. They married in 1884. 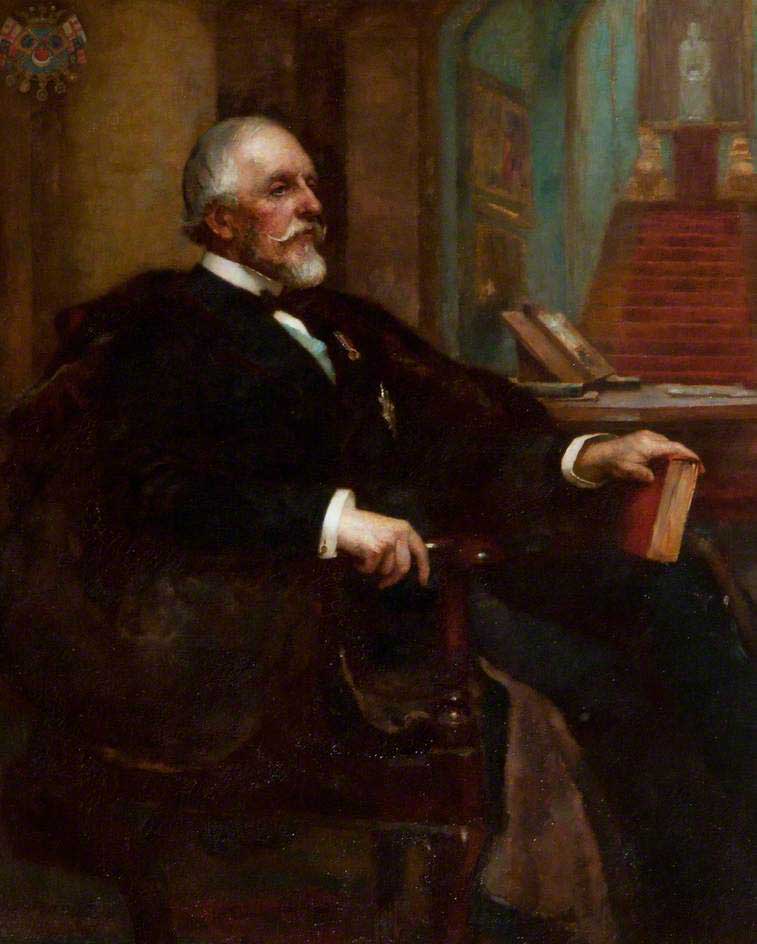 The finished painting (commissioned by the Ulster Yacht Club in 1901). 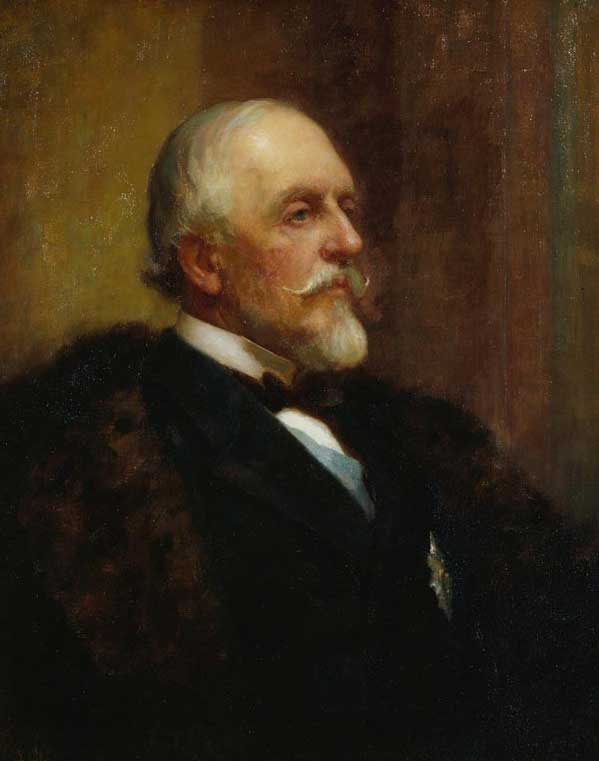 But Heatherley’s was not the end-goal. The Royal Academy School was.

Admittance to the Royal Academy was only given after providing an acceptable “drawing in chalk, about two feet high, of an undraped antique statue; or if of the ‘Theseus’ or of the ‘Ilyssus’ . . . accompanied by drawings of a head, hand, and foot.”

Even at that, this approval only led to a three month probationary period. To gain full rights as a student, she, like all other accepted applicants, spent the three months proving their abilities by creating “a finished drawing from an undraped antique statue, and outline drawings of the same figure anatomized, showing the bones and muscles with references to each particular anatomical point. If these drawings, with the first one submitted, were considered satisfactory by the Council, the probationer was duly admitted as a student for a period of seven years.”

Although it took Miss Rae six attempts, she did not let that damper her enthusiasm. Both Solomon and Normand made it as well.

One of the visiting RA teachers at the time was Sir Lawrence Alma-Tadema.
Miss Rae was impressed. On one of the occasions of that artist’s “visitorship” he posed the model in the attitude of one of the figures in his picture “Sappho,” and Miss Rae’s study attracted his attention. Taking her brush he commenced to work on her canvas, and after a short time it assumed the appearance of one of his original works. The pupil was delighted at the prospect afforded by such a possession, a delight that was cut short by the artist saying, “There, that’s what I wanted to show you,” and wiping out all his work.

For a time, Henrietta and Ernest lived in Holland Park (London), near other artists who were quite well known at the time. John Everett Millais and Lord Leighton, among others, were frequent guests at the Normand’s house.

Visitors were not always helpful to the young artist and Henrietta was pulled in different directions.
When Henrietta Rae was at work on her picture of “Ophelia,” in which the King and Queen were depicted as being seated on a settee while Ophelia was entering the hall, Val Prinsep used to drop in occasionally and bring fresh criticisms on her treatment of the picture. He would suggest her putting the head of the King differently nearly every day. Mrs. Normand being herself never quite satisfied with the effect kept altering the pose accordingly, feeling dreadfully worried and disheartened all the while.

At last one morning Sir Frederick Leighton came into the studio, and, after inspecting the very latest change of position, made an observation, stopping any further alterations which might have continued to take place. “Why do you keep altering the picture and following every fresh suggestion? The only place you haven’t had his head is on the floor. No, it won’t do! Pose it as you wish, and then keep it so.”1 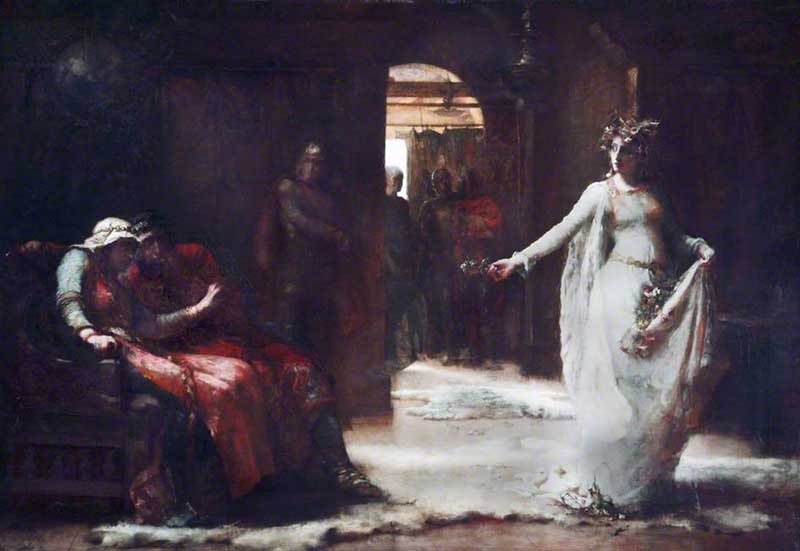 Ophelia, along with a painting by Ernest, Vashti Deposed were meant for the RA’s 1890 exhibition. Both paintings were poorly hung. Millais agreed and suggested that the paintings would look better in their present positions if they were tilted a little. The hanger, artist Edwin Long, was dismissive.

The event shook the Normands’ confidence so much that they decided to go to Paris to shore up their abilities. While there they attended the Académie Julian with Jules Joseph Lefebvre and Jean-Joseph Benjamin-Constant. 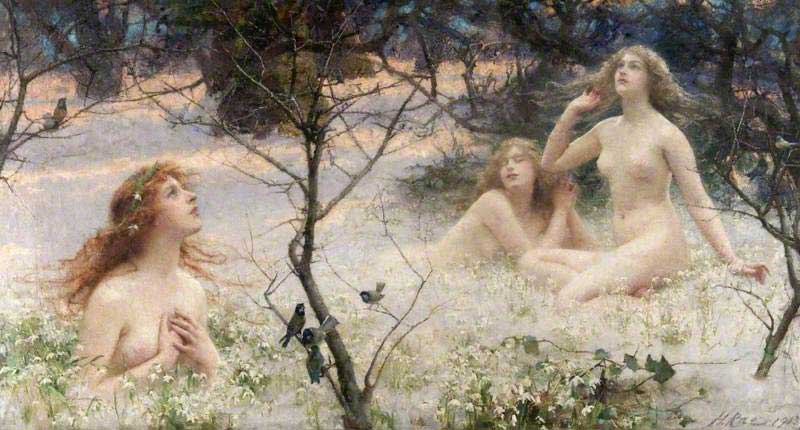 Rae’s life as an artist seems to have been filled with mixtures of success and disappointments. Henrietta Rae, who in private life is Mrs. Ernest Normand, exhibited her first picture at the Royal Academy in 1880, when she was twenty years of age. Her first popular success was that famous picture which is to be found in all quarters of the globe today, “Psyche at the Throne of Venus.” This picture was exhibited in 1895, after Mrs. Normand had been “painting hard,” to quote her own words, “for nearly twenty years.” Therefore, “out of my own experience,” she says, “I can say to any young artist who may be depressed through lack of immediate success – Don’t give up because you have failed to get that commendation for which you had hoped. Even when the cup of success was offered to me there was a big, bitter drop mingled with its sweetness, for one of the critics facetiously described my picture as a glorified Christmas card!”2 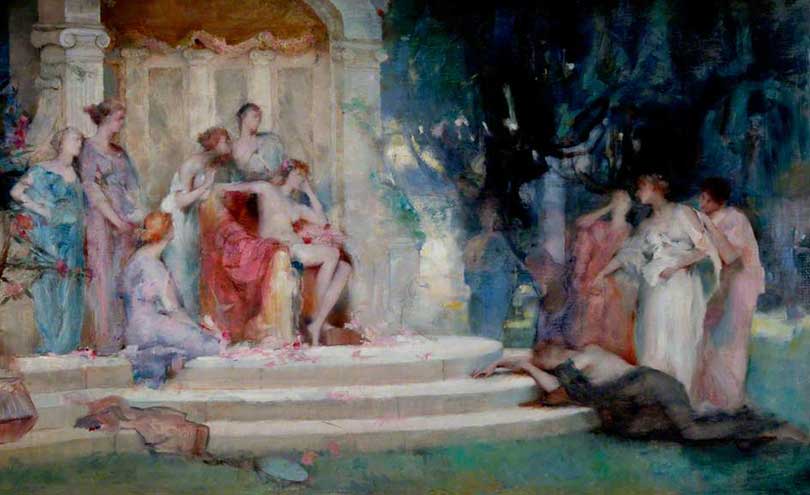 Henrietta Emma Ratcliffe Rae, Sketch for Psyche at the Throne of Venus.

There is much more to the story and in 1905 Henrietta Rae’s life became the subject of a book.
It is viewable online for free here.