How An impressionist Sees – Part 2

To best make sense of this article, if you have not done so already read through my article on The Other Impressionism first.
You are reading part 2 of this series. Part 1 is here, and part 3 is here. 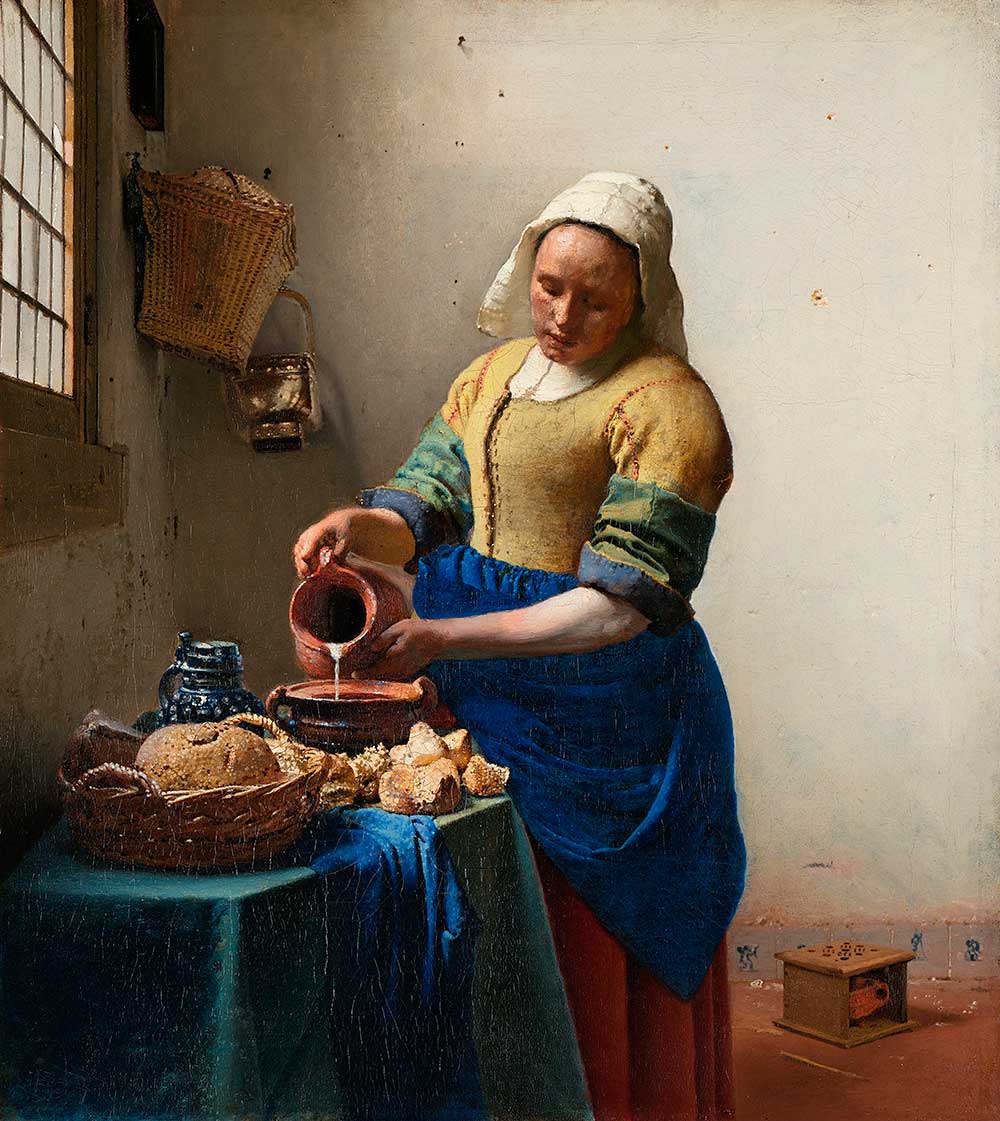 Vermeer, The Milkmaid, 16″ x 18″ (1660). Vermeer is considered by many to be an artist who pursued the visual impression.
That he consistently accomplished this kind of representation on such a small scale is part of the wonder that is Vermeer.

Mentioned before is that context is everything to an impressionist painter. In fact, examples are everywhere if you know how to perceive them. Our perception of how light or dark, how warm or cool, and how sharp or soft something appears is impossible to define without reference to what surrounds the target — its context. Of all the ways used to describe how an impressionist sees, contextual seeing is perhaps the most descriptive.

Seeing contextually is something that usually has to be learned, and then regularly practiced. Few students hit on the idea without being told about it. That said, impressionist seeing is not that difficult, it merely has to be intentional and consistent. The essential principles follow and in them you will notice that I am somewhat avoiding color. This is because color makes up only 1/5 of the painting pie. Despite the common connection between color and Impressionism, color for an impressionist is no more or less important than shape, value, edge, and the unity of effect.

In the example images for the article, the painting is positioned directly next to the cast (which is textbook Sight-Size) because this facilitates a quick and effortless comparison.* Since I am left-handed, the cast is to my right. The examples for focus points I present here originated in a thumbnail sketch Richard Lack did on the side of one of my cast drawings when I was his student.

Before we begin, it is important to understand how one goes about not seeing impressionistically. Gammell and many before him called this kind of seeing, piecemeal seeing. This is our default way of seeing when untrained. To be fair, there are also trained artists who prefer to see, draw, and paint in this way.

This artist might even look at the eye through an empty paper towel roll, or a little square cutout in some cardboard, in order to intentionally isolate it from the scene. All other aspects of the scene would be rendered in the same way. 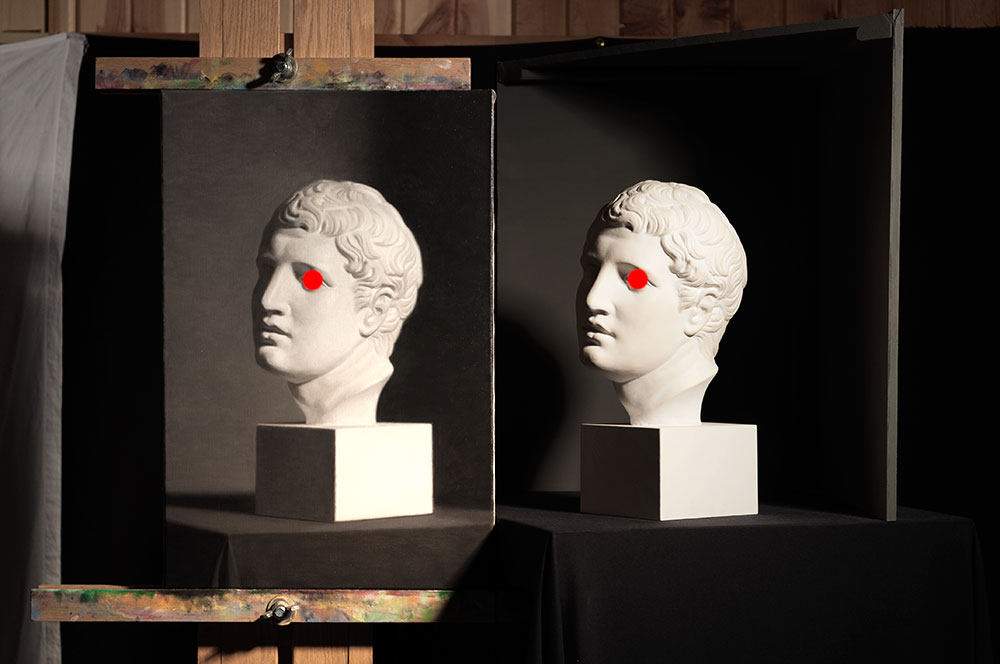 Piecemeal seeing, which is focusing directly on each part (and often only on that part) while you paint it.

Conversely, an artist who is interested in impressionistic seeing and wants to express that vision in the painting might view the scene in some or all of the following ways.

In-between
After the initial lay-in, he or she would begin to refine the painting while looking at each part just as a non-impressionist might (as was shown above), but he would also focus on an area in-between the painting and the scene in order to better judge how the parts related to the whole (as is shown below). 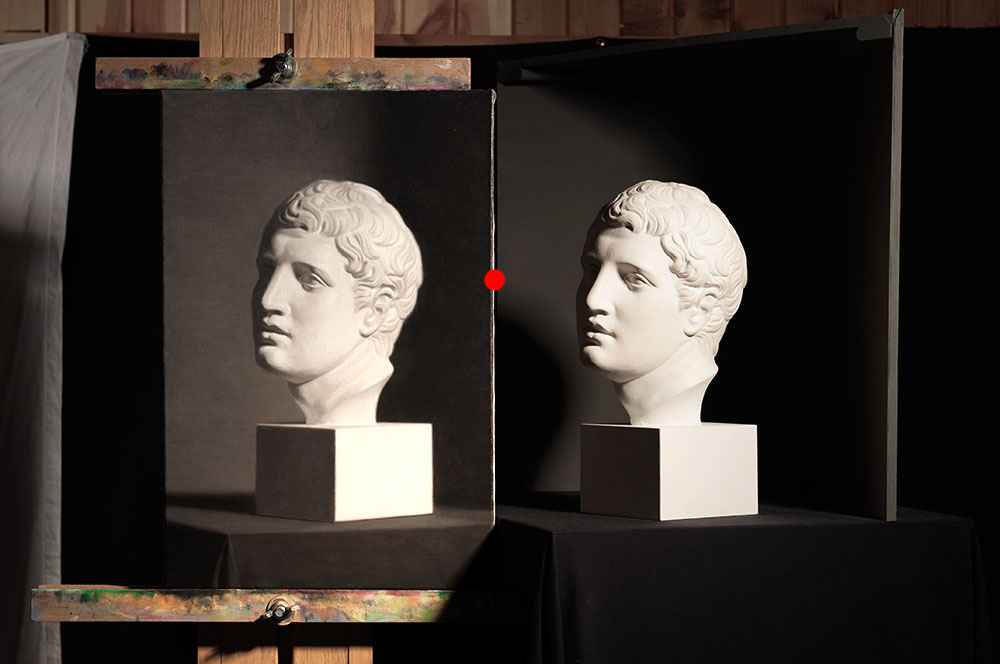 Focusing on an area in-between the painting and the cast.

Above Center
And/or, he might focus on an imaginary point, centered just above the setup. While viewing the setup in this way, he would try to peripherally see the eye in relation to the other things in the scene. As I note in my book, this skill seems to be acquired or at least enhanced over time. At first, seeing peripherally more than a few inches away from the focus point is all that the average person is capable of doing. With much practice the effective distance increases. 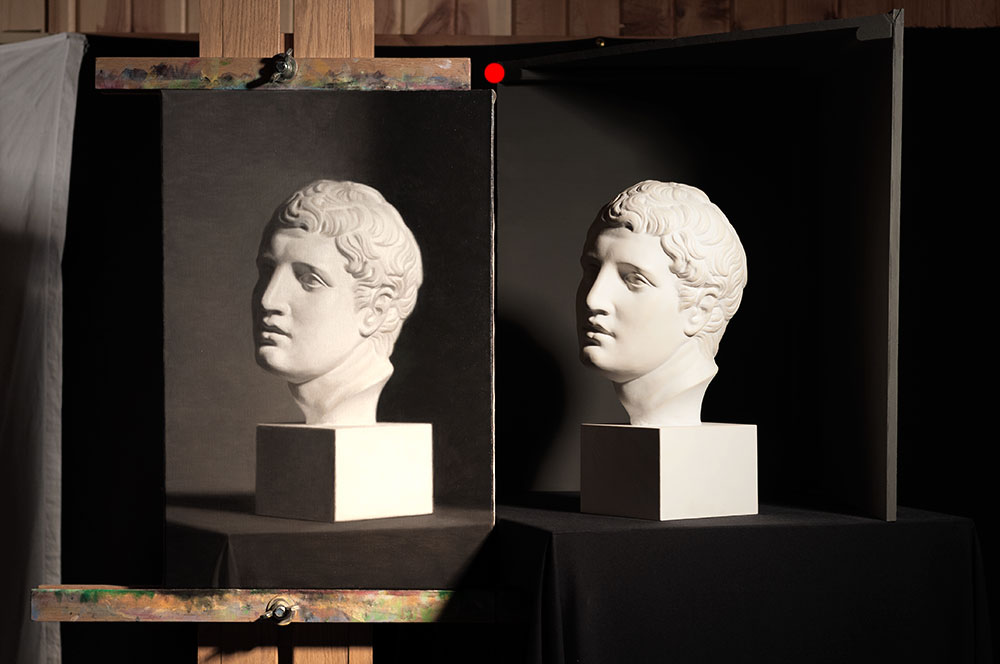 Focusing on an imaginary point, just above the center of the setup.

Above Each
And/or, he might alternate his focus between two imaginary points, one just above the painting, and another one just above the scene. He would then flick his eyes rapidly between those points while paying attention to what his peripheral vision showed him. 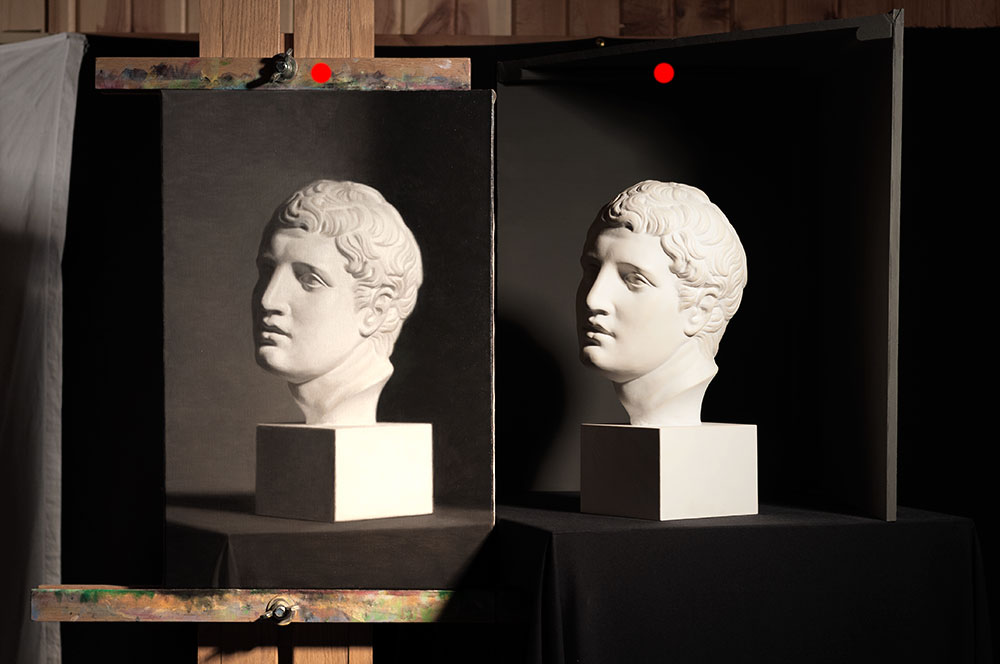 Focusing above both the painting and the cast.

Those focus points are used to give your eye a chance to see relatively, rather than seeing in isolation. That is critically important for an impressionist. Viewing the setup in these ways is as valid for shape as it is for value, edge, and color. It should also be noted as well that in a sense those are extreme examples. More common is to focus just to the side of the area being painted while peripherally seeing that area. That is what is shown below. 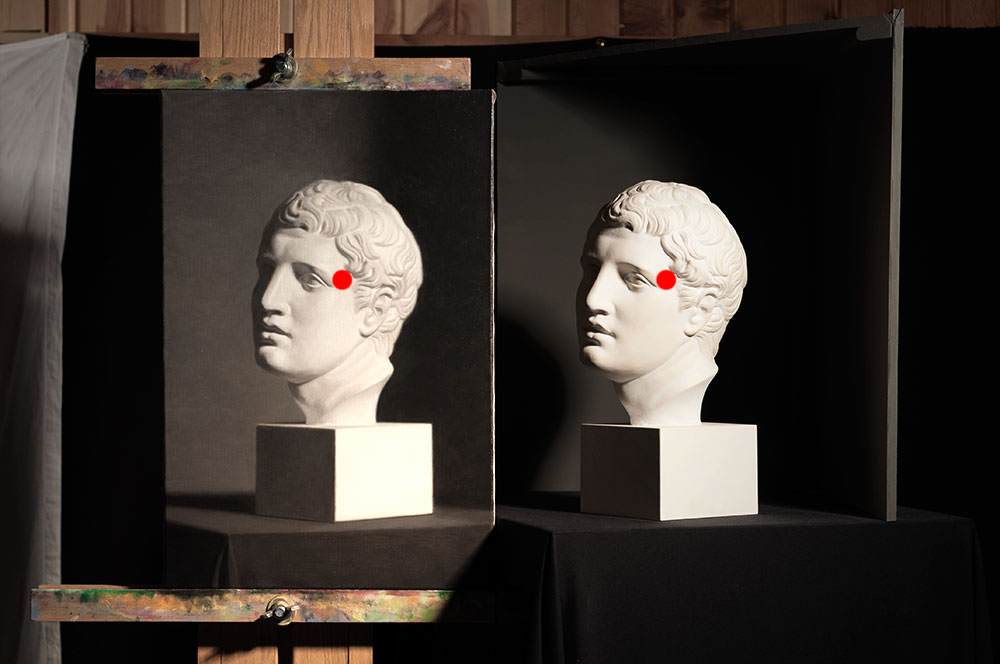 Focusing just to the side of the area of intention.

There are a multitude of questions which continually run through the mind of the artist who is looking at their scene in these ways.
Is it:

In all of those arenas a set of hierarchies are established and each is based upon observed extremes. The photo below shows something of what I mean, relative to sharp/soft. 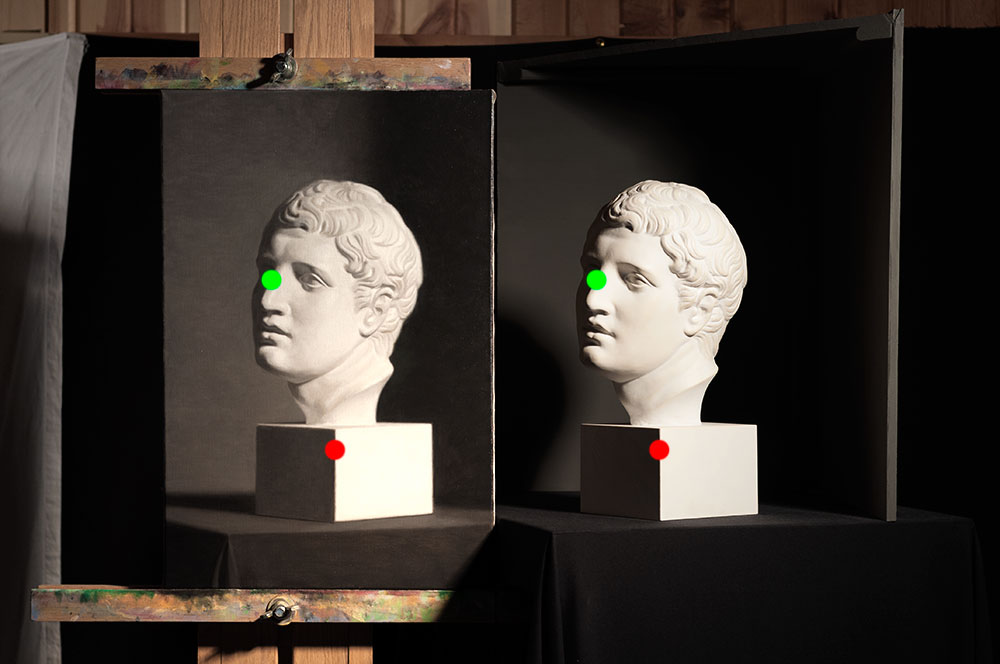 The sharpest observed edge is represented by the red dots.

Although it is not as clear in the photo as I would like, I observed that one of the sharpest edges on the actual cast was the front edge of the base (red dot). Therefore, I made an effort to paint all of the other sharp edges in the cast (the green dot is an example) relative to that sharpest edge, and then ultimately relative to each other. But for following that process the entire painting would have ended up looking like a set of cookie cutter shapes, with sharp edges all around.

The artist’s decision about where the viewer ought to look first, and so on, eventually becomes critically important. In the part 1 I mentioned composition as one of the reasons to see impressionistically. Part of the process is choosing a focus point and adjusting the comparatively observed values, edges, and colors to that point. You see, choosing the focus point that you want your viewer to have is partially in your control. Is that not one of the important reasons to paint, to show the viewer your vision?

It may seem that this kind of painting is wholly dependent upon direct observation. For the most part that is true and make no mistake, it is advertised no differently. But, that is not the whole truth. Many other things are going on inside the artist’s mind in addition to the pairs of questions I mentioned above. Exactly where to intentionally deviate from nature, or the stated way of observing, is a prime example. Often, an impressionist will remove the painting from the scene in order to discern what in it might be changed to enhance the effect she is after. In the case of the example painting, I over-modeled the hair a bit because in the actual scene the distance from my light source to the cast was close enough that it somewhat blew out the values of the hair. I chose to bring them back.

*No, it is not strictly necessary to set up in Sight-Size in order to see impressionistically, but it makes the job far easier.