How An impressionist Sees – Part 3

To best make sense of this article, if you have not done so already read through my article on The Other Impressionism first.
You are reading part 3 of this series. Part 1 is here, and part 2 is here. 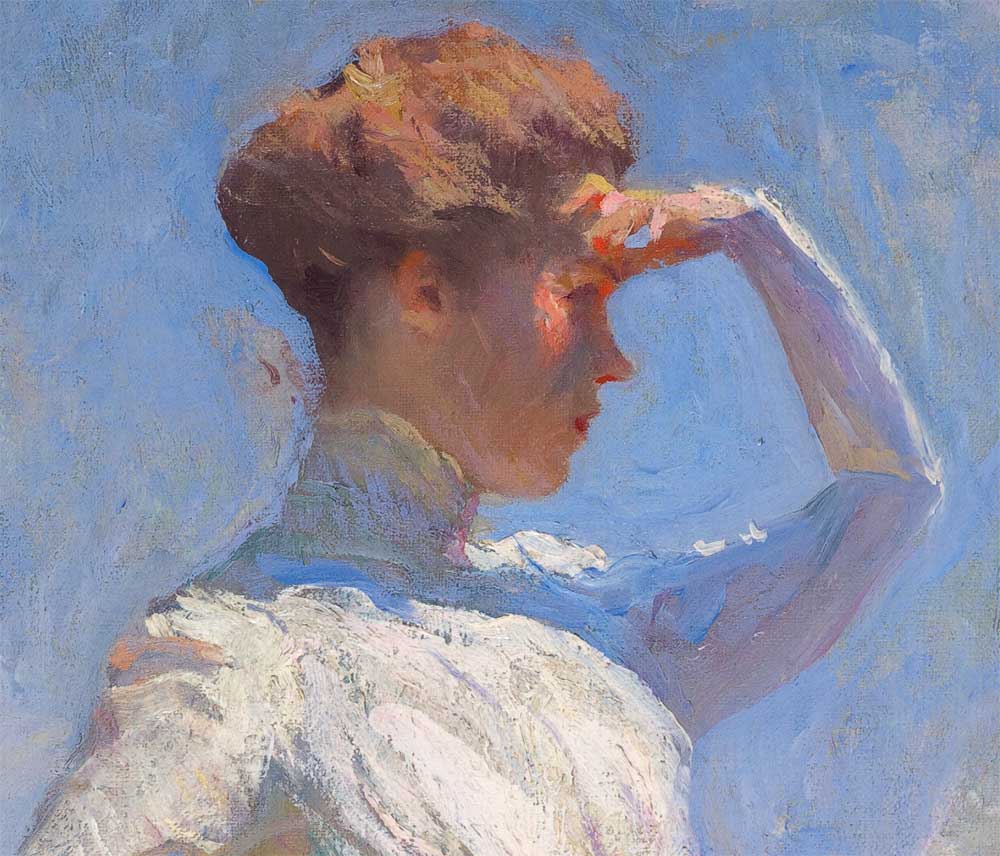 Frank Benson, Sunlight, detail (1909). Benson was one of the Ten American Painters, who are at times described as American Impressionists.

Before you read further (but after having read the previous articles, linked above), go to this site and do your best on the color test. It helps if you are viewing it on a quality monitor and in a darkened room. While there, you might as well read what the site’s page has to say as well.

Welcome back. How did you do?

More important for our purposes than your score is your awareness of the process that you followed when taking the test. Below is the last row of the test, prior to any adjustments. Take a moment and think about what went through your mind when you made your decisions about where to move the colors.

What thought was behind your first set of moves?

The colors are placed between two extremes, a bluish color on the left and a reddish on the right (conveniently, a relative cool and warm1). It is likely that your initial step was to choose one extreme and look through the rest of the colors to find the next color over from it. Discerning how correct you were with that choice became a lot easier after the move because you now had a better understanding of the range of shift. For your second move, you likely attempted the next color over from the first.

Now take a look at the nearly completed version below.

Even when you are this close to completion the process remains the same. Success depends upon correctly observing the relationships among the squares. You compare one to the next and perhaps even to a few others nearby.

An impressionist most often mixes his or her colors while comparing them to the others in the scene. They would rarely, if ever, attempt a mixture while looking at the target color in isolation.

Now, take a look at the optical illusion below. Try to discern which set of squares are the same color note (an impressionist defines colors as notes). 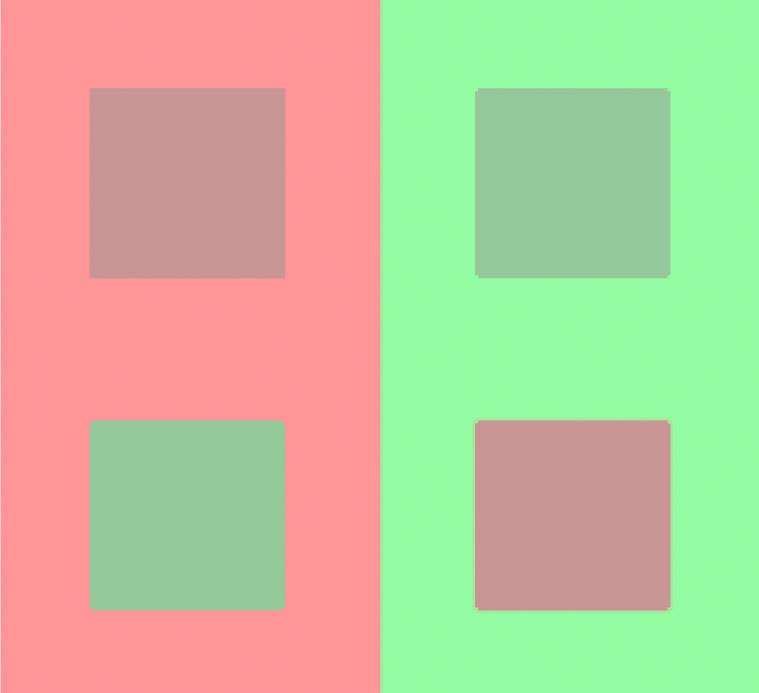 While doing the above demonstration you are still comparing, but that comparison is made more difficult due to context. The target squares are surrounded by a color that affects your vision so some of your ability to compare is compromised. Though an illusion, this kind of situation is present in the real world much of the time. Sometimes it’s color, as in the above image. At other times it’s value, as when you’re viewing a highly contrasted scene. Mostly, it’s actually both value and color at once.

The human eye’s ability to correctly perceive the color is affected by the surrounding colors, a phenomenon known as simultaneous contrast.

Conversely, if he painted the colors as seen in isolation, that would be pre-effect painting. It would then be up to the viewer’s eye to create the illusion.

So, how does one go about seeing a color contextually without looking directly at it? You either look away (as previously explained here), or you blur your focus.

I am sure we all know the caricature of the artist holding his thumb up while looking at a painting or a scene. There is sometimes truth in jest and that is the case here. 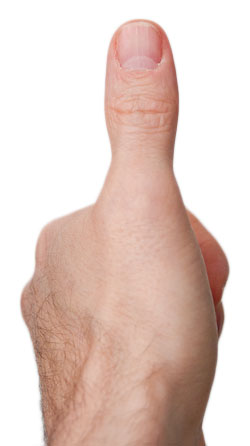 As I focused on in another article, in order to better see simplified values you must squint. But, to better see color relationships you must blur your eyes. Not everyone can easily do that, however, and that’s where your thumb or paint brush comes in handy. Holding up either, visually into the scene, gives you something on which to focus that is physically removed from and at the same time is visually within the scene. When focusing on your thumb, you can now more easily view the scene relatively because it is out of focus. You would then proceed to judge the color notes and their relationships based upon their appearance from a blurred or indirect focus.

No, you need not be in Sight-Size to accurately determine color note relationships. But it sure does help.

1The terms warm and cool used to be commonplace in the ateliers but now they are becoming less popular due to their vague meaning. I can understand that dislike, especially for those not trained in their use by someone who continually offered correction while using the terms. It is a developed thought and action process which takes time to become adept at doing. Is there a better way? For an impressionist I say not completely. Comparing shape, value, color, and edge through opposing contrasts is a major tenet of the approach. Splitting off the observation of value and color into something else leans heavily on isolation and that is thoroughly anti-impressionistic seeing.