Is Your Head Too Big, Or Is It Too Small?

Article by Darren Rousar. Most recently updated in April of 2020. 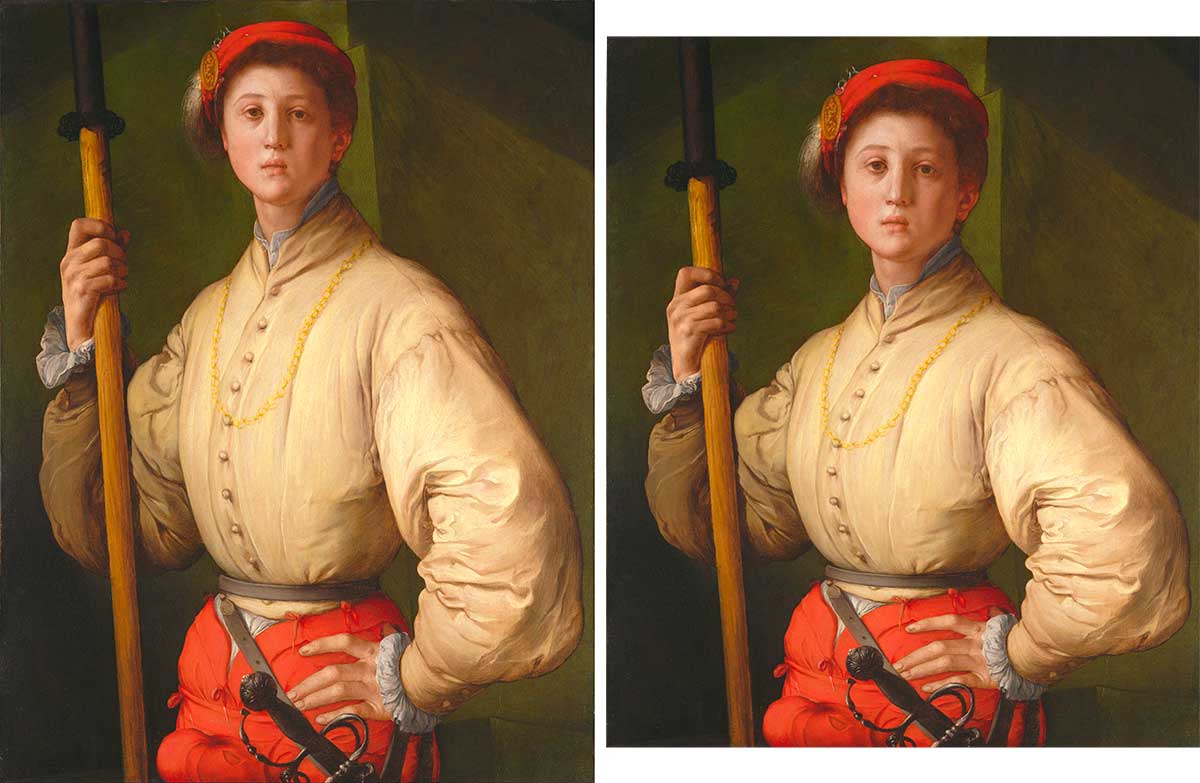 Pontormo, Portrait of a Halberdier (1529-1530). The image on the left is Pontormo’s original painting. The one on the right is my ‘correction’ of that image.*

Imagine yourself standing at attention and looking straight ahead. This is generally how you stand when you are in the viewing position of a Sight-Size setup. In that position, your eye’s line of sight can be thought of as a ray, shooting straight out from your eye. Of course, you see much more than that the minuscule point at the end of your line of sight. Encompassing all that you see is at times called the cone of vision.

Suppose that what you are looking at is a cast setup, in Sight-Size, with the drawing board directly to one side of the cast. Both the board and the cast’s support are vertical as well as being placed high enough so that they appear in the center of your cone of vision when you stare straight ahead.

Next, imagine that the back of your eye is a small, flat mirror.** Although I bristle at the thought of comparing your eye to a camera, that small imaginary mirror is not unlike the film or sensor in the back of a camera. So, switch the small mirror to a camera and take a picture. 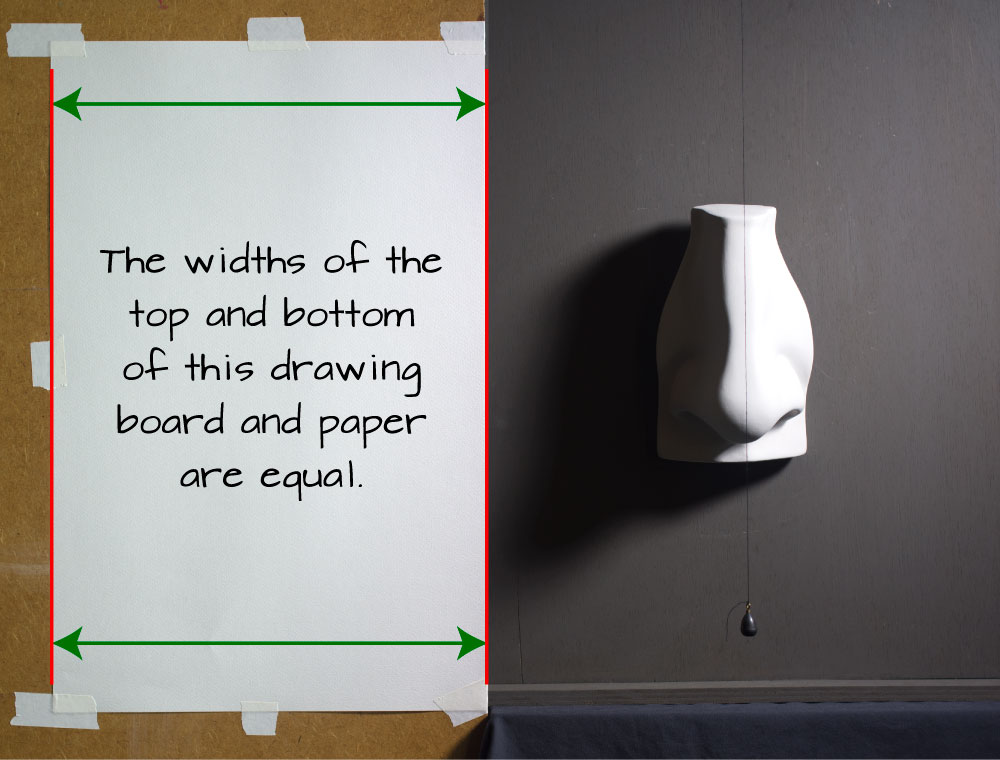 The resulting photograph would look something like this.
Since the board is parallel to the camera’s sensor, and to the back of your eye, the sides of the board are of equal width.

Now, suppose that instead of having your drawing board vertically oriented, you tilted the board forward (away from you) at the top. If you then took a photograph, what would it show? 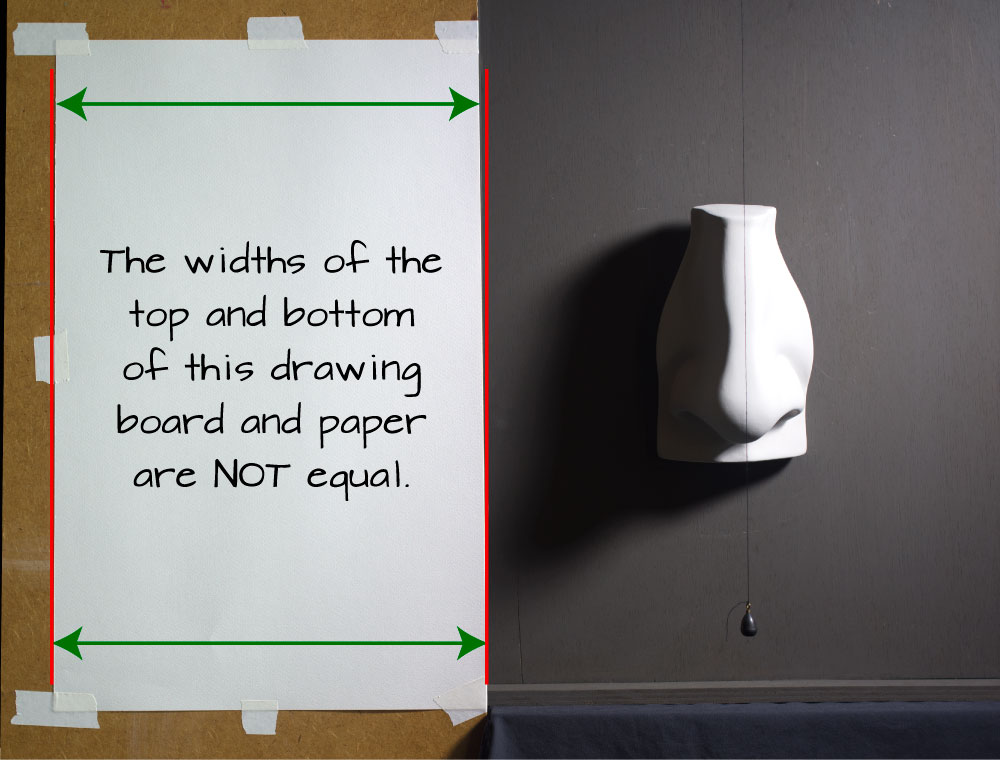 The resulting photograph would look like this.
Because the plane of the drawing board is titled away from you, it is not parallel to the camera’s sensor.

If you drew using that tilted setup, and did a good job, your drawing would match your source when viewed from that viewpoint and in that orientation. However, when you framed the drawing and hung it on the wall, the top parts of the drawing would be larger than the source was. In fact, from the bottom to the top there would be a slight progressive increase in size because the picture plane was titled forward when you did the drawing.

What if you were drawing a figure, in Sight-Size, but under life-size? In this case, your easel would be closer to you than is your source. In that arrangement, if you tilted your drawing board forward and did your drawing, the result would be a head that is progressively smaller than the rest of your drawing. This is opposite of our previous result.

The following diagrams are from late nineteenth and early twentieth-century drawing manuals. They explain why you want to keep your drawing board perpendicular to your line of sight. 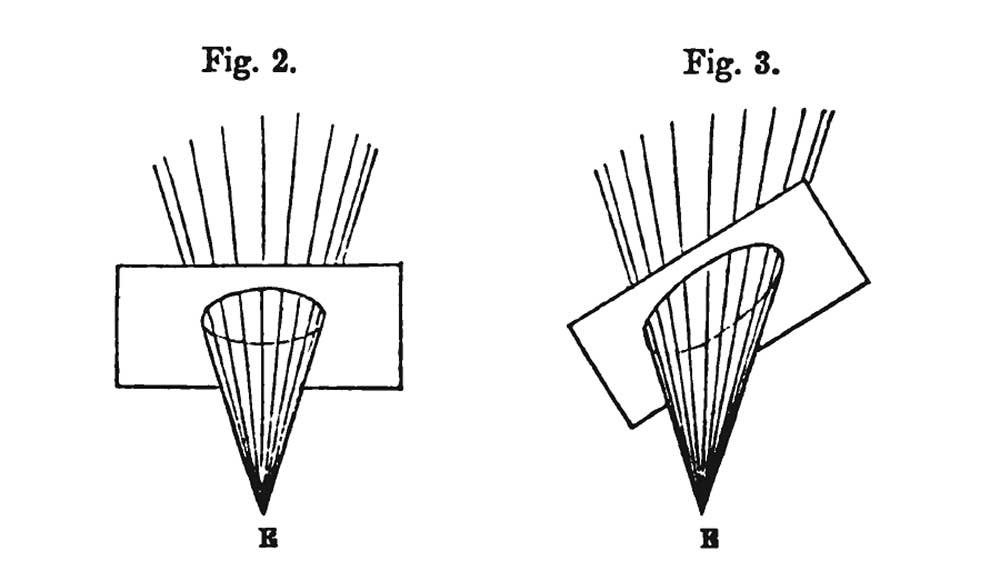 Is it ever OK to draw with your drawing board at a tilt? Yes, under certain circumstances.

The first case is when your subject is placed close to you and you are looking down at it. This is the situation for some setups, especially those Sight-Size Minis where you are drawing something on a counter or tabletop. Since you are looking down at the scene, you need to tilt your board forward so as to keep it perpendicular to your line of sight.

Another reason may be when you are not Sight-Sizing.

I say may because not having your picture plane perpendicular to your line of sight will always produce a distorted drawing. If, for example, you are seated at a drawing horse and your board is propped up in front of you, to look at your drawing you must tilt your head down. If the angle of the board does not match the angle of your head, the result will be a distorted drawing.

With this principle in mind, I fear that some of the students’ drawings in the photograph below may have issues. Although this picture is over one hundred years old, class setups like this are still commonplace in many art schools. One odd aspect of this kind of setup is that you’ll never see someone propping their drawing board up at a lateral angle to their line of sight. For some reason, vertical tilts are ok but lateral tilts are not? Unfortunately, both will result in shape errors. 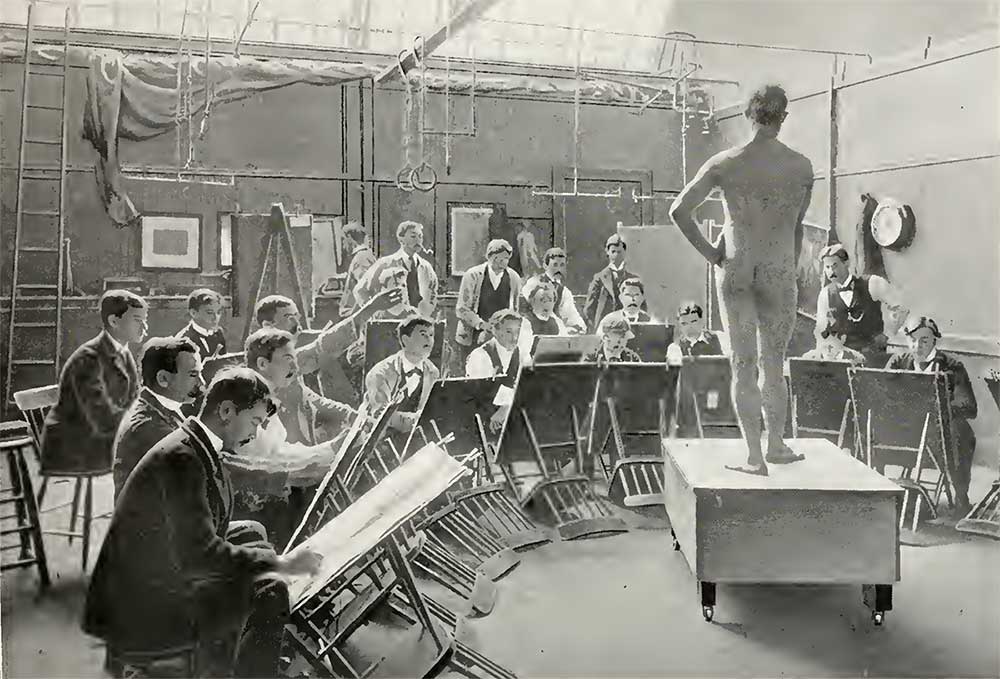 Below is a photograph of students working from a live model at the Art Students’ League. This time they have their canvases vertically aligned. 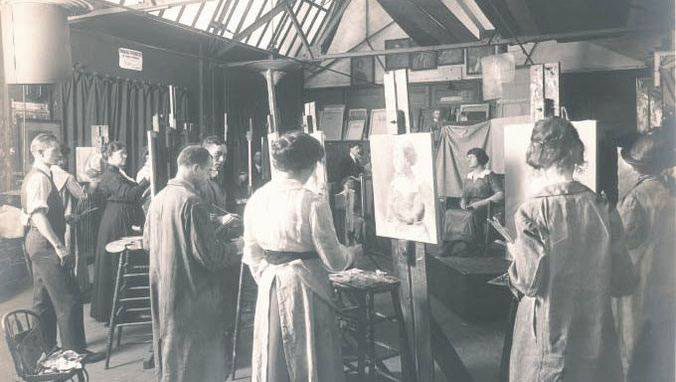 Vertical canvases at the ASL.

The final reason for not having your canvas vertically oriented is when you are intentionally attempting anamorphic perspective.

Anamorphic Perspective is actually what I have been describing above (small or large heads). Although not exactly on topic, artists have used versions of this at various times in history, often to create an illusion of a vaulted ceiling on a flat one.

More closely related is Hans Holbein’s famous painting, The Ambassadors. When you view the painting in the normal way, the bottom part of the image contains a distorted human skull. But, if you were to walk close to the painting and to the right, which requires looking down at an extreme angle, you would see a normal looking skull in an undistorted way. I’ve made a short video of this, below.

What’s the bottom line? If you intend to create a visually accurate drawing or painting, make sure that your drawing or painting surface is always perpendicular to your line of sight. If you do not, you will end up with a large or small head.

*Apologies to Sig. Pontormo. His distortions were intentional and unlikely related to the tilt of his easel. Rather, he was an Italian Mannerist painter whose paintings are often elongated. It is said that he idolized Michelangelo’s work and that Mannerist elongations stem from that influence.

**In fact, the back of your eye is actually slightly concave, which is one of many aspects that make your eye dissimilar from a camera. Nonetheless, that does not take away from the concept.