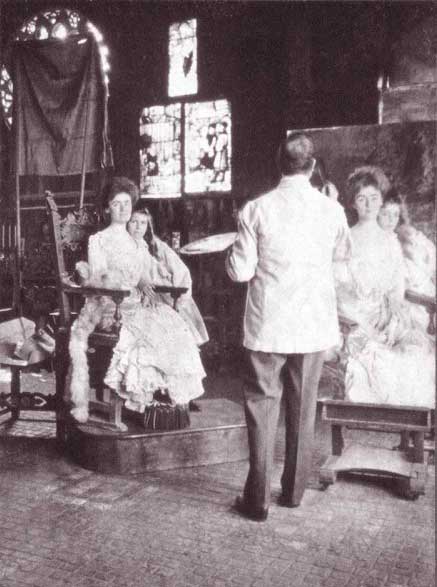 In 1903 Frederick Fiske Warren commissioned Sargent to paint a group portrait of his wife and daughter. The sittings took place in a room of Isabella Stewart Gardner’s Fenway Court. Midway through the painting a photographer was brought in to document the process. Notice the placement of the canvas, the models and Sargent himself.

Sargent, when he painted the size of life, placed his canvas on a level with the model, walked back until canvas and sitter were equal before his eye, and was thus able to estimate the construction and values of his representation. 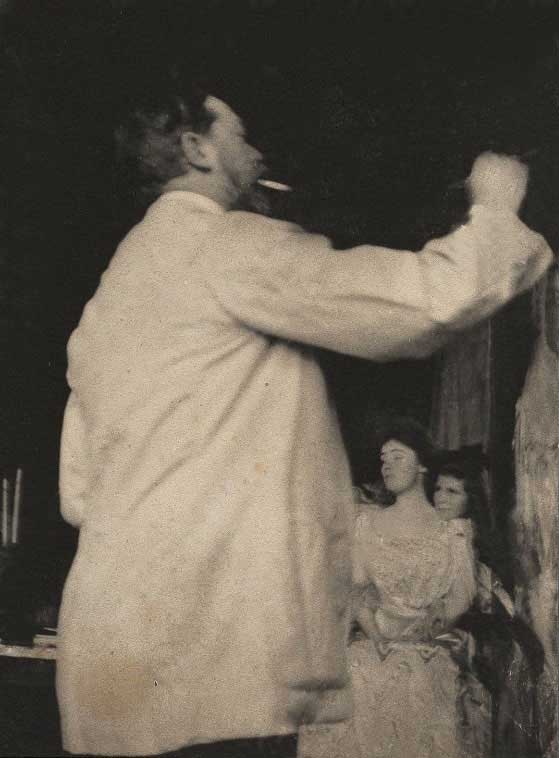 Another view of Sargent painting Mrs. Fiske Warren and her Daughter.

Sir William Rothenstein, a one-time student of Sargent’s, wrote of Sargent’s methods. He also laments his own practice of standing next to his canvas while looking at his subject aways off:
“I had acquired the habit of a technique of standing near to my canvas, some way from the model. If one paints sight-size there is method in this practice too; but often my figure was larger than sight-size, and I struggled in consequence with difficulties which, had I followed Sargent’s example, I must have avoided. . . the placing of the canvas near to, or at a given distance from, the subject, so that the sitter and image can be compared together, is an essential factor of representative painting.”
-William Rothenstein, Men and Memories, Coward McCann, 1931, page 193.

The method Rothenstein talks about is painting the subject one-to-one. In Sight-Size, when the canvas is nearer the artist than the model, the resulting image is smaller than life. When the canvas is farther away from the artist than the model, the image ends up larger. Both arrangements are Sight-Size as long as the artist can view the model and painting together, in his or her vision, 1:1. A true 1:1, not only visual but also in a measured sense, is achieved when the canvas and model are directly next to each other and the artist stands back to view both. This arrangement, as Rothenstein comments on near the top of this post, is classic Sight-Size and how most ateliers teach it. 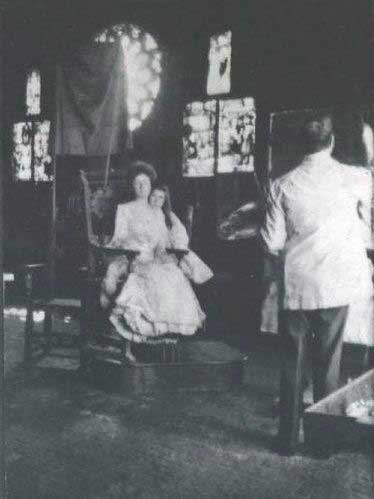 Yet another view of Sargent painting Mrs. Fiske Warren and her Daughter.

For the photo above, the photographer was standing a bit closer to Sargent’s viewing position than he was in the previous photographs. Still, I wish he’d moved his camera forward a few feet, to the other side of the open drawer, and higher. 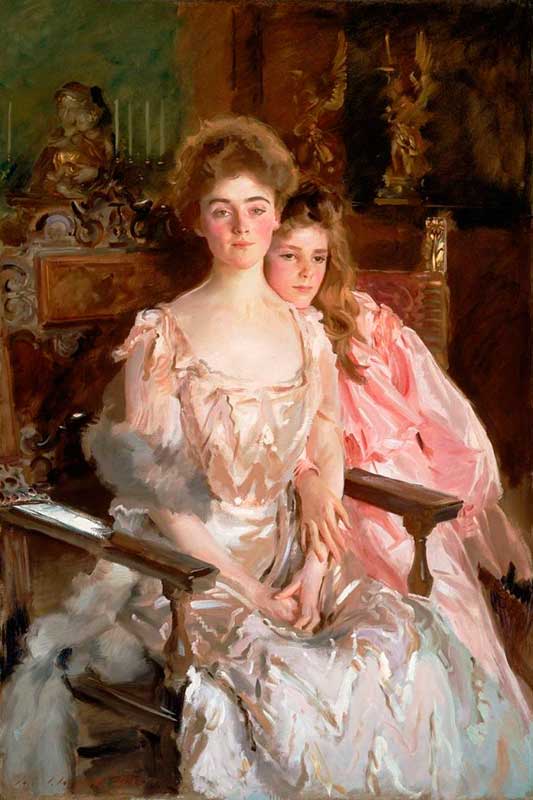 Evan Charteris, an early biographer of Sargent’s, fixates on Sargent’s use of Sight-Size:
“In painting a picture [Carolus-Duran, Sargent’s main teacher] would retreat a few steps from the canvas and then once more advance with his brush balanced in his hand as though it were a rapier and he were engaged in a bout with a fencing master – these gestures were often accompanied by appeals to the shade of Velasquez. Those who watched Sargent painting in his studio were reminded of his habit of stepping backwards after almost every stroke of the brush on the canvas, and the tracks of his paces so worn on the carpet that it suggested a sheep-run through the heather. He, too, when in difficulties, had a sort of battle cry of “Demons, demons,” with which he would dash at his canvas.”
-Evan Charteris, John Sargent, Charles Scribner,and Sons, 1927, p. 28.

Of course, even those who use Comparative Measurement stand back for a distant view now and then. But that’s not what is going on here.

For one thing he put his easel directly next to the sitter so that when he walked back from it he saw the canvas and the original in the same light, at the same distance, at the same angle of vision.

In other words, Sargent arranged his subject and artwork in such a way that when he took the proper vantage point he could see them one-to-one. That’s Sight-Size. 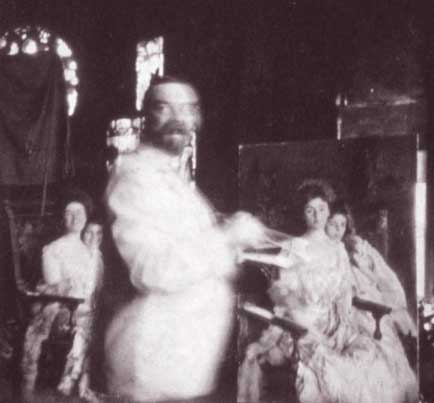 Apparently, Sargent could not stand still.

There’s more about Sargent painting from life in the article, Mr. Sargent and the Flower Children.