Article by Darren Rousar. Most recently updated in July of 2022. 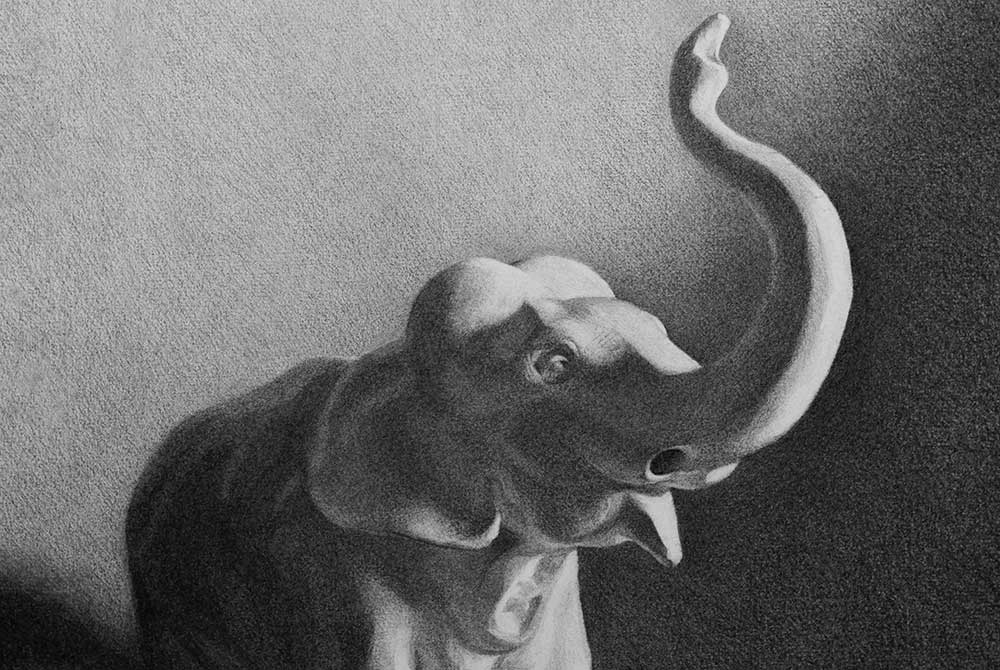 Finishing one area at a time is death to relational seeing. It interferes with your ability to compare relationships, whether that’s between shapes, values, color, or edges. Better is to keep everything moving along at the same pace. That not only eliminates the risks of piecemeal seeing, it also helps to assure an accurate representation. But how do you keep everything moving when nobody can effectively do more than one thing at a time?

In any drawing or painting the prime aspect which is used to represent likeness is shape. If the shapes are wrong, adding value is a waste of time. You’ll need to re-render all over again if, and when, you finally hone-in on the proper shapes.

In other words, first get the big shapes of the arabesque and bedbug line correct, then and only then mass-in the main values. 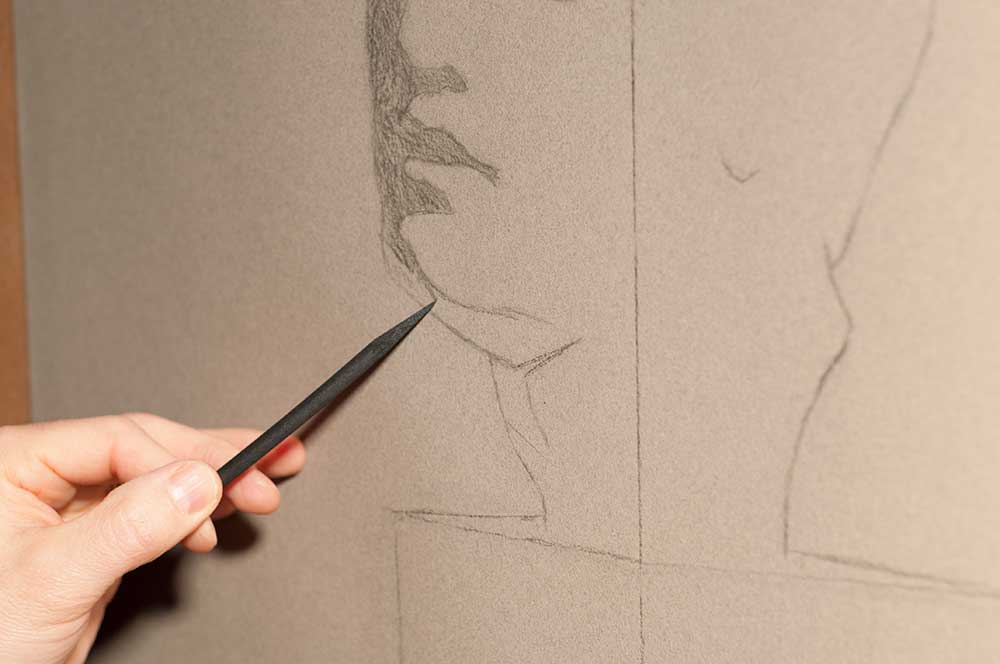 Some might ask, “But what if I do better by only roughly sketching in the shapes first and then adding values? Those values seem to help me see the shapes more accurately, which I then correct.” There is a kernel of truth to this question, but let’s hold off on that for the moment.

You can see an example of this approach in the cast drawing below. Bear in mind that the drawing was simply a start and was never taken past the point shown. However, many do go to finish with a start like that.

If the drawing was meant to be taken to finish, problems are on the horizon. And many of those problems are a result of the process. 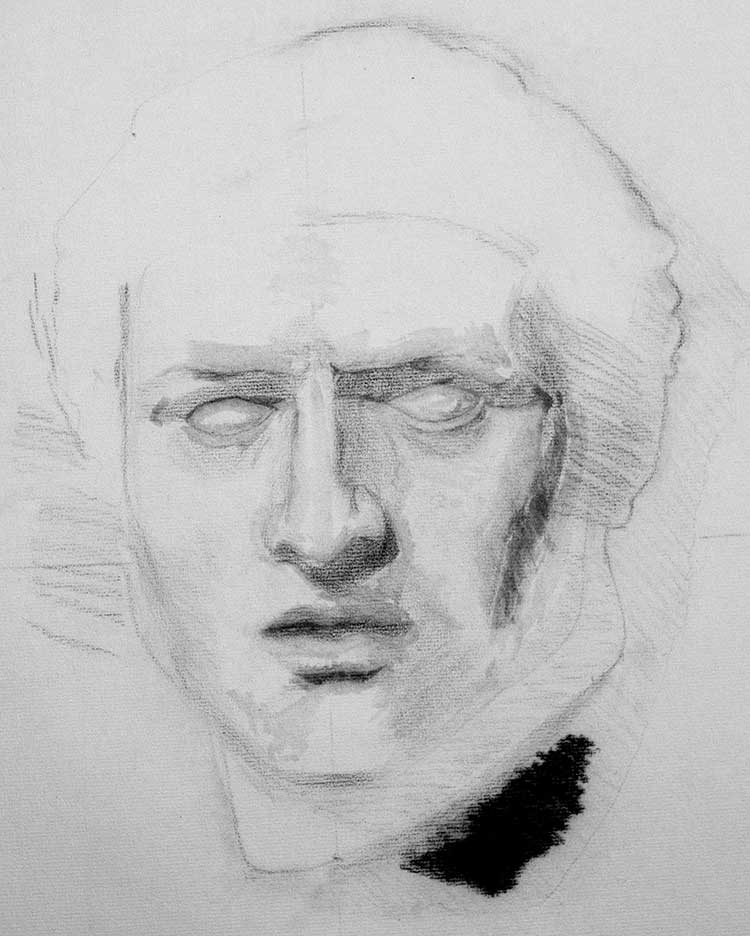 Among the many is that dark cast shadow beneath the neck. What happens if it is found to be in the wrong place? Will the charcoal erase well enough so as to not mar the paper? You can see that type of problem on the cheek near nostril on the left, where I was unable to completely erase an incorrect shape. 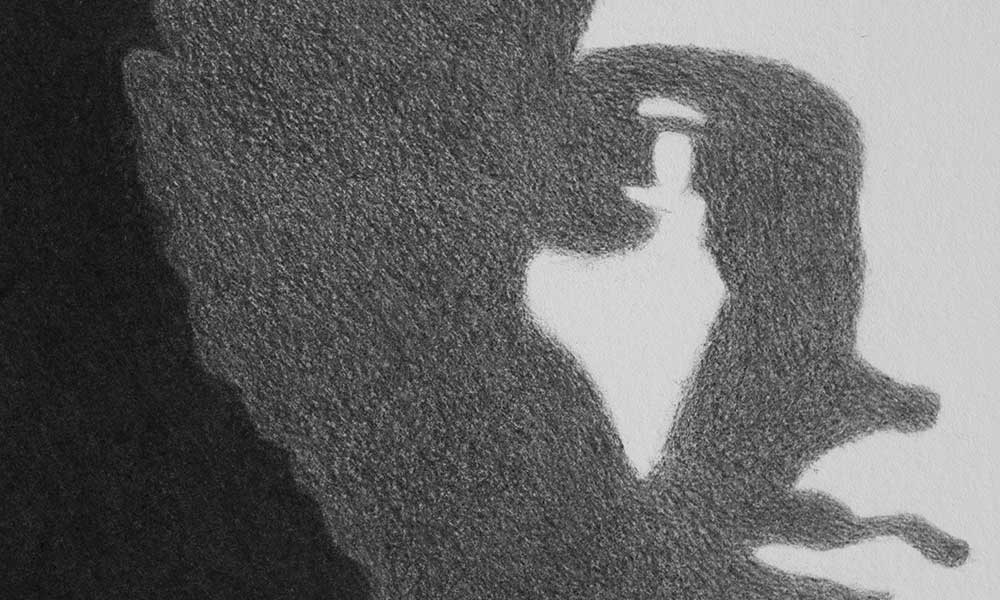 For learning purposes we segregate the different aspects of sight into individual components. In reality, your eye does not see in that way. Rather, it sees holistically.

As such, accurately seeing shape partially depends upon the values of those shapes, and vis-versa. That’s the kernel of truth I mentioned before.

Solving that seeming contradiction is done through gentleness. 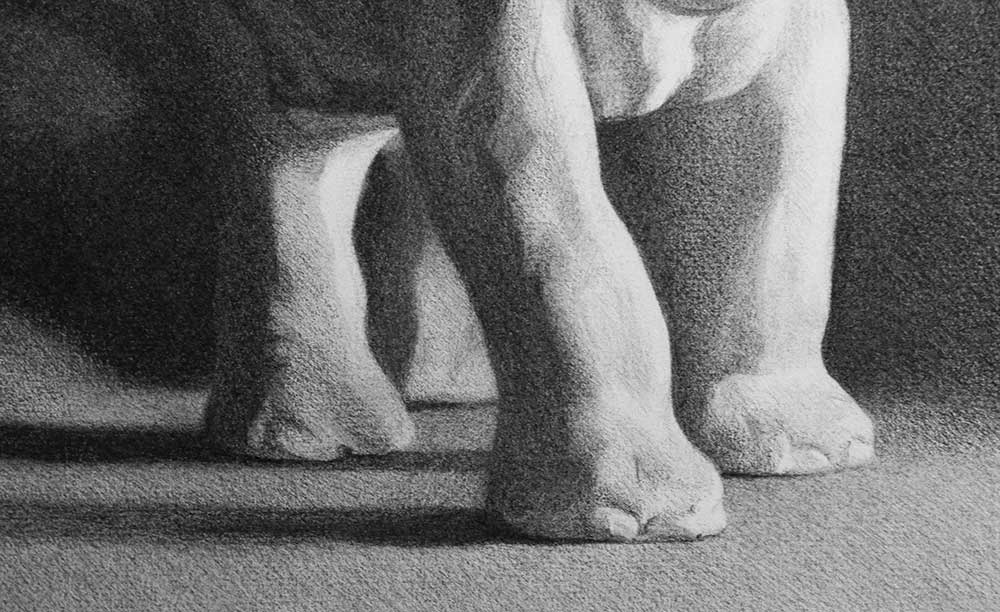 Everyone knows that remaining stationary for extended periods is harmful to your body. But most students do not know that fixating on one area of their drawing is harmful to their perception. The longer you look at and draw one area, two things begin to happen.

First, confirmation bias makes you believe that what you’ve drawn is correct. That’s why you’re better able to see errors in your drawing after a weekend away from it. Keeping everything moving helps mitigate that issue because you’re not limiting your focus.

Second, though you’ll likely be unaware of it, you’ll experience a slight burn-in effect. Stare at a bright light for a few seconds and you’ll see what I mean. No, the effect is not so dramatic minus the bright light. Nevertheless it does occur and it’s something like tunnel vision. When it happens it affects your ability to correctly perceive other areas of the scene.

Although it might seem to take longer to make a good drawing or painting if you don’t finish one thing at a time, ignore the fear. Keep everything moving at the same pace and the results will be better than you expect.

Approach each session as if at any moment you might drop dead at the easel. What would you like the viewer to see on it?