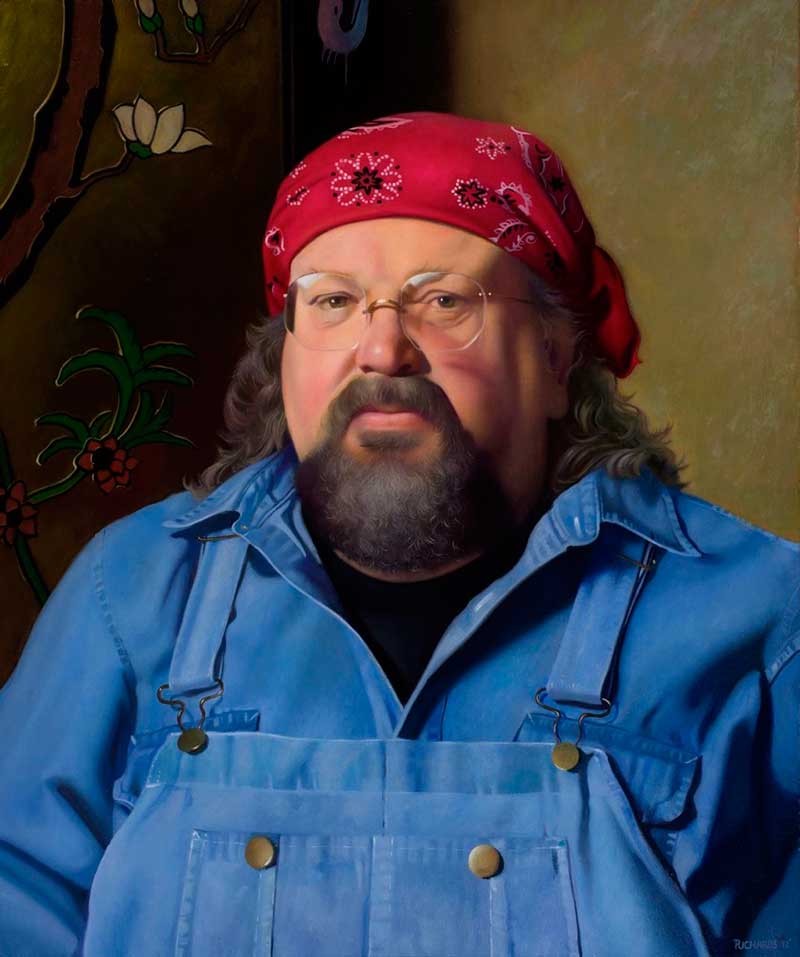 Artist, author and teacher, Kirk Richards and I first met, online in 2008, and in person during the memorial for Richard F. Lack in 2009. Since then he has often been a source of information and encouragement. Awhile back he was kind enough to answer some questions for sightsize.com.

What drew you to Richard Lack?
In 1974 or thereabouts I was attending West Texas State University, (now West Texas A&M University) pursuing a Bachelor of Fine Arts degree. A student brought to class a copy of the 1971 issue of American Artist magazine which featured an in-depth article on Richard Lack and his atelier.* The student allowed me to keep the magazine which I read and re-read. I was intrigued by the article because this was exactly the sort of training I desired. I wanted to learn to paint, as I put it then, like Rembrandt, but there were no classes in which the skills of the old masters were analyzed, much less taught. I put the article in the back of my mind because I assumed I would never be able to get into a program like that. In late 1975, after completing my BFA and within 6 credit hours of completing my MA (which I finished in 1977), I found myself desperate because I was nearing the end of my formal education and still had no understanding of the painter’s craft. I found the designation “Master of Arts” to be ironic because I would hold that title but not have mastery at all. I didn’t want to slide back in to the university as a teacher fulfilling the adage of “the blind leading the blind” but I had no direction, nor seemingly, any options. On a lark, I retrieved the magazine and decided to call Richard Lack in Minneapolis. He was gracious and encouraging to me and suggested I submit a slide portfolio to him. Six weeks later, I was living in Minneapolis and studying with Lack at Atelier Lack. This was the turning point in my career and professional life and I gladly attribute any artistic success I have to my foundational studies with Richard Lack. 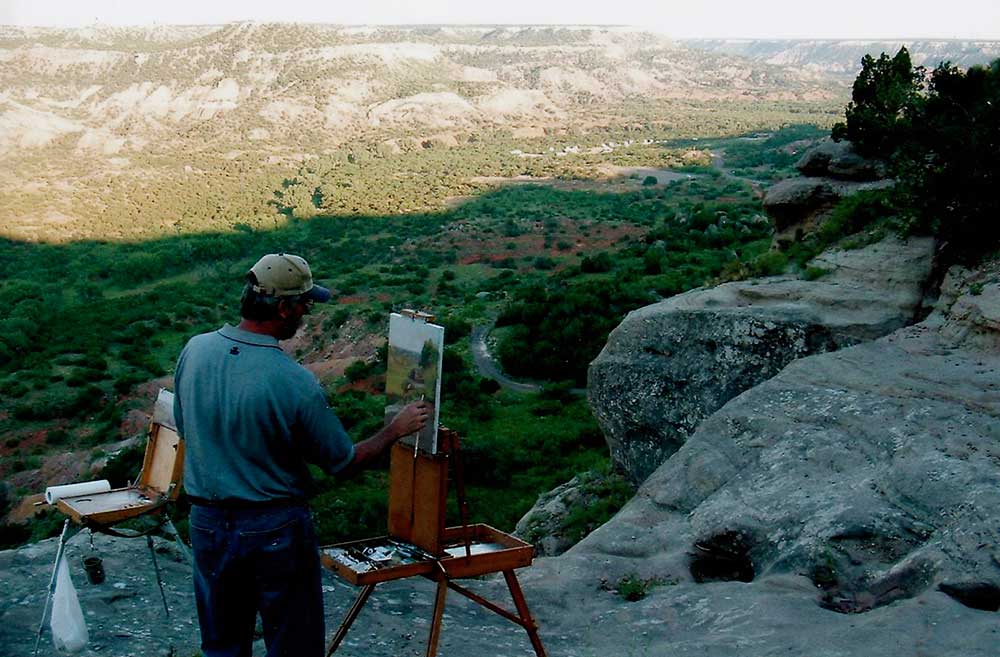 Kirk Richards painting on location in Palo Duro Canyon, in 2010. 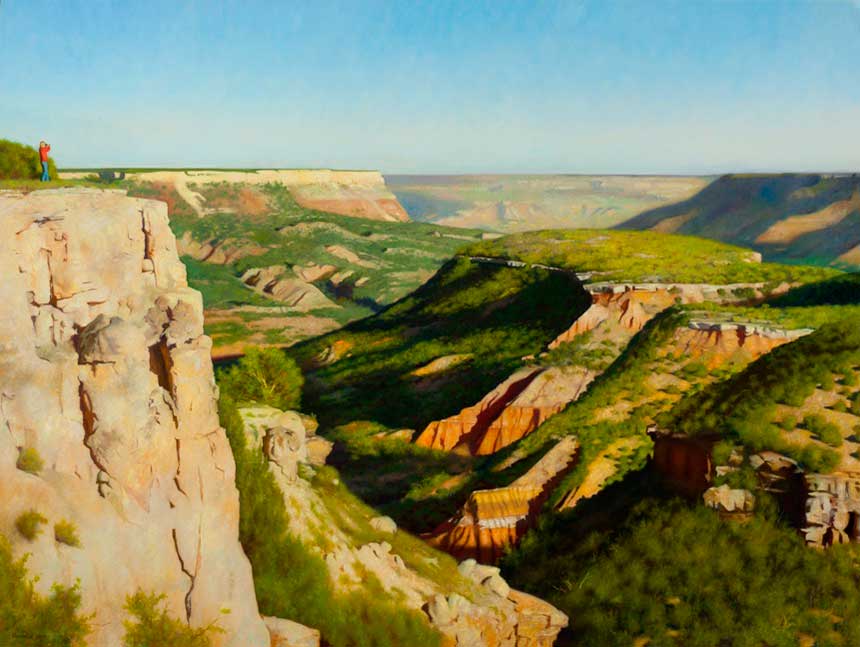 Can you describe the training process he put you through?
Simply put, the training was geared to teaching one to see. Lack taught his students to paint and draw what they saw rather than what they knew. This was a revelation to me, to close one eye, squint (or throw the eye out of focus) and record what I was observing in relation to its surroundings. So much could be said about this but behind all of our studies was a method previously unknown to me, sight-size. This amazing and revolutionary (to me) way of observing nature allowed me to see my subject next to the canvas and make observations while simultaneously viewing both. Lack taught design, color value, perspective, anatomy, memory work, harmony, balance, and many other elements of the painter’s craft but at the core of it all was observation of nature using the sight size method. It truly changed the way I saw nature. Phrases such as, “paint it as a piece (meaning to not just paint the object itself but also the background behind it, the edge of the object next to it- again paint it as part of a larger whole, a piece of nature and the atmosphere and elements around it), look away from the object to see it in relation to the whole, bring it along as a whole, paint across the form – not along the form, look for the straggler, try to see the compliment, make it out of paint, and look at your subject-not into it” became phrases that carried specific and important meanings — phrases and meanings that previously were unknown to me. Lack always said, “the eye should progress faster than the hand,” meaning your ability to see should advance ahead of your ability to do. That way you are always dissatisfied and aware of the need for great effort to have your dexterity or abilities catch up with your eye. In other words, never be satisfied and always strive for more.

The eye should always progress faster than the hand.

Can you describe your typical process for doing a painting from life?
Now, as a professional artist for the past 35 years, I still use what I call an adapted form of sight-size. I don’t necessarily do all the tedious measuring I did as a student, but I still set my canvas where it is beside my subject so that I can see both in a single glance. This is crucial for me to see shapes, color, and all the other elements pertinent to observing relationships. 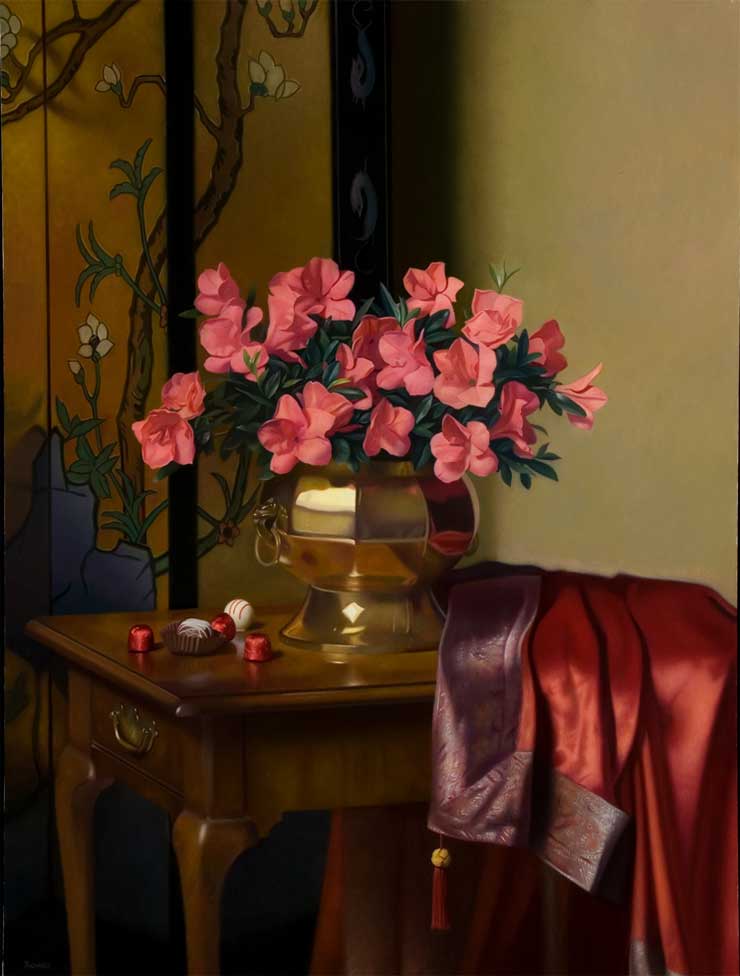 Are there some key pieces of advice that you would give a beginning student?
I summon Lack’s advice when I counsel a young painter or when I teach. In his seminal booklet, On the Training of Painters, he put it like this:
“If ever there was a secret to the old masters, it was surely their ability to see . . . Seeing, however, requires the most diligent and tireless effort and should be given top priority. I can do no better then quote from Daniel B. Parkhurst’s The Painter in Oil, ‘The student’s first aim is to learn to see and represent nature’s facts, to distinguish justly between relations. It is the training of the eye and the judgment. Imitation is not the highest art, but the highest art requires the ability to imitate as a mere power of representation… To bring out the beauty which may lie in the fact is the aim of the artist. To acquire the ability to do this is the aim of the student.'”

These are profound words for the student to understand his or her goals and responsibilities. I can also do no better than Parkhurst. 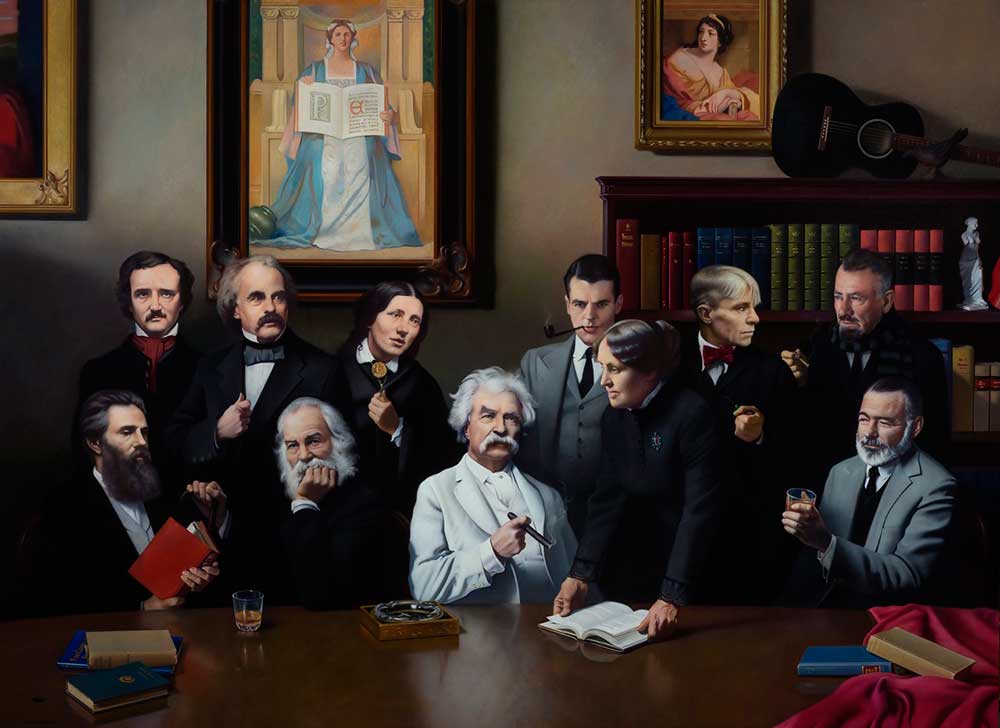 How about someone who has just finished their training?
To the young painter who has completed a sound training, my advice is two-fold: 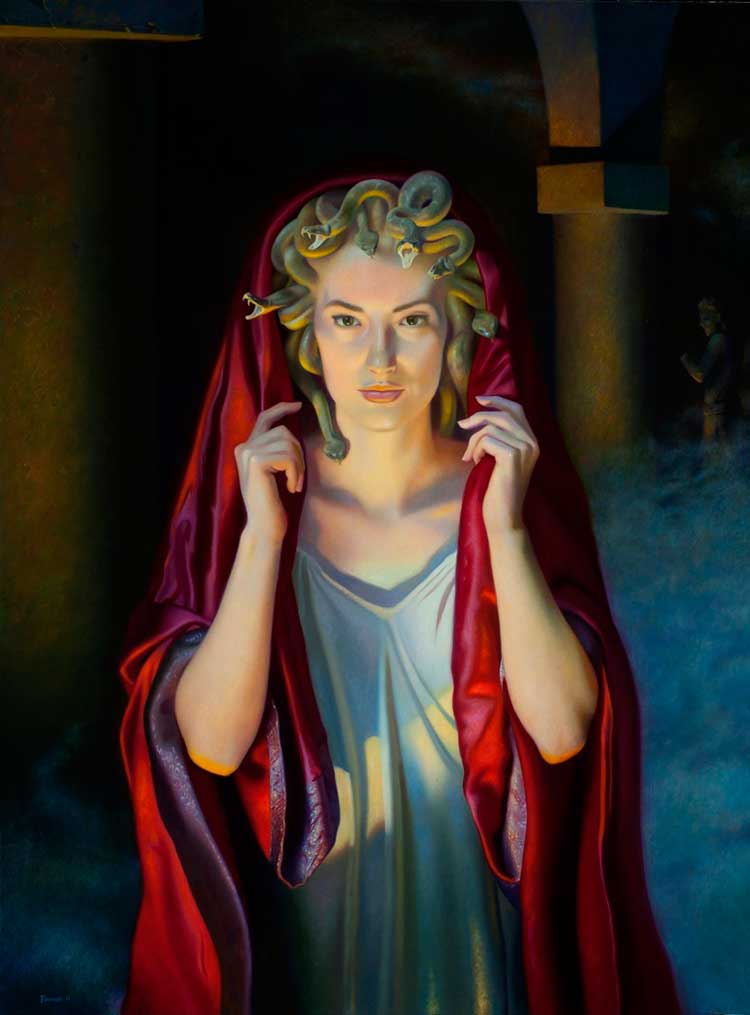 What led you and Steve Gjerston to write a book?
While a student at Atelier Lack (1976-80) I met artist Stephen Gjertson who also studied with Richard Lack and had finished his studies in 1975. Although we were not contemporaries as students (I began my studies the year after he completed his), we became friends based upon both our times at Atelier Lack and our shared Christian faith. In 2001, I began writing an informal essay on my thoughts of the art world and painting in general. I mentioned this to Steve and he said that he too was putting thoughts on paper of a similar nature. He suggested that we expand and amplify our thoughts and produce a book. This effort resulted in the book, For Glory and For Beauty; Practical Perspectives on Christianity and the Visual Arts. The Newington Cropsey Foundation in Hastings-On-Hudson New York published the book in 2003. It was the first such volume written by two practicing, professional artists and it reflects our beliefs concerning art and its place within the sphere of art and Christianity. As Steve once said, “We included something to offend everyone.” I am not sure that’s correct but we posited our strong beliefs concerning art and its impact on our culture. It was an experience I thoroughly enjoyed and hope to never repeat. 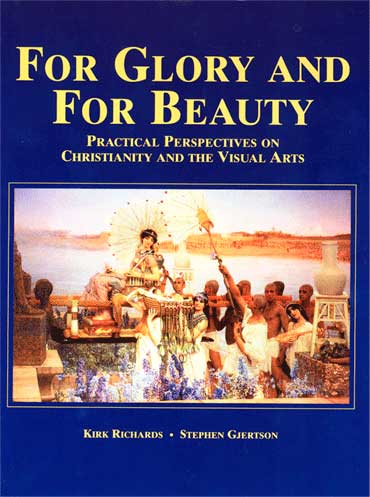 100 years from now, what would you like people to say about you in regards to your work?
As for my legacy, it is enough for me if people think I did the best I could on every painting and that I tried to do artwork that is beautiful and edifying to the viewer. There is enough of the ugly and perverse in the world and I attempted to do work which would uplift, not depress. As Ingres was quoted saying, “The Ugly: Men go in for it because they do not see enough of what is beautiful.” My hope is that my paintings will be seen as an attempt to portray the beauty in this world, not the ugly.

Industry and talent are both required for the production of great art. It is an elusive and at times a maddening goal. But the basis for any great art is a firm foundation. As stated so eloquently by J.L. Gérôme, “It is austere and profound studies that make great painters and great sculptors; one lives all one’s life on that foundation and if it is lacking one will only be mediocre.” 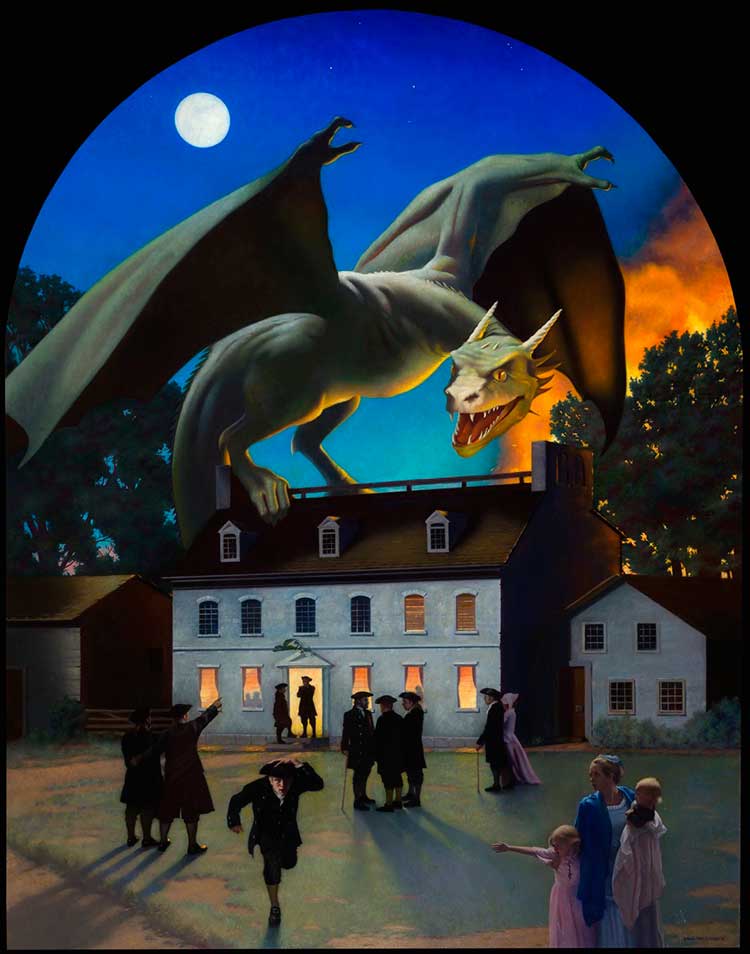