Article by Darren Rousar. Most recently updated in January of 2022. 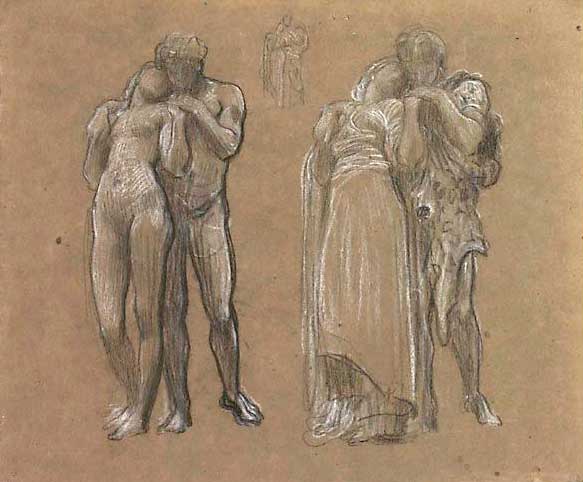 On my first trip to Europe (back in 1988) I was introduced to the curator at the Leighton House Museum in London. I no longer recall his name but I do remember that he was kind enough to take me downstairs and leave me alone in a room filled with flat-files of Leighton’s drawings. I spent an hour there and left astonished (as well as empty-handed, I promise).

One of the things which impressed me was the small size of the drawings. To be sure, many of them were simple sketches, nothing more than charcoal and chalk on toned paper, but a few were more finished. I seem to recall the largest of the finished drawings being about ten inches high.

In fact, when I saw other old master drawings on the trip I was often surprised by how small they were compared to my expectations.

Walter Sickert, student of Whistler, commentator and an acquaintance of Leighton’s, had much to write about seeing and the proper size of a pencil drawing. His recommendations largely parallel my own training – eight to ten inch high pencil figure drawings. However, as you’ll see below (in italics), Sickert was less than enthusiastic about doing larger figure work from life.

“What is drawing?”
Strange that such a question should have to be asked. But some of us have forgotten. Drawing is the extraction from nature, by eye and hand, of the limiting lines of an object.

In drawing a whole figure from nature we should be three times its length from it, to oversee it properly (Leighton told me that, a more than sufficient authority). If we draw normally, we must draw on the scale on which we should trace, if our sheet of paper were a sheet of glass held up, and if, instead of a pencil, we traced with a diamond on this interposed pane. You will find that a five-foot figure then comes about seven inches high on your glass, or its substitute, your paper.

On this scale the comparison is direct and not proportional. On this scale, and, largely, in accordance with this law, are drawn all the studies from nature by the masters of all periods. Of course, I am not speaking of cartoons. The studies I speak of could be squared up and enlarged to cartoons on any scale required for decoration in fresco, or on great canvases. 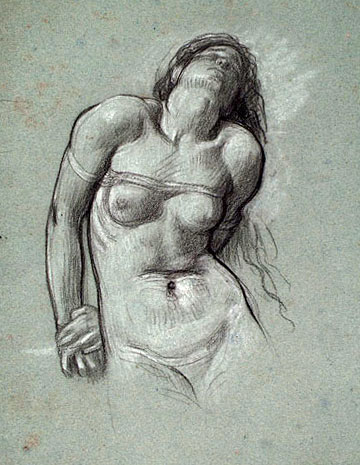 A figure drawing by Leighton.

Now, if Rubens and Longhi and Watteau and Fragonard and Ingres and Millet and Puvis and Keene, and all the company of the blessed drew on that scale, they probably knew what they were about, and their practice was probably based on the ascertainable optical fact to which Leighton drew my attention in Osnaburgh Street many summers ago.*

But some betterer of the good, or some betterers of the good, in the beginnings of the atelier system, started students all drawing figures on a uniform scale dictated by what? Neither by nature and optics, nor instinct. Dictated by the arbitrary size of a paper manufacturer. “You must fill your sheet of Ingres paper,” said the original arch-usher of accursed memory. The word “Ingres” should have pulled him up as it passed his temerarious lips.** But to your original arch-usher, as to his successor, words have no association and not much meaning.

Drawings or paintings from objects should be made on the scale that those objects would cover, were the student’s sheet of paper a sheet of glass, and were it held at the distance from the eyes of the student at which his drawing board or canvas are placed.

One point it is very important to insist upon. Drawing on the scale of vision is only necessary in work done direct from nature. But in drawing from nature the image on the eye and the image on the paper or the canvas should be as nearly as possible on the same scale.

Let us imagine for a moment two frames set up between us and the cast or the model, these two frames equidistant from our eyes. Let us suppose that in the one frame is fixed a board with a sheet of paper, and in the other a sheet of glass. Now let us imagine our two wrists handcuffed with a rigid steel bar so that they could only move in unison, after the manner of the two legs of the instrument called a pantograph. In the one hand we hold a diamond and in the other a small pencil. As we now proceed to trace with the diamond the outline of the model on the sheet of glass with one hand, with the other, by a series of parallel and identical movements, we trace with the pencil the same outline on paper. The comparison between these two drawings would in this way be direct and not proportional. The more or less clumsy mechanism of this illustration shows what should be the operation we accomplish by brain and eye when we draw from nature.

A reclining figure by Leighton.

Consider for a moment the immense and useless work thrown on the eye and the mind when, as in the scale of most art-school drawings, at each turn of the head, a proportion sum has to be improvised, and to what purpose? If a cartoon of any size is required from the studies, they can always be squared up. . . I believe that hundreds of students have been permanently broken and deviated from the normal path of natural drawing by the Procrustes bed of the manufacturers sheet of so called Ingres paper.

Leighton reminded me some thirty years ago that in order to see a six-foot man properly you must be eighteen feet away from him. Hold up a rule at that distance and see how much the model subtends. A matter or nine or ten inches. Why are we, then, to fill a piece of Ingres paper (and make him thirty inches high) that is three times the scale of our vision? 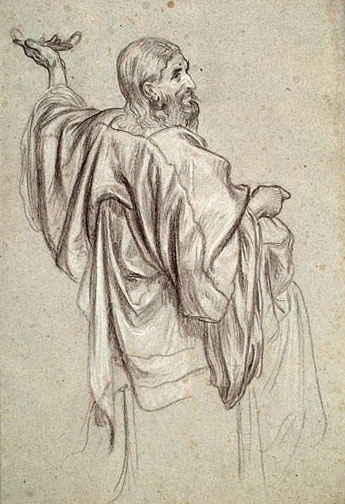 A drapery study by Leighton.

[T]he students that I have formed during the last decade are, some of them, already teachers. They are already insisting on the scale of vision, and the uniform scale of the drawing-board is good as dead.

Sickert’s instructions for how to go about drawing the figure, attributed to Lord Leighton, are textbook Sight-Size. True enough, putting your easel eighteen feet away from the model and then standing an arm’s length away from it, results a seven to ten inch figure. But what he seems to have missed (or chose not to mention) is that the scale of vision is not merely the result of an arm’s length. By pushing the easel closer to the model, while still viewing the two from the same vantage point as before, one can easily fill a sheet of Ingres in the scale of our vision. 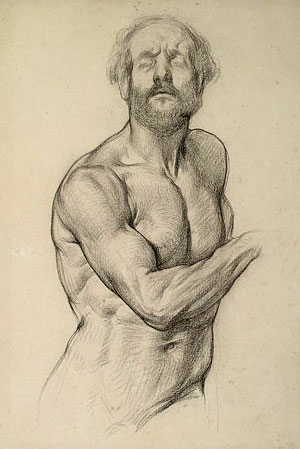 A figure drawing by Leighton.

Of course, to get from the viewing position to the easel, one has to walk back and forth. This drastically cuts down on the number of students you can pack around a model. Drawing large, in the scale of your vision, requires space.

In Sickert’s time, as now (and perhaps ever since the first academy, centuries earlier), money often dictated class-size. The more students you have the less likely it is that scale of vision could be a concern. This is amply demonstrated in any number of photographs, drawings and paintings done of scenes showing students doing figure work. 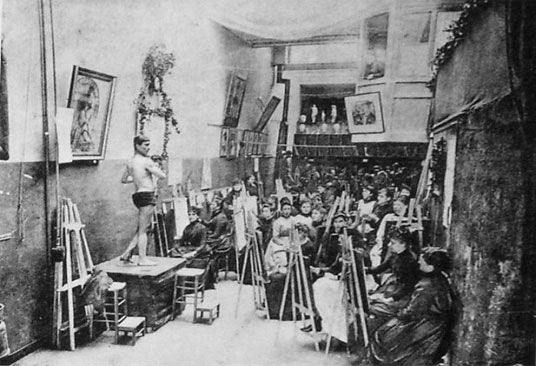 In my experience, to allow each student full visual access to the model, the figure-class limit is around sixteen students. This number would let the students work larger than the proscribed seven to ten inches and assure that the background behind the model was still in view for each. In other words, the students would not see the other students directly within their field of vision.

All of the drawings in this post are by Frederic Leighton. If you have a few hours, take a look at this site here for an amazing collection of Leighton’s drawings.

*In 1890 Sickert was sent to draw a portrait sketch of Leighton for the Pall Mall Gazette. The sitting took place in the sculpture studio of Leighton’s ‘protege’ Thomas Brock at 30 Osnaburgh Street, Regent’s Park.