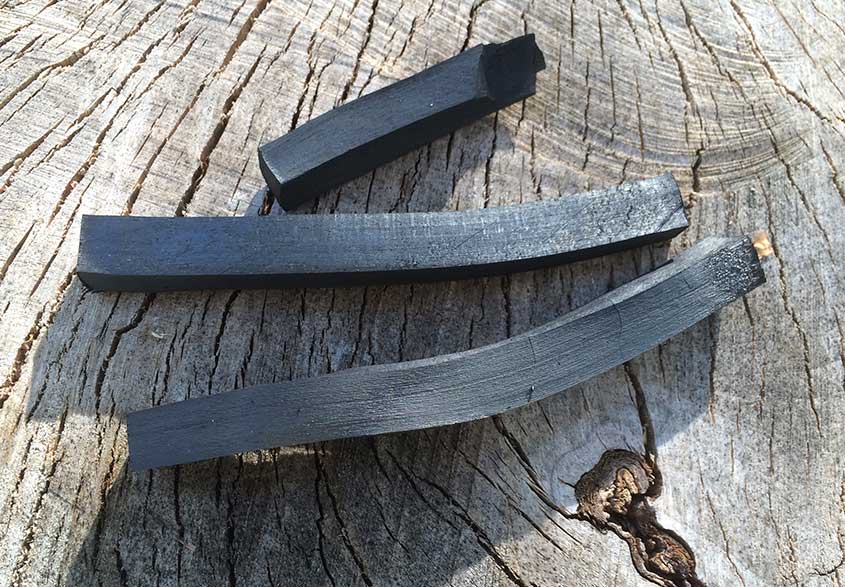 While there was a time when chalk was preferred, charcoal is the now most common drawing medium used in ateliers. In fact, it is one of man’s earliest drawing mediums, as evidenced by many cave drawings as well as the ease with which simple charcoal can be produced – the remains of a campfire.

This article will teach you how to make your own artist’s charcoal, which is something quite different from a burnt stick.

But before I go further I should state that there is no real need to make your own since perfectly good artist’s charcoal is readily available (like Nitram). That said, making charcoal is something which can be done without much expense. And, in my opinion, is quite fun. I suppose that, with more experimenting, I might find a species or part of the process which would result in something superior to store-bought charcoal. At this point, however, I can simply equal it.

The beauty of charcoal is manyfold. It is capable of producing fine lines as well as a smooth tones, all in varying degrees of value. Charcoal use for figure studies may also have contributed to a change in how form was represented in drawing during mid-nineteenth-century France. Turning form via lines, as an engraver would, gave way to a more painterly method, one of smoothed tones. Its ability to produce subtle gradations also caused many artists of the time to choose charcoal for landscape drawing. A textbook of sorts, Le Paysage au Fusain written in 1874 by Auguste Allongé, promoted the use of that genre to the general public.*

Fusain is the French word for charcoal. At least that’s how it is currently interpreted. In the past it was the French name for a little tree that in English is called a European Spindle tree. Spindle trees can be found throughout much of the world, although they are not native to the US. Its wood has many uses. One such use is for artist’s charcoal.

To make your own charcoal, all that’s required is stock, an airtight, fireproof container, and fire.

For stock, just about any wood will do. As mentioned above, spindle wood is often used, though willow and grape vine are also quite common. If you use wild stock, be sure to avoid new growth (it does not char well) and peal the bark off first.

Rather than use those woods, I used maple and oak for my experiments. My intent was to see the results from harder woods and also to compare those two species. Initially I planned on cutting branches from one of our maples, but eventually decided to use dried stock from a lumber store. The thought was that the resulting sticks would be straighter than when using live wood.

Charcoal, raw stock. The lighter wood is maple and the darker is oak.

You can buy pre-sawn oak, maple, and other species at many hardware stores. Just be sure that you’re not purchasing treated lumber (like regular 2x4s).

The fireproof container (a kiln) became a bit of a self-induced challenge. I wanted to actually see the process unfold and therefore began with a glass canning jar. As you might have guessed, that cracked halfway through the burn. Tin foil (sometimes recommended on the internet) failed even quicker, regardless of the number of layers.

My eventual choice was a paint can. Empty ones (gallon or quart) can be purchased at most house paint supply stores. Make certain to get the lid as well. Where I bought mine, for some reason none of the cans had handles. A handle would have made things a bit easier.

For fire, any campfire will do. The important aspect here is you need to be able to maintain a good fire for about two hours.

The first step is to prepare your stock. The stock I used had been milled to 3/8″ thick boards. I then cut those boards into 3/8″ strips. Finally, I cut the strips to roughly 5″ in length. My thinking was that the wood’s dimensions would shrink as it charred. It did, but not nearly as much as I estimated.

To prepare the container is simple. Take the top and, using a hammer and nail, pound about five holes in it. Though the charring process happens in a non-oxygen environment (inside the closed can), as the can heats, gasses need to escape. The nail holes allow that to happen.

Since I was testing two different species of wood, I needed a way to keep them separate within the can. Once charred, the sticks will look quite similar to each other. The solution was to use two, smaller cans (of beans, I think they were) within the gallon can – one for the oak and the other for the maple.

Once each can was packed with the cut sticks, I placed the smaller cans into the gallon can and pounded the lid closed. 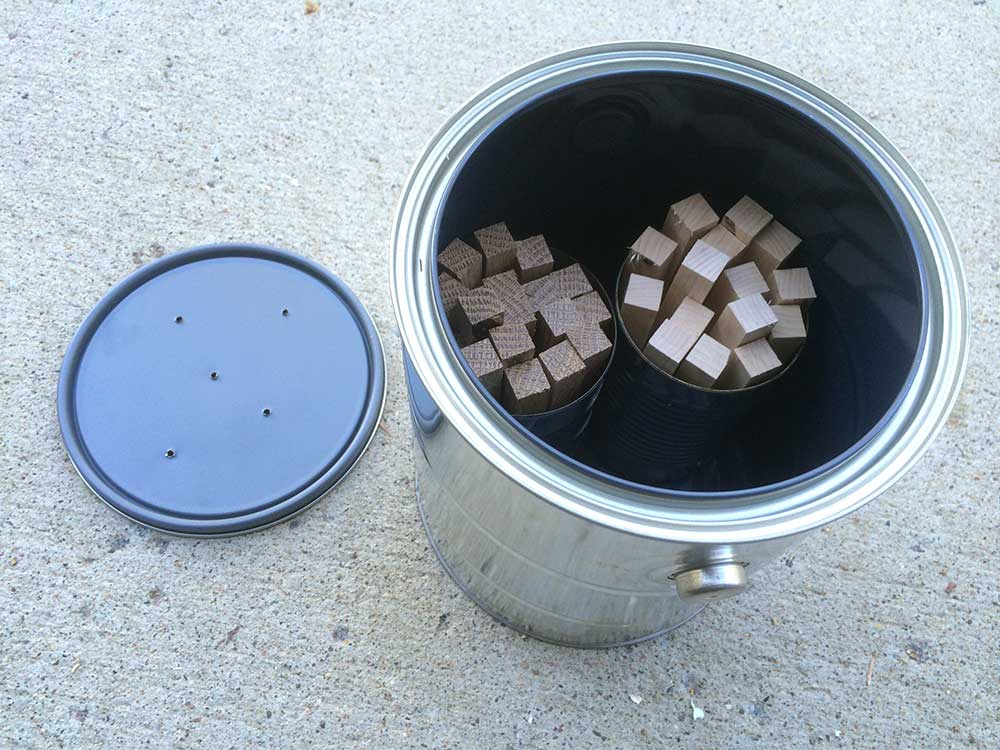 The stock in their various containers. The oak is on the left and the maple is on the right.

I think it helpful to have a good fire burning well before placing the can in the middle. When you’re making a fire you oftentimes need to move material around to get it going and the can would get in the way.

Once the fire is going without needing much attention, use a stick to clear a space in the middle. Place the can in.

I used an infrared thermometer to test the heat of the fire and the can. This is not necessary but my inquiring mind wanted to know. Once up to the temperature of the fire, the can’s heat ranged from 350°F to 1000°F throughout the process. The average range was between 450°F and 700°F, which is what I was after. If you can test the temperature, you’ll eventually get the hang of where and when to place the logs in order to maintain some control. Regardless, I do not think this is critical to the process and that control is limited anyway. 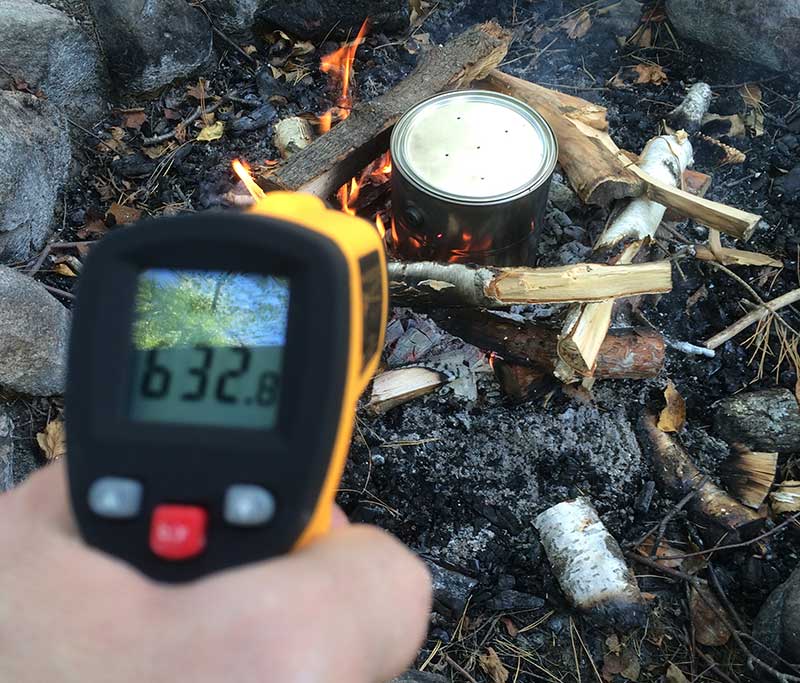 Checking the temperature of the charcoal kiln with an infrared thermometer.

After about thirty minutes of heat, the can began to off-gas. At times this was audible, as you can hear in the video below. I’ve no doubt that the gas is toxic, so try not to inhale.

After another twenty minutes, I got curious and removed the can from the fire. Twenty minutes of cool down later and I opened the can. Unfortunately, the wood was not yet completely charred so I resealed the lid and put the can back in the fire for an additional fifty minutes.

Another cool down period and success! 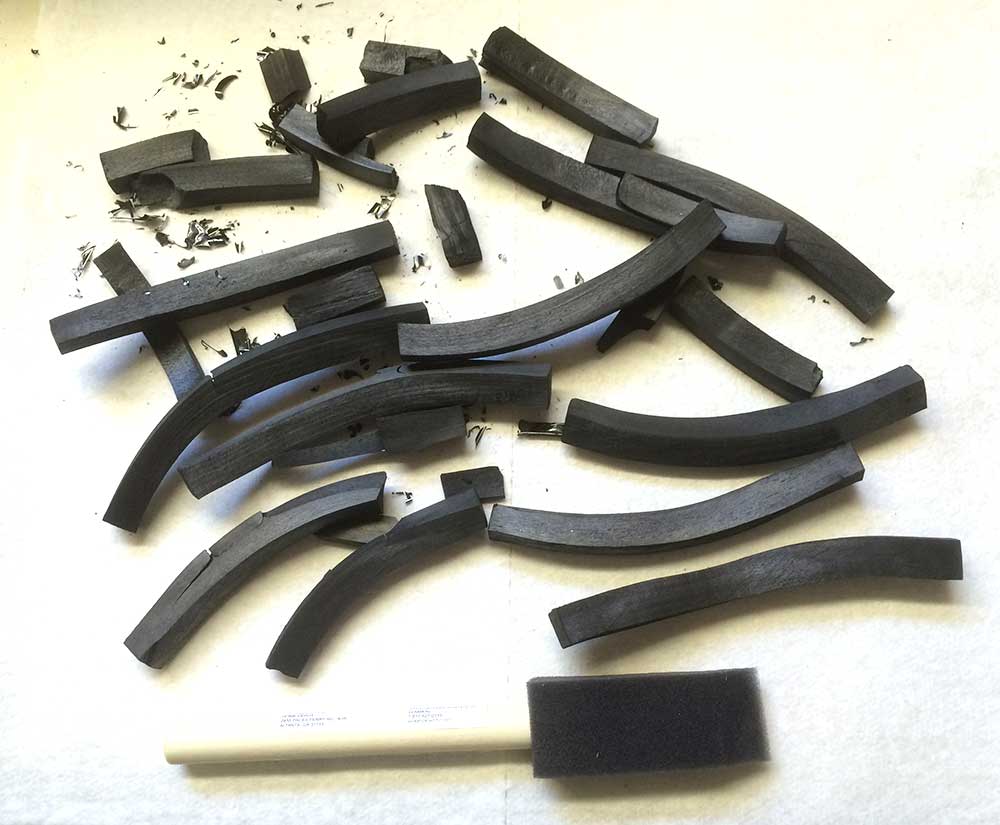 Finished maple charcoal sticks. The foam paint brush is for size reference and the little bits are part of the can.

Some sticks cracked and there was a lot of warping. My sticks were also noticeably harder than store bought. The hardness is unlike vine charcoal though. In other words, with a stick of maple I can get the value of a soft vine, and yet the maple stick is more dense. The oak was even harder, so much so that I did not want to spend the time to sharpen it. A few scratches with a corner, however, resulted in lines which were akin to store bought hard charcoal. 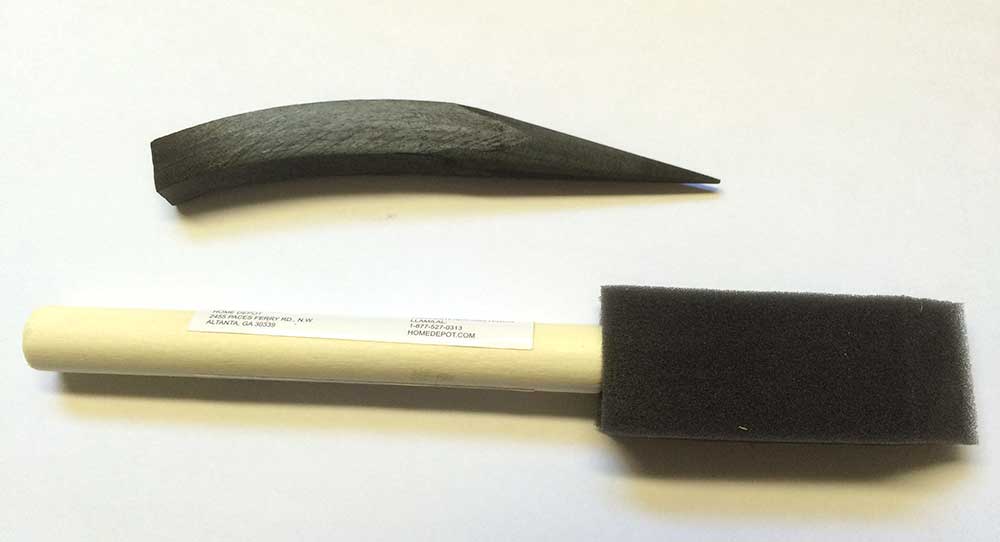 A sharpened, homemade stick of charcoal.

My sticks also did not shrink as much as I had expected. That became a problem as the oak, mentioned above, was so hard as to not be worth the sharpening time. If I do this again I’ll use thinner stock to begin with.

I would also try to pack the sticks more securely into the can. There was some give and I think that allowed much more warping than not. I assume that manufacturers put their sticks into individual tubes to keep them straight. That’s a guess though.

Still unknown, to me anyway, is exactly what temperature is necessary, as well as what is the proper length of burning time. Would narrower sticks require less time? Does more time result in a softer stick?

Update: One of my friends from Florence (Matthew Collins) seems to have preceded me in this endeavor. He writes, “In my experience the sticks curve if they get too hot. Also a good way to check if the charcoal is done is to ignite the smoke. Once the flame dies the charcoal is done!”

“To be precise, white smoke is mostly water vapor, so it will not ignite immediately. Within that smoke are flammable gasses (essences) that might spontaneously light up or you can do it. Once the flame dies out all that remains in the box is carbon. And be careful with the 5 holes in your box. A circular movement of air could be created and burn the charcoal within the box. It is better with only one exit.”

*An artist who works primarily in charcoal used to be called a fusainiste.