Article by Darren Rousar. Most recently updated in June of 2021.

This article happens to be part 1 of a series on modeling. Part 2 is here, part 3 is here, and part 4 is here. 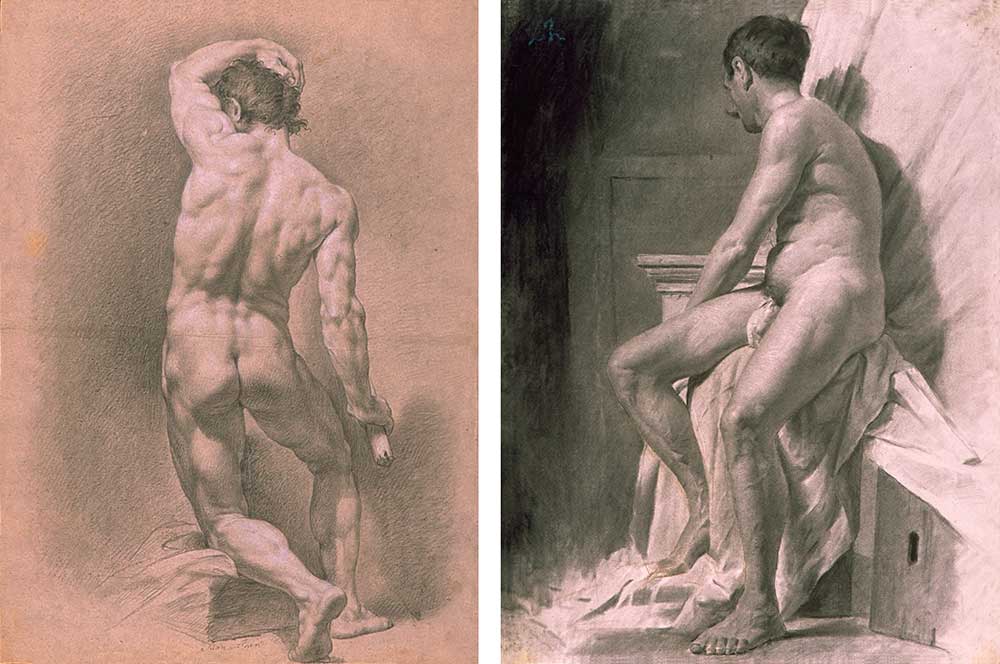 The images shown above are of figure drawings by students from Madrid’s Real Academia de Bellas Artes de San Fernando. The one on the left is from the eighteenth-century and is representative of the form over value approach to modeling (the basis of which is explained below). The one on the right is from the early twentieth-century and is representative of the value over form approach to modeling (explained in the article Modeling: Value Over Form).

Modeling is the act of turning form through value or line, a process which is integral to representing your impression of the scene as well as the illusion of form. Although there is some crossover, there are essentially two approaches to modeling: form over value, and value over form.1 As its name implies, form over value modeling tends to prioritize the representation of form over that of value. The opposite is true for value over form modeling.2

This article explains a common version of the form over value approach to modeling, which is a way of representing form based upon an understanding of how light interacts with the structures or planes on the subject. It is more commonly known as conceptual modeling, or conceptual seeing.3 At times this can be quite complicated so I am going to oversimplify it in the examples which follow. I will also use the term facet when I mean plane because facet is more easily understood in the example. However, relative to drawing and painting, plane is the more commonly used term.

There are four basic laws of light upon which the form over value approach is based:

A series of spheres, subdivided into facets.

Once the column of light hits the sphere, the individual beams bounce off of whatever facets they hit and those reflected beams keep on traveling, this time in a new direction. You, while viewing the scene, perceive the reflected beams as illumination.

When the direction of a beam reflects directly towards your eye, you perceive a highlight on the sphere. When the angle of a facet is tilted such that no incoming light strikes its surface, you perceive that facet as being in shadow. In-between are beams of light that hit the sphere and reflect back at various angles. These facts alone can help you model a form whether you are looking at its source or not. 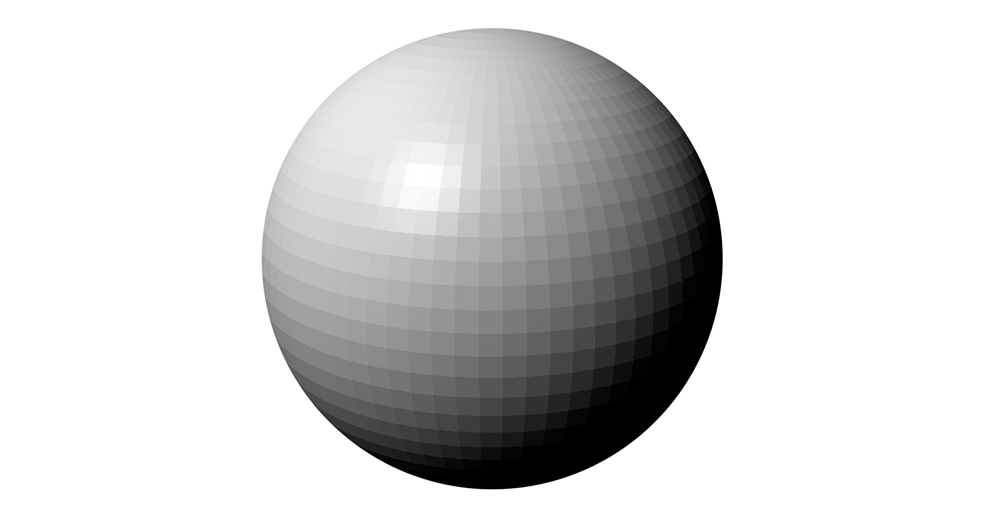 A sphere divided into 75 facets.

Form is perceived, and modeled, within the zone of light. Artists divide this zone into highlight, light, and halftone. Some further subdivide those into smaller increments. As the angle of the facets tilt away from the light source, the values we perceive them to be become darker. This is called light fall-off. It is important to know that light falloff is not linear. In other words, the value change is not in an even progression.4 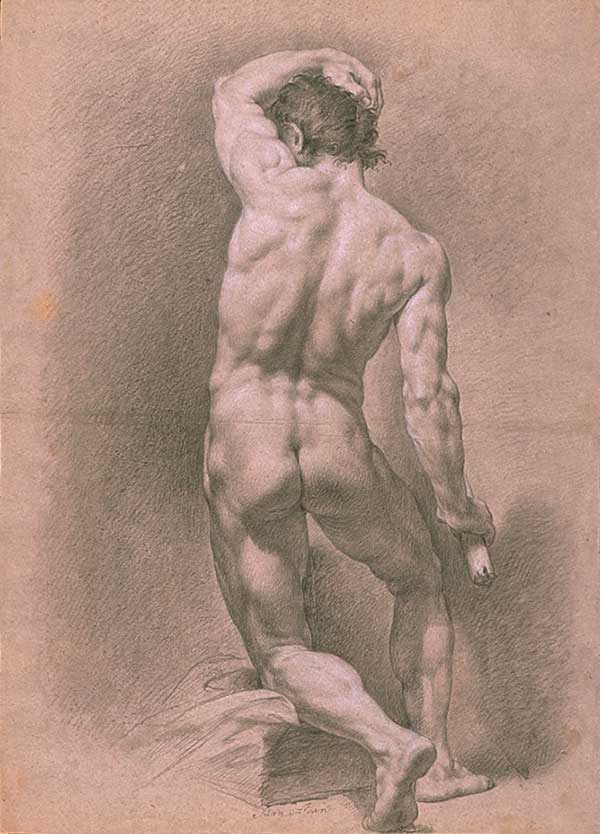 This drawing, by the Spanish artist Juan Adán Morlán (1741-1816) is typical of the style of figure drawing that was taught in the seventeenth and eighteenth centuries. A beautiful drawing though it is, note that each subform (especially in the back and arms) appears to be separately modeled. Did Morlán model through facets, as I describe in this article? That’s unlikely, as form over value through facets is a relatvely recent approach. More likely is that he based his form observations on his knowledge of anatomy.

There are many ways to model via form over value: from using facets, to sections, to anatomy. Although I do not model in any of those ways myself, nor teach them as such to my students, many do. Therefore, a simplified version of one that I have learned is as follows.

Before you would begin to model, and perhaps before beginning the main drawing or painting itself, you would likely sketch a small value study of your subject. The purpose for doing this sketch is to acquaint you with the general direction and flow of light across the subject (which again is called the light falloff).

Next, on your final work surface, you would define the outline of the subject as well as the precise location of the terminator. The terminator defined the main division of light and shade so it is now time to begin modeling the forms.

Strips from a cylinder, subdivided into facets.

For the strip approach, you would first imagine the subject as a series of individual strips that follow the path that the light takes across the form. These might be strips across the entire subject or be restricted to each subform of it. The orientation of the strips is based upon the overall range of value on the subject, with the best choice having the largest range from dark to light. Oftentimes this results in strips which are at an angle perpendicular to the direction of the light source. You might actually indicate the edges of the strips, very lightly on your drawing, or you might simply keep them in mind as you model.

Each strip is then imagined as a series of facets, angled towards or away from the light source. You might even lightly draw the boundaries of the facets in as well.

To actually begin modeling you would choose a strip with which to start and flatly shade in the facets on the strip which are in shadow. After that you would model (shade) towards the light as evenly as possible, getting progressively lighter until you reached the light area represented on the strip. Your intent is to model to such a degree that the visual implies the tactile – it looks like how it would feel. Throughout the process you would try to think both about the turn of the form, as would a sculptor, and the flow of light through its angles of incidence and reflection. Your observations, filtered through your knowledge of light, would influence how dark or light you should shade each facet.

After the first strip is initially modeled, you would then do the next strip (or subform within the strip) and so on.

Once all of the strips are modeled, you would darken the shadow facets again, this time smoothly blending them into the next lighter value. Finally, you might need to lighten whatever highlight is visible in the strip.

An alternate version of form over value modeling is shown in the image above. Instead of modeling via strips, this approach uses sections of the subject. Once the shown section was fully modeled, the artist would then move onto another section of the subject.

A few things should be obvious from the preceding explanation. One is that in either case, strip or section, it is piecemeal seeing as well as modeling. Mitigating that is one reason why the aforementioned thumbnail sketch would be created. As you model, you will reference it to help you maintain the big look of light and shade. Additionally, after modeling a few strips, you would go back to the preceding strips and correct any errors and aspects which did not properly connect them with the others.

This process of modeling is also a version of window shading. Normally, window shading is done in a top-down manner. But it can be done from any direction and in strips or sections. Modeling errors inherent in the process I outlined above are corrected, hopefully, as you go over the strips for a second and third pass, as well as by continually referencing your thumbnail value sketch.

Finally, I have a number of friends who are being taught to model using the form over value approach, or who use it professionally. All agree that although visual perception is important when modeling through form over value, the last word on the matter is always the conceptual.

1These distinctions should not be considered exclusive. Nonetheless, they do represent two schools of thought whose approaches to seeing, and therefore modeling, are sometimes worlds apart.
2Most Sight-Size artists are taught to model almost entirely relative to their visual impression. Therefore, beyond the basic concepts of light and shade, I do not normally explain the form over value approach to my beginning students. Instead, I prefer to have them learn how to see before they delve too deeply into the physics of light. To see why, read through A Missing Clavicle and an Educated Eye.
3There is nothing about the form over value approach to modeling which precludes it being used when in Sight-Size. Having said that, I think your mind would more easily get into the thought process of it if you were using a Comparative or Construction method to draw because they are more conceptually-based than is Sight-Size.
4Ignorance of the concept of light falloff is the primary cause of over-modeling (making the halftones too dark) in form over value drawings and paintings.
5Special thanks to Dr. David Briggs, Alex Haskel, and Ramón Hurtado.

In case you missed it, I explain value over form modeling in this article here. Or, you can learn more about it in The Sight-Size Cast.