This article happens to be part 2 of a series on modeling. Part 1 is here, part 3 is here, and part 4 is here.

The images shown above are of figure drawings by three different students from Madrid’s Real Academia de Bellas Artes de San Fernando. They are from 1902, were drawn during the same model sessions, and are of the same model. Each represents a value over form approach to modeling.

Most Sight-Size trained artists model using the value over form approach. Modeling in this way helps the artist maintain the big-look (which is representing the image as a whole ensemble), as well as the unity of effect. This approach naturally reduces the chance of falling into piecemeal seeing.

In a previous article I wrote that the form over value approach to modeling is based upon an understanding of the light’s path as it hits the form and then reflects back to the viewer’s eye. Modeling then is therefore usually done via strip, section, or muscle. The goal in that case, and if we had to reduce it to only one, is to represent the illusion of three-dimensional form on a two dimensional surface.

Conversely, the value over form approach relies entirely on the artist’s ability to correctly perceive the relationships of observed shapes and values as they are actually seen on the subject. Representing those observations occurs in a way that often separates what the subject literally is from the abstract shapes and values which, when combined, allow us to recognize it. This artist’s goal is to represent his or her vision of the subject as he or she visibly saw it.

So, how does one go about actually doing that?

The basic approach to modeling in value over form is to relate every value observed in the scene to all of the other values observed in the scene. Those relationships are then represented in your artwork at whatever relative gamut your medium can manage. After establishing the arabesque (outline) and bedbug line (shadow line), you would begin massing-in the observed value extremes: the darkest dark and the lightest light. 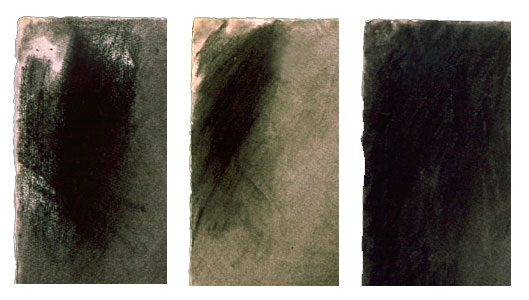 Notice, in the details of the figure drawings shown above, that each has a very dark area indicated in the background on the upper-left. Those, I believe, were the darkest darks in the scene as observed by each artist. Presumably they were deeply shadowed areas of the room behind the model stand. White chalk served as the lightest lights, as is evident in the highlight areas of the drawings. Note as well that the students were working on a toned paper, which was left untouched in certain areas. 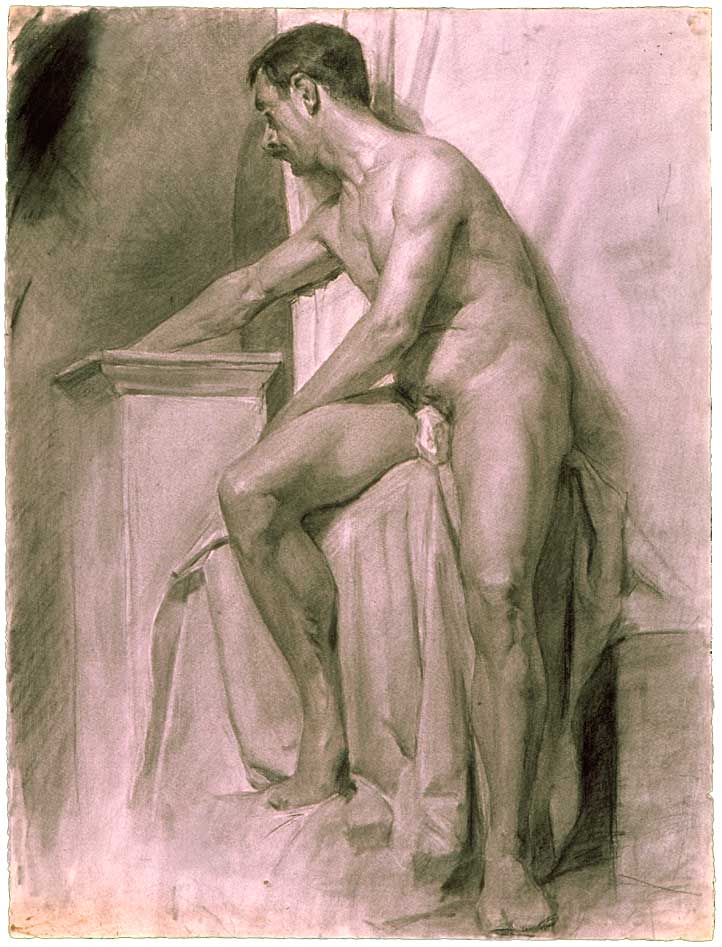 Above is the middle drawing of the three examples. I chose to focus on it because the figure is unfinished. Due to that state, the lower legs, from the knees down, and the model’s right arm show us how Roldán went about the process of modeling this figure.

As explained, once the arabesque was established, the bedbug line was accurately located. This is still sharply evident on the model’s left shin and ankle. The shadow areas seem to have then been massed-in throughout.

Next, many of the darker halftones where massed-in, and some of the highlights were indicated.

From there, the indicated value areas were smoothed, the edges were turned, and the accents were strengthened.*

Throughout the entire modeling process, Roldán would have continuously compared the value he was targeting to the observed value extremes. These comparisons helped to keep all of the values relative to the entire scene. 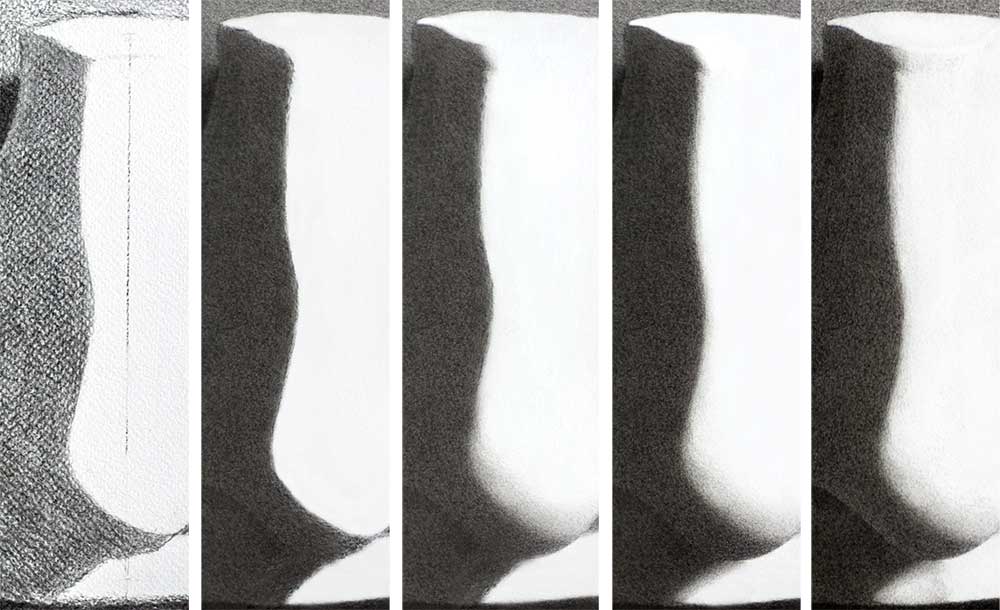 The image above shows a series of details of a cast drawing that was modeled following the value over form approach. This view is a bit false because of the cropping. I could not present such an inline series of the whole drawing on the screen at once. Nonetheless, while doing the drawing all value and edge comparisons were made relative to the entire scene.

The steps used to create the drawing were as follows (from left to right):
Image 1: The cast’s arabesque, bedbug line, and cast shadow line were determined. While squinting, I found and roughly massed-in the darkest dark (which was the cast shadow), the next lightest dark (the shadow on the cast), and the background. The value of the paper was the lightest light.
Image 2: I then strengthened and smoothed all three values.
Image 3: While viewing the scene as a whole, I determined the sharpest sharp and softest soft on the bedbug line.
Image 4: I then turned the bedbug line’s edge, relative to the extreme sharp and soft.
Image 5: Finally, I added the halftones (which are considered to be in the world of light), and the reflected lights (which are in the world of shadow), all as seen relatively to the aforementioned value extremes.

*Astute observers will notice that there is a version of window shading taking place in Roldán’s drawing. Yes, one can model value over form and still window shade. But on closer inspection you will also see that the initial massing-in and modeling was done throughout the drawing. Only after that did he begin tightening things up from the top, down. Since it is impossible to literally work everywhere at once, Roldán made the requisite choice.

This article is an edited excerpt of my book, The Sight-Size Cast.