Mr. Gammell And The Cast 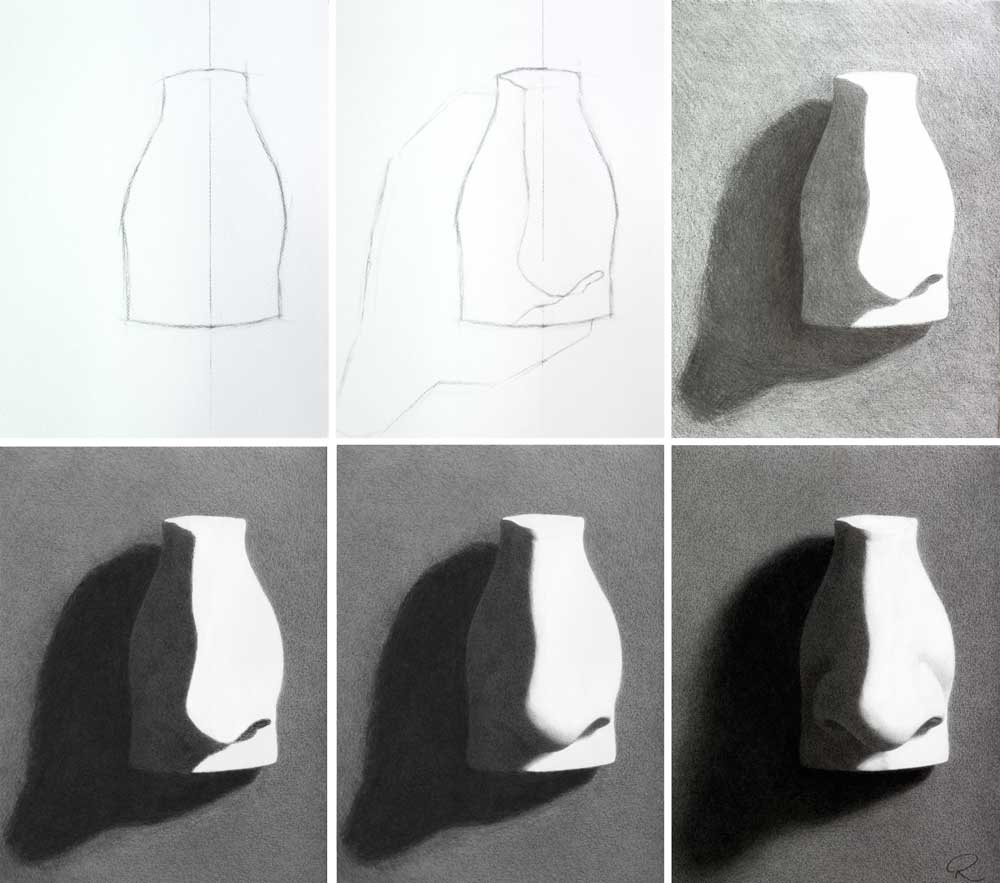 R.H. Ives Gammell (1893-1981) taught his students how to see by having them draw plaster casts in Sight-Size. To do so they were to follow specific and progressive steps. Each succeeding step led logically to the next, resulting in a finished cast drawing that was seen and rendered as a whole. This article more fully explores Mr. Gammell’s cast drawing process.*

There is one main goal for cast drawing and that is learning to see the whole. No part of the cast will be observed, or drawn, without reference to it. Doing so means that you will be in a constant state of visual comparison. Underneath that main, generalized goal are two specific ones: to see and flatly represent the main shadow shape against the main light shape, and to correctly turn the edge that separates them. All of the remaining halftones and edges must stay subordinated to those three goals.

With those goals in mind, you will arrange your cast in Sight-Size, with the cast and your easel placed directly next to each other. You will then stand back, between six and ten feet from the setup, midway between the cast and your easel. This position will give you a one-to-one view and it is from this viewing position that you will learn to see. The combination of placements and viewing position is Sight-Size.

The six main stages of drawing a cast are: 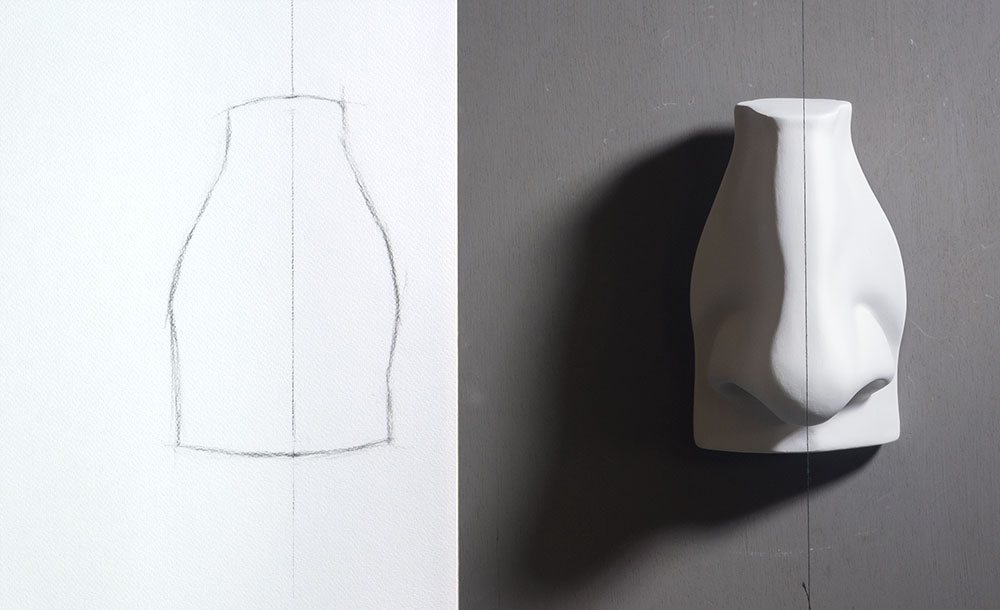 Stage 1: Finding the Arabesque
The arabesque is also known as the outline, or the contour. Mr. Gammell called it the potato shape. You find the arabesque by standing in your viewing position and closing one eye. You would then determine the placements of the top, bottom, and sides of the cast. These, each in turn, would first be guessed at and then your guess would be checked with a plumb line measurement.

Following the same process of guess and check you would continue blocking-in the cast’s arabesque. 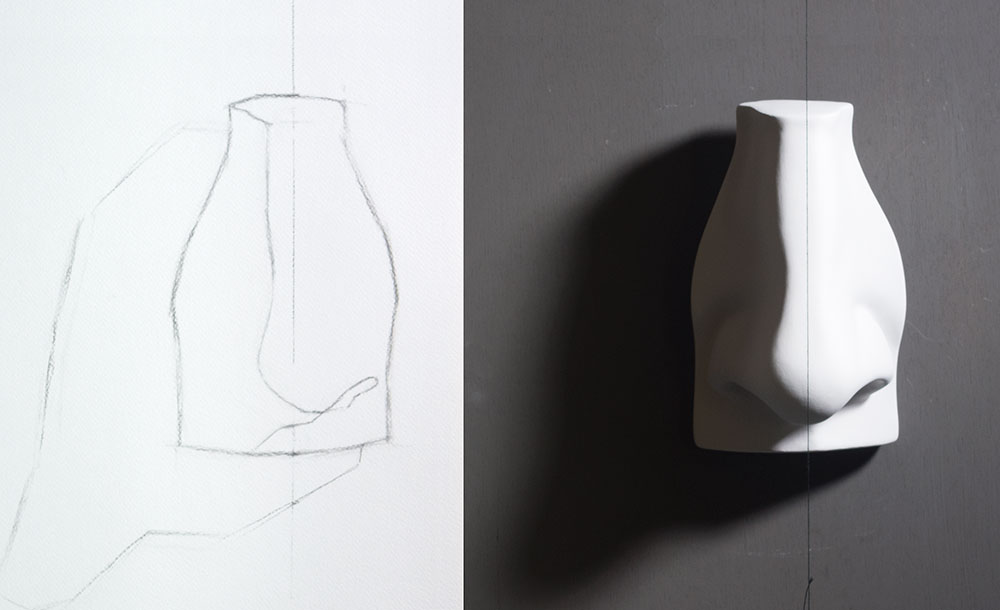 Stage 2: Dividing light from Shadow
Light is separated from shadow by a line that is oftentimes continuous. This line is called many things: the shadow line, the terminator, and the Apelles line. Mr. Gammell called it the bedbug line. You would find and draw the bedbug line, as well as the cast shadow line, in the same way as you did the arabesque. Part of that process is to remain aware of how the positions and shapes of those lines relate to the contour of the cast. 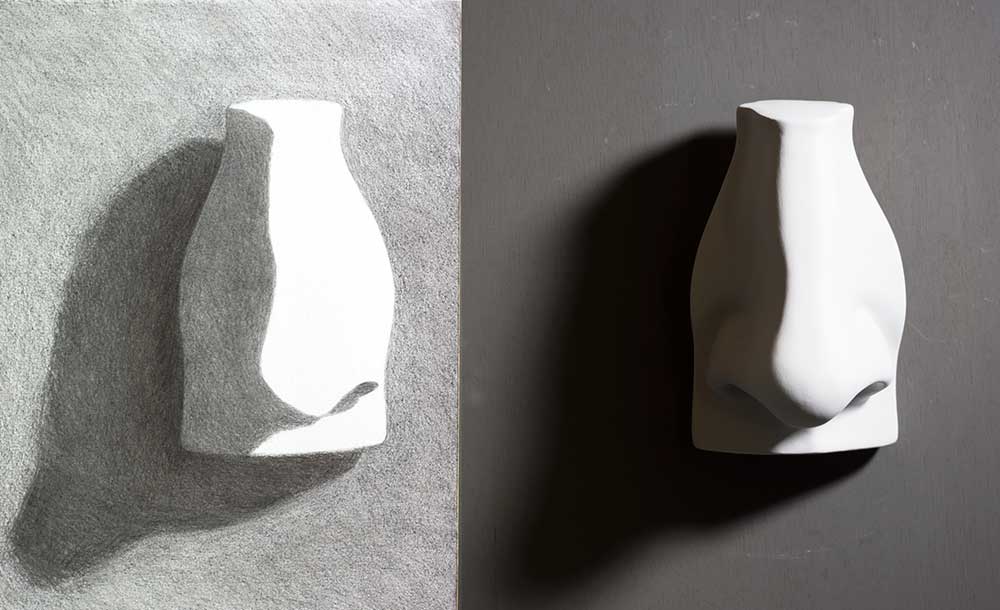 Stage 3: Flatly Massing-In the Main Shadow Shapes
Massing-in is the first stage of shading. The goal is to shade in the shadow side of the cast and the background, as simply, smoothly, and as flatly as you can. All shadows should be flat.

There is a world of shadow and a world of light. To best see the big-look of these two worlds you would squint and mass-in what you see while squinting. 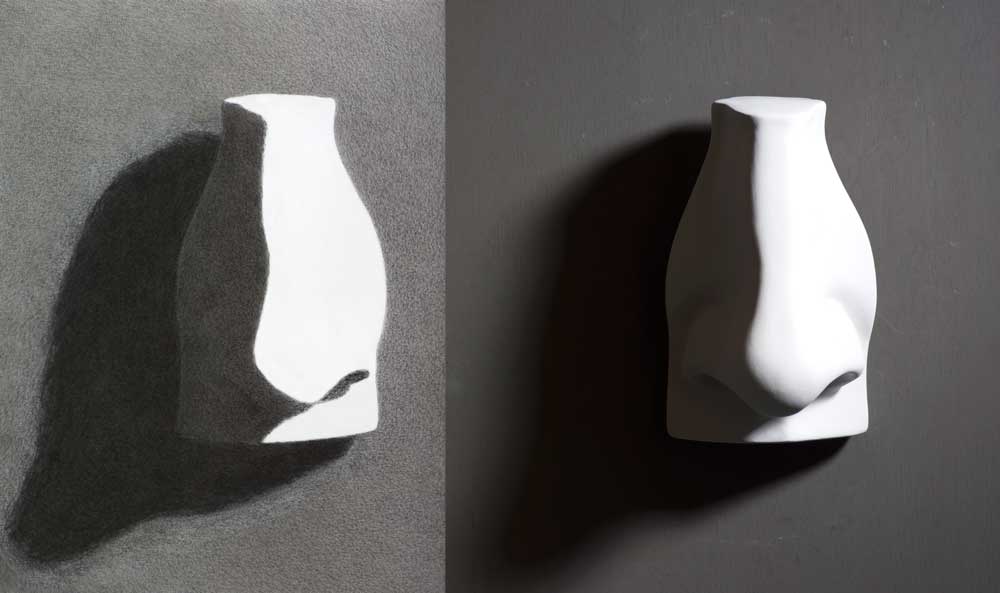 The massed-in values keyed down and smoothed. 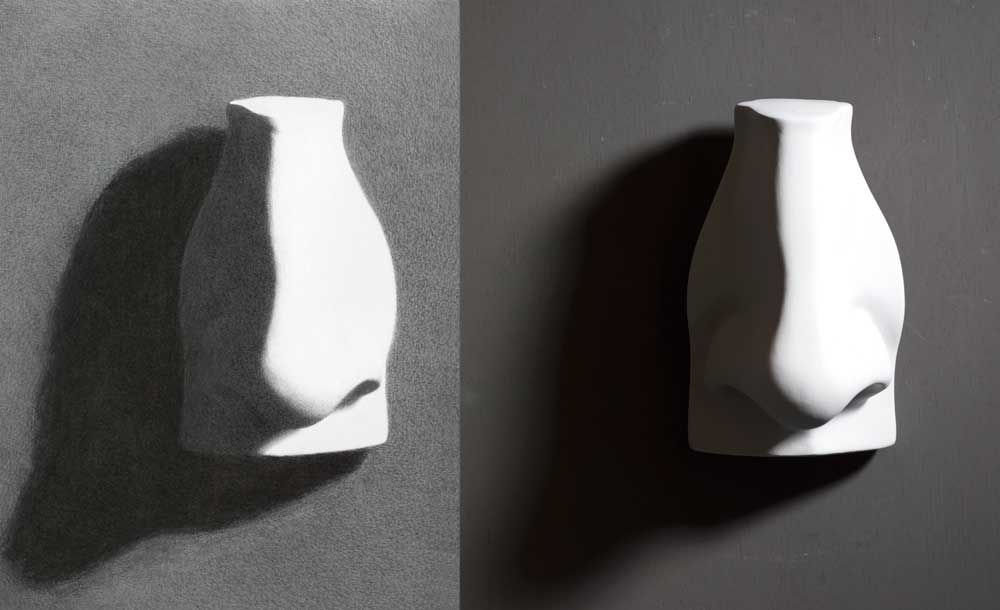 Stage 4: Turning the Bedbug Line’s Edge
Turning an edge is a way of describing the process of softening and sharpening an edge. Being the most important edge on the cast, turning the bedbug line’s edge will cause your cast drawing to begin to appear three-dimensional.

To turn an edge you must first see it properly. You do this by finding the sharpest sharp and the softest soft edges in the entire scene. Each part of the bedbug line will then be turned in relation to those extremes. 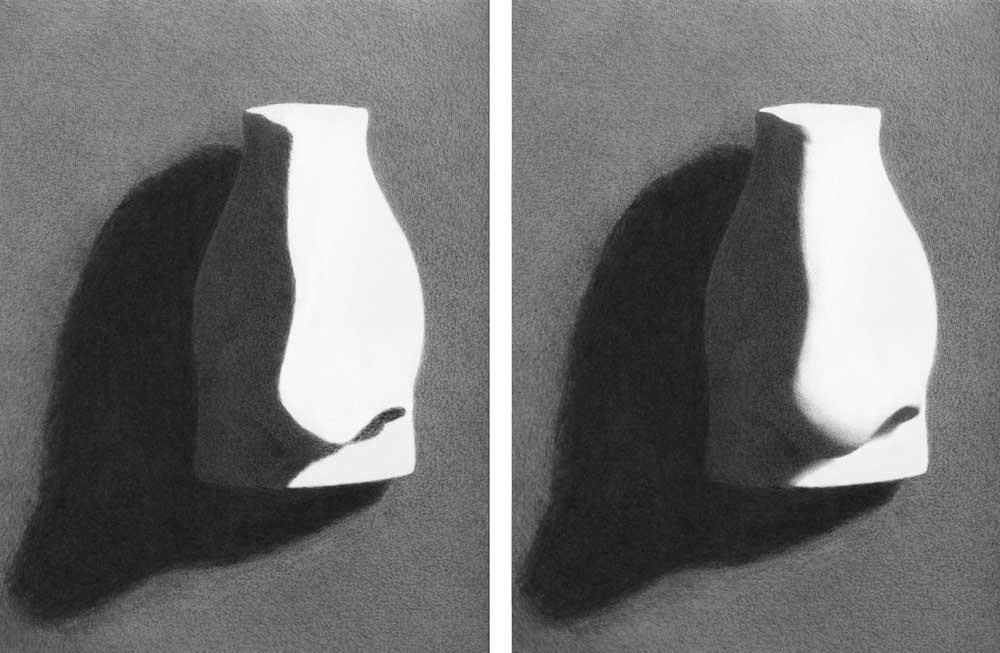 Stage 5: Representing Value Relationships
As with the perception of edges, value perception is best done relative to extremes. In a squint, you would first determine the darkest dark (which is likely the cast shadow), and then the lightest light (which are likely the highlights). You would then render, from dark to light, the relative values of the halftones that you see in relation to those extremes.

Following this sequence will assure that you do not overmodel, which is making the halftones too dark. Remember, there is a world of shade and a world of light. Halftones exist within the world of light. 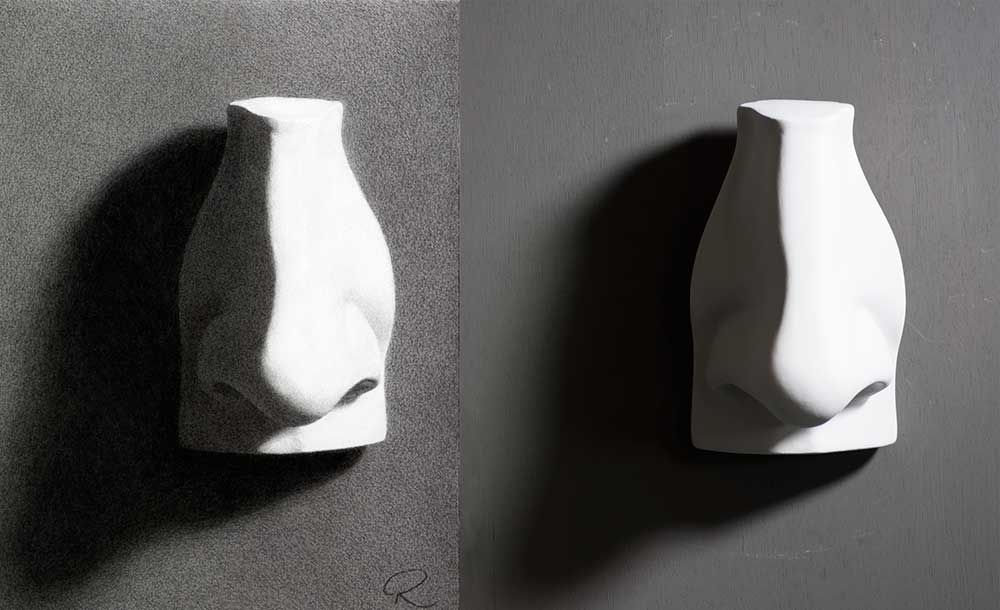 Stage 6: Representing Edge Relationships
As a final step, the edges of the contour, cast shadow, and the remaining, non-bedbug line edges would be turned in a way that relates them to the aforementioned sharpest sharp and softest soft. The combination of step 5 with this step will assure that you both see the whole and draw the whole. 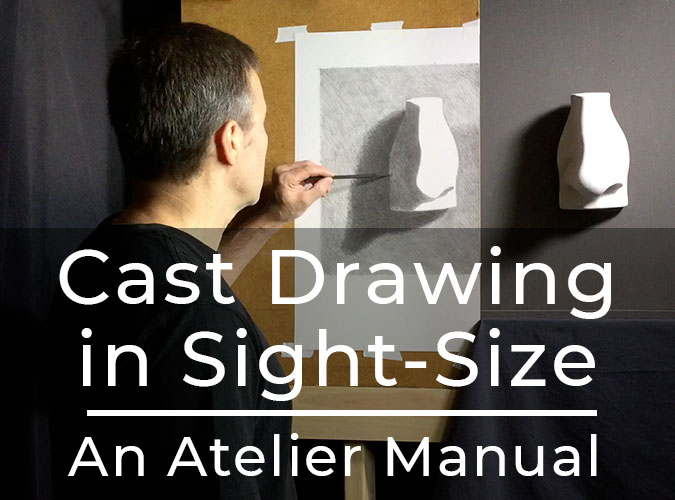 *Thanks to Tom Dunlay and Carl Samson for their input. They nicely supplemented what I had learned of Gammell’s teaching from Richard Lack and Charles Cecil.