Not Just For Portraiture 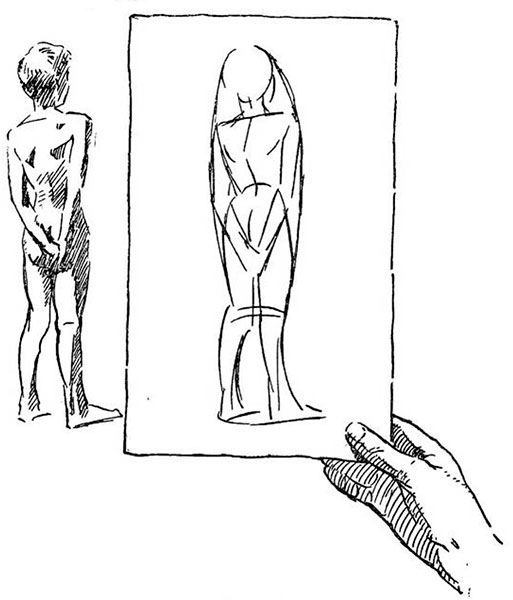 In order to secure proportion students should work at a distance of some yards from the model. Then the natural tendency to draw sight size can be utilized. By holding up the drawing alongside the model the proportion may be checked very effectually. Students should never be admonished to “draw large,” “to fairly fill the paper,” because violence is thus done to the natural scale of the drawing, the eye and hand travelling, as it were, at the same rate.

Seaby’s intention, as shown in his diagram reproduced at the top of this article, was for the student to hold their paper up to the model rather than to have it setup in Sight-Size all the time. However, earlier in the book he says the following:

“As far as possible drawings should be made sight size, that is the size of a tracing on a pane of glass held before the model. Faults in proportion often occur in drawings commenced somewhat larger than sight size, for as the student works, he forgets the scale with which he started, with the result that the proportions of his extremities and details tend towards sight size, that is too small for the general proportions of the drawing.”
-Allen W. Seaby, Drawing for Art Students and Illustrators, pages 18 and 21 (1921)

There he restates something about which Leonardo da Vinci wrote four hundred years before:

“Take a glass as large as your paper, fasten it well between your eye and the object you mean to draw, and fixing your head in a frame (in such a manner as not to be able to move it) at the distance of two feet from the glass; shut one eye, and draw with a pencil accurately upon the glass all that you see through it. After that, trace upon paper what you have drawn on the glass, which tracing you may paint at pleasure, observing the aerial perspective.”
-Leonardo da Vinci, A Treatise on Painting, chapter CXXVI (1540)

Others have also taken Leonardo’s prescription and adjusted it to Sight-Size figure drawing. Walter Sickert (1860-1942), painter, printmaker, and influential art critic in late eighteenth and early nineteenth-century Britain, was one:

“In drawing a whole figure from nature we should be three times its length from it, to oversee it properly.  (Leighton told me that – a more than sufficient authority.)  If we draw normally, we must draw on the scale on which we should trace, if our sheet of paper were a sheet of glass held up, and if, instead of pencil, we traced with a diamond on this interposed pane. You will find that a five-foot figure then comes about seven inches high on your glass, or its substitute, your paper.  On this scale the comparison is direct and not proportional.”
Walter Sickert, The Study of Drawing, from The New Age Magazine, June 16, 1910

“As suggested above, the figure should be drawn about sight-size, and the whole figure always, not merely those portions which seem the most interesting, or which chance to occupy the paper.”
-Allen W. Seaby, Drawing for Art Students and Illustrators, page 74 (1921)

Between Leonardo’s literal tracing, and both Sickert and Seaby’s directions for Sight-Size figures we have Albrecht Dürer’s grids.

Albrecht Dürer (1471-1528) was a German Renaissance artist and author. He was as much of a Renaissance Man as was Leonardo, if slightly less influential. He devised a number of perspective grids, which, when used from the proper viewing position, allowed the artist to draw figures in a visually exact, one-to-one size.

Many of today’s ateliers and academies teach their students figure drawing and painting through Sight-Size. No tracings or grids are used, just accurate eyes and the pursuit thereof.

*Allen W. Seaby (1867-1953) was a Professor of Art at Reading University, wildlife artist, print maker and author. He studied at the Reading School of art under Frank Morley Fletcher (a student of Hubert Vos and Fernand Cormon).