This is the first article in a series about piecemeal seeing. The second is here. And for yet another take on the subject, read this article here. 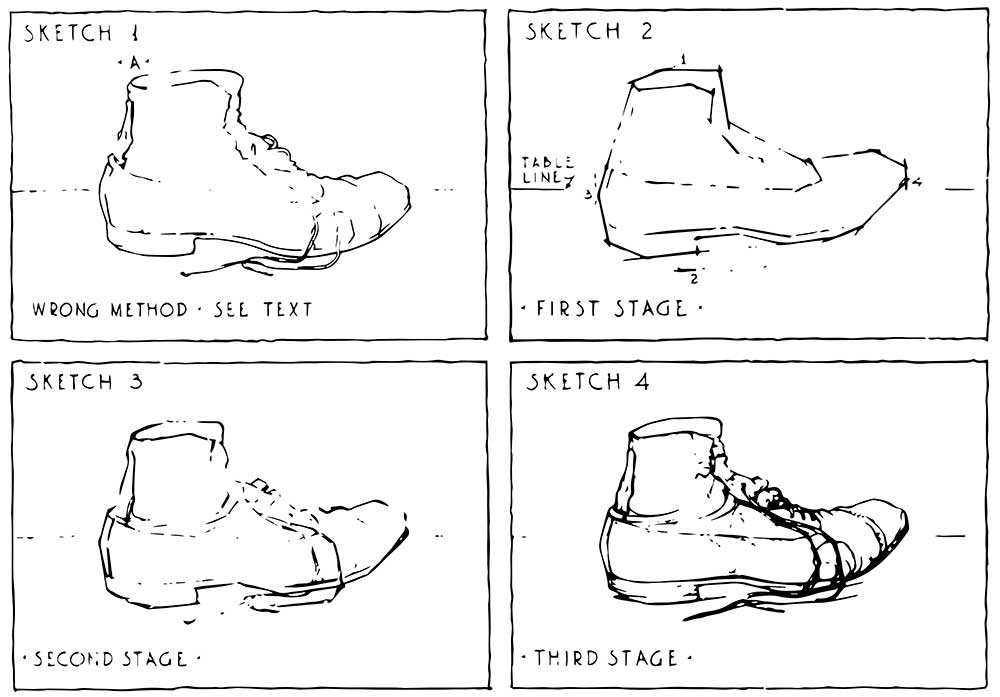 Explaining the issues with piecemeal seeing to a student is sometimes difficult because our eyes naturally look at specifics – the can’t see the forest for the trees mentality. Unfortunately, when we see piecemeal we oftentimes forget that the visual aspect of the parts is always affected by the whole.

With that in mind, I begin this series of articles about piecemeal seeing with Arthur Guptill’s thoughts on the subject. Guptill was a popular early twentieth-century architectural designer, teacher and author. He, along with his partner Ernest Watson, co-founded the magazine American Artist in 1940.

Google defines the word piecemeal as being characterized by unsystematic partial measures taken over a period of time. Despite Google’s definition, systems for drawing and painting are often based upon piecemeal seeing because they promote doing one thing at a time, often from start to finish. Many artists have painted in this way, some more successfully than others. As I mentioned in the introduction above, seeing in a piecemeal fashion is our natural tendency.

Natural or not, is it a good thing?

To find out, we must first fully understand what it is.

One image that I have found helpful in explaining piecemeal seeing is reproduced at the top of this article. It comes from Arthur Guptill’s first book, Sketching and Rendering in Pencil (1922). The rest of this article contains Guptill’s explanations, edited and abridged to make them more clear, along with my commentary.

Take a look at the first image below, what Guptill labels as Sketch 1. 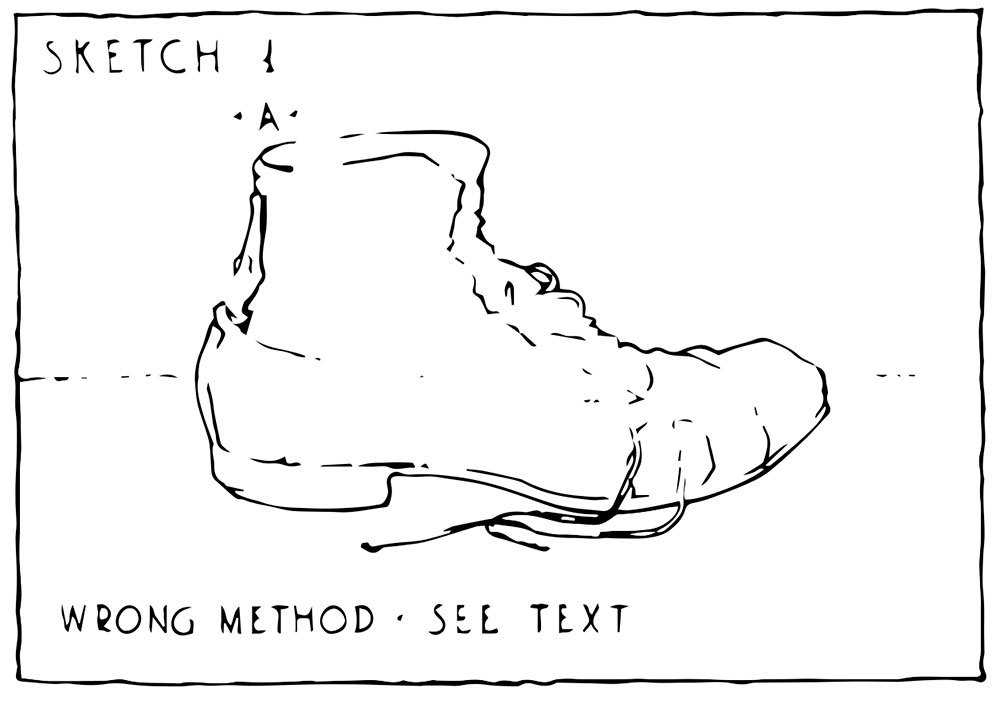 This sketch is an example of what Guptill calls an incorrect approach to drawing. While it would have been nice to see the actual shoe to compare with the drawing, here’s how he describes the process:

It is here that the student will often make the mistake of starting to draw from one point (such as “A” in the image above) at the top of the shoe, and then work down one side. Next, he goes across the bottom, then up the other side and finally back to the starting point. In the processes he completes the entire outline as he proceeds.

Should an expert artist choose to do so he might employ this method successfully, but it is not to be recommended to the beginner as it is a very difficult way in which to work. However careful one may be in drawing each small portion as he goes along, the larger forms are almost sure to be wrong, which in turn means that the smaller proportions are wrong too, in relation to one another.

At first glance Sketch 1 (left-hand image, above) perhaps seems as correct and as interesting as does Sketch 4 (right-hand image, above), but its chief fault lies in its proportions, for Sketch 4 gives the correct shape of the shoe as viewed from the one position from which it was drawn. If we start at “A” and compare the contour of the shoe in Sketch 1 with that in Sketch 4, bit by bit, we find them much the same. That is the danger of the system, it leads us astray almost without our knowing it.

For when we get to drawing the sole and glance across at the heel we find the sole is too low, the sole and heel coming to a horizontal line, whereas at 4, the sole is higher. Compare the height of the toe in the two sketches with the table line at the back and note that this height in 1 is too low. Then as we go on up to the top we find the ankle much larger in Sketch 1 than in Sketch 4.

Now in drawing a shoe such inaccuracies are not wholly disastrous but if the same method were applied to drawing the portrait of a person and as many mistakes crept in, a correct likeness would surely fail to materialize.

The ‘correct way’ to draw, according to Guptill, Gammell and my teachers, is as follows.

Guptill begins explaining the process by impressing upon us the importance of maintaining a consistent setup and viewing position. He does not necessarily explain Sight-Size directly but much of his approach fits quite well.

Once the arrangement is decided upon, the student should study the object for a few minutes before starting to draw. One should notice the general shape of the mass, forgetting the detail but considering the simple form.

The next steps are to determine the placement and size of the image on the paper. I’ll not elaborate on these as Sight-Size tends to establish that for you. 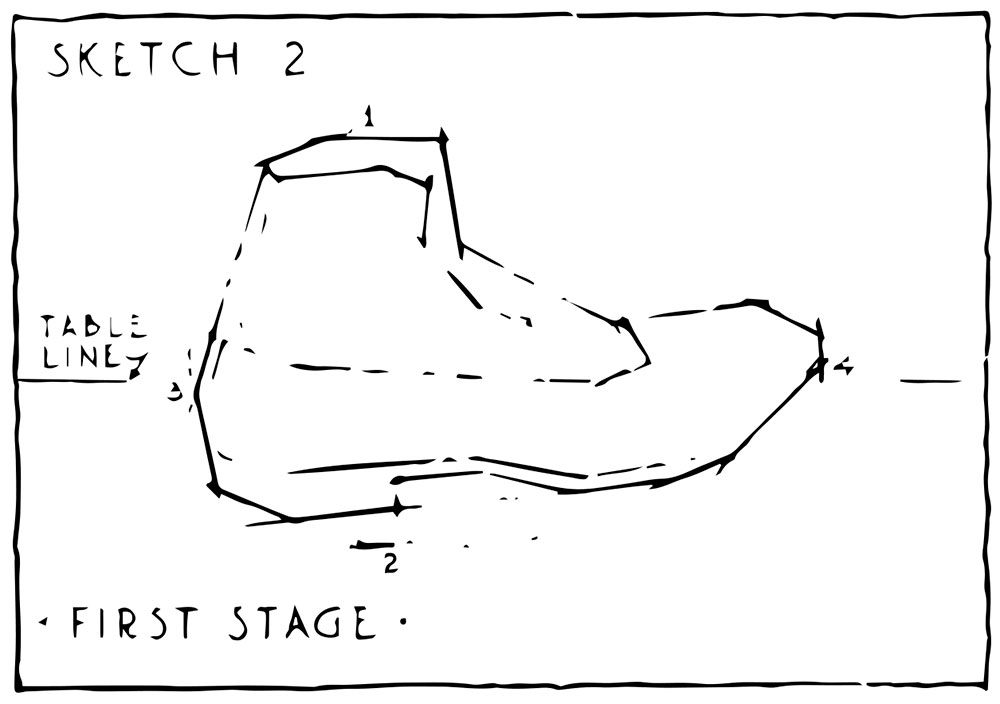 Next, block-out the larger proportions, very lightly with a few sweeps of the pencil. Compare. Is the height right in relation to the width?

But, it is not enough to compare the height of the object with the width, or the relative lengths of different lines. The slant of the lines should be studied also, to make sure that they are pitched correctly. Hold the pencil at arm’s length in such a position that it hides, or coincides with, some important line in the object, then do the same with the same line on your drawing.

Guptill is describing the block-in approach to drawing, which you can clearly see in his drawing above.

As soon as the main proportions have been properly established and the larger subdivisions blocked-in and corrected in turn, we have completed the first stage of our work. . . At this time the larger characteristics or peculiarities of the subject should be clearly expressed.

As you might imagine, it is in this initial stage where the differences between piecemeal seeing on blocking-in are most clearly seen. Realized or not, the goal when drawing piecemeal is finish as you go. The block-in approach, which is an aspect of the big-look has a wholly different goal. That goal is to establish correct relationships throughout the drawing or painting.

It is only after the general relationships of the larger aspects of the scene are correctly drawn that the smaller aspects are able to be correctly observed. See large to small. See the forest first, then the trees. 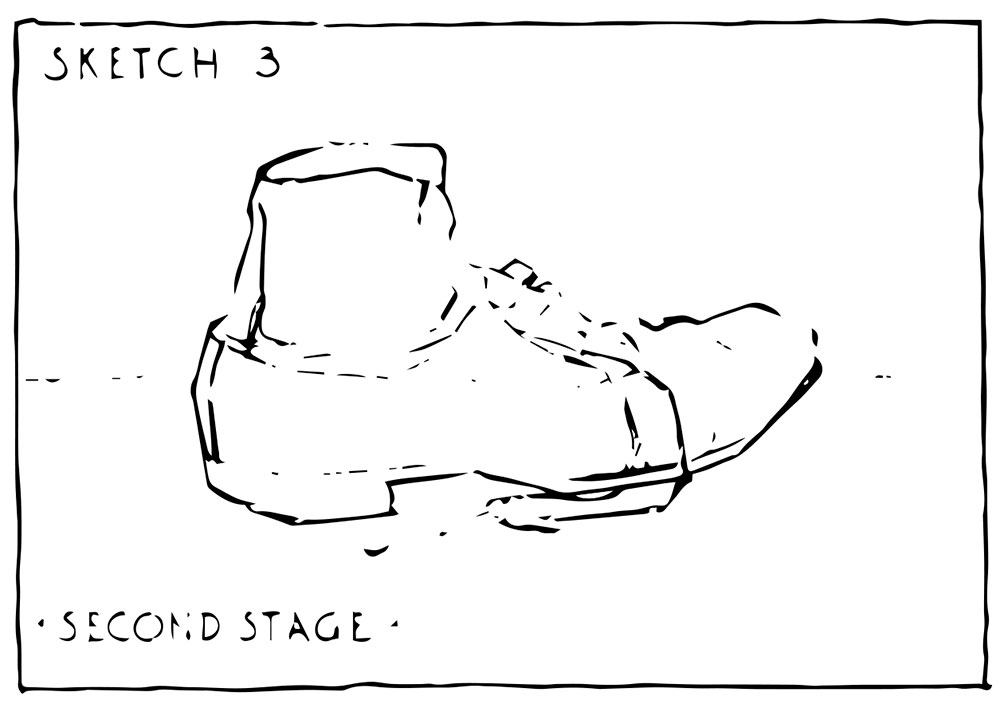 In Sketch 3, above, one can see that the larger parts are still further subdivided and more of the small details are added. This second stage expresses the smaller or minor characteristics, retaining at the same time most of the larger.

Next, the drawing should be lightly erased (usually with an kneaded eraser). I was taught to call this process ghosting out.

You see, up until now all you have drawn are constructing lines. These lines, or scaffolding, are simply meant as guides. Erasing them to the point where they are barely visible allows you to use them as such. Furthermore, they do not bind you to their placement and character. The closer the whole appears to reality, the more readily one sees the errors. As you create the final drawing, described below, these ghosted lines simply point you in the right direction.

The final stage is partly where the ‘art’ comes in. 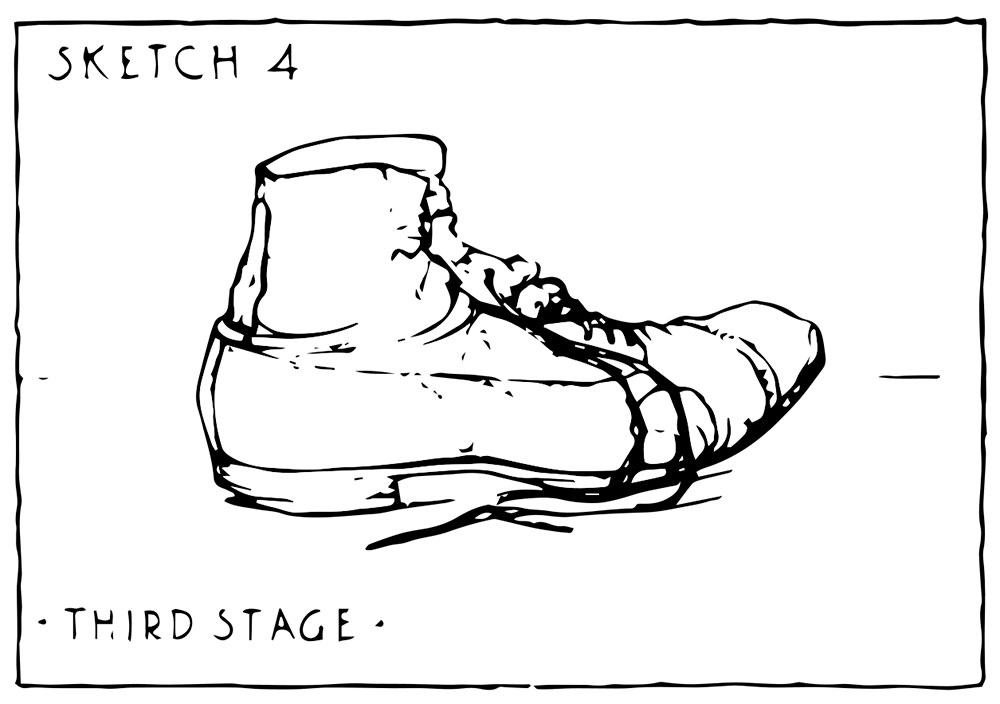 A great deal of thought should be given to this last work for the final line should not be a perfect and mechanical one but should be expressive of the shapes and textures represented.

No rules can be given for obtaining satisfactory results; it is a matter of taste and feeling. But draw thoughtfully and observe before you draw. This third stage expresses many of the smaller peculiarities of the subject, being a subdivision of the lines of the second stage, carefully refined, preserving, however, the big characteristics of the first stage.

Some final thoughts from Mr. Guptill:
A drawing is simply an explanation. The best drawings which we have are those which tell their story directly and simply and which do not confuse us with multitudinous and irrelevant details.

[A good drawing] is far more truthful than a photograph. This may sound a bit strange as the student is often under the impression that the drawing which comes the closest to a photographic representation is the best and the most true. But this is not so. The tiny details of nature are without number and if we study any object minutely we are almost overwhelmed with the small parts which close inspection reveals. A clear photograph shows many of these things. When we glance at an object in the usual way, however, we are not aware of each tiny detail for it is only when we focus our attention upon one portion after another that we see the smallest of the visible parts at all, the usual impression that we get is the one which we should attempt to transfer to our paper; not a photographic likeness which seeks and records every fact.

As the student gradually develops his perceptions he will be able to choose that which is essential according to the purpose for which the drawing is made from that which is superfluous, so that when we look at his drawings we will be conscious with little mental effort of the subject drawn and its principal attributes. It is undoubtedly largely this ease in understanding a good drawing which causes us to enjoy it in preference to a photograph of the same subject.