Article by Darren Rousar. Most recently updated in September of 2020.

During the late nineteenth and early twentieth centuries numerous artists and instructors wrote instructional manuals attempting to show the general populace how to draw. Many of those authors incorporated aspects of Sight-Size into their teaching. Edwin George Lutz, author of Practical Drawing, was one such popular arts teacher.

E.G. Lutz graduated from the Pennsylvania Museum and School of Industrial Art in 1892. His early career in the arts was as an illustrator and cartoonist, but he eventually made a name for himself as an author. One his most popular titles, even today, is Drawing Made Easy. In 1920 he published Animated Cartoons; How They Are Made, Their Origin and Development, a book which had an enormous influence on the young Walt Disney.

Here, Lutz is showing the various ways of beginning a cast drawing and then massing-in.

A hallmark of Lutz’s approach to drawing was simplifying forms by blocking-in, an approach he advocated in his books for children and adults alike.

Of especial value is simplification when one comes to deal with curves. Rare is the draftsman who can successfully get the curves of the human figure without doing more or less blocking out with straight lines.

In 1915 Lutz published Practical Drawing, a book, as he put it, “for the student and general reader.” The book’s focus is cast and figure drawing. He begins, as many others have, by invoking an imaginary pane of glass between the artist and their subject.

He then goes onto explain the process of drawing as follows: “Say that you are going to draw the cast of a head. Place it directly before you in a light that will keep the shadows as much as possible in large masses, and the side in light not too much broken up with spots or shadows. Now place yourself distant from the cast a little more than three times its greatest dimension – breadth or height, whichever is greater. Never get nearer.”

In this initial explanation of cast drawing, Lutz is not specifically discussing Sight-Size. Later on, however, he recommends it: “Another good way in cast drawing, if it can be arranged, is to place the drawing alongside of the subject and view the two from a distance or from the place where you are working.” 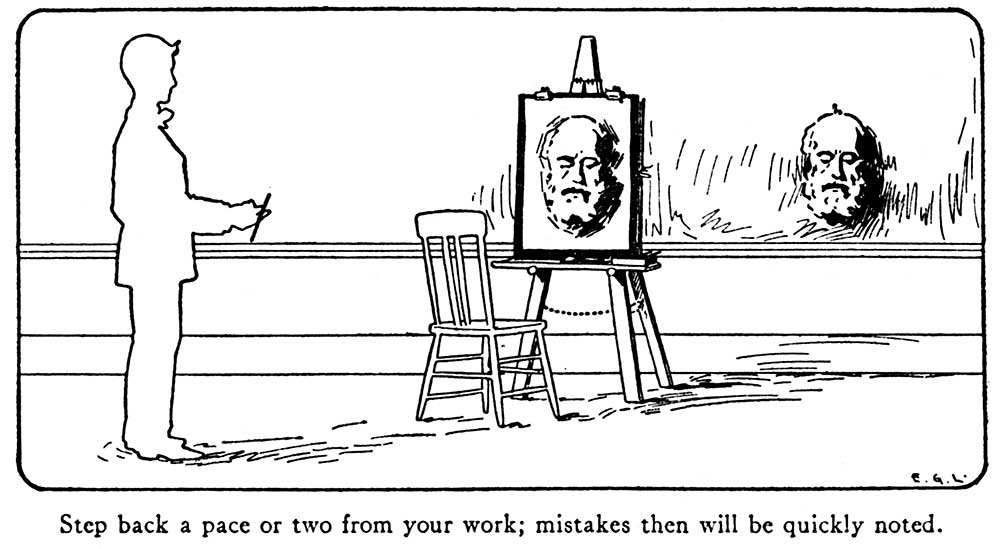 Lutz seems to have had an uneasy relationship to mechanical measuring. As related to determining the tilt of an angle, he said: “The great danger of a too frequent application of such a mechanical aid as the plumb line is that its use may become a habit. It is so easy to hold up one to see how a particular line slants that a slothful practice may be formed of not depending upon yourself. Use a plumb-line if you wish, but remember that, sooner or later, your unaided eyes must be relied upon in judging slanting lines.”

I am sure that Mr. Gammell would agree with Lutz’s conclusion, “Learn to depend on your own eyes.” However, training your eye always depends in some way on measuring. The fear of measuring, when using a plumb line or not, is a red herring. The solutions, of course, are the guess and check, and to realize that the only cure for measuring is more measuring.

Still, Lutz does have a point. Mechanics can only get you so close. And, if you’re not careful, it might not be close enough.
Note that when measuring as is shown in Lutz’s diagram you need to fully extend your arm, and keep it that way!

Like many of his contemporaries, Lutz decreed that piecemeal seeing was something to be avoided. “Think ‘big’ and your drawing will have that quality of bigness necessary for a complete work of art. The habit of working on one little part of a drawing and finishing that first, and then going on to another part is not likely to inculcate any aptitude for doing things expressing unity, agreement, and harmony – all qualities which are essentially present in any composition to which the term ‘bigness’ can be applied.”

In regards to figure drawing, Lutz prefers a constructive method, characterized by gestural stick figures followed by proportional measurements based upon head length. He does, however, offer an alternative that more closely aligns with the visual, Sight-Size approach. 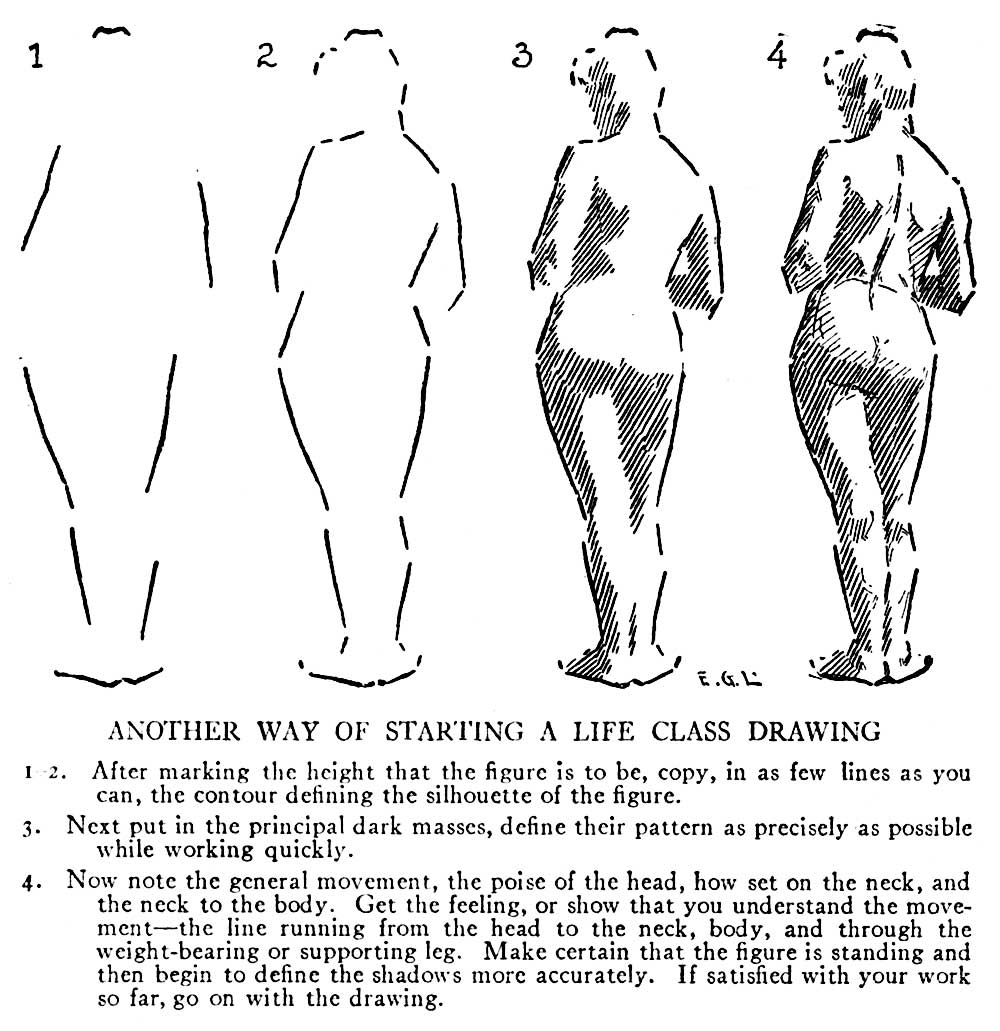 By the way, Edwin’s great-great nephew has created a site detailing everything you’ve ever wanted to know about E. G. Lutz. You can find it over here.