On the left, sightsize.com as it looked from 2007 until 2015. On the right, my first book, Cast Drawing Using the Sight-Size Approach.

On November 12, 2007 I released Cast Drawing Using the Sight-Size Approach, the first book to be focused exclusively on Sight-Size cast drawing. On the same day I inaugurated sightsize.com. Since then I have written and published five other books, produced a DVD, and republished three books that were then out-of-print. It is now ten years later.

This is the story of Velatura Press, the publishing company my wife and I founded to produce instructional materials based upon my training and the teachings of R. H. Ives Gammell. Since it’s the company’s ten year anniversary, as well as being my fifty-third birthday, I hope you’ll indulge me in a little bragging.

The Velatura Press logo. Velatura is an Italian term meaning veil, or glaze.

From the beginning I have tried to follow three core principles:

That first book, Cast Drawing Using the Sight-Size Approach, was more successful than I ever could have expected. It is now out of print, but more on that later on in the article. 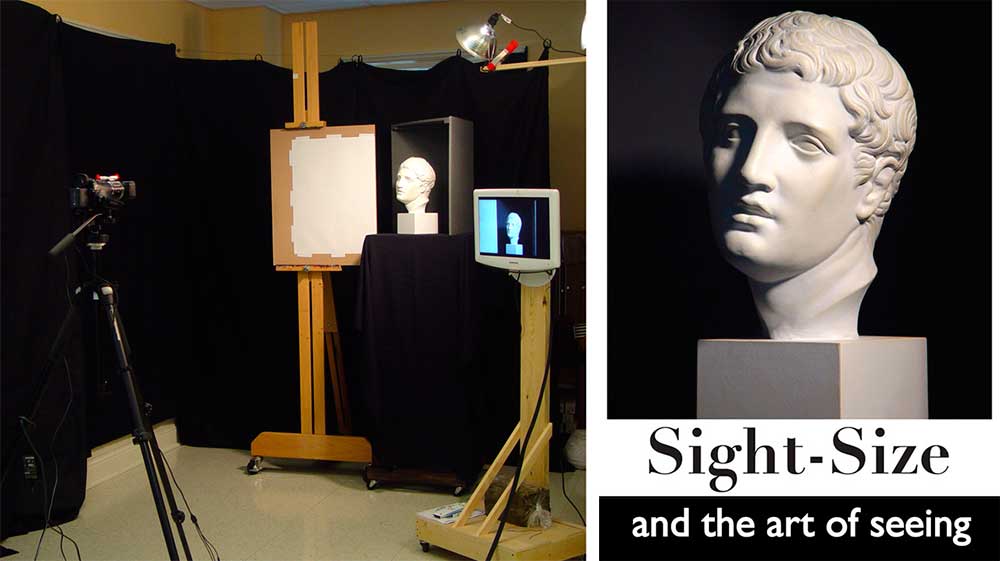 On the left, the production studio where the drawing for Cast Drawing Using the Sight-Size Approach was done and filmed for the Sight-Size and the Art of Seeing DVD.

While creating the content for the book, I realized that video would be a necessary enhancement. Therefore, I filmed the entire process of drawing the cast which features in the book. A year after the book’s release, I released Sight-Size and the Art of Seeing, the companion DVD to Cast Drawing Using the Sight-Size Approach. The DVD is no longer available. 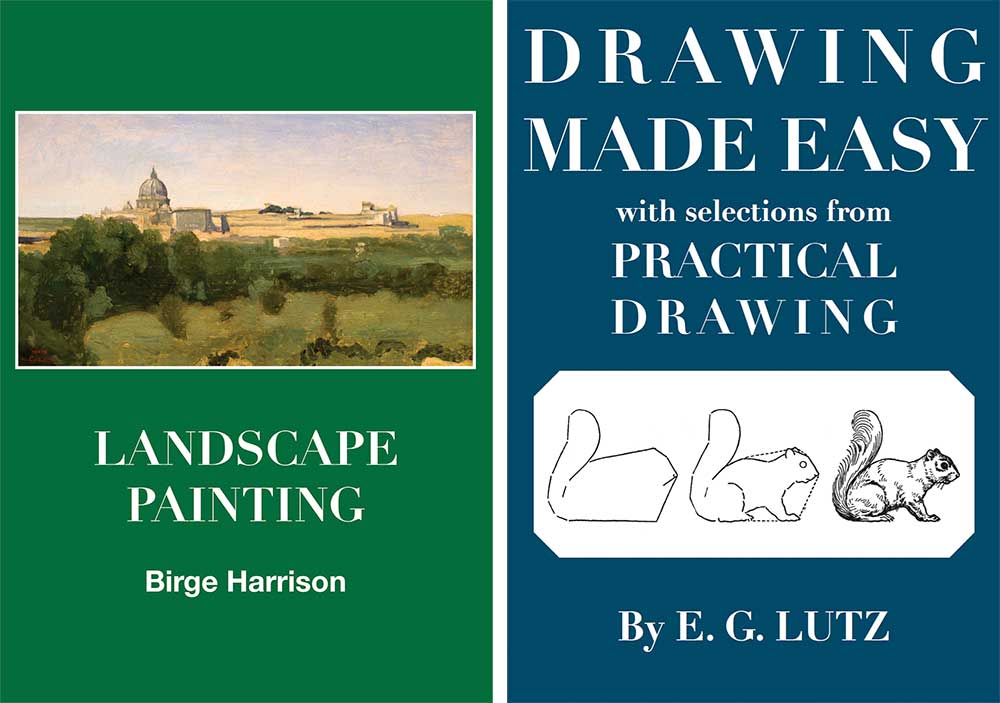 On the left, the first reprint of Birge Harrison’s Landscape Painting. On the right, the reprint of E. G. Lutz’s Drawing Made Easy.

Most ateliers that stem from Gammell’s teaching move their students from cast drawing to cast painting. Therefore, another book was needed. So a year later, in 2009, I published the follow up title to Cast Drawing, which was Cast Painting Using the Sight-Size Approach. This book is also out of print. Again, more on that later on.

The painting process was filmed in its entirety. Unfortunately, much of the media was lost before a DVD could be produced.

On the left, at work on the cast painting for the book. On the right, the cover for Cast Painting Using the Sight-Size Approach.

In 2009 I republished a second book, Edwin G. Lutz’s Drawing Made Easy. As part of that effort, I also added a bonus to the book, which were selections from Lutz’s earlier book, Practical Drawing. James Gurney, a friend who is a well-respected artist, author, and blogger, accepted my request to write the forward for that edition of Lutz’s book.

Recently, Lutz’s great-great nephew has contacted me about a biography he is doing of his great-great uncle. Hopefully that will bring all of Edwin’s books back into society’s consciousness. Most do not know that one of Lutz’s other books, Animated Cartoons, had a profound effect on the young Walt Disney.

Why republish Harrison’s and Lutz’s books, since neither directly relate to Sight-Size?

Harrison’s book was on Gammell and Lack’s recommended reading lists. While online scans were available, many wanted a physical version and those were difficult to come by. Lutz’s books, while not mentioned by Gammell, did follow the process of first simplifying the large shapes before breaking them into smaller ones. No, that is not something exclusive to Sight-Size, and yet it is oftentimes basic to it. 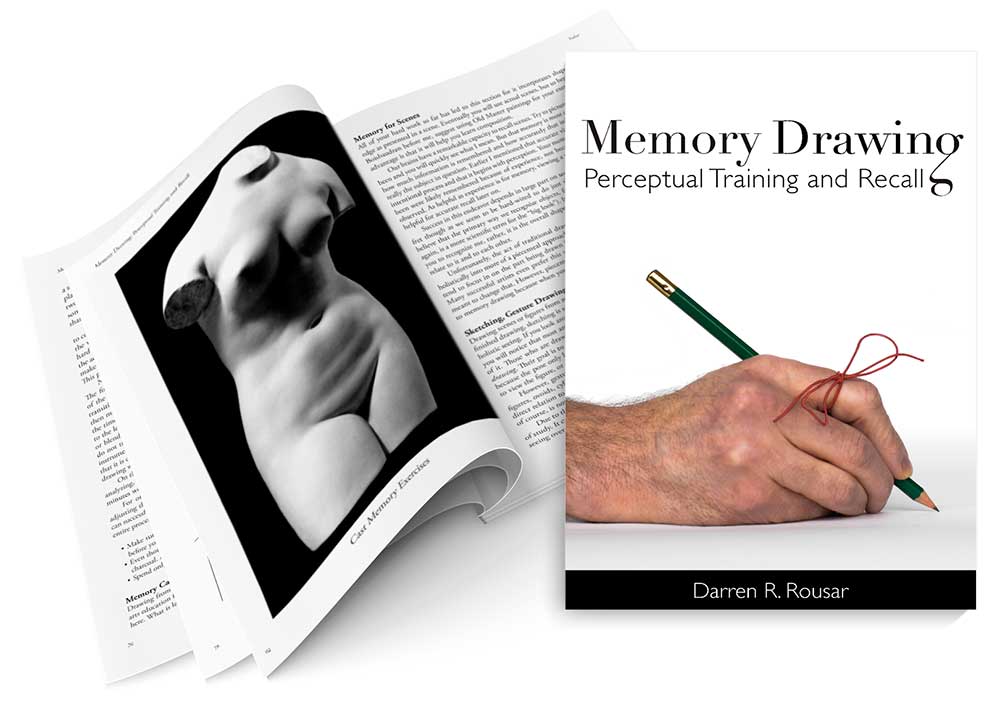 Memory drawing was a subject near and dear to both Mr. Gammell and Lack’s hearts. In 2012 I wrote a book about it, and in 2013 I published Memory Drawing: Perceptual Training and Recall. Linda Crank did me the honor of editing it.

In 2016 a team from Hiroshima City University, Japan began translating Memory Drawing into Japanese. An interesting story of that process relates to the red string on my finger as shown on the book’s cover. In America, at least, a string on a finger is used to symbolize a memory prompt – noticing the string would cause you to recall the reason for putting it there. No one actually does that, of course, because it’s simply a symbol. They do not have that symbol in Japan. Therefore, the book’s cover is somewhat of a mystery to them.

In the spring of this year the main translator, Yasutaka Sato, held an exhibition of his work on the project at the Bank of Japan in Hiroshima. The postcard advertising the show is shown below. While I have yet to make it to Japan, it seems that my hand has. 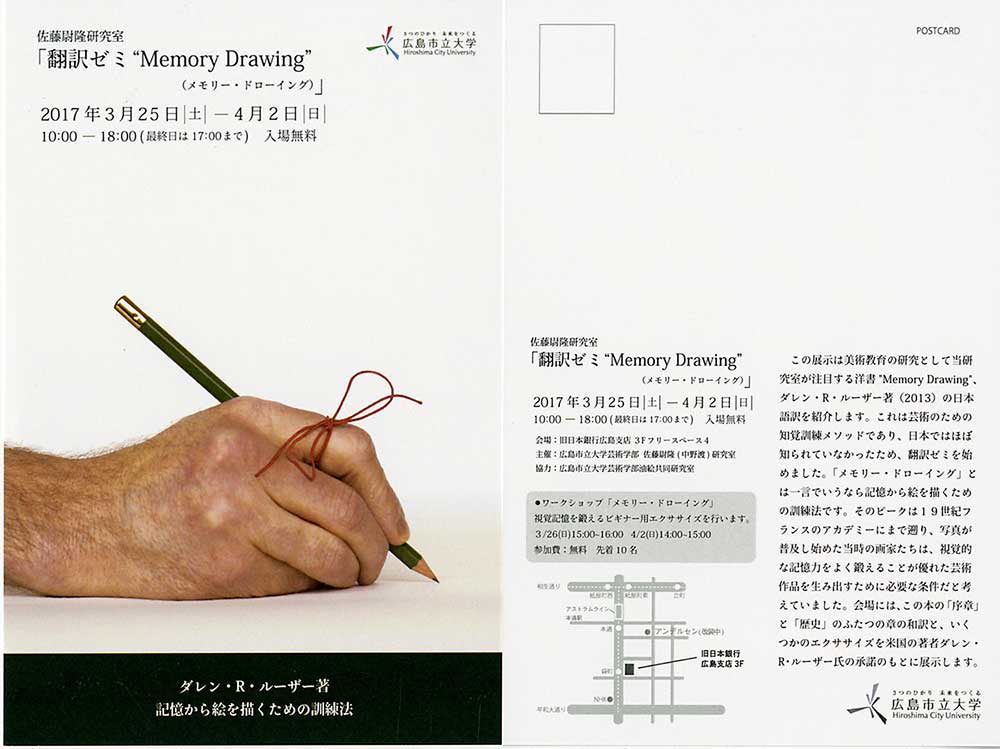 But back to the main timeline. The spring of 2013 also saw the re-re-release of Birge’s book on landscape painting. For this version I combined it into one volume with Asher B. Durand’s Letters on Landscape Painting. 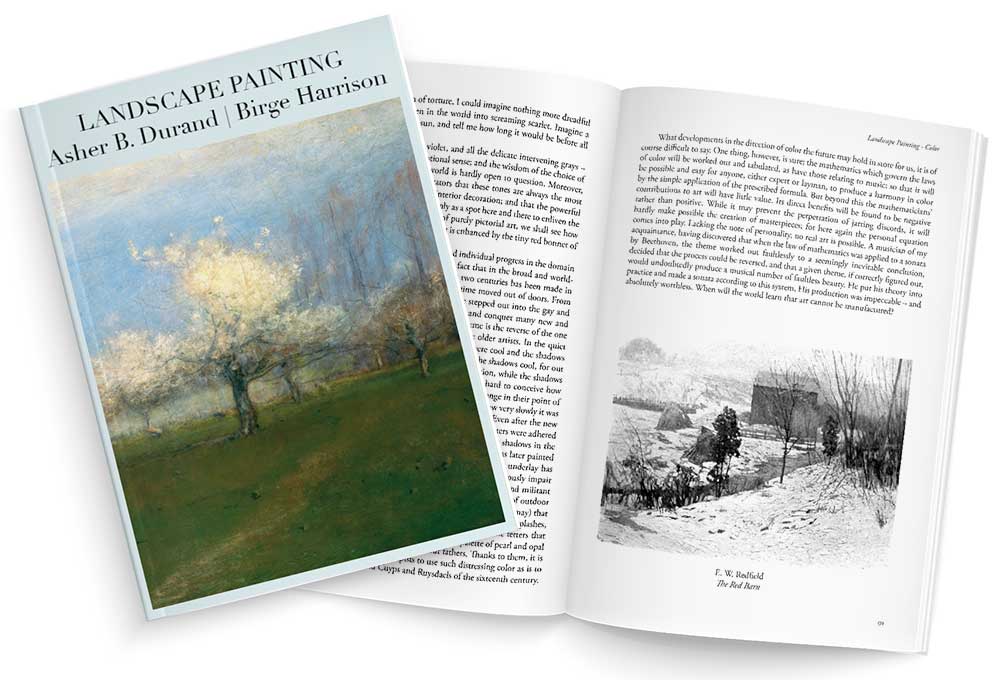 The year 2014 saw the complete English translation of Adolphe Yvon’s Méthod de Dessin. Since the Sight-Size site was only a static site at that point, I managed the translation through the now dormant Studio Rousar website. If you are unaware, Yvon was an early teacher of John Singer Sargent. If you would like a free PDF of the translation, click here. 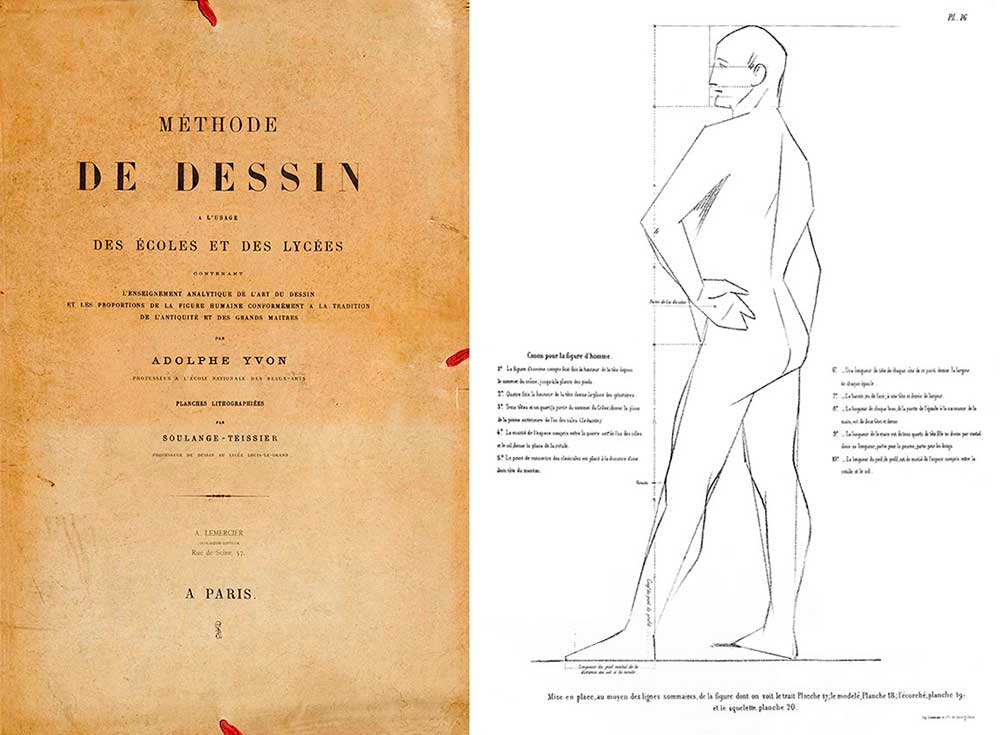 In 2015 I redesigned sightsize.com into a website with blogging capabilities, which was something that really ought to have been done from the beginning. Since then I have published a new article every other Thursday (and occasionally more often). The site features three sections: one highlighting Sight-Size artists of the past, another which contains interviews I do with present-day Sight-Size artists, and one that is a growing collection of articles about Sight-Size and learning to see.

For the last few months, The Epoch Times, Sweden edition, has been translating and republishing a number of my articles on their site.

Coinciding with the sightsize.com redesign, during the summer of 2015 I also wrote and published, in an ebook format, Steps To Seeing – The Sight-Size.com Guide To Bargue Plate Copies. This is something I give away to the community for free. To date, a little over 2500 people have downloaded that free ebook.

2016 saw the publication of two more ebooks. The first, An Accurate Eye – Learn to Draw Better by Learning to See Better, explains how accurate sight needs to be intentionally learned, and that it takes consistent effort. To that end, the book and a supplement present numerous exercises that you can follow. 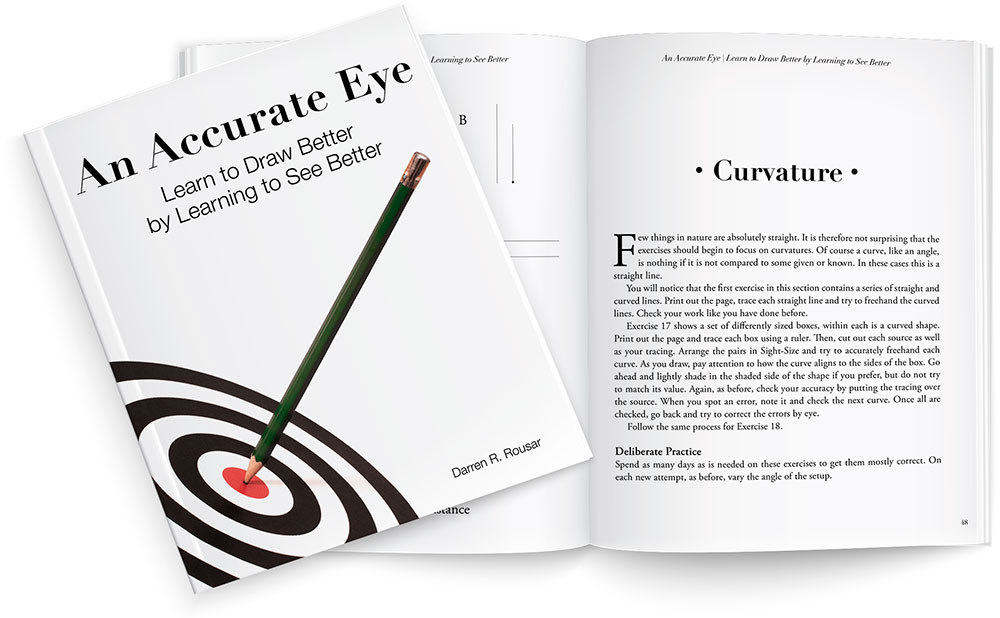 A cover/interior mockup for An Accurate Eye. Despite the mockup, I decided to limit this title to an ebook format.

I could go on and on about The Sight-Size Cast, but that’s better done on the page over here. Let me just say that if you want to learn how to see so that you can draw whatever you see, this is the book for you – even if you’re attending an atelier (and especially if you’re not).

I would be remiss if I did not mention a couple of other Sight-Size related items. Jason Arkles, a sculptor who trained at Charles Cecil Studios, published Sculpting From Life – A Studio Manual of the Sight-Size Method. He now runs his own sculpture atelier in Florence, as well as an informative and entertaining podcast, The Sculptor’s Funeral.

Nicholas Beer, a former student and teacher at Charles Cecil Studios published a great book about Sight-Size portraiture, called On Sight-Size Portraiture. Besides his teaching duties with Charles, Nick also has his own school in Salisbury, England, called Sarum Studio.

What’s next for Velatura Press and sightsize.com? A number of good things, one of which is the release of my first online course, Sight-Size Cast Drawing.*

Beyond that, my lips are sealed for now.

I normally end all sightsize.com email correspondence with the phrase see well. And so I will close this article in the same way.

* In late July of 2018 I opened Atelier Rousar | online and released the Sight-Size Cast Drawing course.