Article by Darren Rousar. Most recently updated in May of 2022. 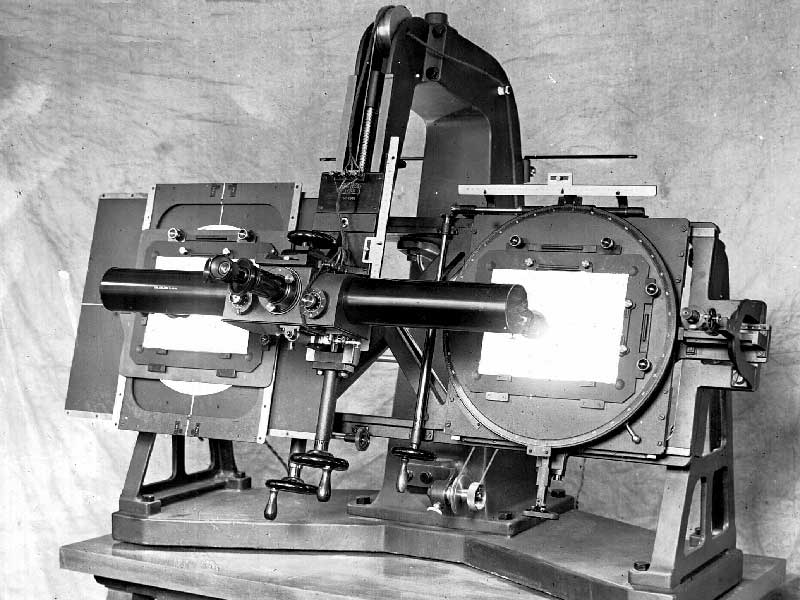 The Zeiss Blink Comparator. Note that I found this image via a Google search. Reverse image searching turned up no credible copyright source for it.
An article about the Blink Comparator is here on the Zeiss website.

When in Sight-Size, a key way to visually check your work is to quickly flick your eye between it and nature (your source)*. Any errors will appear to visually blink, or ‘jump’ out of place. This act relies on a process known by cognitive psychologists as persistence of vision or the sparkler’s trail effect.

Your mind, for a split second, retains everything your eye sees. If you switch fast enough, each time your eye rests on each of a pair of similar images you become briefly aware of the differences. These differences will appear to jump or blink. It is an effect which is not only of use to artists, it also helped discover a planet.**

In many ways, Clyde Tombaugh (1906-1997) was the twentieth-century’s Galileo. The comparisons are quite stunning. As a young man of 20 he designed and built a telescope. Two more followed, each with lenses and mirrors that Tombaugh ground himself. To record what he saw through his telescopes, he drew. As evidenced by some of those drawings, Tombaugh’s observational prowess landed him a job at the Lowell Observatory in Flagstaff, Arizona.

That job allowed him a chance to use instruments far beyond those he made using his home-brew skills. One such instrument was the Blink Comparator. 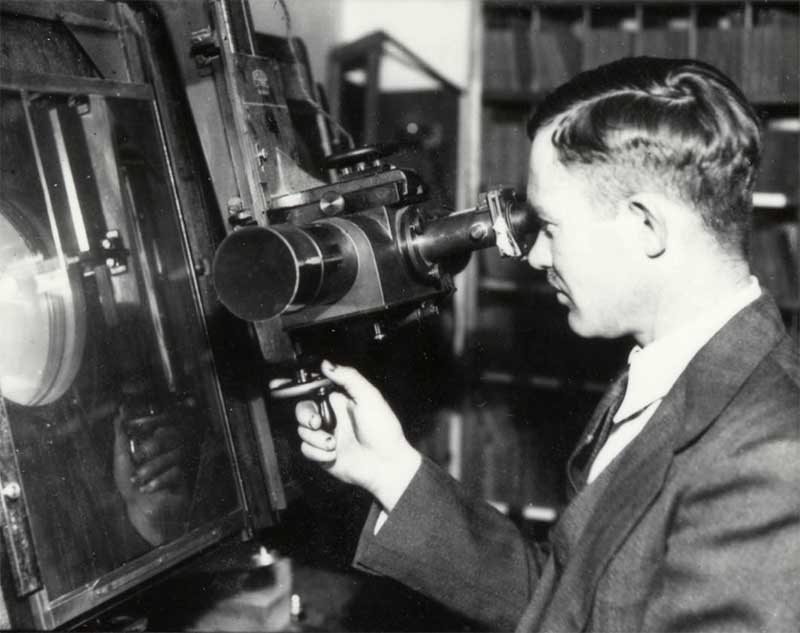 Clyde Tombaugh at the Blink Comparator (1935). Photo courtesy of the Lowell Observatory Archives.

The instrument works as follows. First, a photograph is taken with a camera of a select portion of the night sky. A few says later, at the same time of night, another photograph is taken of the exact same portion of the sky. Both photos are then mounted on the viewing plates of the Comparator, with one on each side. Above each is a microscope with their views reflected, using mirrors, into a central viewing eyepiece. You can see a good example of this in the first image at the top of this article.

Every second the machine would alternately illuminate one of the photographs.

The observer’s job is to discern the differences between the two images, to find the blinks. A difference means that something in the sky is moving. That movement could indicate an asteroid, a comet, or even a planet. If something moves in an area where movement was not previously observed, it’s a new discovery! Given that there might be hundreds, if not thousands of little white dots populating each photograph, it is a difficult job. The Blink Comparator and our brain’s persistence of vision changed all that.

This animated gif shows what Clyde Tombaugh saw through the Blink Comparator on February 18, 1930.

Of course, a Blink Comparator is not something useful for drawing, though the principle certainly is.

An ancient Greek krater (your source) and your outline drawing on the right.

Let’s say that you’re drawing the Greek krater, above, in Sight-Size and that your drawing is in outline on the right. Close one eye and quickly flick it back and forth between the krater and the outline. Initially, focus on one area , and then progress along the outline. Then, try to view the entire image at once. Can you spot the error? It’s very subtle.

If you did not notice the error in the original pair of images, you might be too close to your screen. It also takes some practice and the more finely tuned your eye is, the more quickly you’ll notice the differences.

Flicking your eye back and forth as a way of comparing your artwork to the source not only works when trying to accurately discern shape errors, is also works quite well for value and color errors.

Pluto, as discovered by Clyde Tombaugh on February 18, 1930.

What your brain perceives when you flick your eye between the vase and your drawing.

*This error-checking technique can also work when using comparative measurement. However, the size differences between the source and the artwork make it much more difficult to perceive the errors because your brain is comparing two differently sized perceptions.
**I realize that Pluto is no longer considered to be a planet. It was demoted in 2006.