The Eye Of The Painter 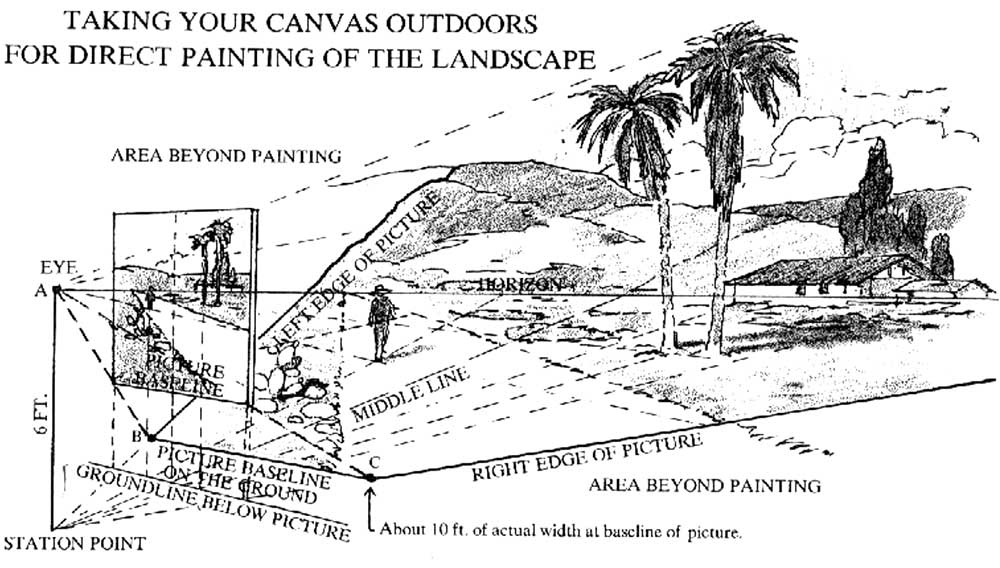 A diagram from The Eye of the Painter and the Elements of Beauty (1961), by Andrew Loomis.

Mentioned before is the fact that Sight-Size is as useful for drawing all visual subjects as it is for cast drawing and portraiture. Why? Because it is the only arrangement which provides the eye of the painter with a one-to-one comparison between the subject and artwork.

Although he was a highly sought after commercial artist during the first half of the twentieth-century, Andrew Loomis’s place in history rests on his ability teach others through the written and illustrated word.* With one notable exception, his books were directed towards budding young illustrators. But with his final book, The Eye of the Painter and the Elements of Beauty (published posthumously in 1961), Loomis was speaking to another aspect of the market. That aspect were those commercial artists who, in Loomis’s own words, “turn to fine art in their later years.”**

Despite the fact that most of Loomis’s instruction in his books is heavily dependent on learning construction, there are times, especially in The Eye of the Painter, that he recommends seeing nature directly. Often this recommendation takes the form of Sight-Size.

“The best advice I can offer is to paint what you see as you see it.”

Andrew Loomis, from the Eye of the Painter

As you can see in the diagram at the top of this article and in the one below, Loomis shows his readers how to setup a landscape in Sight-Size.

From the top diagram:
“Few artists ever stop to realize that in outdoor painting they are really painting a huge pie-shaped slice of the stretch of landscape before them. The importance of realizing this is manifold.”

“First, the baseline of the painting represents comparatively few feet, while the distance may represent miles across the picture. In the diagram above, note that the baseline of the picture represents only about ten feet. Approximate this line in front of you by sighting beyond the bottom corners of your canvas to the ground with your eye opposite the middle line of your canvas. (AB and AC). Draw foreground material between B and C. You can lay stones at the points B and C and sight in vertical lines above them to find how much distance you should include. The vertical lines are the right and left edges of your painting. These lines actually fan out to the horizon and distance. This keeps the foreground in correct relation to the distance. The horizon of the picture should be at the eye-level of the painter, and you will find it easiest to paint if you set your canvas so the two coincide.”

“Thus, by first establishing the actual area of landscape to be incorporated into your canvas you can paint all material the same size as you see it.” 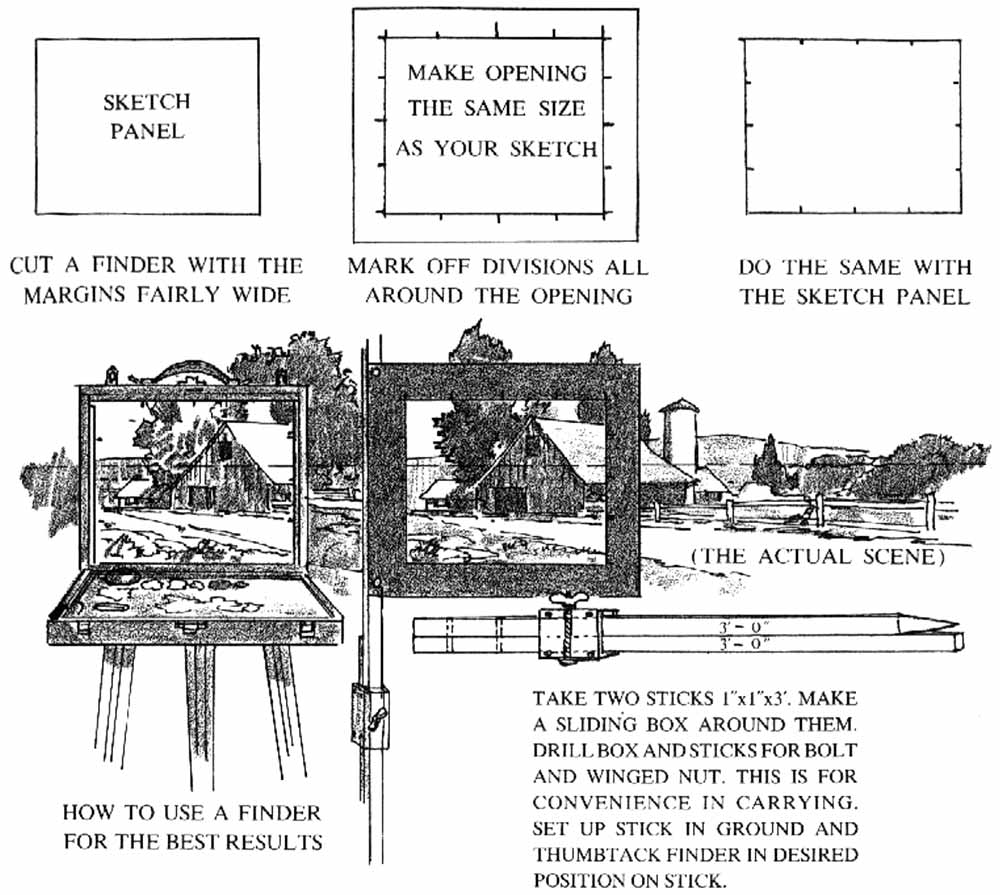 A diagram from The Eye of the Painter and the Elements of Beauty (1961), by Andrew Loomis.

From the diagram above:
“A small finder held fairly close to the eye is excellent for finding subjects. However, once a subject is decided upon, it is more helpful to have one with an opening exactly the same size as your sketch. This can be thumbtacked to a stick next to the sketchbox. Place this so the two are aligned, as shown above. In this manner you can keep viewing the real scene as you make your sketch, and you will find it easier to draw all the objects in correct scale and proportion. The image is fairly constant if you keep the head in the same position for both viewing and painting.”

“Think of your paper as representing open space, not as a two-dimensional surface, but as if its edges were the boundaries of an open window. You look at all of life and nature through this paper window.”

Loomis is also aware of the fact that we oftentimes see what we want or expect to see: “The truth is that we can quite easily train the eye to see as we want it to see; in fact it has already been trained to do this.” Again, keep in mind who his audience was – trained commercial artists.

Instead he recommends, “This is the way the eye the artist must work: He must see a tree as an individual tree, its growth, its particular formations and branches, the groups of leafy forms which make it that tree and no other.” In other words, paint what you see, not what you know.

To highlight this point he quotes Nicholai Fechin, “Paint the apple, not an apple.”

By the way, renowned landscape painter Joseph McGurl makes and sells a Sight-Size Viewfinder that mimic’s Loomis’ ideas. You can find it here.

*Andrew Loomis (1892–1959) studied at the Art Students League of New York under both George Bridgman and Frank DuMond. He finished his studies at the Art Institute of Chicago. Besides gaining fame as a commercial artist/illustrator, he was the author of six books: Fun with a Pencil (1939), Figure Drawing for All It’s Worth (1943), Creative Illustration (1947), Successful Drawing (1951), Drawing the Head and Hands (1956), and The Eye of the Painter (1961).

**To make sense of that statement we must understand that Loomis believed “the keynote of an illustrator’s job was to sell the story, just as he would any product.” Whereas a “fine” artist was one who painted “easel pictures.”