Article by Darren Rousar. Most recently updated in December of 2021. 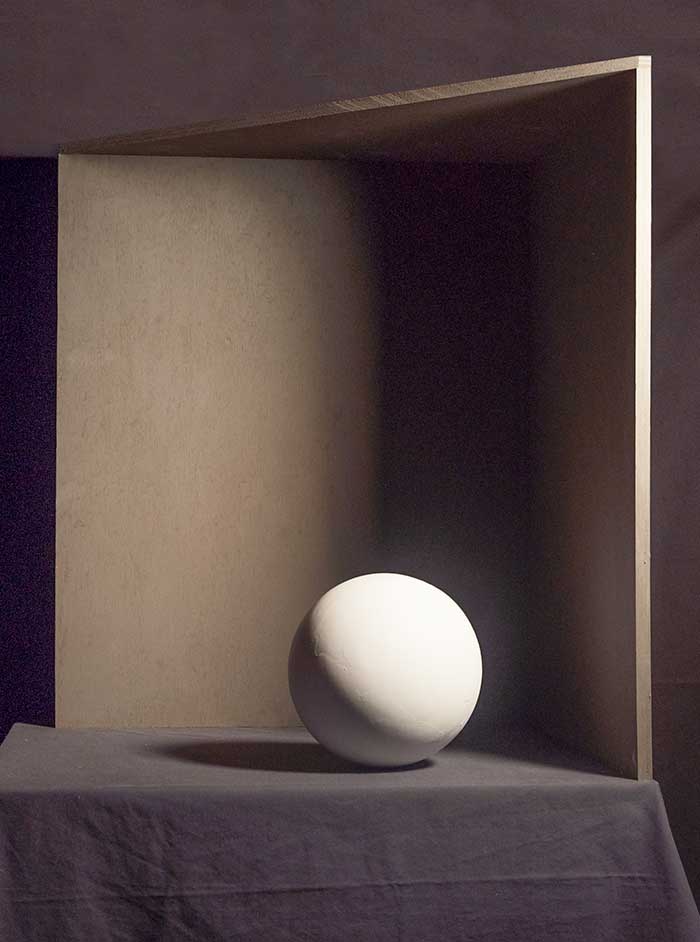 In a previous article I taught you how to make your own still life stand. During this article we are going to construct a shadow box, the purpose of which is to allow the artist to more easily control the light hitting their source objects.

Without a shadow box, your light control options are limited to how you position your light source and how you position your objects. If you are using a natural light source, the first option is not really an option at all, short of moving the still life stand around. The result, in both cases, is a lighting situation where the background of the scene is often lighter than you might want it to be. Of course, there is nothing wrong with that and you may even prefer it that way for a particular composition.

However, a darker background can help the scene’s objects appear to stand out from the background and, as a result, appear to have more depth.

With a shadow box, you can control this. You can also produce some interesting background shapes which will give you further opportunities to learn to see. 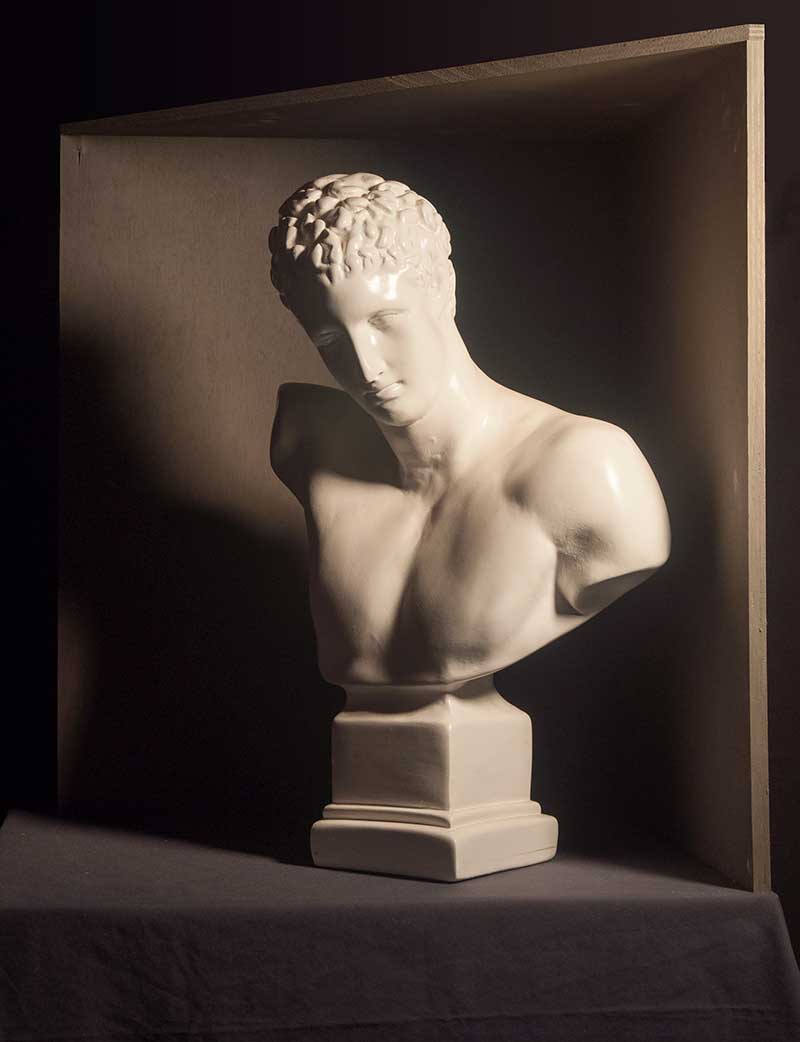 A standing cast in a shadow box.

Depending upon the design, a shadow box can be single use or multipurpose. The most simple version is, in fact, not really designed at all. It is a cardboard box. Even a draped piece of cloth could suffice. Of course, those are transitory, but they will work fine in a pinch.

I prefer something more permanent, and more useful. The design shown in this article is sturdy enough that the back side can be used to hang a cast on. 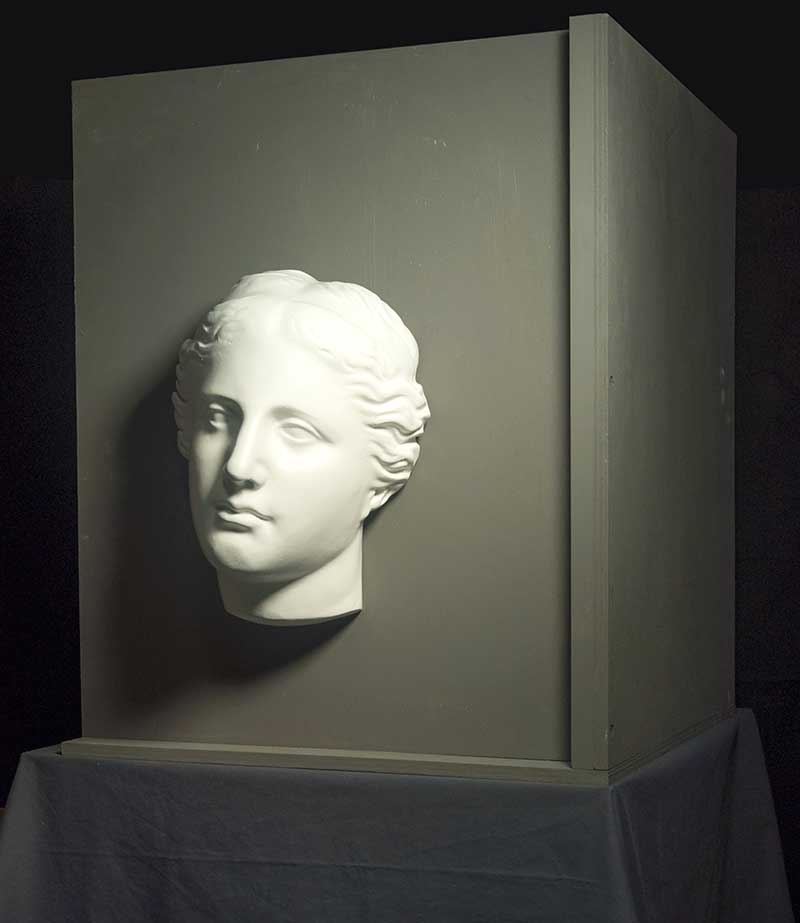 A cast, hung on a hook from the back of a shadow box.

To begin, you’ll need some plywood. I tend to use two, 2’x4’x½” sheets of plywood. Masonite might work as well, but due to its composition it cannot be easily screwed together. One sheet will be needed for the sides of the box and half of the other sheet will be used for the top. If you purchase sanded plywood, the remaining half can be used as a drawing board (although Masonite would be better for that).

The first step is to determine the size of the intended box. I usually make mine roughly the size of the top of my still life stand. In this case, my stand is 24″x24″, so I can simply cut one of the sheets in half. This cut gives me both sides of the box.

The height of the box is 24″ but you could make the box any height. If your setup or cast is larger than 24″, you’ll need to make it taller. In that case, you might need an additional sheet of plywood as you’ll not get the two larger sides out of one sheet.

One could simply screw the two sides together at the corner, forming a right-angle. However, that is not very sturdy, although attaching the top will help. Regardless, I prefer to add an additional brace. 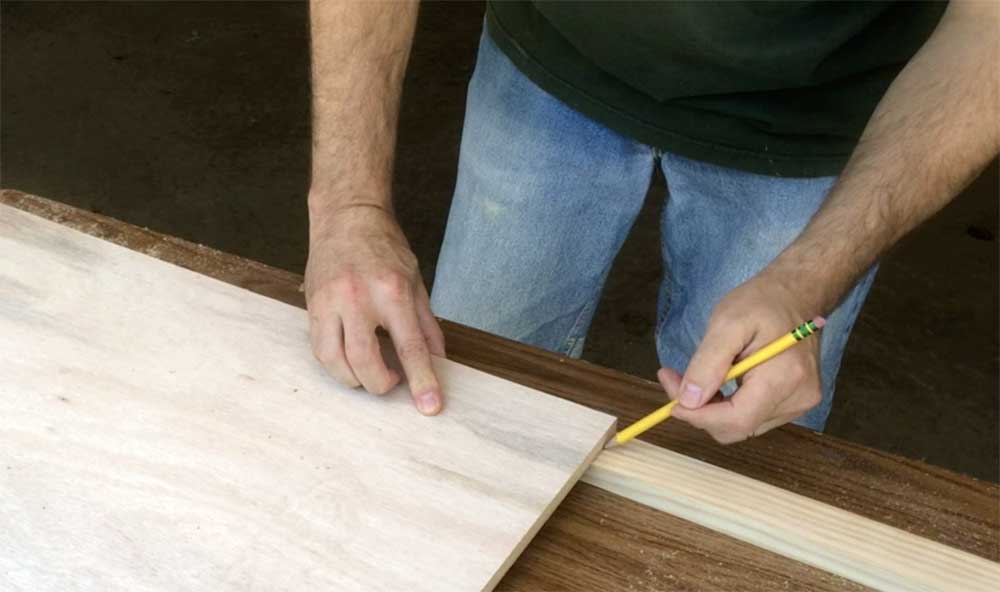 The brace can be attached to the inside of the corner or to the outside. The inside choice has a potential drawback though. If you choose the inside, and eventually want to draw or paint a subject which shows an inside corner in the background, you’ll have the brace showing. As such, I choose the outside, even though it does make construction slightly more complicated.

Regardless of your choice, the next step is to cut your brace to a length which equals the height of your box. I used 1″x2″ pine for the brace.

Use short screws to attach the brace to one of the plywood sides. To do this, I screwed it in from the back. The circled area in the image below should explain this. Also note that I am using some remaining 1″x2″ as a temporary support (lower-center in the photo). I tend to use a brad nailer first, to hold the stock in place (as shown in the photo). Only then do I use screws. 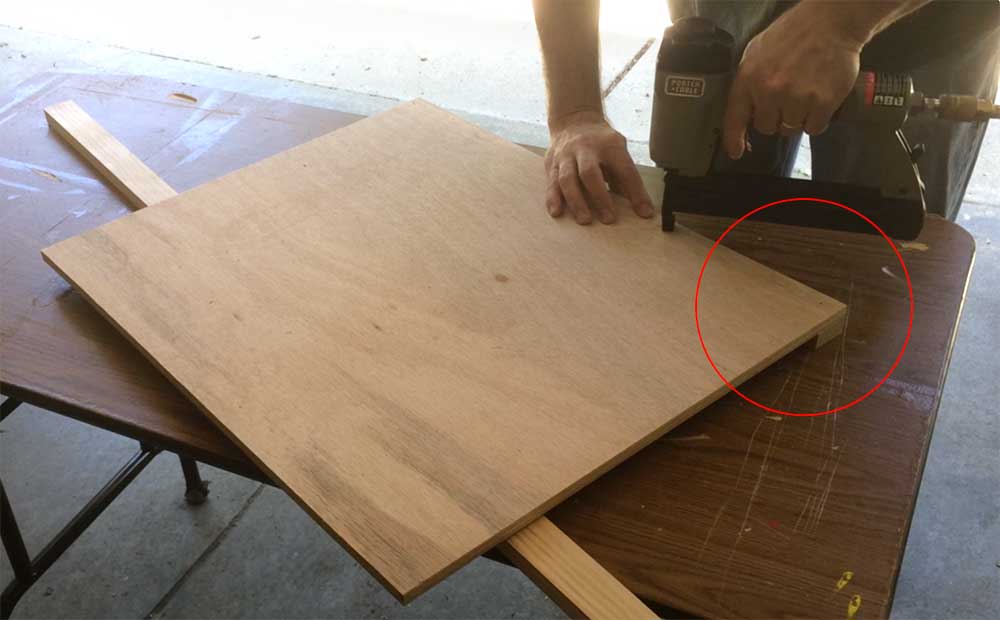 Mounting the brace to one side of the box.

Mounting the other side of the box to the previously attached brace.

Once again I am using the remaining brace stock as a temporary support. That is shown in the lower-right of the photo above and also in the one below. 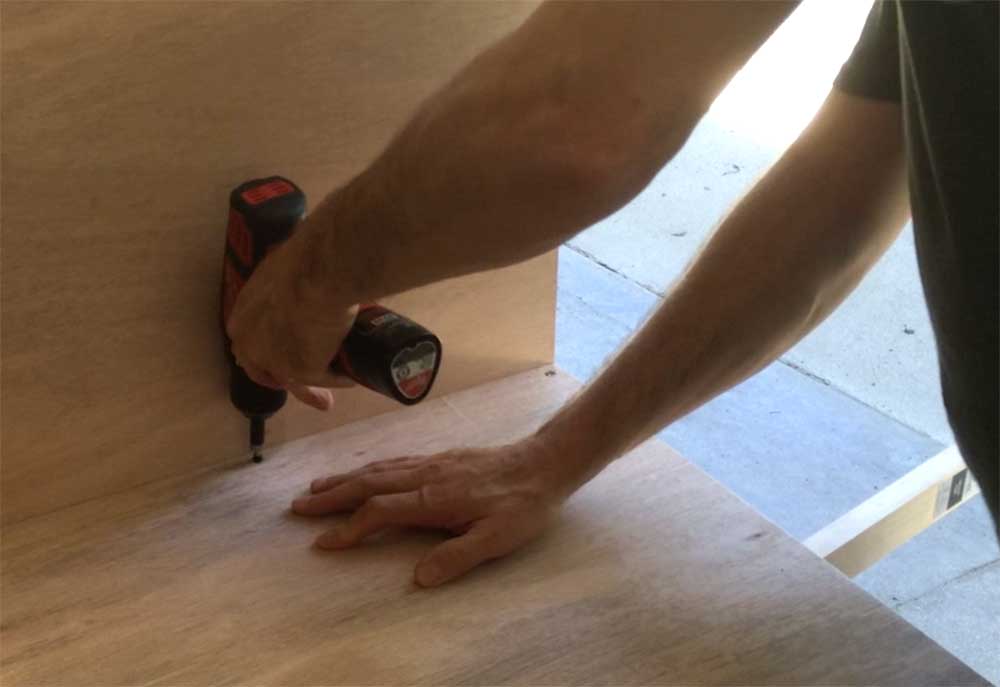 Attaching the brace to the other side of the box. 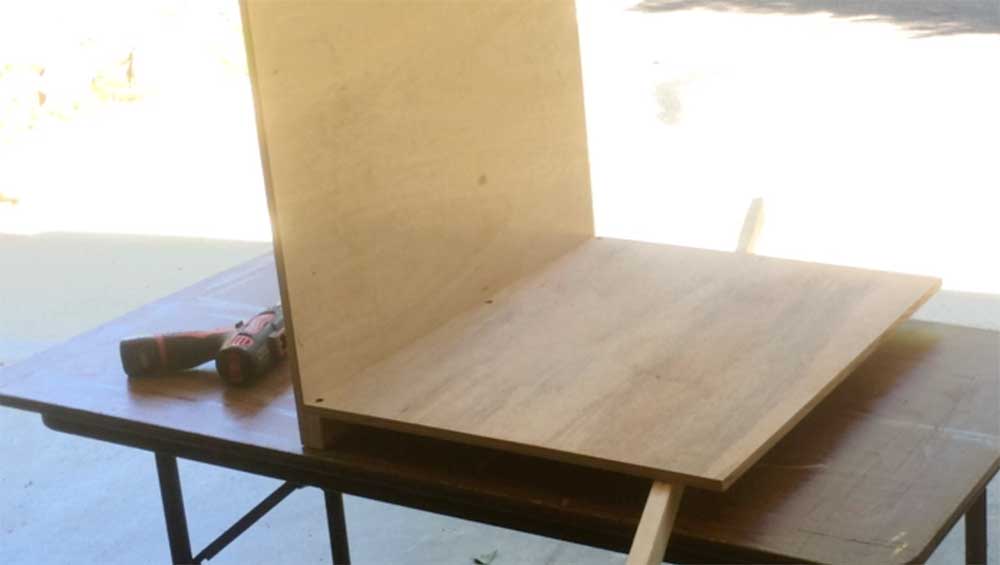 After the brace is attached. 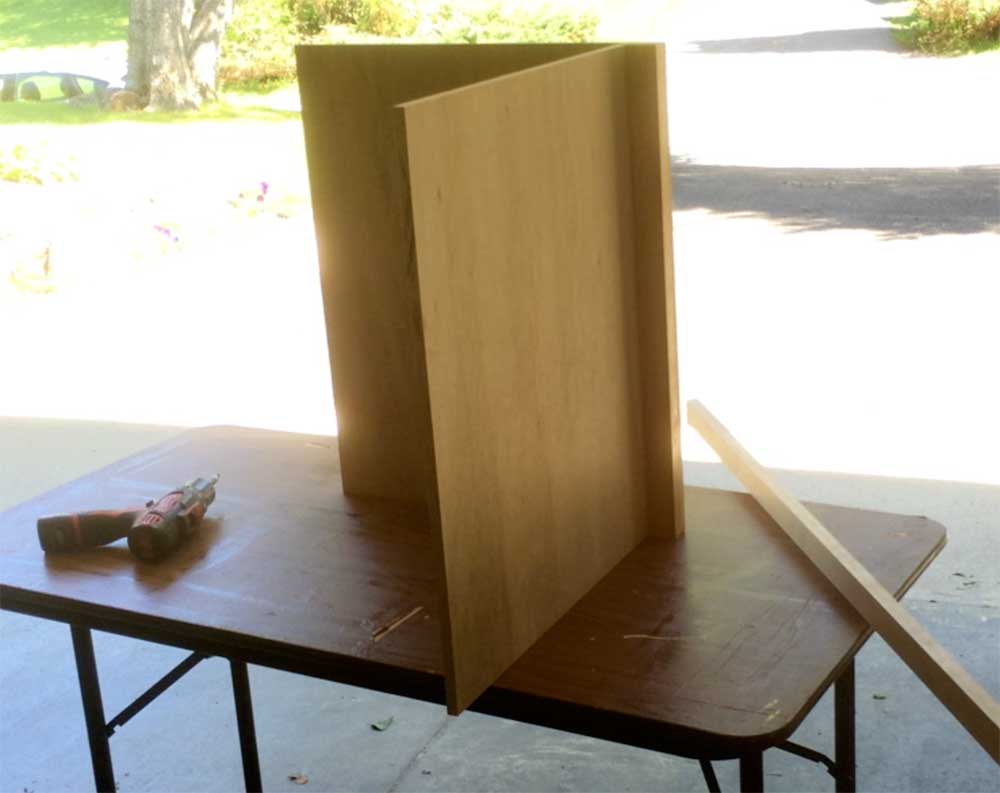 Another view of the box, after the brace is attached.

At this point you could be finished but you’d have to use something transitory for a top (like some fabric or cardboard). To properly finish the box you’ll want a top made out of plywood. To do that, first cut the other sheet of plywood in half.

In order to determine the proper cut line for the front, set the in-progress box on top of one of the halves. Be certain to carefully align the box to the edges of the half sheet. With a pencil, trace the footprint of the box. 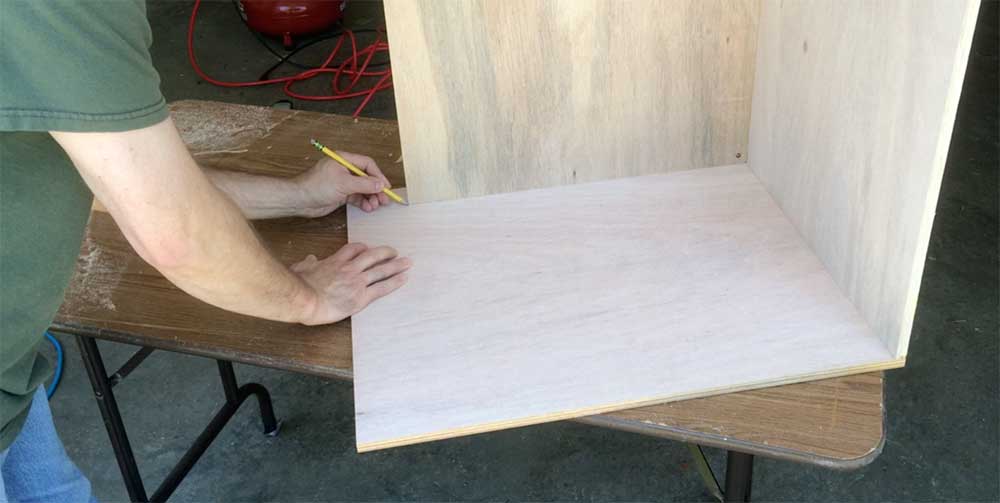 Tracing the base of the box onto the top in order to determine a front cut line.

Then, using a straight edge or a straight side of the remaining half sheet of plywood, draw a line connecting the marks which represent the free ends of the box. This will be your cut line. 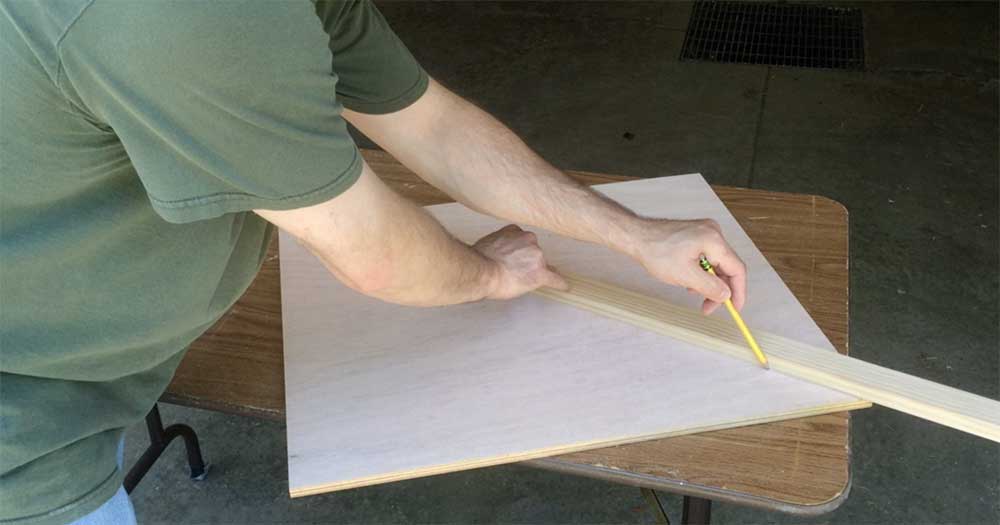 To make the cut, either use a circular saw, a jigsaw, table saw, or hand saw.

Once cut, attach the top. I suggest using screws, and to be careful to drive them in straight. If you screw in at an angle, the screw will likely poke through the side. 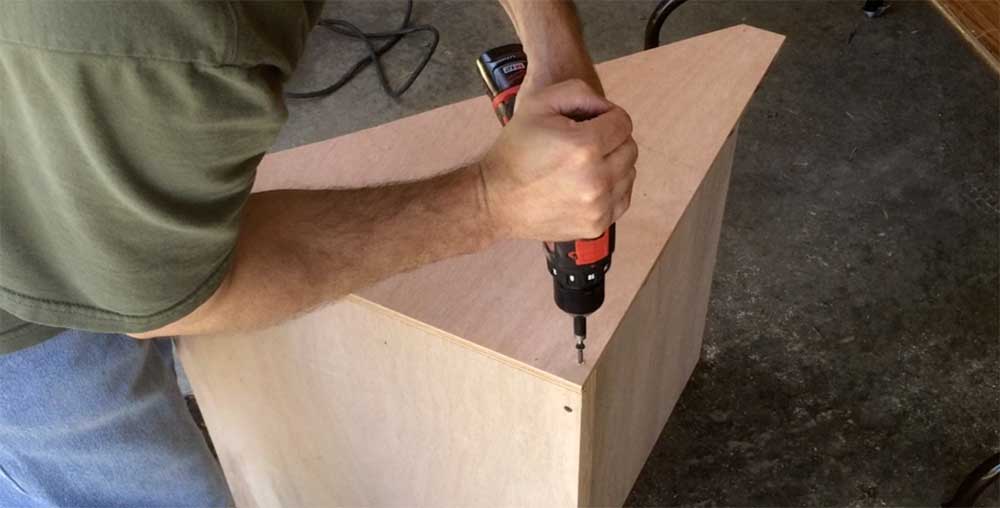 Next, paint or stain the box. For this, it is most common to use a flat, neutral grey paint.

Finally, attach a screw or a screw hook to one side if you intend to use the box for a hanging cast.