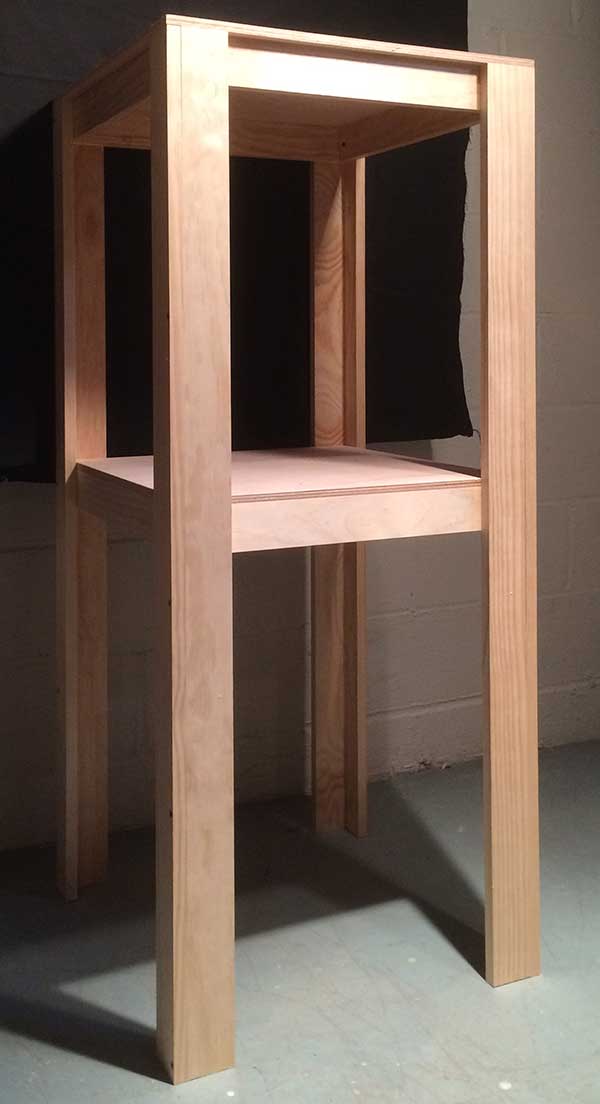 Over the years I’ve probably built at least a half dozen still life stands. In fact, the first thing I had to do when I began studies at Atelier LeSueur was to make my own. Was there a template or instruction? Well, that was back in 1984 and I no longer recall. It’s likely I just copied what someone else had done. This article will teach you how to build your own.

The still life stand is the most common piece of studio equipment found in today’s ateliers. Although designs vary, the basic function remains the same – to provide a stable support for casts and still life objects. Of course you also need height and therefore any old table will not suffice.

Before I go on you should know that you do not necessarily need to make your own because sculpture stands work fine as well. Here’s one from Utrecht, for $150. If you are an inexperienced woodworker and/or own few tools, something like it may be your best option. If none of that applies, you can save yourself some money by building your own.

I will give you a supply list at the end of the article but at a minimum you will need a way to connect pieces of wood together. This minimum assumes that you can get your local lumber supply to cut the wood to length. If that’s your plan you should know at the outset that most Home Depots and Lowes charge a small fee for anything over a limited number of cuts. Therefore, if you have your own saw, you may be in better shape and I will gear the rest of the article with that in mind.

Your first decision will be what kind of legs you want your stand to have. Assuming a 4 legged stand, there are two choices: single-stick or multi-stick.

Regardless of the type of leg, your first step is to determine the height of the stand. Generally you’ll want the top of the stand to be at mid-chest height. At that height, the top and the objects on it will appear at a pleasing level to your eye when you are standing in your viewing position. If your subject is a free-standing cast or hanging mask, that will also be at your eye-level.

Lumber in the US commonly comes in 6 and 8 foot lengths. You’ll need to make side braces (rails) as well and depending upon your height the left over from a 6′ board might be enough to use as a rail. That also depends on how large you want the top to be.

To find the leg height, either measure from the floor to the middle of your chest, or stand with one of your leg boards and put your hand on the board at mid-chest level. Make a mark on the board with a pencil. Next, measure the board from the bottom to the mark. In my case, that was 52″. Take that measurement and mark all the remaining leg boards. 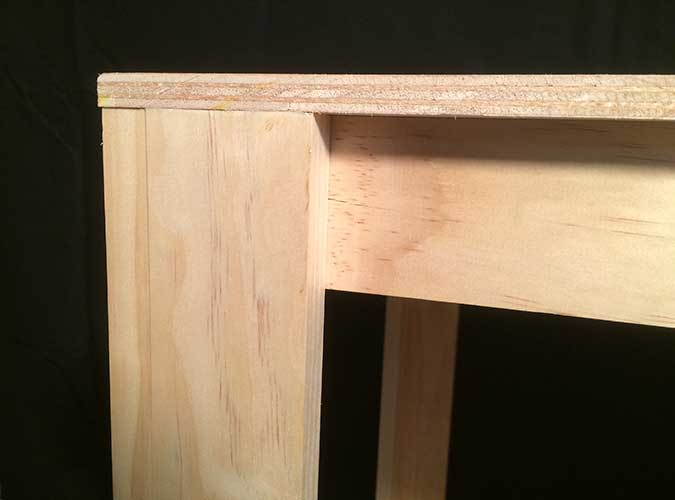 The top corner of a multi-stick leg design.

You are now ready to cut the legs to length. 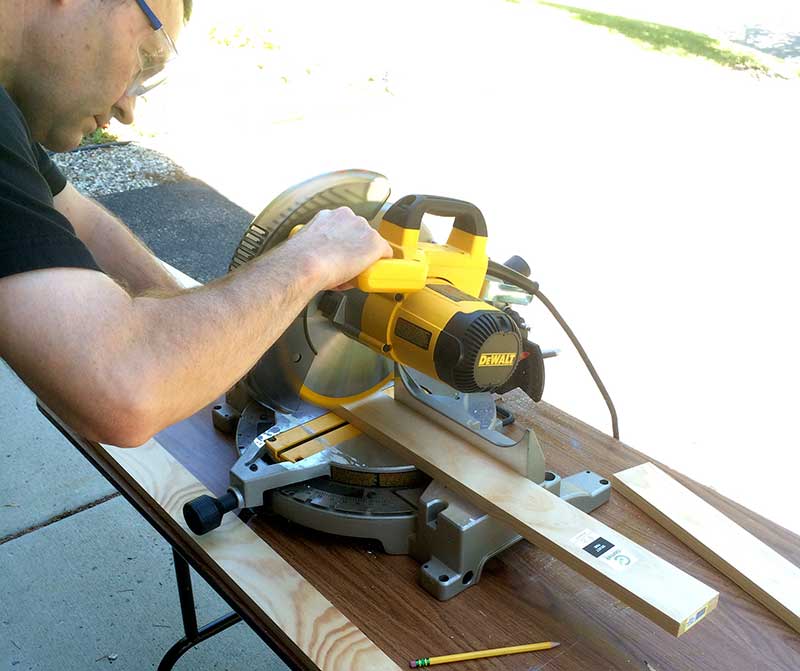 Cutting a leg to length with a chop saw. Of course, a hand saw could be used.

If you chose a single-stick design you’ll only be cutting four legs and you can move onto the rails. If you went with a multi-stick, you’ll be cutting eight boards. In both cases, make certain that all sticks are the same length.

For a multi-stick design, once you have completed the cuts, you need to connect the eight boards into four sets of two. The photo below shows me doing just that. I’m using a brad nailer with an air compressor but back in the day I simply used a hammer and nails. 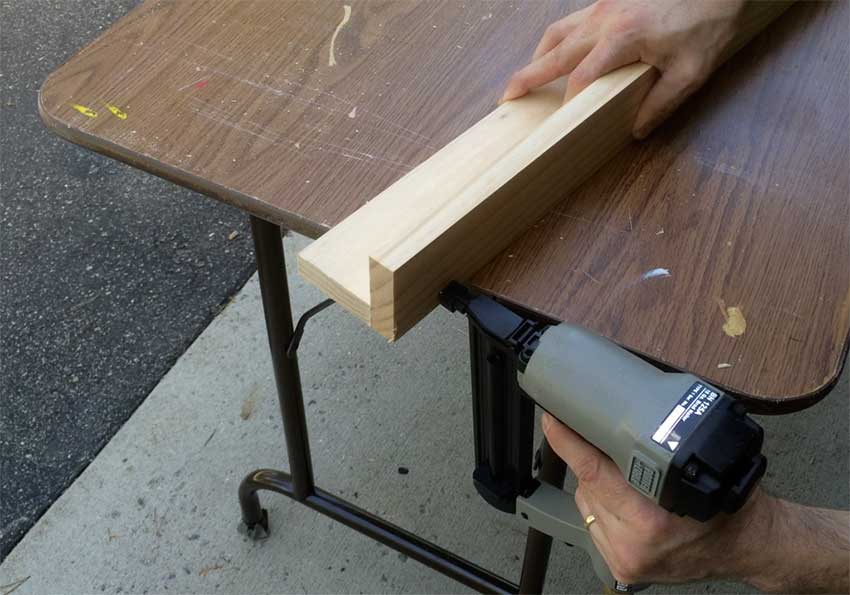 Attaching the leg components with a brad nailer.

If you are using a brad nailer, you may want to also go back and put in some screws. Doing that will make the legs more sturdy and less prone to come apart as the humidity changes. Be sure to pre-drill your screw holes. Note how I have the pieces arranged in the photo below, with one set of legs supporting the other while I drive in a screw. If you are using nails and a hammer this arrangement will also help stabilize things for you. 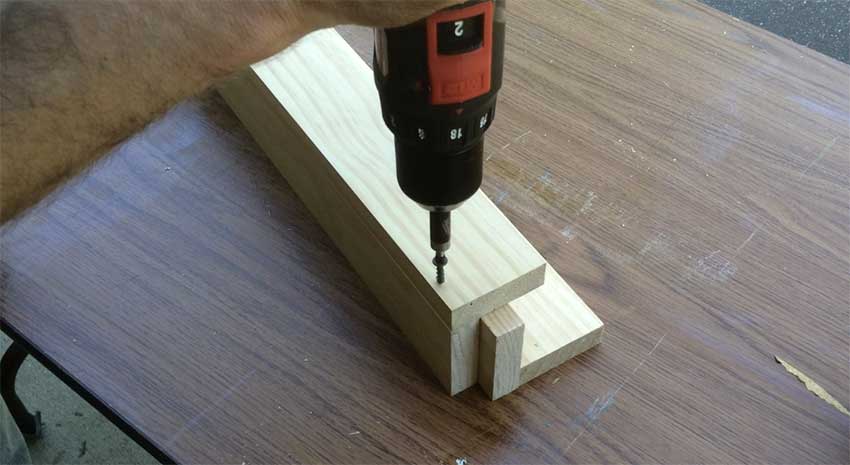 Screwing the leg components together.

Your next decision is to decide how large you want to make the top. Since I chose 52″ as my stand height, I had just under 20″ left over for a rail (the kerf of the saw takes away some of the wood when you make a cut). A 20″ x 20″ top is a little small, though it could work. However, I wanted a larger top and so therefore I needed additional lumber for the rails.

Regardless of the size, you’ll need eight, equally sized rails. One set of four rails serve as a platform for the top and the other set as a platform for the middle (this is usually a surface where you can keep your drawing and painting equipment). When attached to the legs, the rails keep them together.

To attach the rails to the legs takes a little bit of forethought. If you want a perfectly square top and middle for your stand, you’ll need to arrange the rails in a staggered pattern as shown below, on the left. If you’re ok with a slightly off-square top, then the version on the right would work. 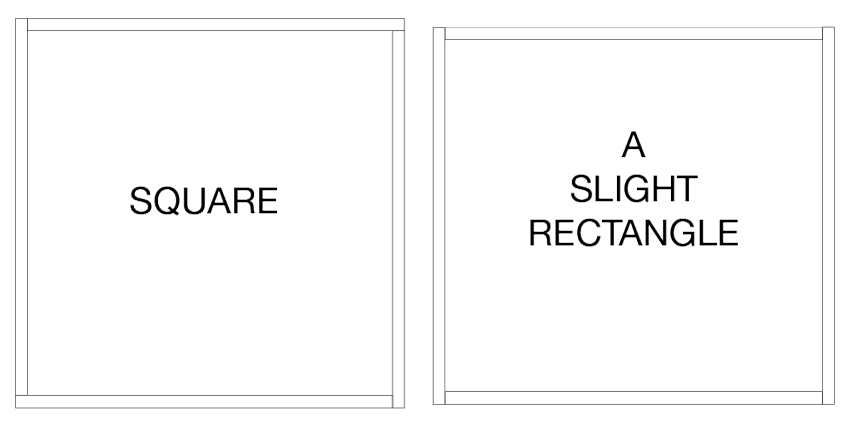 Actually connecting the rails to the legs might require additional help from a friend. Yes, you can do it yourself, but it’s easier with two people.

The image below shows me aligning two top rails with two legs. I wanted a square top so I am staggering the rails. 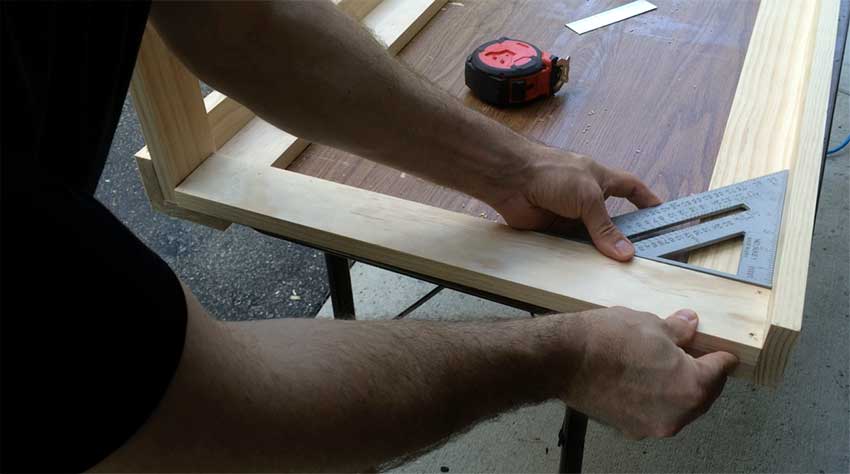 Aligning a rail to two legs. Notice that I’ve pre-drilled holes for the screws. This is something which could have been done after the rails were attached with a brad nailer.
I’m also using a set square to make sure the rails and legs are squared with each other. In that my cuts were square, I may not have needed to do this.

Once you properly align two legs and two rails, carefully nail or screw them together. Note that for the square-top design I’m using I will at times need to nail or screw from the outside as well as from the inside.

Also notice that my stand has the rails on the inside of the legs. Another option is to have the rails on the outside. Either way is fine, but I prefer inside. It works better if I want to attach a back board to the stand in order to hold a hanging mask cast.

The tricky part comes when you want to connect both sets of legs and rails into one stand. Here again, having a helper is almost a must. A square arrangement takes some three-dimensional thinking (and another set of hands) but an off-square arrangement is simpler. Hopefully, if you look carefully at the diagram below you’ll be able to figure it out. If you make a mistake you can always take the joints apart and refit.

This diagram represents the view from beneath a square-top stand. Two sets of legs are connected, each with a rail, and an additional rail is also attached.
Notice how the two sets will come together when they are joined.

At this point you should have four legs connected by four rails and the stand should be able to stay upright all on its own. You should also have four remaining rails. These are for the central shelf.

Measure half-way from the bottom of the stand to the top. Mark that measurement onto all four legs and attach the remaining rails using the exact same configuration as you used for the top rails. If you do not, your stand will end up being warped.

The final two steps are to create the top and the center shelf. If your top is less than 24″ across you can use a 2’x4′ sheet of ½” plywood or masonite. That size can be cut down so that you will also get your center shelf out of it.

To construct the top: 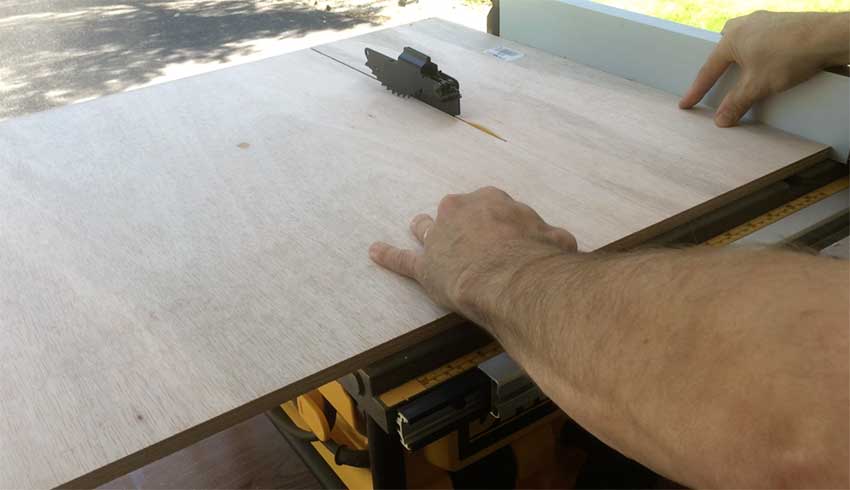 Sawing the top of the stand with a table saw. I removed the guard from the saw for an earlier project (do so at your own risk).

To construct the central shelf: 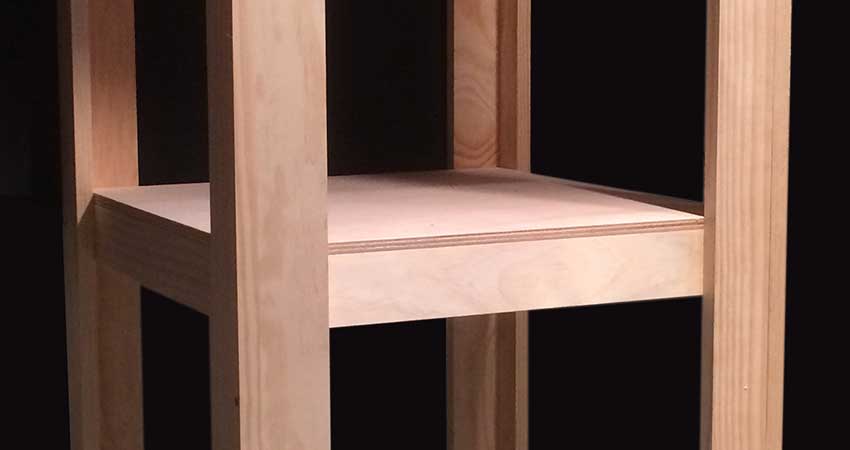 The central shelf in place.

Paint or stain the stand to help prevent the wood from warping and you are done!

Now you just need a shadow box. Take a look here for directions.