The Two Faces of Velazquez

This is the 4th article in a series on modeling. Part 1 is here, part 2 is here, and part 3 is here. 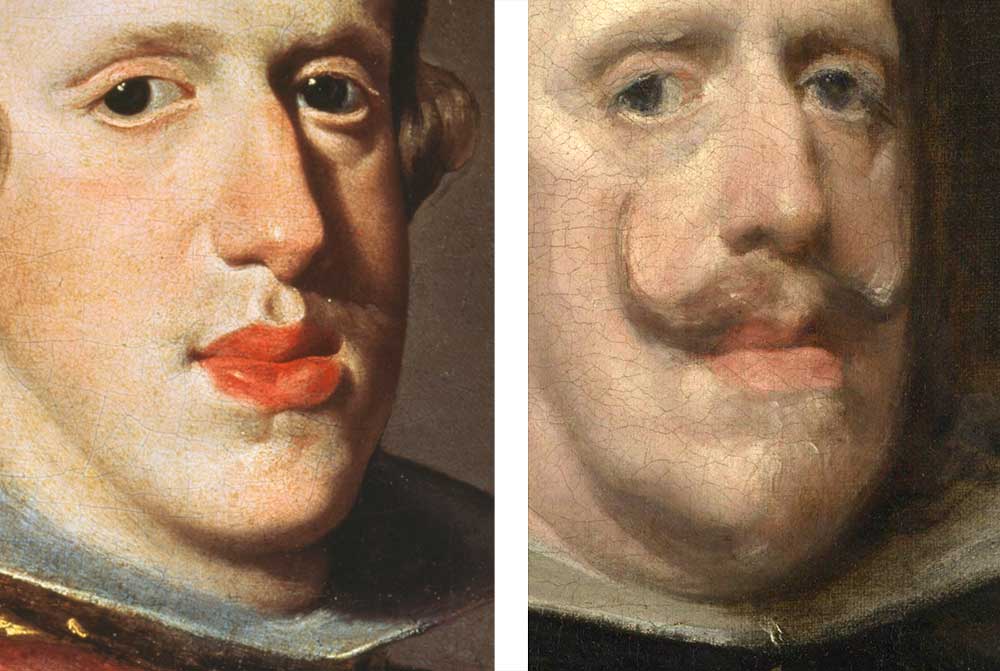 Through the other articles in this series I have described the two main approaches to modeling as well as presented some of the history behind them. This article focuses on a single artist who managed to model using both approaches, each during two different stages of his career: the two faces, or periods, of Velazquez.

Velazquez’s teacher was Francisco Pacheco. The few surviving works we have by Pacheco show that Velazquez was indeed under his influence during the early part of his career. Evident in the works of both master and student is a clear attention to detail. The result pulls the viewer in, as in physically nose-to-nose with their paintings. You can see this for yourself in the two paintings below. Notice that each painting a composed of separately observed details. Were you in front of the real paintings, you would feel the urge to walk up close to them, even though you would not consciously be aware of it. 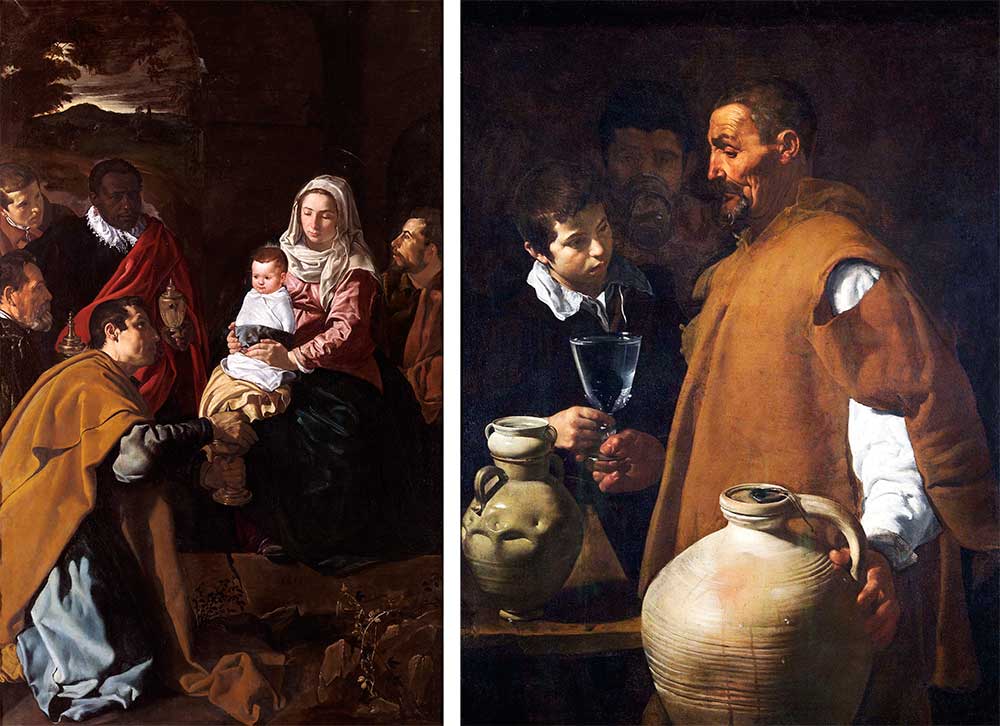 Conversely, The Spinners, shown below, is a painting done as an entire ensemble. No part was painted without attention to the other parts. Were you to see this painting in person, instead of being drawn closer, you would subconsciously position yourself thirty feet back (or more), away from the painting so that you could view the entire painting at once. Note that the painting is roughly seven by ten feet in size. 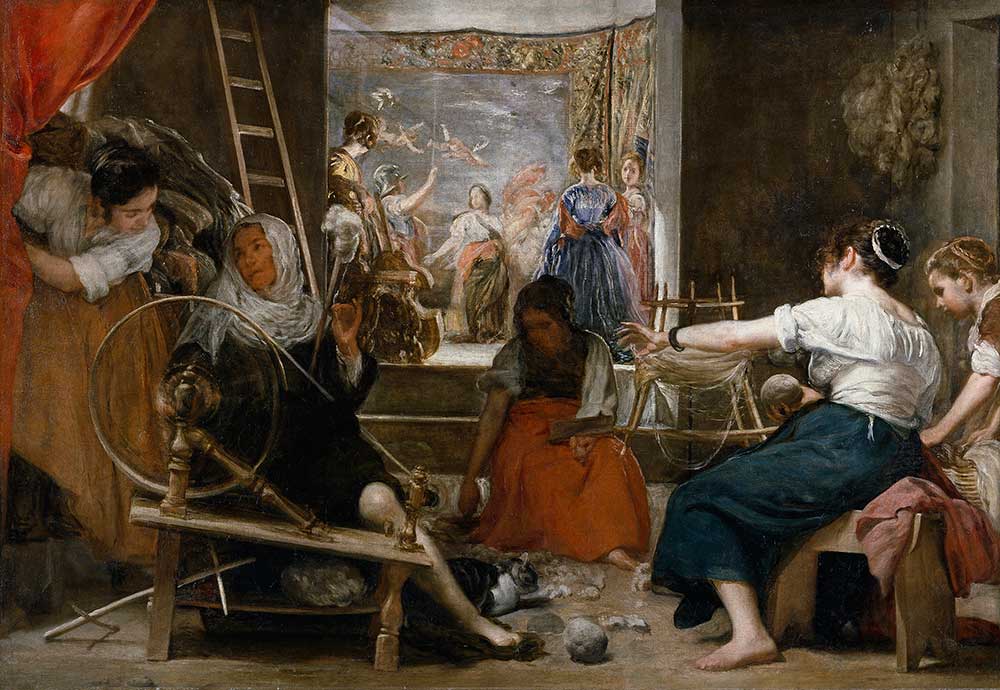 It is interesting that in 1628 Peter Paul Rubens came to Madrid. Velazquez accompanied him to view the Titians at the Escorial, King Philip’s residence. Then, In 1629, Velazquez was sent to Italy in order to purchase paintings (most especially, Titians) for the king. He spent a year and a half there.

On visual evidence alone, many conclude that Velazquez’s contact with Rubens and his subsequent trip to Italy directly led to his conversion from form to value, from Disegno to Colore, and from mind to eye.

Velazquez taught his eye so to report sight that he could render the familiar or the unfamiliar and could communicate directly with what was before him without the intervention of traditional rules or scientific study.1

Below is Velazquez’s painting titled Los Borrachos, or The Triumph of Bacchus. He painted it during his acquaintance with Rubens in 1628/1629, just before his first trip to Italy. Much of the painting was done piecemeal, except, perhaps, the figure of Bacchus. To me, this painting was one of the turning points in his career. In it we see an artist of the mind beginning to rely more on his eye, in pursuit of the visual impression. 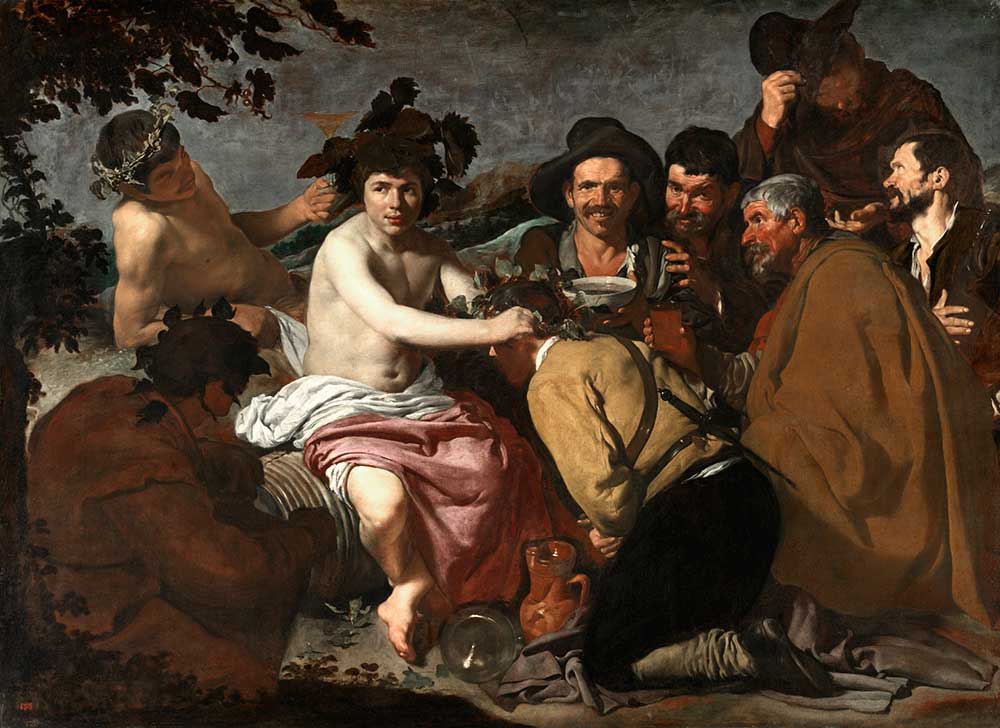 Below you can see two of the faces in the painting. On the left is one of the drunks. On the right is Bachhus. 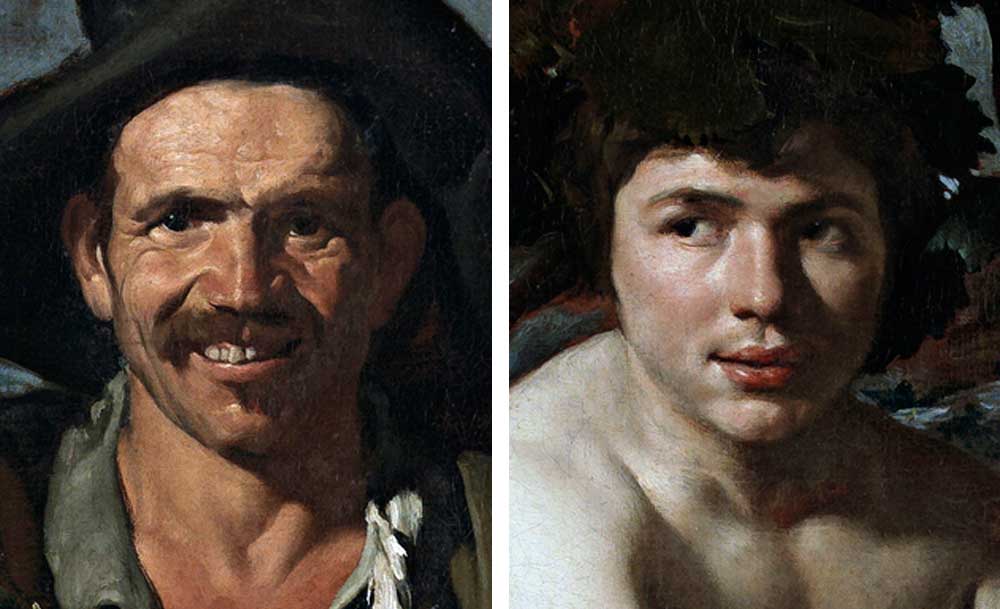 But let’s get back to Velazquez’s portraiture, his approaches to modeling, and more evidence of the turning point. Below are the full versions of his portraits of Philip, which were shown in detail at the top of this article. Notice how, in the earlier painting from 1627 (on the left) he models the face piecemeal but has begun to model the whole in the drapery area. The portrait on the right, from 1656, reveals a full understanding of impressionist sight. 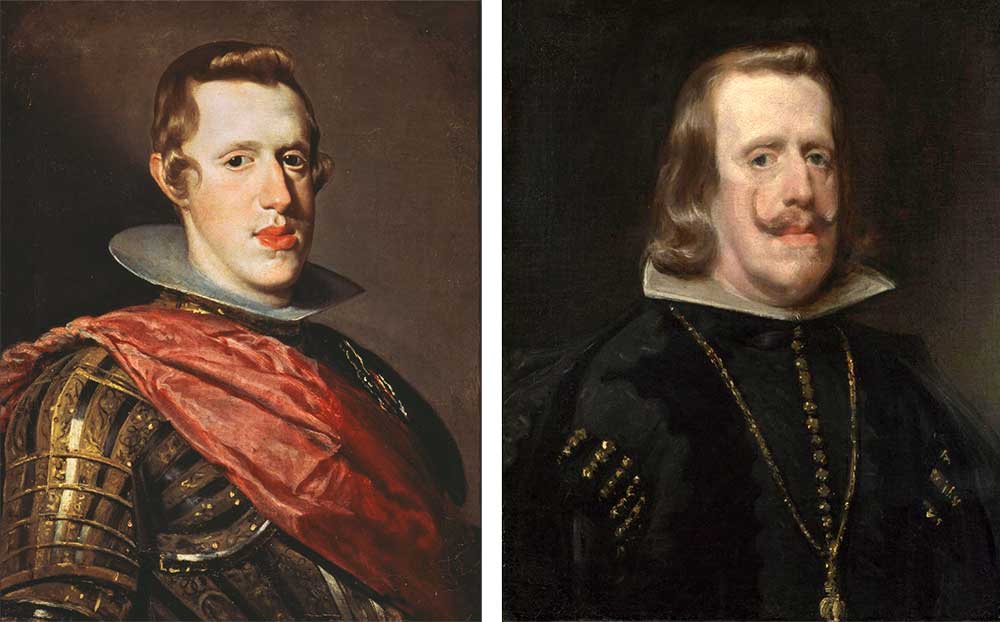 Below are two more pairs of examples, showing the change in Velazquez’s approach to modeling. 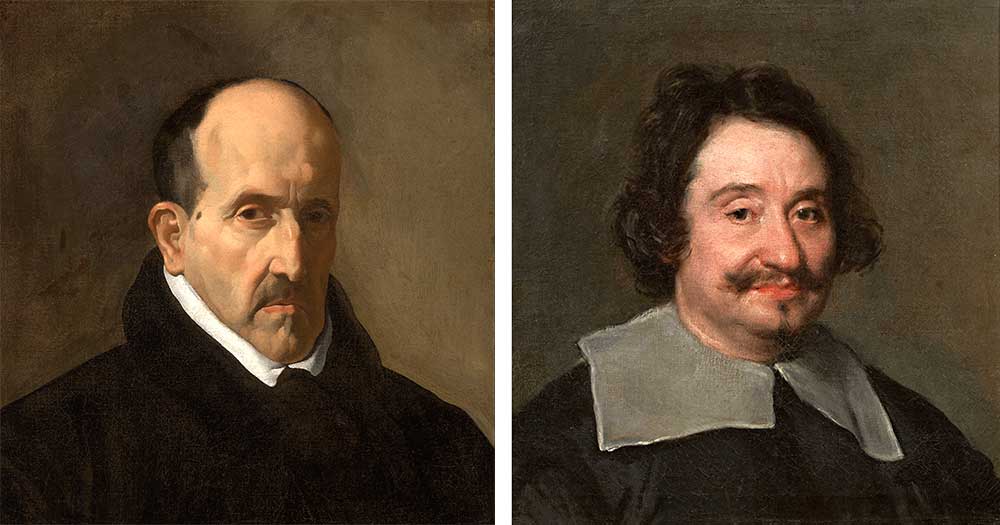 On the left, Velazquez’s Portrait of Don Luis de Gongora (1623) and on the right his Portrait of the Pope’s Barber (1650). Both images are slightly cropped.

On the left, Velazquez’s portrait of his teacher (and father-in-law), Francisco Pacheco (1620). On the right, his Self Portrait (1640). Both images are slightly cropped.

Did Velazquez begin to use Sight-Size after his introduction to Rubens? Or, did he ever use Sight-Size at all? Those are questions which cannot likely be answered definitively, and I will therefore make no such claim. However, there is circumstantial evidence that appears to support that he did.

Painting what your eye sees as an ensemble is quite difficult when not in Sight-Size, as is modeling that effect from your conception. Furthermore, most of the paintings done during the second half of his career have a definite viewing distance from where the painting comes into focus for the viewer. Again, achieving that in any sort of effectual way would be almost impossible if he was viewing the painting in a different visual scale than the scene.

The British School under the guidance of Sir Joshua Reynolds, as well as Sir Henry Raeburn, brought impressionist sight forward from the Baroque period, often using Sight-Size. Later, popular nineteenth-century teachers such as Léon Bonnat and Carolus-Duran passed their obsession with Velazquez down to their students, the most well-known being John Singer Sargent. 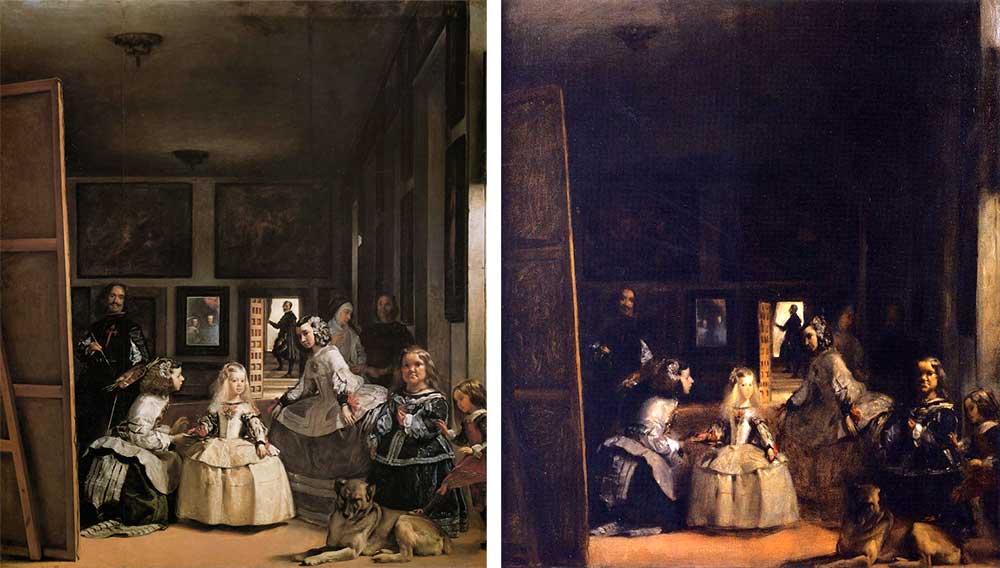 Velazquez’s influence continues, not only through his paintings but also through his way of seeing and modeling nature. In the present day, schools such as The Atelier Studio Program of Fine Art, Charles Cecil Studios, The Florence Academy of Art, Sarum Studio, JHess Studios, The Great Lakes Academy of Fine Art, along with many others, continue to teach students how to see the visual impression, through Sight-Size.

1The Art of Velasquez, by R.A.M. Stevenson (1895), page 104. Stevenson was a student of Carolus-Duran’s, alongside John Singer Sargent.