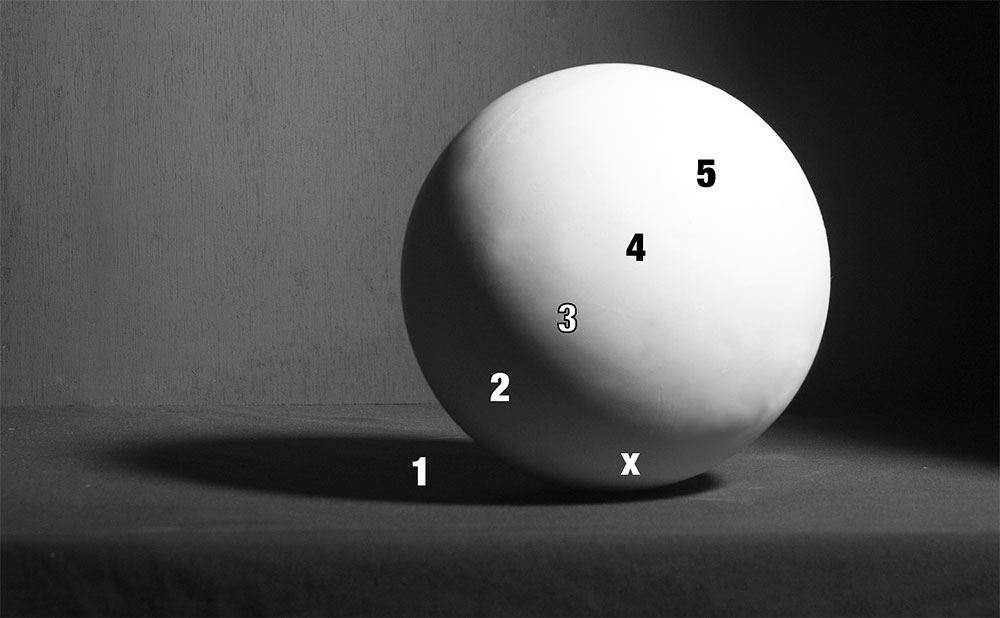 A classically lit sphere with the 5 main levels of value indicated.

Depending upon how deep you want to go, the principles of light and shade can be quite complex. Nevertheless, everything hinges on the fact that light travels in a straight line. Upon hitting a surface light also reflects back in a straight line. How much of that light reflects back to your eye is dependent upon whether the surface is in the world of light or in the world of shadow.

Artists tend to categorize observed values into discrete levels, even when the separations are not always visually distinct. With that in mind, I teach my students to initially look for five main values on their casts. These are shown on the classically-lit sphere in the diagram above. They are listed below, from dark to light:

You will notice two things in the list. The first is that it does not include reflected light. Reflected light, which can also called indirect light does not hit the sphere directly from the light source. Rather, it reflects off of something else and then onto the sphere. As such it is not often counted in these kinds of lists. In the diagram I label the reflected light with an X. You will also recall the previous article, Flat As A Hat.

Here I am using my hand to reflect light into the shadow side of the cast.

What separates the two worlds? The bedbug line.

A potential problem with this concept are the halftones. However, some languages translate the English word halftone as half light. That translation makes it more clear.

Think about it this way: neither the cast shadow nor the shadow receive direct rays from the light source. In other words, to be in shadow means that no light is present. But, in various degrees, the halftone, light, and highlight areas do receive some direct rays of light. This includes the darkest halftones, for no matter how dark a halftone is, it is still receiving some amount of direct light.

Being aware of the difference between the world of light and the world of shadow will help you to not only accurately record the observed values in the scene, it will also help you to avoid over-modeling (which is making the halftones too dark).

This article had as its genesis my book, The Sight-Size Cast. To get your copy, or to simply learn more about the book, see here.