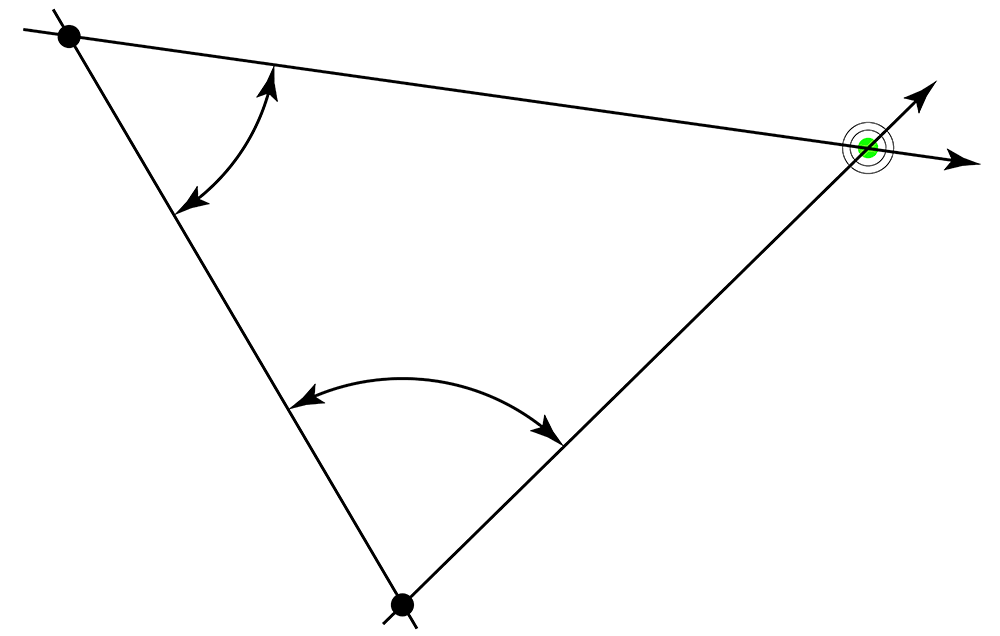 Of all the ways we have to check the accuracy of a guess for the placements of a shape’s salient points*, triangulation is the most effective. It is an important concept to understand, whether you are Sight-Sizing at life-size, or not, for it allows you to plot all the salient points on your source in a relationally accurate way.

The American Heritage Dictionary defines triangulation as: “The location of an unknown point… by the formation of a triangle having the unknown point and two known points as the vertices.” Unless you recall your high school trigonometry, that definition is probably confusing. The actual process is far simpler than is its explanation.

You must get your spots in their right place and your lines precisely at their relative angles.

John Singer Sargent, as quoted by his student Henry Haley.

In the quote above, Sargent tells his student that he must be mindful of the placement of the spots and the angles of the lines. Once you understand what triangulation is, it is not a stretch to see that Sargent is recommending the technique.

To help explain the process of triangulation I will use a drawing from the Bargue-Gérôme Cours de Dessin (1866) and the block-in stage of a cast drawing. While the source for my first example is a drawing, as you will see a bit later, triangulation works equally well with actual objects.

The source image is on the left and the drawing is on the right.

Looking at the diagram above, let us say that you have decided where the top and the bottom of the drawing will be on your paper and that this is shown by the gray, horizontal lines over the source image. Furthermore, you have decided upon a center-line, as is shown by the vertical line on the source image. Through these lines, points 1 and 2 are now known. Your task is to precisely determine the location of point 3.

To accomplish this you would first make a guess, which is something that you must always do before you mechanically measure. If you measure first, your eye learns nothing. After your guess, you could try to measure from the center-line to the target, and also from the top or bottom lines to the target. These measurements might get you close.

Oftentimes a better, faster, and more accurate way would be to triangulate. After your initial guess for point 3, you would use the edge of your pencil, charcoal or brush to determine the angle between point 1 and point 3. Next, you would do the same between points 2 and 3. The precise location of point 3 is exactly where those two angles intersect.

Finding the location through triangulating does another, very good thing. It maintains the relationship between the locations of all three points. This means that the nose you drew so perfectly on that portrait, will also be perfectly placed relative to the other features on the subject’s face.

Triangulation, step 1 after an initial guess.

Writing of noses . . . Let us look at the process of triangulating on my drawing of the cast of David’s nose. At this stage I had already found a center line, as well as the top and the bottom of the cast. Additionally, I have determined the width of the top of the cast. Notice too that I am left-handed. Therefore, in the demonstration photographs my drawing is positioned to the left of my subject. Those who are right-handed would switch the arrangement.

The unknown point for which I am searching is the left side of the cast at its middle. Although it is small, you may be able to see in the photograph that I have already made a guess as to its position. I circled the guess in green on the photograph.

To triangulate that point as a means to check my guess, I stood in my viewing position, closed one eye, and held my arm straight out. I then visually placed a straight side of my charcoal stick on the cast, from the upper-left corner to the point on the cast whose position I am confirming. You can see this in the left-most photograph above.

Once I had properly aligned the charcoal to the correct angle, I did my best to keep the angle stationary. Holding firm is key, for if you rotate your wrist as you move over to your drawing, the angle you found will be different than the one you will transfer.

To make the transfer (seen in the right-most photograph above), I kept the aforementioned arm position in place and then moved it over to the drawing from my shoulder joint. If my guess was correct, the angle of the charcoal would cross through my guess mark on the paper. If I was incorrect, it would not and the error would help me to recall the proper angle when I go to re-draw it. On this drawing I did not actually draw a line on the paper to represent the angle I found, though I often do.

Triangulation, step 2 after an initial guess.

So far, I am only half way there because I still need another angle to properly determine the correct position of my guess. To do so I followed the same procedure as before, only this time I will use the center line where it crosses the bottom of the cast as my starting point. You can see this in the photographs above. Here again I would normally draw a light line on the paper to indicate the angle, but since my guess was close enough I skipped it on the actual drawing.

As is hopefully clear, the place where the two angles cross is very close to the position of the target point on the cast. Be aware that a number of variables can affect your accuracy when triangulating so it is not a perfect form of visual measurement. Having a steady hand and arm is a must, as is checking the results through another round of triangulation. An even better help is to triangulate from an additional set of known points.

Despite the potential for error, for most students triangulation will be accurate enough that it becomes their go-to technique for blocking-in a drawing. Whatever errors occur will be noticed as the drawing proceeds, most likely when more of it is drawn in, and also through flicking. 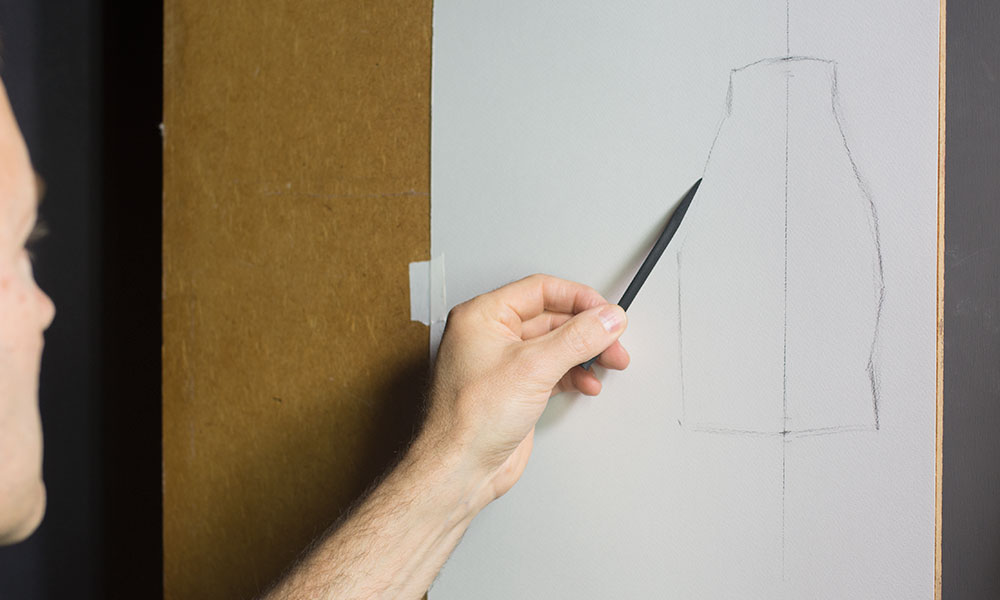 The process of triangulation helps you to keep the big-look in mind while you are drawing. This is because it relies on comparing two parts of the image to find a third. As you get more points correctly triangulated, they become knowns and are therefore additional points from which you can triangulate. In this way, each shape is related to every other shape and the drawing is done as a whole instead of in a piecemeal way.

* A salient point is any place on the contour of a shape where a major directional change occurs.

This article was a selection from my book The Sight-Size Cast. If you want to learn how to see better so that you can draw and paint better, see here.