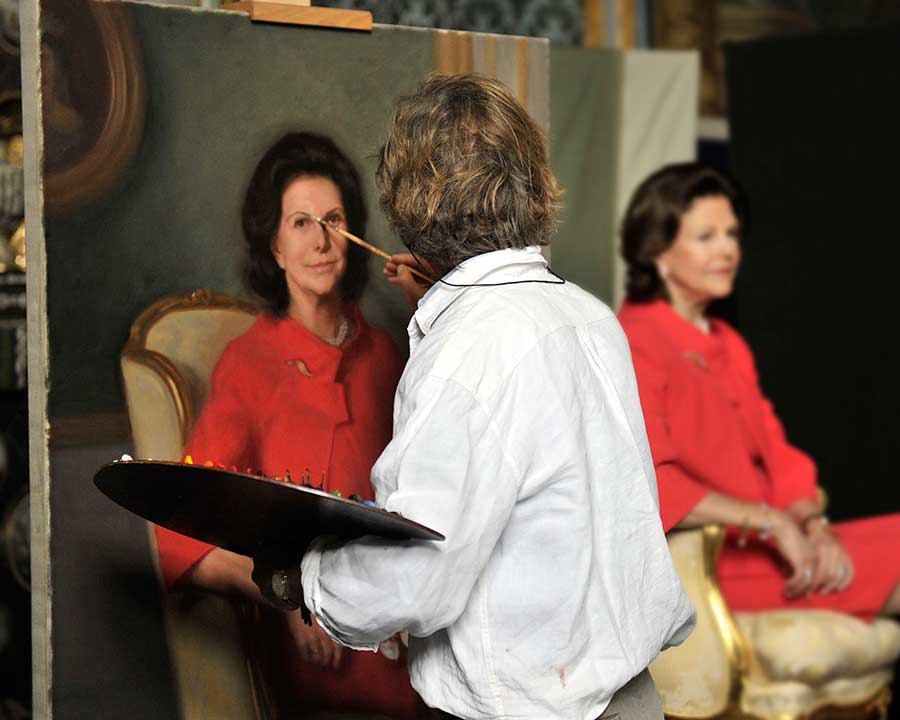 Urban Larsson is a Swedish artist and a friend from well over twenty years ago. We attended Studio Cecil-Graves together in Florence and were briefly roommates. Since that time he has gone on to make quite a name for himself in the world of European portraiture. He lives with his wife Lara, an art restorer, and their three children in Amsterdam. I was very pleased to interview him via Skype and at the same time rekindle an old friendship.

Urban was born in Stockholm, Sweden in 1966 and has lived and worked in Amsterdam since 1991. He initially studied Art History at the University of Stockholm. In January 1988 he went to Florence, Italy to study at Studio Cecil-Graves for half a year. He then spent a year studying Architecture at the Royal Institute of Technology, Stockholm before returning to Florence to continue his studies at Studio Cecil-Graves. At the time, this was the only atelier in Europe where traditional realism was still being taught. He spent in total nearly three years there, learning drawing and painting and being introduced to the visual language, philosophy and techniques of painters from earlier centuries. After his studies in Florence, he moved to Amsterdam to settle as a painter. 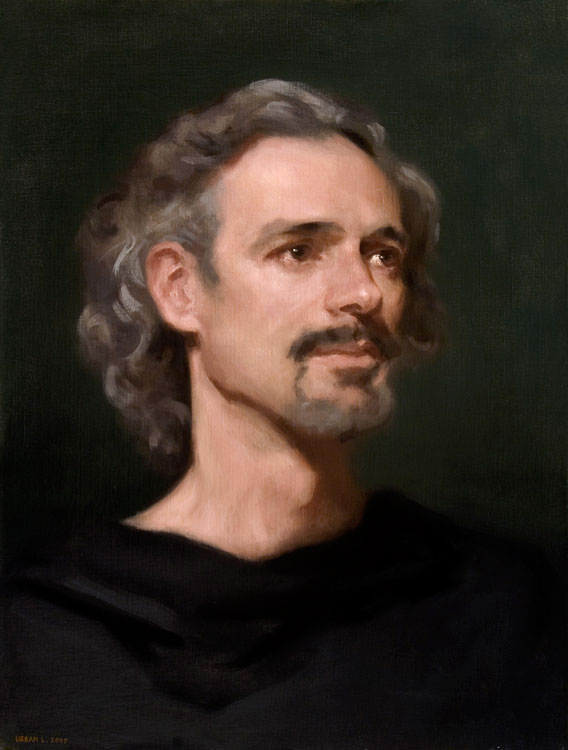 One of the things those of us who studied with Charles Cecil share is a preference for painting directly from life, in Sight-Size. This is an aspect of Urban’s procedure to which he has stayed true, even though many of his subjects are government officials and royalty. As you might imagine, much of our conversation centered on his experience managing the requirements of Sight-Size with his various sitters. 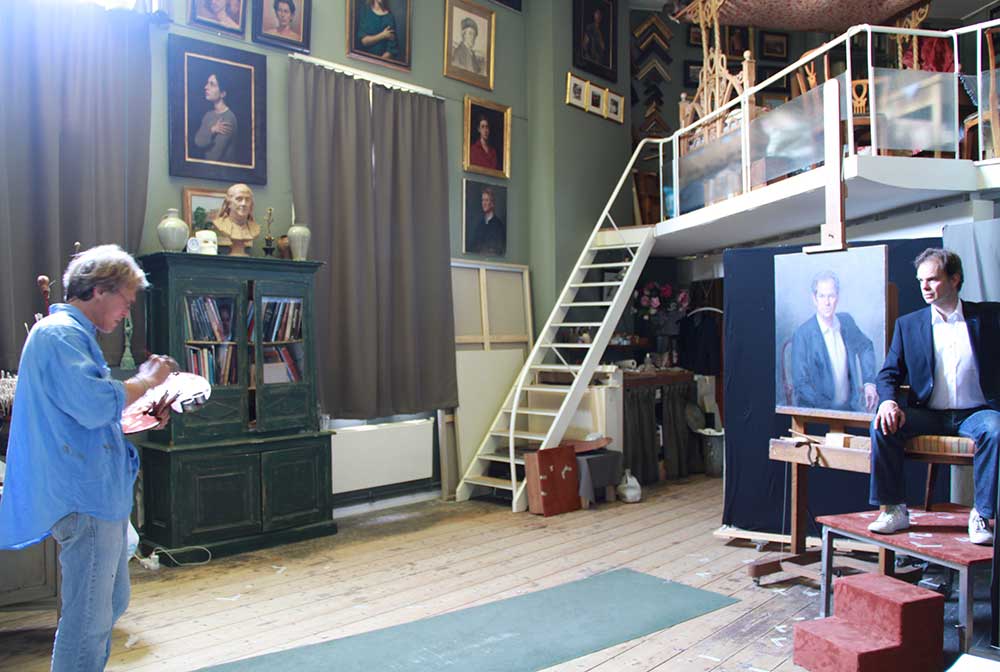 This photograph shows Urban painting Hein van der Heijden, who won the best actor award in the Netherlands in 2012.
Notice from where he is viewing the sitter. This is what Charles Cecil calls a “heroic distance.”

Here is a photograph from the same painting session, this time with Urban at the canvas. From that position, he will never look at the sitter.

Since 2007 Urban has had the good fortune to work in the former studio (built in 1898) of George Hendrik Breitner (1857-1923), an Amsterdam Impressionist. You can see his studio in the two photographs above. 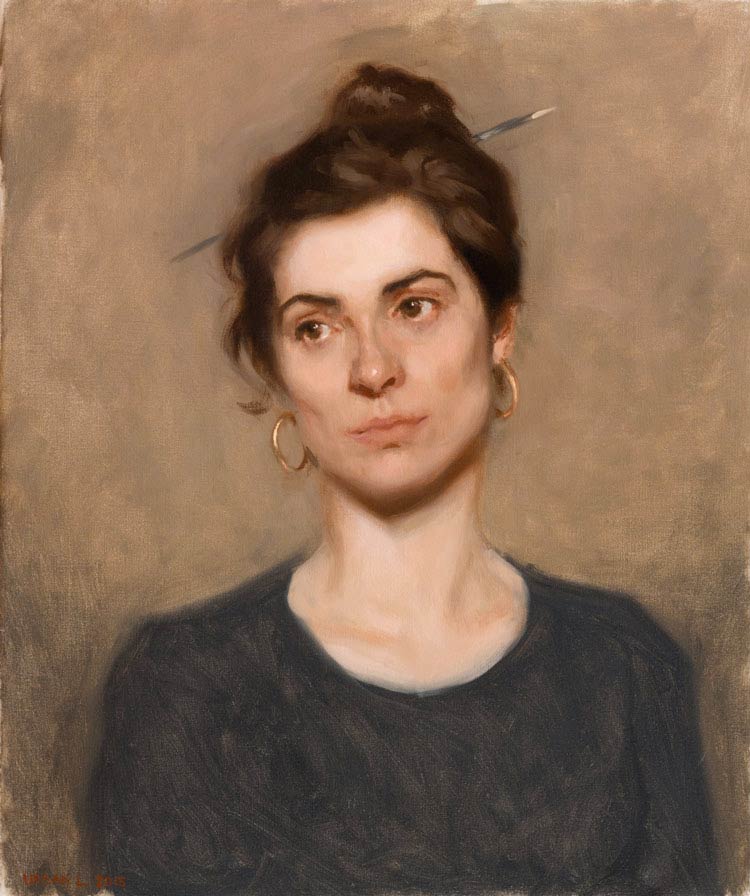 Urban’s commissions are at times done at a location other than his Amsterdam studio. Of interest to me was how he managed to secure studios that met the necessary requirements needed for Sight-Size, in a place which was not his own. In Sight-Size, the larger the painting, the farther back the artist needs to stand when viewing the subject and painting together. Further complicating the task is that Urban does not use artificial lighting. In addition to the distance requirement, larger paintings also necessitate a higher light source. All of this means that he needs a somewhat large space, with high ceilings and a high window, preferably facing north. If the client cannot provide a suitable space, he sometimes temporarily rents space himself.

A funny anecdote involves a Serrano ham. On location in Madrid, Spain, Urban had to use a makeshift studio which was in the house of his client. To traverse the distance between his viewing position and his canvas he had to walk around a large ham that was protruding from the kitchen table, being dry-cured. Fortunately, he had just enough of a view from his viewing position to see his sitter on one side of the ham. 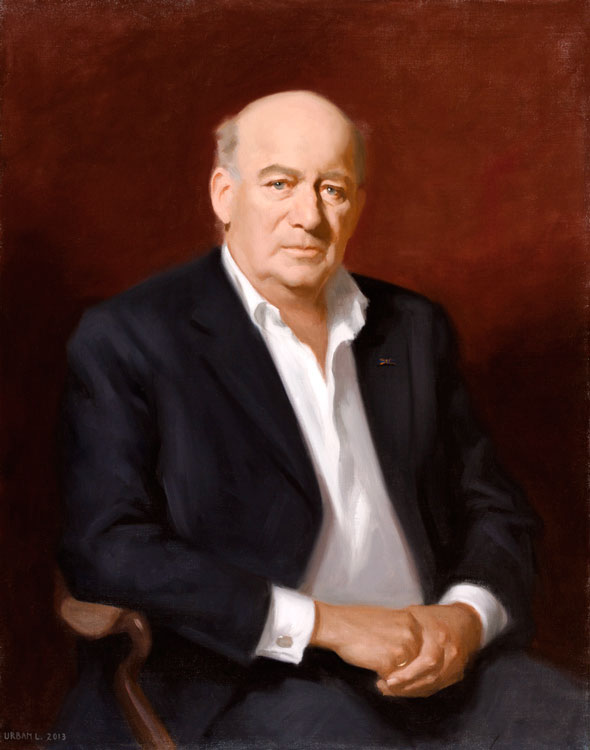 Of course, time is a major concern for a portrait painter, both that of the sitter’s as well as the artist’s. How long a portrait will take to complete is a question that has no singular answer and that is due to many factors. In Urban’s case he estimates between five and nine sessions, with each session two and a half to three hours long. His subjects know this in advance. While some question why he will not simply use a photograph (which would require much less of their time), he explains that they are paying for a painting from life. Its qualities are not like those of a photograph or a painting from a photograph. The process is different. The result is different. And it is, in part, those differences for which they are commissioning him.

He has found that, after a session or two, most of his clients come to look forward to the sessions. He, like many portraitists, tries to engage the sitter in conversations during the modeling sessions. This not only helps to keep the subject interested and lively, but it is also something which Urban himself finds very important and quite enjoyable. 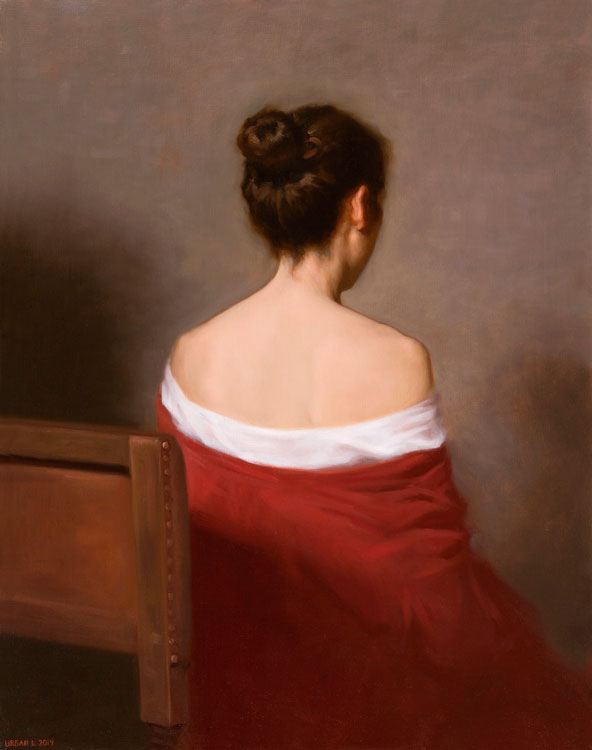 Another help in keeping the subject interested in the process is a large, studio mirror that he sets up in a position so that the subject can view the progress of the painting. As Urban continually steps back into his viewing position and then walks up to the canvas in order to paint, the sitter can see himself and the painting in the mirror. Many of his sitters find this quite absorbing.

A couple of times a year Urban returns to Florence to assist Charles Cecil in teaching Sight-Size portraiture. He plans to do more of that in the future.

Urban has quite a few pieces of advice for students but I will summarize them as follows. Studying painting takes commitment. If you are serious about it, completing your training as a painter takes time, effort and focus. 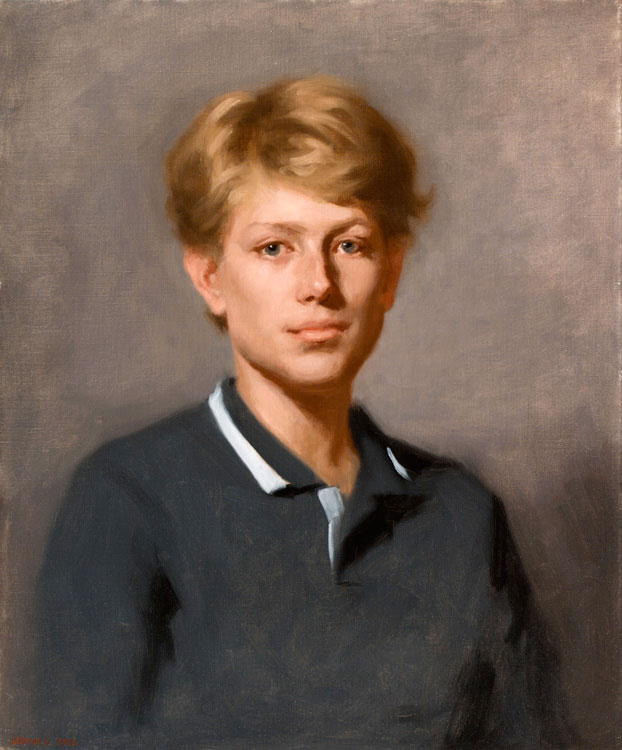 One of the issues confronting present-day representational artists is a criticism that our work is not contemporary. Of course, what is contemporary if not now? Urban’s hope is that viewers a hundred years in the future will not only appreciate his works but also see them in a broader picture, anchored in and being part of the history of Western art – that his paintings reflected our time. 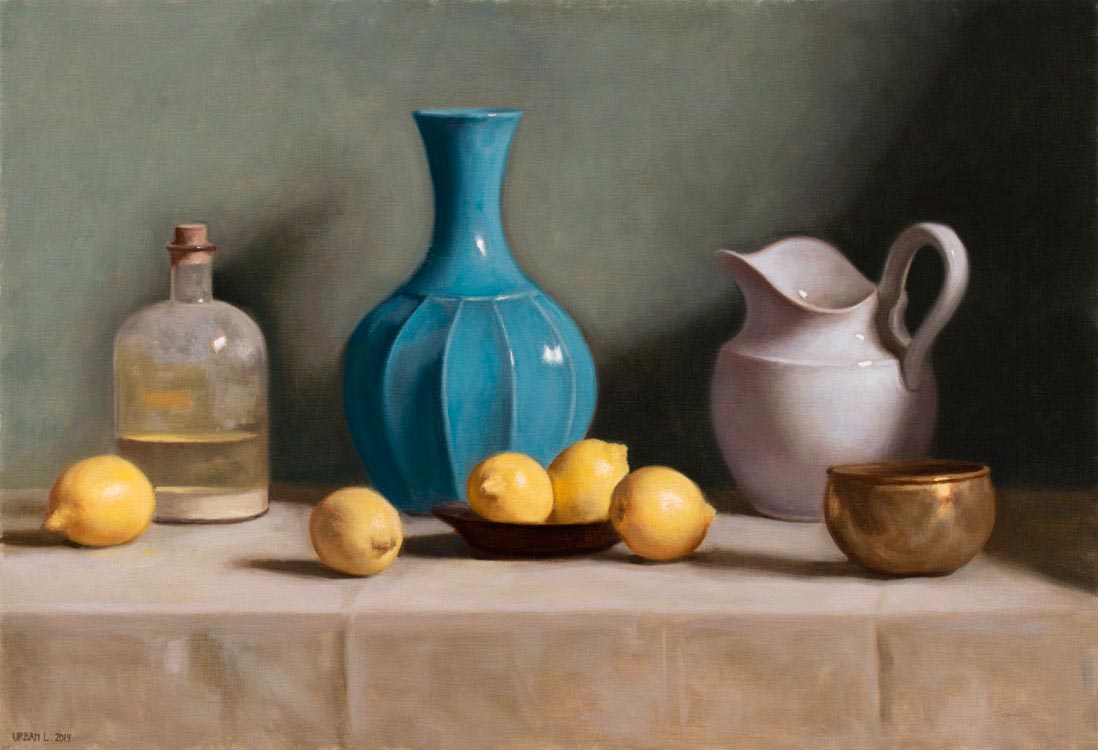 Although I have focused this article on Urban the portraitist, he is also noted for his still life, landscape and figure work, also painted in Sight-Size and from life.

Coming in 2016 will be the unveiling of two, life-size, full length portraits of the King and Queen of the Netherlands, which Urban is currently working on. Additionally, in the spring of 2017, there will be a retrospective exhibition of his work at a museum in Stockholm. This exhibition will travel to a museum in the Hague, The Netherlands in the summer of 2017. 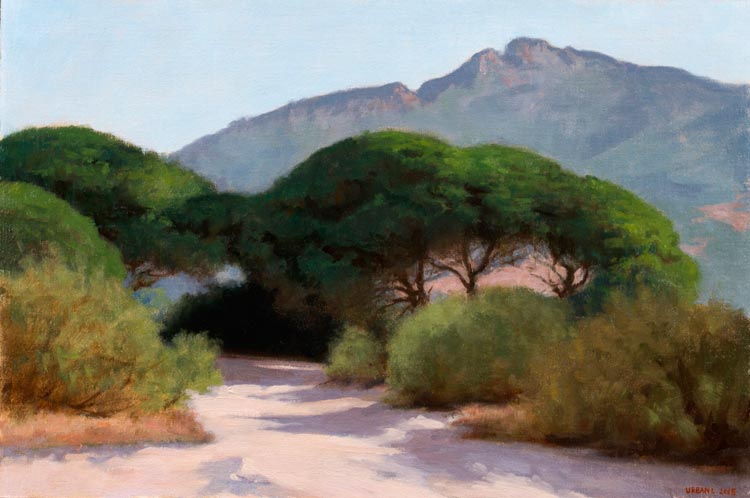 To see a short video of Urban working on a portrait painting, click here.