What is a Critique? 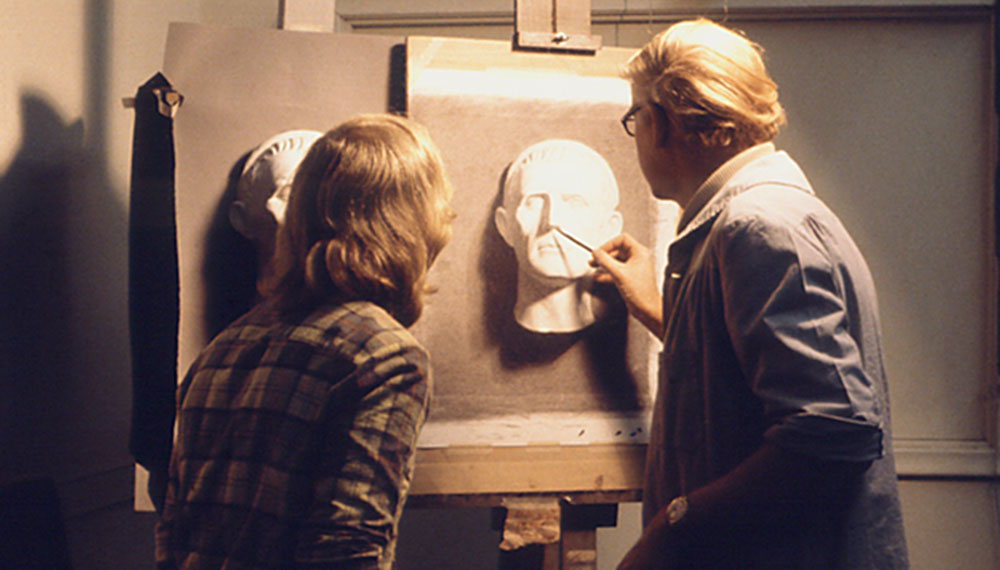 One of the advantages of attending an atelier is partaking in an established system of regular critiques. Such critiques are arguably the most beneficial part of one’s training because it is through them that the master’s eye gets passed down to the next generation. Given their importance it’s wise to wonder, “what is a critique?”

Imagine yourself working on a cast drawing at a traditional atelier. The room is dark, but for the lighting illuminating your setup. You may be teamed with another student, with your drawing board on one side of the cast, and your studio-mate’s on the other, or you may have your own setup.

You already know and follow the basics because when the term began your teacher put charcoal to paper and did a quick demonstration of the principles. Since you’re in Sight-Size you have developed a rhythm of walking back and forth between your vantage point and your drawing board.

It’s Monday and your teacher has begun critiques. He or she shows up twice per week so as to give you ample time to work on your drawing.

Odds are you have headphones on and are listening to whatever moves you. However, knowing that you might glean important information when overhearing the critiques of other students work, you remove your headphones and pay attention.

After awhile, it’s your turn.

To begin, your teacher positions themselves at your vantage point. This aspect is critical, for it is only from your precise vantage point that they can see what you are seeing and trying to draw.

The importance of the vantage point cannot be overstated. It is one of the 3 Keys to Sight-Size. It also cannot be more obvious. How can your teacher give you a valid critique if their eye is not where yours was? The answer, at least for the questions of shape accuracy, is that they cannot.

This means that your teacher will somehow need to get to your height. Mr. Gammell, as some know, was quite short. Due to that he often stepped up on a box, something he called the equalizer. I once had a teacher on the other end of the height spectrum. He was 6’8″ and had to sit on a stool to get into some of the student’s vantage points.

But height is only one element of the vantage point. Distance and lateral position are the remaining two. You likely have a short strip of tape on the floor that you use to position yourself. Your teacher uses it too.

Once physically in position they will close one eye and lock-in their view. At the normal cast drawing distance, switching eyes affects the vantage point. So does a slight lean to either side and/or front to back.

You teacher will usually find some dimension on the cast that they know matches your drawing. They will then adjust their position slightly while comparing that known dimension to the part of your drawing. When both match, they’re locked-in and can now begin critiquing.

Shape is paramount. Their initial concern will be with the overall contour or arabesque, something Mr. Gammell called the potato shape.

They may also notice that you’re using your plumb line incorrectly.

For example, when plumbing horizontals beginners often hold their dominant hand too high. This results in a drawing that is not precisely across from the source. It’s either too high or too low, depending upon which side the drawing is from the source and which hand is dominant. If the error is consistent, then slightly raising or lowering your drawing board might be recommended. If it’s sporadic, then correcting the drawing is warranted.

This error may also be evidence of not following the guess and check rule. It shows that you may be preferring the mechanical measurement over your naked eye.

Another check he’ll make is overall size. Most people unintentionally draw too large, though a few do the opposite. If the error is consistent in the drawing and is not too egregious, your teacher might physically push or pull the easel into a new position.

Pushing the easel back a little (away from your vantage point) can solve the problem of drawing too large, whereas pulling it forward helps those who draw too small.

After establishing that you’re in plumb and are drawing at the correct size, other shape errors will be seen and explained. Once again closing one eye, your teacher will likely begin flicking their eye back and forth, looking for what visually jumps.

Whose Drawing Is It?

It is at this point when many teachers will ask for the student’s charcoal stick. I recall being a bit surprised when Mr. Lack first asked for mine. At the time I was in my teens and failed to realize that visual content at times requires a visual demonstration.

As a teacher myself, I’ll draw on my student’s work as a last resort. Other teachers routinely do it. Neither approach is right nor wrong. It’s often situational. Verbally explaining a small change may be enough. But actually showing the student how to best draw a long line or mass an area in might be necessary.

When your teacher walks up to your drawing to point something out you’ll be asked to stand at your vantage point so that you can see what they’re showing you. One of my teachers, Charles Cecil, had a consistent mannerism when he walked forward to the student’s work. Seemingly in one motion he would: tilt his head back (which flicked his hair), swing his arm back towards the vantage point, and walk forward. This was the cue for the student to assume the position.

Depending upon how far along you are with your drawing, next up in the order of a critique is judging the placement and shape of the shadow line (also known as the bedbug line). Although this edge defines the shape of the main shadow, it is not always clearly defined on the subject. Your teacher will show you how best to see it, likely by using your charcoal to cast a shadow across the line which will show the true edge.

If you’re in the massing-in stage, the critique would involve your teacher squinting down so they might correctly judge your attempt at the darkest darks and lightest lights. Those value relationships are important, so your teacher might even mass-in a few little sections of the extremes so as to give you some targets.

Once you’re through massing-in, you (and then your teacher’s critique) would move onto the other value relationships between those extremes.

If you’re near finish, and assuming this drawing was not merely a start, your teacher would determine whether you correctly defined the hierarchy of edges: from the sharpest sharp to the softest soft.

Students commonly make all edges too sharp. Being aware of that, as well as observing it in your drawing, he might turn one of the edges as a example. Doing this would show you that ‘sharp’ edges are relative. You might also learn some charcoal technique by watching him demonstrate.

Hopefully the critique was not at the end of the day’s drawing session so that you can immediately act on what you were told.

As a student, before getting to work I would first write down everything my teachers said to help me remember. Besides helping me in my own studies, those notebooks have been invaluable for me as a teacher.

When it comes to critiquing online students, accommodations must be made. Clearly your teacher cannot actually draw on your work. In my case, I’ll sometimes digitally draw on the photos sent to me by my students. No, it’s not the same as being in person, but it does help.

A bigger issue is assuring that the photos you send your teacher are take from your vantage point. To that end, I’ve written an article about photographing your work for a critique and if you intend to learn online you would do well to read and follow the directions in it.

Even if you attend an atelier in-person, you will have plenty of time on your own. More advanced students sometimes offer help. But be advised. While their suggestions will be far better than from someone with no training, they are still a student.

Your best help will be a fresh eye. And as a part of that, your mirror.