When to Choke the Bâton

Article by Darren Rousar. Most recently updated in August of 2021. 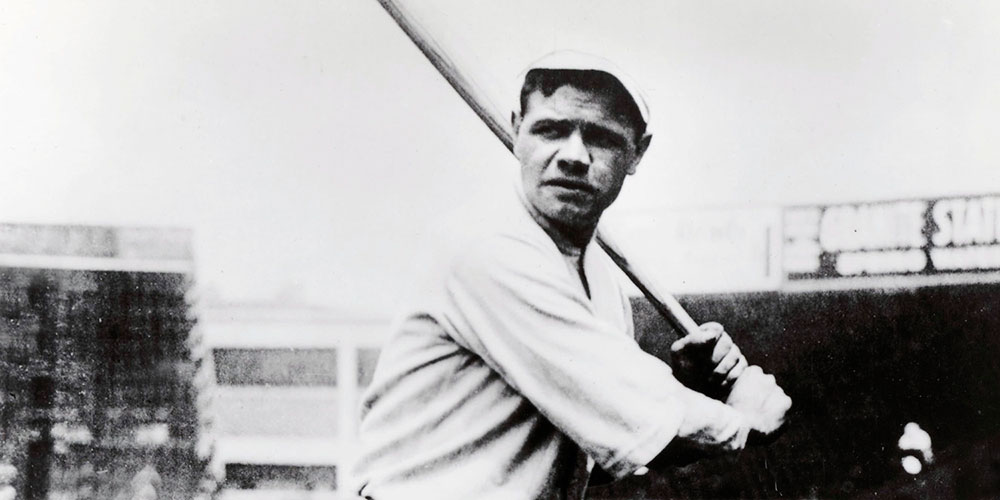 Babe Ruth gripping the bat in the traditional way (1920).

Many children in America learn to play baseball early in life. One of the first principles commonly taught is to not choke the bat. Choking the bat means gripping it too close to the top. But there are situations when choking the bat may be a good thing and some players routinely do it. The way an artist grips their instrument is as important as a baseball player’s grip on the bat. And as in baseball, it’s important to know when to choke the bâton.1

Notice that even though I am being precise I still have a grip that’s far back on the charcoal stick (bâton).
I’m also supporing my drawing hand on a mahl stick. This is as much for support as it is to keep my hand from touching the drawing surface.

You have 27 bones in your hand, 3 in your arm, and 3 in your shoulder.2 Some, and at times all of these bones are used while drawing and painting. One commonality among them is that each bone is part of at least 1 joint. Without joints there would be no movement.

Generally speaking, the larger the joint the greater the movement. Joints also team up to affect even greater movements. A corollary is also generally true: the smaller the joint the more precise are its movements. 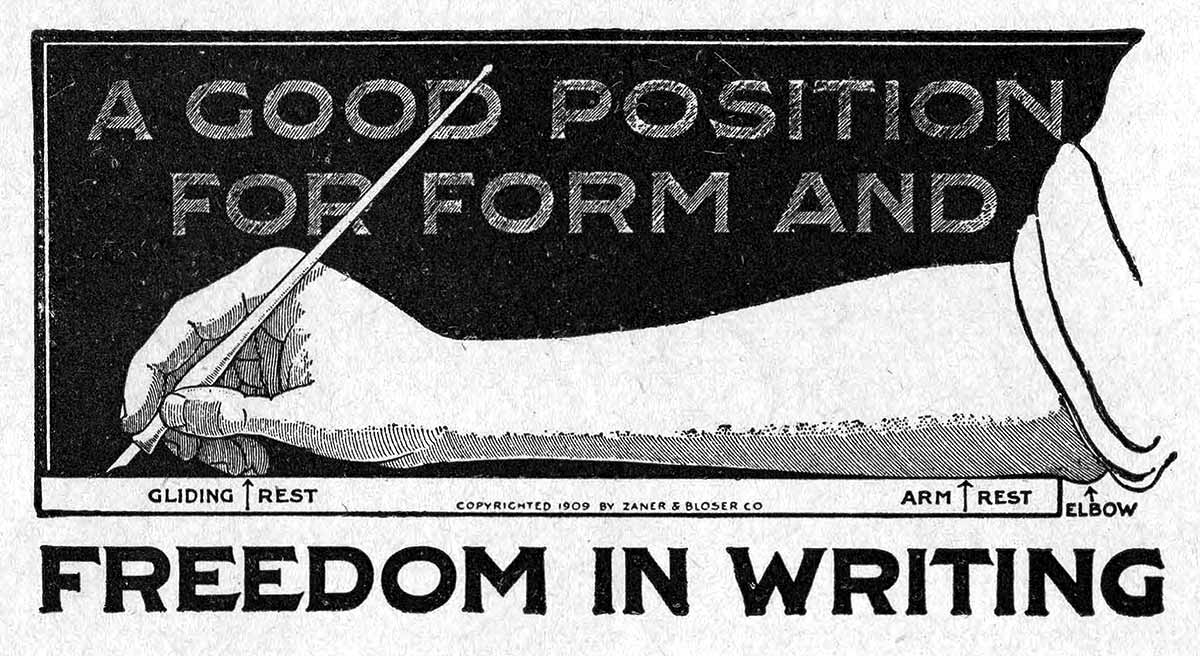 Part of the instruction given when learning how to write your letters is how to hold the pencil. The most common grip used when I was young has been named the dynamic tripod. It still seems quite common, though lately I’m seeing numerous variations among the children I teach (image below). It is perhaps due to the fact that cursive has fallen out of fashion, but that’s pure conjecture on my part. 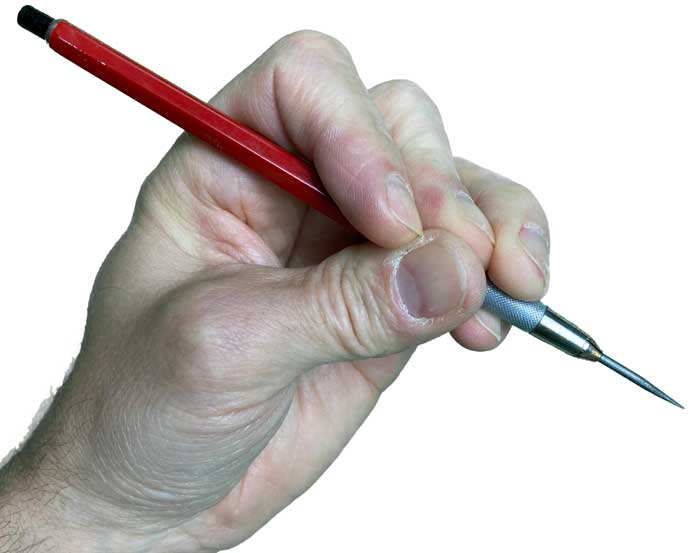 This kind of grip drives me nuts. But if it works for you then . . .

Whatever their writing grip, beginning art students tend to use the same one when drawing and painting. In doing so, they’re choking the bâton.

Perhaps you do too.

There are no rules, but you’ll most often get a better line if you grip your instrument as is shown below. This kind of grip makes it easier to draw and paint with your arm.

Although an unintended warning in the baseball maxim, gripping your pencil or brush too tightly is also something to be aware of. Most artists want graceful lines and strokes. But bearing down on the pencil as if you’re choking the life out of it will result in precisely that – lifeless lines and strokes.

Practice a gentle grip, and one that’s farther back from the tip than when writing.

Earlier I mentioned that small joints produce precise movements. That is what’s necessary for writing as well as fine details when drawing. Of course, writing and drawing have a lot in common. In fact, I probably compare the two in articles on this site a number of times. However, there are differences. Among them is that writing is done mostly by using your fingers to manipulate the writing instrument.

Also, writing is rote whereas drawing is not.

When you write something you’re relying almost entirely on muscle memory to produce your letters. When you draw that is not the case. Drawing and painting require muscle dexterity and control rather than muscle memory.

And yet in both cases, size matters.

Try this set of experiments. Take a pencil and some paper and write the letter ‘a’. Odds are the size of your attempt will likely be far less than 1/2″ tall. That’s fine. Next, draw the same letter large enough to fill the sheet of paper.

Was your large ‘a’ as graceful as your smaller one? Probably not. And did you notice something else? Although it’s a subtle difference in the experiment, you ‘wrote’ the small ‘a’ and ‘drew’ the large ‘a’.

But wait, there’s more. Try the experiment again, only this time pay attention to the physical aspects of what you’re doing.

When writing the letter ‘a’, you used your fingers. When drawing it larger you also used your wrist. If your drawn letter ‘a ‘ was quite large, then your elbow and shoulder likely came into play as well. This is because when it comes to control, size does matter.

Let’s try it once more, only this time reverse the physical process. When writing the small ‘a’ try to do it by using your arm and shoulder instead of your fingers and wrist. Then, try to draw the large ‘a’ by only using your fingers and wrist. The results might surprise you. At a minimum you’ll see that the size of that final drawn letter is limited due to the anatomy of your hand.

Have you ever wondered why paint brush handles are so long? I mean, if your grip is tight and down near the tip, why have an additional 8 to 10 inches of useless wood above it? I’ll get back to that in a moment.

If you’ve done much charcoal drawing you likely know about charcoal extenders. In years past they were made out of brass, split on the ends, around which was a small, sliding ring that keeps the inserted charcoal in place. Now they’re more commonly tubes into which you shove a well-used stick of charcoal. In both cases they have two uses:

Both reasons are related. Though one can hold a stick of charcoal like they hold a pencil while writing, few would. And yet a very short stick of charcoal demands that kind of grip. Such a grip might be fine (and even necessary) if you’re rendering an eye on a figure drawing. But that grip would be a hinderance when delineating the model’s leg.

Drawing the eye uses the fine motor movements of your fingers. But to get the graceful sweeping line of the leg requires the larger joints in your wrist or arm.

That brings us back to brush handles. Numerous masters are known to have used long-handled brushes, among them Titian and Velazquez. Some, like Sargent, worked in Sight-Size. Others like Sorolla did not. 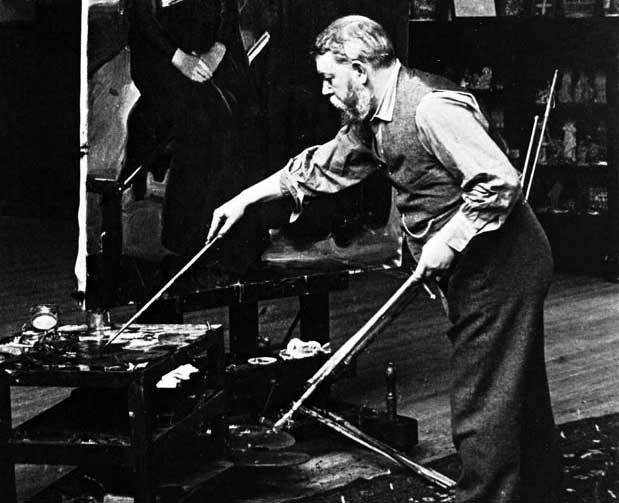 Sorolla in 1911. I have definite brush envy.

Pictured above is the Spanish artist Sorolla. Now those are long brushes!3 Notice too that he’s gripping the brush way back at the end. This implies that he’ll be using his entire arm to paint, rather than just his fingers.

Why would he do that?

Part of the answer takes us back to our experiments. A close grip is often best for precise rendering (as in writing the letter ‘a’). Whereas a grip that is farther back on the handle can be more helpful when working on larger areas (as in drawing a large letter ‘a’).

Using a grip that’s farther back on the brush (as well as using long-handled brushes) also puts some distance between you and your artwork. While it is not a heroic distance, it still helps to keep you from falling into the trap of piecemeal seeing.

I’ve not found a manufacturer that makes quality long handled brushes like those Sorolla used. However, there is a simple work around that let’s you use your current brushes.

Much like a charcoal extender, a thin bamboo stick allows you to lengthen your brush. I’d suggest cutting the sticks down to a foot long or so. Then, simply shove the handle of your brush into one end of the stick. You might need to wrap some tape around the intersection so that your brush does not fall out. Gardeners use bamboo sticks to help support taller plants and most garden supply stores will stock them. Before you buy, make sure that the holes which run through the stick lengthwise are large enough for your brush handles.

Overall we tend do best while doing things in the way we’re used to. If you’re used to choking the bâton, trying a grip that’s farther back may fail at first. Persevere and after a while you’ll improve. I recommend beginning with block-ins for drawings and lay-ins for paintings, moving to a closer grip as the artwork gets more detailed.

1 Bâton is the French word for stick.
2 The scapula, clavicle, and sternum.
3 But don’t assume that Sorolla and the other artists always used long brushes. There are plenty of photos showing him using brushes with shorter handles as well.