Article by Darren Rousar. Most recently updated in June of 2020. 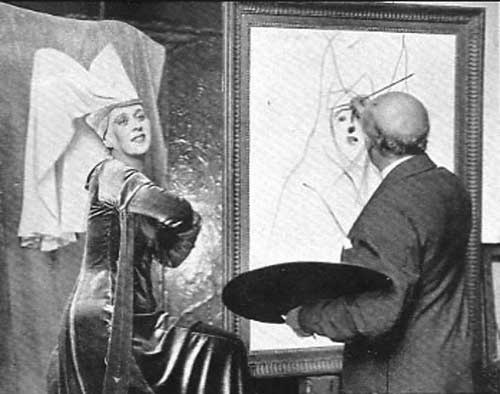 Philip Alexius de László was an Hungarian artist, born in 1869. At age 15 he was apprenticed to a portrait photographer and at the same time he attended art school. He would eventually attend the National Academy of Arts in Budapest, the Royal Bavarian Academy of Art in Munich, and the Académie Julian in Paris. Although he began his career as an historical painter, he is best known for his portraiture of early twentieth-century English and American socialites. He had a bravura style of brushwork which fit well with his contemporaries (and competition), Sargent, Sorolla and Zorn. 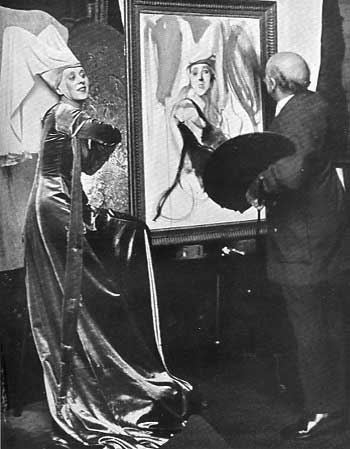 The images above are from the book, Painting a Portrait, Philip de Laszlo, by A. L. Baldry. It is occasionally available on Amazon, here. If you cannot find a copy, or it’s too expensive, don’t fret. Most of the book is online, here, thanks to John Howard Sanden. The book is presented in a question/answer format between the author, Baldry, and László. 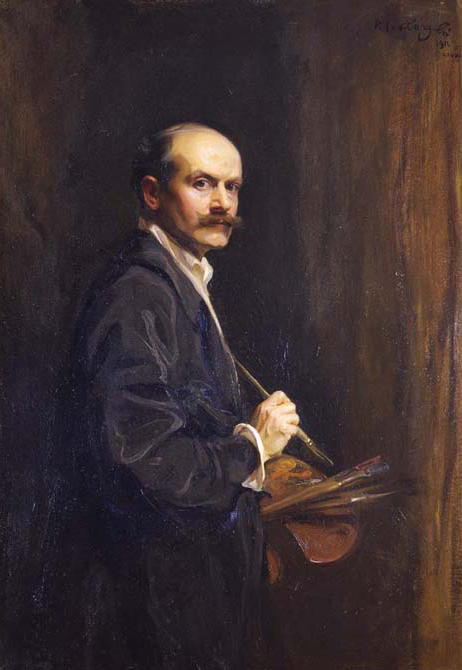 De László painted a portrait of George Eastman in 1926. This film (above) was shot using a camera given to de László by Eastman. The film shows many aspects of Sight-Size, from the eventual placement of the canvas (relative to the model) to de László’s standing back into a distant viewing position.

The canvas in the film starts out too high on the easel. At about three minutes in, the canvas is mysteriously lowered into a position which puts the image on an even level with the model. De László also “sneaks a peak” at the model when he’s up near the canvas a bit too often. But who knows, perhaps he was nervous being filmed? Nonetheless he travels back into the main position enough times to lock her in. When questioned by Baldry, in the book mentioned previously, de László comments on his viewing distance and in so doing describes much of the process of Sight-Size:

Q: There is one question I have been waiting to ask you—why do you take so much exercise while you are painting? Why do you move backwards and forwards so incessantly?
“Well, as you see, I set my canvas beside my sitter, but what I put on that canvas I judge from a certain distance. I must go fairly far off to see the general effect of my subject as a whole in all that rightness of relation upon which I insist so much. When I stand back I am recording mentally what I am going to put on my canvas when I walk up to it.”

Q: Really, one might say that you paint your picture while you are away from your canvas.
“In my mind; yes, I do. What I put on with my brush is considered and settled before I touch the picture, so much so, indeed, that I do not look at my sitter when I am close enough to put that touch on the canvas. How do you think I could judge the texture of any material if I were near enough to it to put my hand upon it? I must be sufficiently far off to appreciate properly the characteristic tones and values by which varieties of texture are made apparent.” 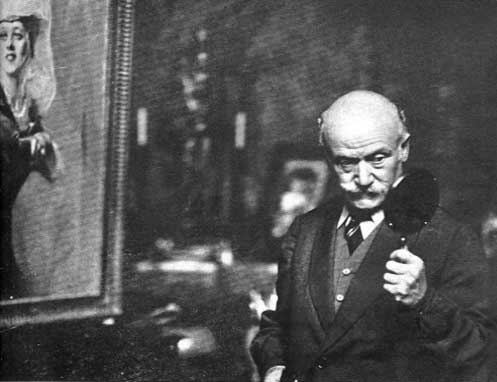 Notice de László’s use of a hand mirror, above, as well as a larger studio mirror, here.

In the aforementioned book, Baldry questions him about the use of the mirror:
Q: Does that little mirror you keep looking into help you to decide what you are going to do?
“Yes, to some extent it does. But its chief value is that it gives me a new view of both picture and sitter and therefore enables me to discover any faults there may be in drawing, or in the relations of tones. It acts like the fresh eye which can often perceive defects that the painter, having got accustomed to them, has failed to detect. I take a look in the mirror from time to time as a sort of self-criticism. At any rate the mirror is an honest critic.” 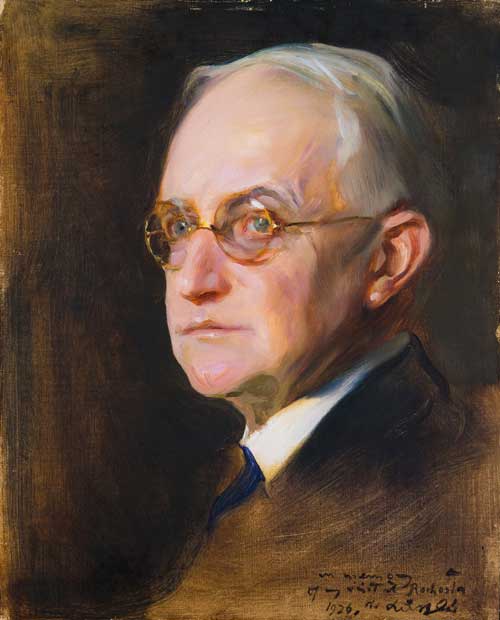 Portrait of George Eastman, by de László. Besides founding the Eastman Kodak company,
George Eastman invented the “roll film,” without which motion pictures like the one above could not have been made.

There is more information about de László at the De László Archive Trust.