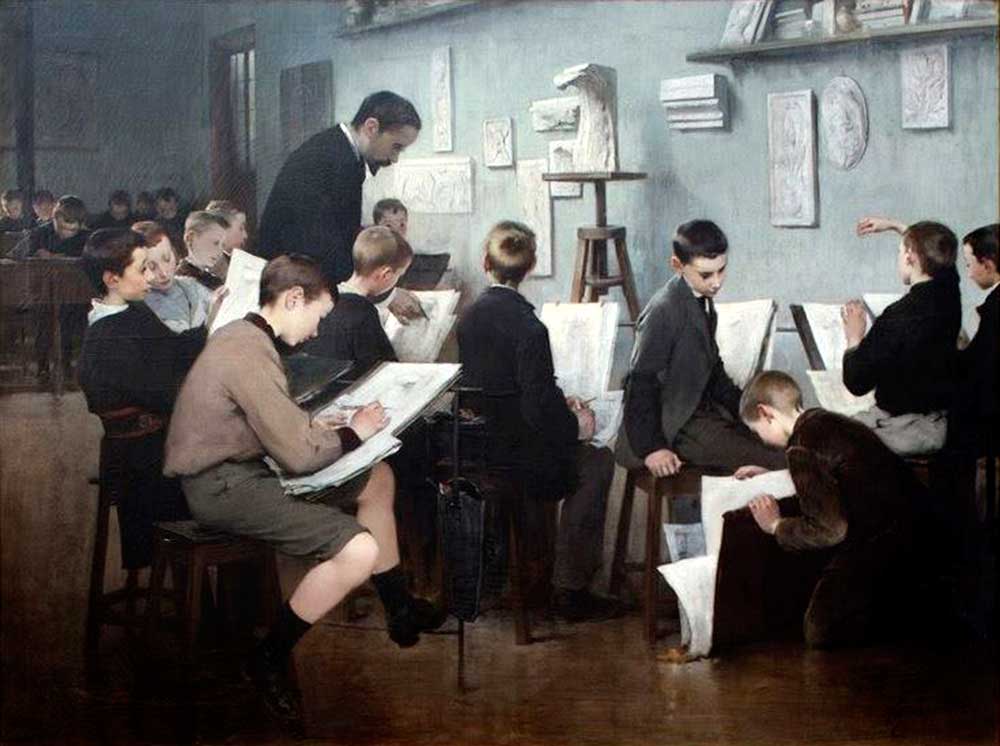 Henri Jules Jean Geoffroy, A Drawing Lesson in Primary School (1893).
These students are drawing the cast which is in front of them on the pedestal. They are using Comparative Measurement.
Notice the student on the right, holding a plumb line.

Although some may prefer to always work in Sight-Size, not all do or are able to all the time. Furthermore, not every subject or scene lends itself to the Sight-Size arrangement. In those cases the only other option is Comparative Measurement. Scaling your drawing (which is what Comparative Measurement is) should be no trouble for you if you’re skilled in seeing through Sight-Size.

Since Comparative Measurement it is a distinct skill, however, it only makes sense to train that ability. And once you do, you’ll have gained a comparative eye.

I previously explained the differences between Sight-Size and Comparative Measurement in another article, but with this one I also present some ideas for how you can train your comparative eye.

Given those differences, Comparative Measurement is more properly termed either proportional drawing or scaled drawing. Other terms are used now and then as well, like comparative drawing. But whatever the term, they all define the process of drawing your subject at a different size than you see it. Since clarity is more important than pedantry, I’ll stay with convention and use the term Comparative Measurement which is what it is most commonly known as.

To Compare is Human

When you are drawing from a visible source (that is, not one from your imagination), you are comparing. That’s true for both Sight-Size and Comparative Measurement. In fact, all drawing and painting from a visible source relies on comparison. Both approaches allow artists to represent what they’re seeing and to that end both require an accurate eye. But there is one major difference.

The difference is scale. 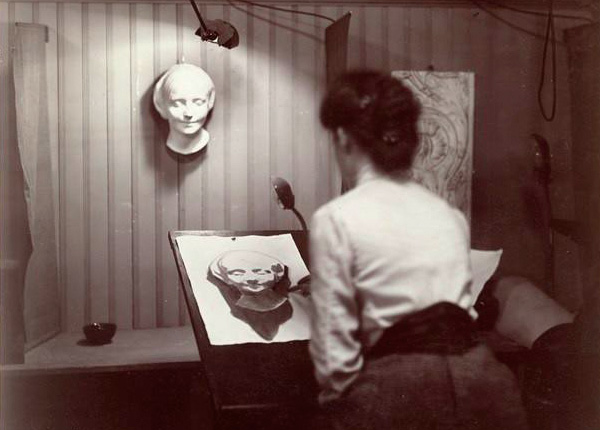 A student drawing a cast using Comparative Measurement at the Boston Public School of Art (1890).

Scale is another word for size. It is both the perceived size of your subject as well as the actual size of your artwork. When comparing in Sight-Size, the comparisons are direct: one-to-one, this equals that. The scale is the same. If you are creating your artwork in the same visual size as you see your source, then you’re in Sight-Size.

But, when comparing using Comparative Measurement the scale is not one-to-one. Instead it is a proportional sum: this does not equal that because your subject and your artwork are not at the same visual size.

The scale is different. 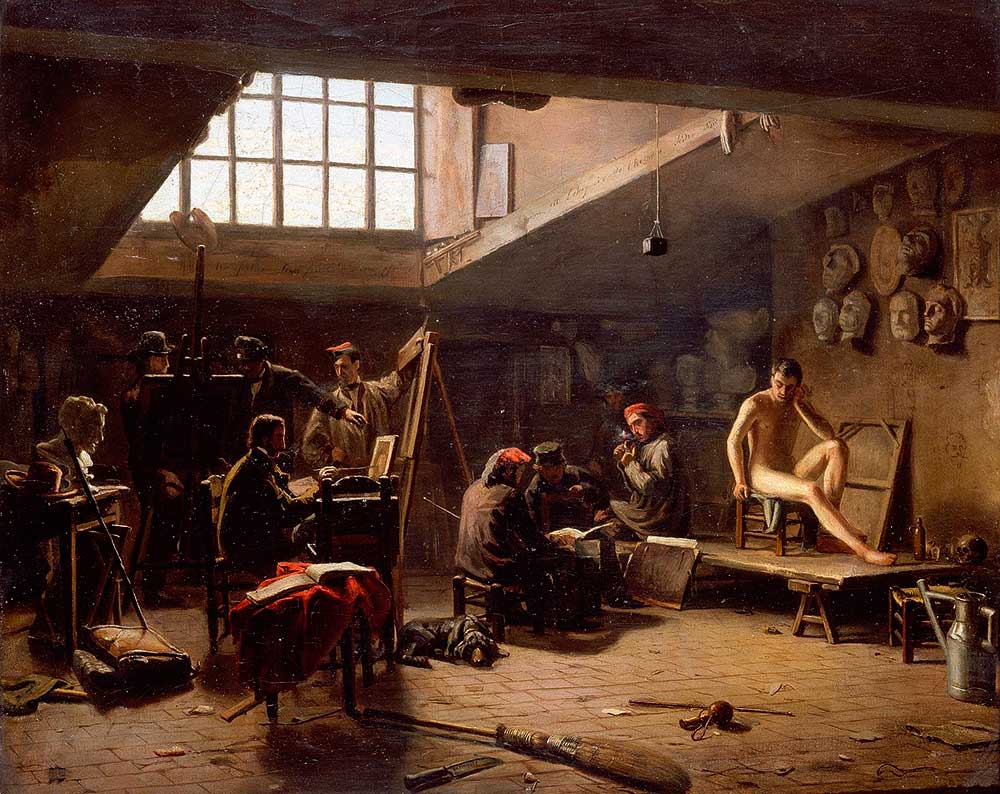 The principal factor in determining the scale when comparative measuring is usually whatever fits within the chosen boundaries. When figure drawing in school, that’s often slightly smaller than the size of your paper or canvas. In that case the scale is the proportion between the observed size of your subject and the boundaries on your artwork.

The scale might be reduced down from your source or enlarged up from it. It can also be at any proportion.

Most who work in Comparative Measurement have no idea what the numerical ratio is for the proportion at which they are scaling their artwork. Why? Because the key to success when comparative measuring is not really the scale being used. Rather, it’s using the scale consistently.

Imagine drawing a figure that for the sake of discussion is one third larger on your paper than what you see in nature. You determined that by arbitrarily placing light pencil marks just inside the top and bottom of your paper. By measuring with your thumb on your pencil you also determined that the figure is seven head-lengths in height.

Ideally, each succeeding measurement would accurately reference that head dimension. If any do not, then those parts of your drawing will be out of proportion.

In other words, in error. 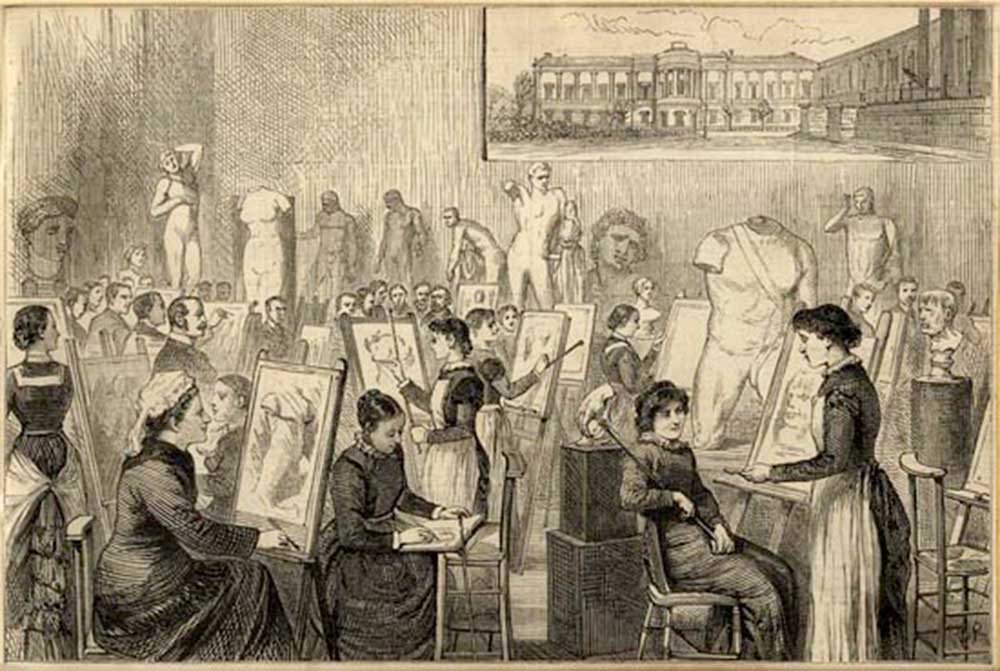 Why Train Your Comparative Eye?

Then again, scaling is an extra step. And when steps are added to your normal process the potential for introducing errors is greater.

When you’re not solely relying on your naked eye, that probability is compounded by the fact that your measuring instrument is often as was described above: your thumb on your pencil. That’s a problem due to their size when compared to your subject out in the distance. If your thumb is off by a fraction of an inch as viewed at the end of your outstretched arm, that error enlarges exponentially once your vision of it gets out to the figure that’s on the platform fifteen feet in front of you.

Although a similar problem occurs when in Sight-Size and mechanically measuring, a simple flick of your eye quickly resolves the issue. Flicking your eye between your source and a scaled drawing of it is much less effective.

As an aside, that’s why the Guess and Check is so important, whether in Sight-Size or when Comparative Measuring. 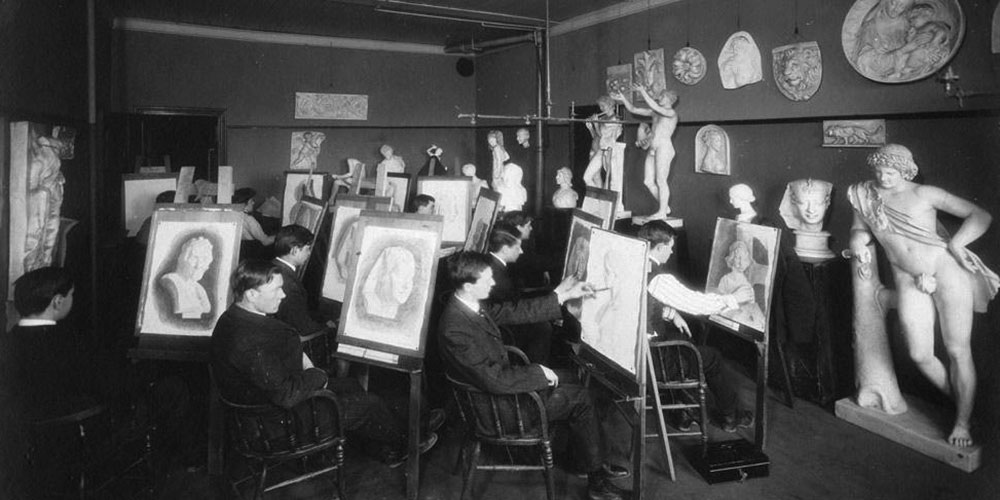 Regardless of what you’re trying to train, the simple act of attempting it over and over again will eventually train it. But relying on that is so old school, especially when you’re learning on your own.

Better, is to hack your training.

Hacking your training is done by separately and progressively training discrete areas of the larger process. When it comes to Sight-Size, that means practicing reproducing simple shapes in their exact size. Over time the shapes would become more complex and perhaps larger. And while you can do it entirely on your own, I provide numerous exercises to help you in the book An Accurate Eye.

As you might expect, doing exercises with your subject and artwork at a one-to-one scale will not do for training your comparative eye. Instead, you need exercises that ask you to scale the images proportionally – at times reducing and at other times enlarging. For example, you might draw a few rectangles and then attempt to reduce or enlarge them by a third, using only your eye to find the scaled dimensions.

You’ll also need a way to confirm that your scaled attempts are accurate. That way is a standard or a key.

When in Sight-Size your subject and drawing are at a one-to-one scale, so your subject is also your standard (or key). That cannot work when comparative measuring because the scales are different. Therefore, you’ll need to check your attempt by using a key that is not only in perfect proportion to your source, it also has to be at the exact size of your drawing.

Here again, you can train your comparative eye entirely on your own by creating simple and progressively more complex exercises along with their keys. But why do that when I can help? That help is what I present in the book, A Comparative Eye. 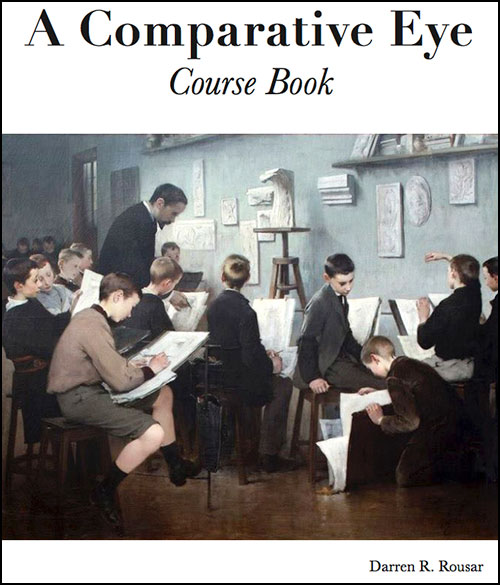