Article by Darren Rousar. Most recently updated in October of 2020. 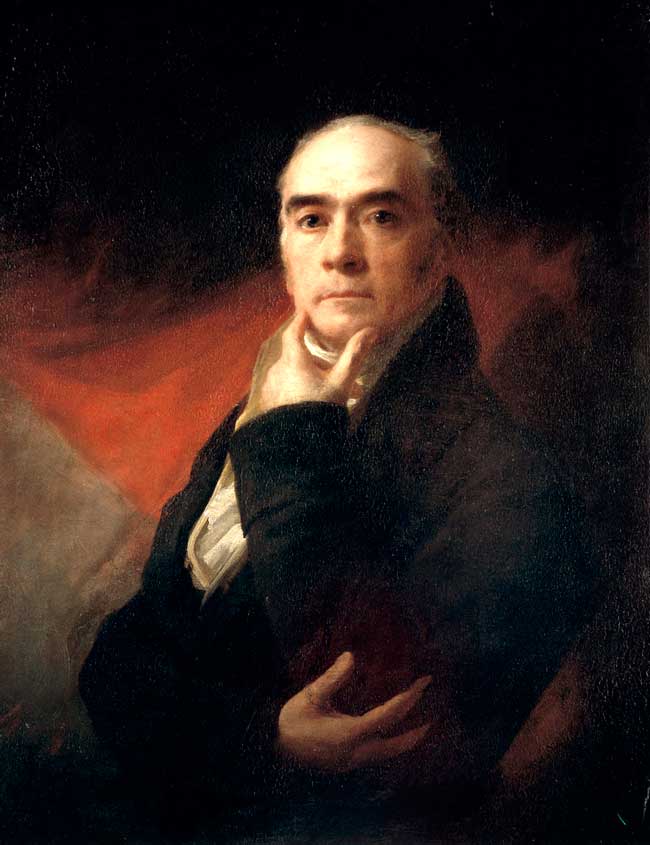 One early proponent of Sight-Size was Scottish painter Sir Henry Raeburn. The most extensive biography on Raeburn is Edward Pinnington’s Sir Henry Raeburn, R.A. Written in 1904, it is still the most often quoted when it comes to writing about Raeburn’s painting technique.

The following passages are of particular interest (from pages 122-126 of Pinnington’s book). Italics are Pinnington, regular text is mine.

“One sitter innominate writes, ‘He spoke a few words to me in his usual brief and kindly way, evidently to put me into an agreeable mood, and then, having placed me in a chair on a platform at the end of his painting-room, in the posture required, set up his easel beside me with the canvas ready to receive the colour. When he saw all was right, he took his palette and his brush, retreated back step by step, with his face towards me, till he was nigh the other end of the room; he stood and studied for a minute more, then came up to the canvas, and, without looking at me, wrought upon it with colour for some time. Having done this, he retreated in the same manner, studied my looks at that distance for about another minute, then came hastily up to the canvas and painted a few minutes more.'”

Anyone who has ever seen students working in almost any atelier stemming from R. H. Ives Gammell will immediately recognize Sight-Size in the quote above.

“I had sat to other artists; their way was quite different – they made an outline carefully in chalk, measured it with compasses, placed the canvas close to me, and looking me almost without ceasing in the face, proceeded to fill up the outline with colour. They succeeded best in the minute detail [but] Raeburn [was] best in the general result of the expression; they obtained by a multitude of little touches what he found by broader masses; they gave more of the man, he gave most of the mind.” 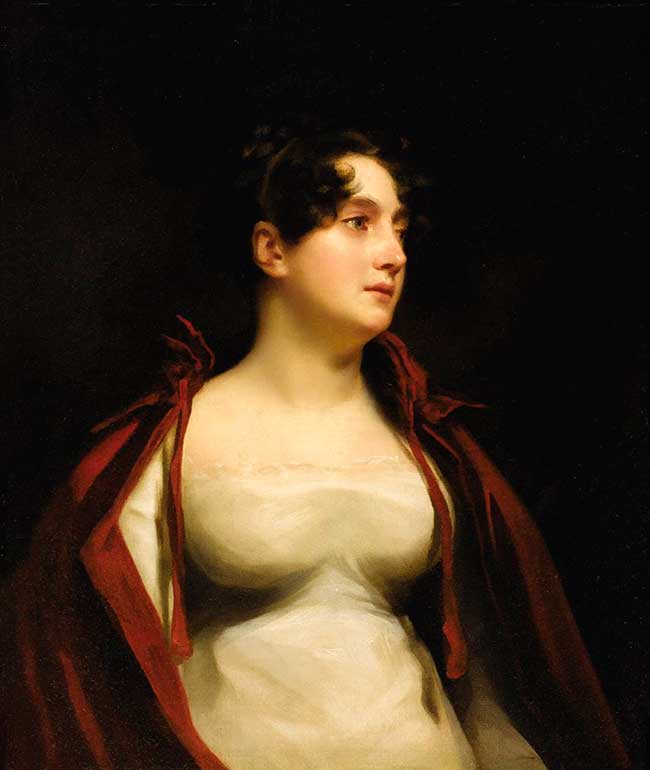 “His manner of taking his likenesses explains the simplicity and power of his heads. Placing his sitter on the pedestal, he looked at him from the other end of a long room, gazing at him intently with his great dark eyes. Having got the idea of the man, what of him carried farthest and ‘told,’ he walked hastily up to the canvas, never looking at his sitter, and put down what he had fixed in his inner eye; he then withdrew again, took another gaze and recorded its results, and so on, making no measurements. His hands are admirably drawn, full of expression, and evidently portraits.”

Ditto my comment above. Notice though that the sitters Pinnington quotes seem intrigued by the fact that Raeburn did not measure. However, it is clear that the ‘measuring’ they were looking for was mechanical (with compasses and so forth)1.

Does this mean that measuring is wrong? Of course not, as you can read about in The Only Cure for Measuring.

I tell my students the same thing I was told: first, measure by eye alone. Only after that should you check your eyeballing by using a plumb-line. This process is called the Guess and Check. Over time, and with lots of practice, you will find that your naked eye measurements become as accurate, if not more so, than the plumb-line.

Part of what makes Raeburn’s portraits so powerful is their accurate broadness. He achieved this, not by getting in close and measuring with a divider, but by using his highly trained eye to judge distances, relationships, value, color and effect. Accurately doing that is far easier when the canvas and sitter are next to each other and the two are viewed from a distance, than when your canvas and the sitter are on different visual planes. 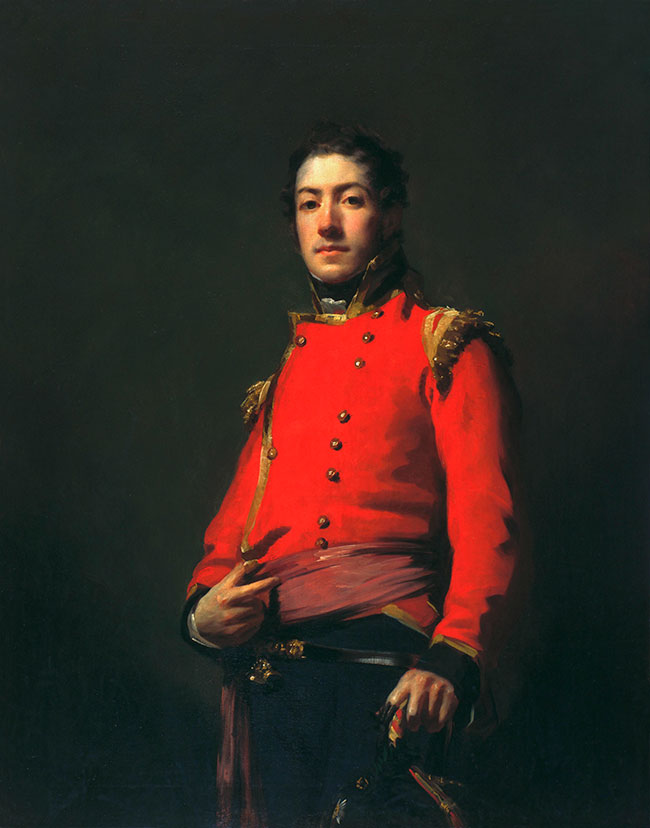 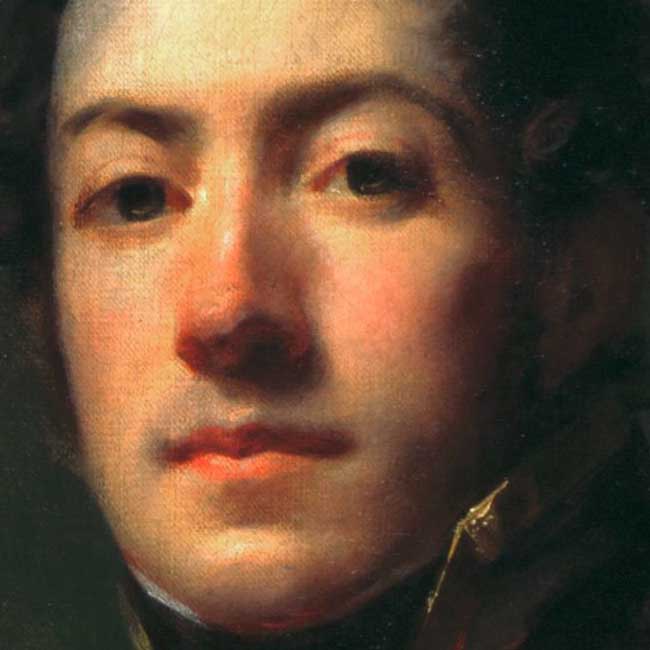 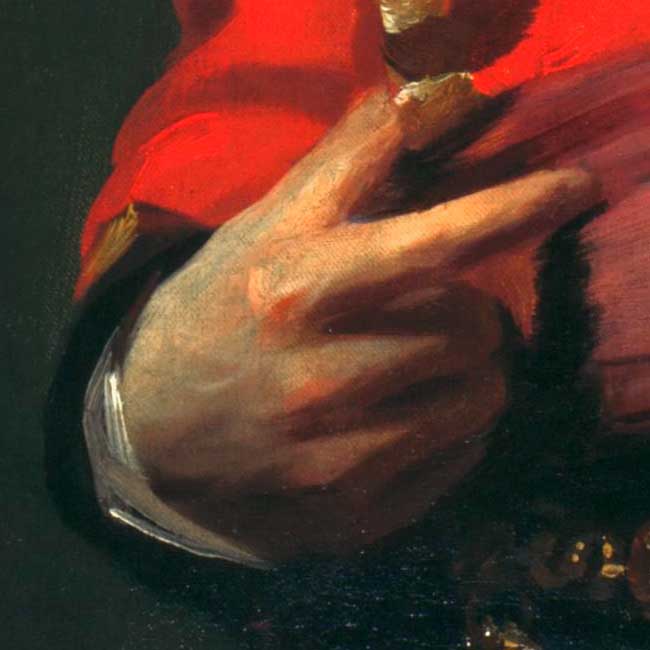 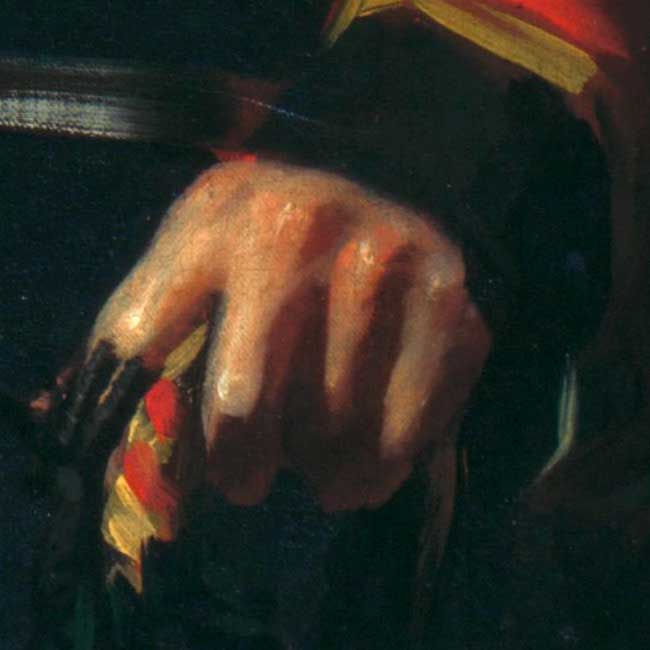 Sir Walter Scott related much the same thing as the other sitters when asked about his own experience when sitting to Raeburn:
“His conversation was rich, and he told his story well. His manly stride backwards, as he went to contemplate his work at a proper distance, and, when resolved on the necessary point to be touched, his step forward, were magnificent. I see him, in my mind’s eye, with his hand under his chin, contemplating his picture; which position always brought me in mind of a figure of Jupiter which I have somewhere seen.”

You too can see Raeburn as Scott did, with his hand under his chin, in his self portrait at the top of this article. 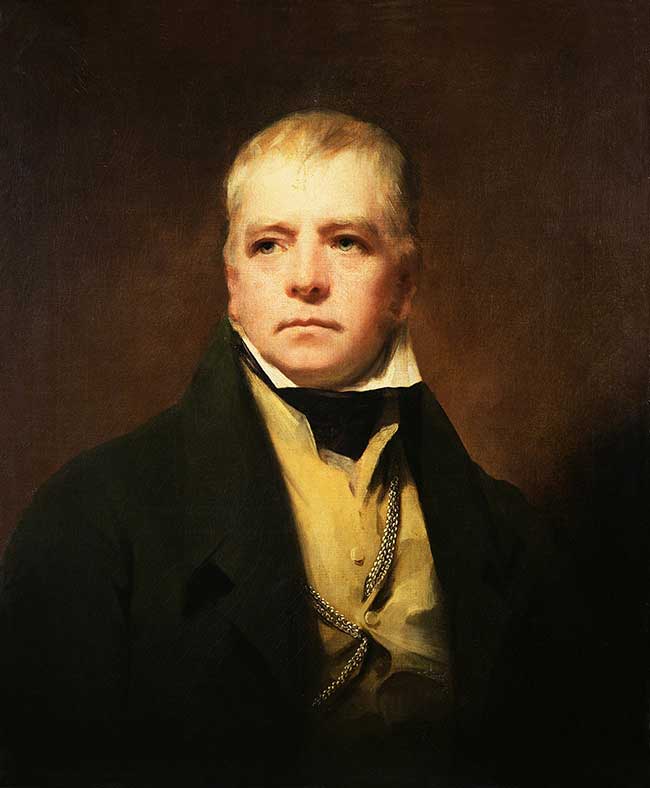 Finally, Pinnington quotes R.A.M. Stevenson, who, besides writing the book on Velazquez, also wrote a lengthy forward to Walter Armstrong’s 1901 book on Raeburn.2

“His method may, on Stevenson’s suggestion, be reduced to a formula:

“The difficulties of such a method are more obvious than its advantages, and yet the latter are great. Its simple directness made for naturalistic truth. Neither was time thrown away upon preliminaries, nor was the painter’s first fresh enthusiasm allowed to evaporate while they were being performed. Having read as well as posed his sitter, he did not allow the first sitting to pass without stating the conception he had formed of his subject-model, and indicating the general artistic effect he intended to work out of the facts before him.”

1 I think it safe to assume that in a practical sense ‘compass’ means ‘divider’. Measuring using a divider is done in one of three ways:

2 If you’d like to read Stevenson’s forward for yourself, click here.
3 This should be clear but is perhaps not. Raeburn placed his canvas next to his sitter. Usually they were physically side-by-side. The resulting painting would have then been life-size. On occasion he placed the canvas a bit behind the sitter, but still visually next to each other when seen from a distance. In those cases the painting would be over life-size. He then retreated back in order to view both at once. The impressions committed to memory that Stevenson references are what is necessary when your canvas is not within arms length while viewing your model. When working in Sight-Size, as you travel forward to the canvas you need to recall from memory what you have seen in order to paint it. As Scott intimated, Raeburn’s process, like Sargent‘s, was characterized by numerous dashes back and forth.