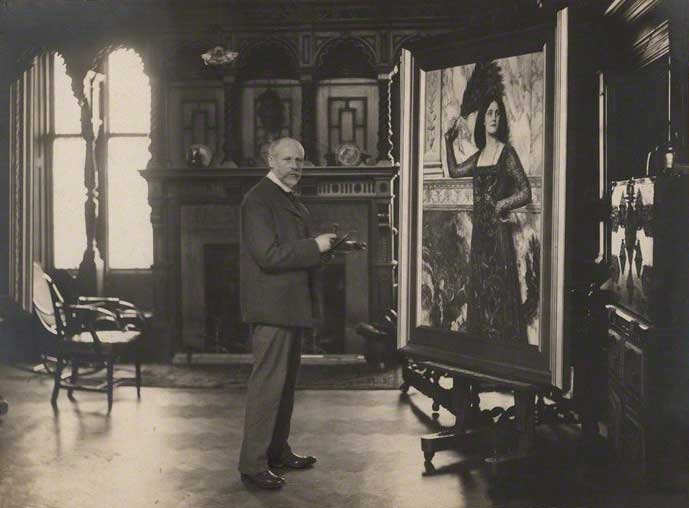 John Maler Collier (1850-1934) studied at The Academy of Fine Arts in Munich, Germany and at the Slade school under Edward Poynter. He was a respected portrait painter and painted many of the famous people of his time.

He also painted a number of imaginative paintings – scenes of mythology and legend. 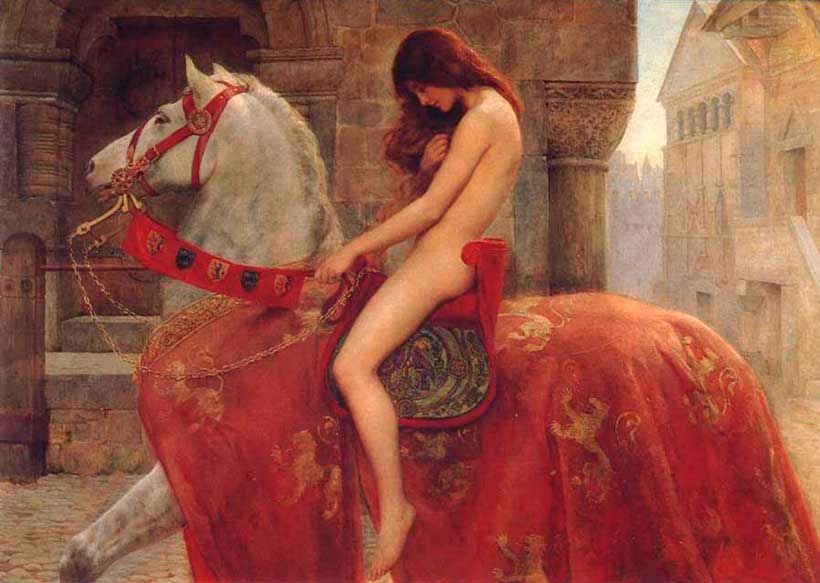 Presently he is less well known as an artist and his current fame rests largely on two of his books, The Art of Portrait Painting and A Manual of Oil Painting.

The importance of these books cannot be over-stated, especially, A Manual of Oil Painting. In this book, Collier lays out a method of painting followed by many of his contemporaries, among them, the Pre-Raphealite painter, John Everett Millais. We call this approach Sight-Size. 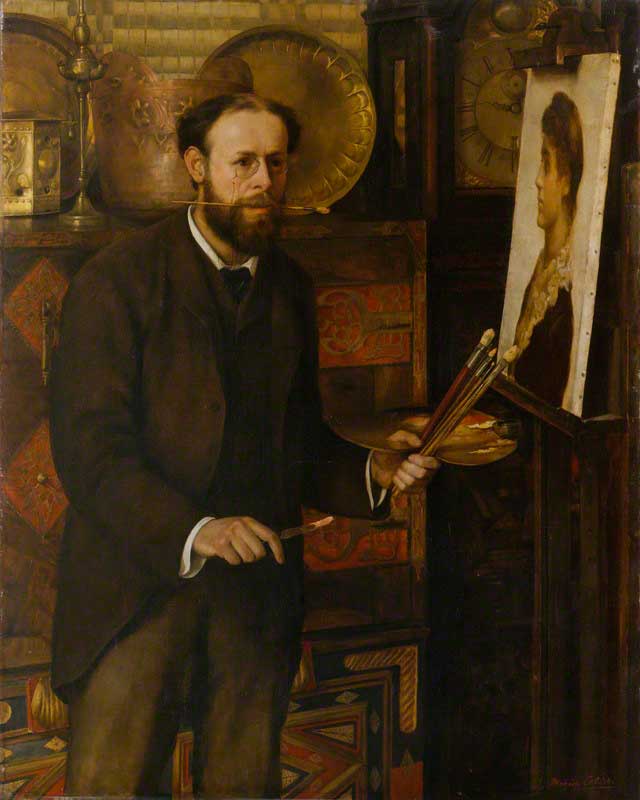 For the rest of this article, I shall quote liberally from the book.

I have already mentioned the method pursued by Sir John Millais: that of putting the canvas side by side with the object, and walking backwards and forwards between each touch. Now, in many ways this is an admirable method, and is particularly well adapted for students, on account of the direct comparison that it gives between the picture and the object painted. . . Every touch that is given by this method has to be applied by memory, and not by direct observation,* for the painter can only see his object properly when he is away from the canvas. He then walks up to his canvas, puts on his touch, and comes back again to see if it be right.

Regarding the setup and viewpoint while painting, Collier recommends:
“From time to time the picture should be placed side by side with the object, so that they can be looked at together from the end of the room. This is supposing the picture to be of the size of life; if it be under life-size it should be placed at that point in front of the object where they both appear of the same size when looked at from the end of the room. When the two, picture and object, are thus seen side by side, it must be a very dull eye that cannot distinguish inaccuracies.”

Why draw and paint in this way?
Because, “This is the most potent aid to self-improvement; by continually resorting to this method the student can be his own teacher, and correct his own faults. It should be employed from time to time throughout the whole progress of the painting.” 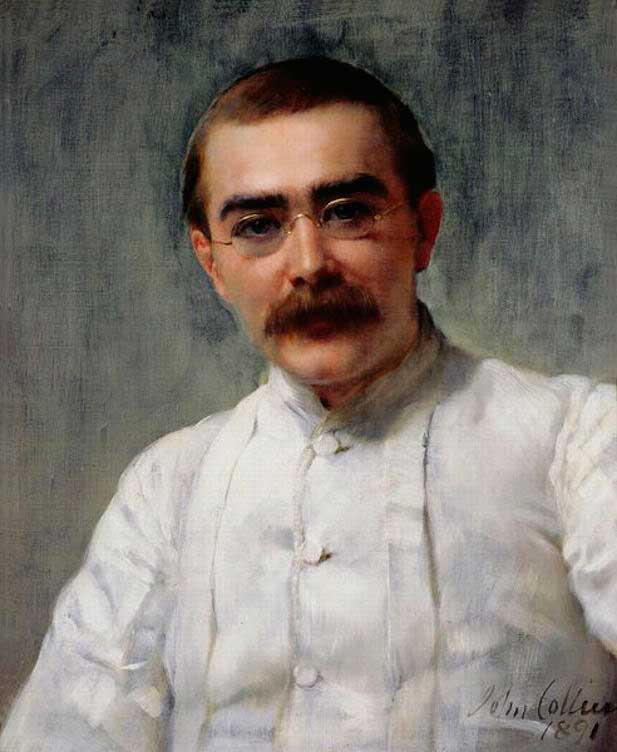 Twice now we have read Collier stating that placing the picture side to side with the object is to be done from “time to time.” But that is not a restriction, nor was he only speaking to students:
“Indeed, it is quite possible to leave the canvas permanently side by side with the object, and to walk backwards and forwards from the end of the room during the whole course of the painting, giving a touch or two at a time, and always going back to see if it be right. This method is much less tedious than it seems; and that it is capable of giving good results is abundantly proved by the fact that Sir John Millais never paints in any other way.”

If you go back to the block quote and read it again, you’ll see that I’ve extracted something out, putting in an ellipsis instead. The missing portion is:
“But it has serious drawbacks; the chief of which is that it leads to a certain looseness and sketchiness of touch, which is certainly not advisable for a student, however charming it may be in the hands of a master.”

What I find interesting is his assertion that this way of painting has serious drawbacks. That’s odd because, in the present-day ateliers that use Sight-Size, it would be hard to find student paintings which are loose and sketchy. More often, atelier work is criticized for being too tight and almost photographic.

We must bear in mind the fact that Collier lived in a time when Sargent, László, Boldoni, Zorn and Sorolla where the premier portraitists. Many of these artists painted using Sight-Size, in part because they were taught that Velazquez had, and their results were often loose and sketchy. Collier’s preference was a tighter finish. His earlier connection between Sight-Size and Millais also tends to negate his warning as Millias was not known for his sketchiness.

My point is that whether a painting is loosely or tightly finished, it has very little to do with whether it was done in Sight-Size or not. 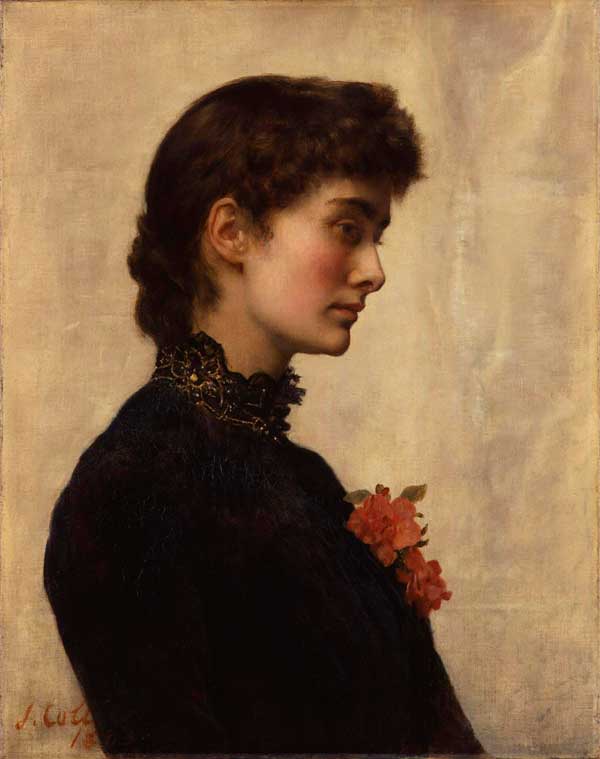 He also recommended ample the use of the mirror.

“A large upright one should be kept in the painting room, in such a position that both the picture and the object can be seen in it at the same time. The special usefulness of a looking-glass consists in this, that the most difficult errors to detect are those which come under the head of obliquity that is, there is a continual tendency to draw things a little askew; but when such drawings are seen in the glass the obliquity is precisely reversed, and strikes the eye the more forcibly the more it has become accustomed to it.”

Furthermore:
“Quite apart from this, the advantage of having a fresh view of one’s picture such as the looking-glass gives cannot be over-estimated. In painting, as in everything else, there is a fatal tendency to become accustomed to one’s faults. There is nothing like seeing them from a different point of view to give renewed freshness to one’s pictorial conscience.”

It is the rare student who has the studio space which can accommodate a large, mobile mirror.
Instead, use a hand-held one. 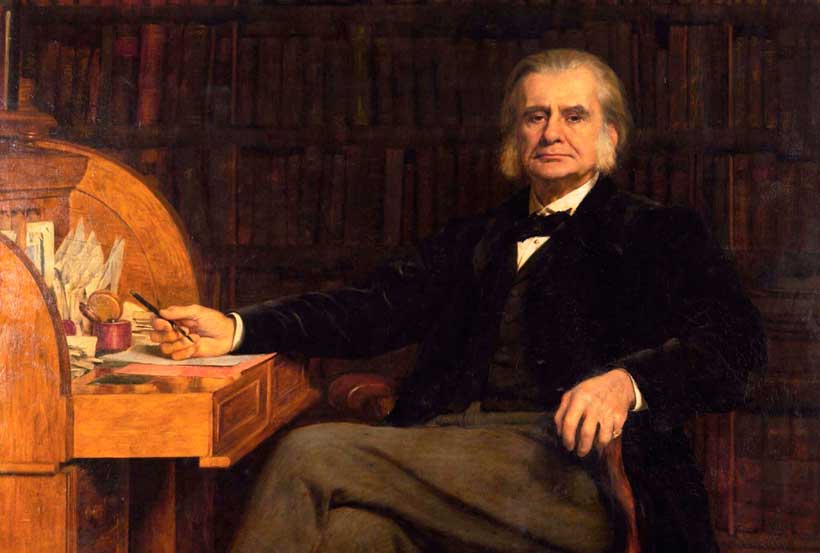 This is not to say that Collier recommended everything that is common in today’s Sight-Size ateliers. He was not a fan of the block-in even though some of his contemporaries were.

Collier’s take was this:
“I think myself it is a mistake to draw things so very differently from how one sees them. A curve should be drawn as a curve from the very beginning; but, of course, the minor details should be left till the last. The first sketch should be a bold rendering of the principal lines, giving the general curvature but neglecting any minor sinuosities. This should be corrected until all the proportions and positions are right. The lines should then be hall rubbed out and carefully re-drawn, the minor sinuosities being put in, and the whole line thoroughly studied with regard to its sweep and curvature.”

For other views on whether to block-in using facets or curves, see this post, here.

[W]e should never disdain any aid to accuracy. Wherever it is possible, actual measurement should be used … But, as a rule, [mechanical aids] will scarcely be found necessary if the student avail himself of the accuracy to be gained by placing the canvas side by side with the object.

He does talk about plumb lines and angles but prefers to have the student rely on their own vision.

I tend to tell my students to sight first and then measure to check for accuracy (the Guess and Check). With that in mind, the plumb line rarely leaves their hand but they are improving their eye’s accuracy along the way. R. H. Ives Gammell, the principle teacher of two of my own, had a saying, “the only cure for measuring is more measuring.” In other words, strive for accuracy, especially as a student. 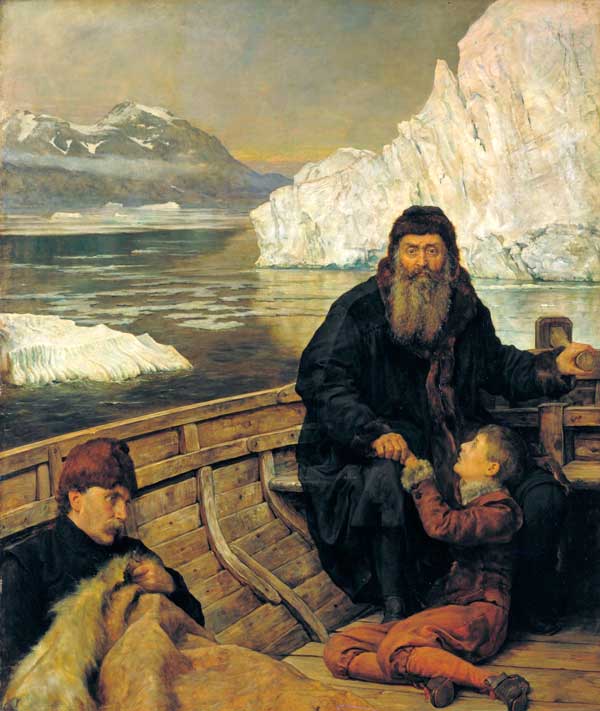 As mentioned earlier, Collier created numerous paintings from his imagination. Of this practice, he wrote to the student:
“If action is required no model can possibly take up the right position for more than a very short space of time, if, indeed, it be possible to take it up at all. The artist must get an intelligent model, and work as best he can from momentary glimpses. He must give the model plenty of rest, and trust more to his memory than to actual copying.” 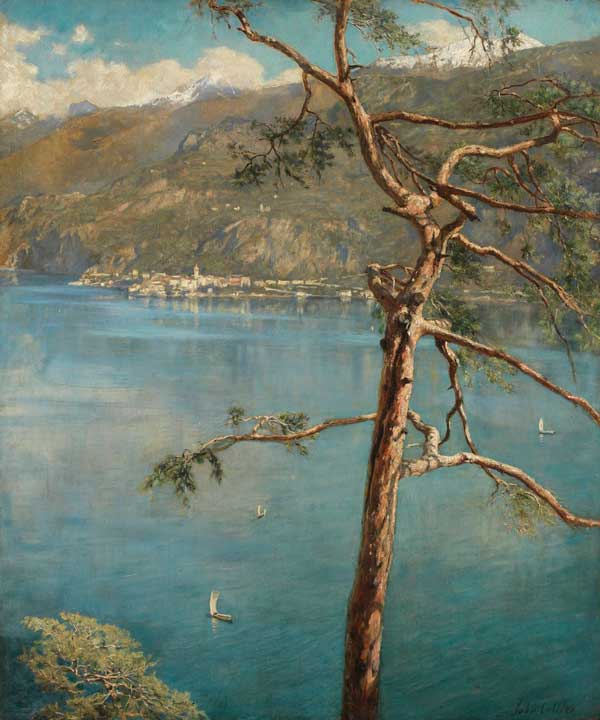 It is interesting to note that Collier seems to have divided landscape painting into two camps. One camp concentrated on capturing evanescent effects, painted from studies, memory and knowledge. The other sought more of a portrait of a scene, where effect is less important than form and local color. Those in the latter camp were the ones to paint en pleinair. His example for the first was Turner, and for the second, Millais.

This division, of course, negates or ignores numerous other motivations. For some, his explanation of the process is mixed up. As an example, American Impressionists concentrated on capturing evanescent effects and often painted large, finished paintings en plein air.

Nevertheless, his connection between capturing those effects and memory work is sound. It is the way George Inness, among many other landscape painters, worked.

*Collier’s comment (in the first block quote of this post) is interesting for an additional reason and it’s a bit semantic. As I read it, he means that while you are painting at the canvas, the result from that position is irrelevant. Your direct observation of the painting is impossible because its source observation and, therefore, its proper viewpoint, is really farther back from your painting position. As such, you cannot directly observe the painting until you stand back. To me, this aspect of Sight-Size bolsters his contention that one’s visual memory is at work. However, in current terminology, standing back as one does when Sight-Sizing is direct observation (it is also direct comparison, as Collier calls it). The opposite is either painting from one’s head (conceptual), using learned construction principles or proportions.